As mass shootings rise, high-capacity magazines should be the focus of lawmakers, experts say 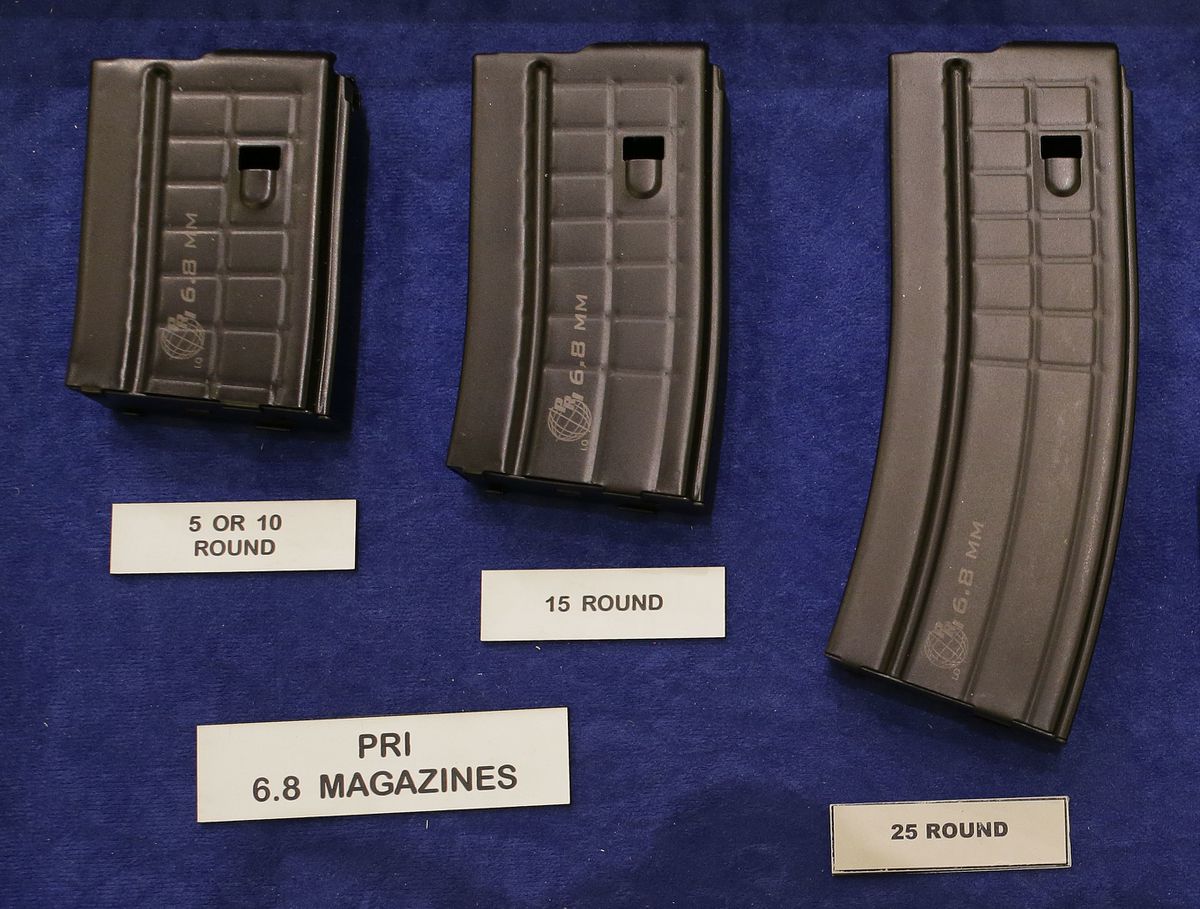 FILE - In this Jan. 16, 2013, file photo, high capacity magazines are seen on display at the 35th annual SHOT Show, Wednesday, Jan. 16, 2013, in Las Vegas. The largest gun industry trade show will be taking place in Las Vegas Jan. 23-26 just a few miles from where a gunman carried out the deadliest mass shooting in modern U.S. history. (AP Photo/Julie Jacobson, file)

FILE - In this Jan. 16, 2013, file photo, high capacity magazines are seen on display at the 35th annual SHOT Show, Wednesday, Jan. 16, 2013, in Las Vegas. The largest gun industry trade show will be taking place in Las Vegas Jan. 23-26 just a few miles from where a gunman carried out the deadliest mass shooting in modern U.S. history. (AP Photo/Julie Jacobson, file)

It took a shooter all of 32 seconds to spray 41 rounds outside a popular bar in Dayton, Ohio, this month, an attack that killed nine people and injured 27. A lightning-fast response from nearby officers prevented a far higher toll: When police shot him dead, the killer still had dozens of bullets to go in his double-drum, 100-round magazine.

The use of such high-capacity magazines was banned in Ohio up until 2015, when a little-noticed change in state law legalized the devices, part of an overall rollback in gun-control measures that has been mirrored in states nationwide.

With the pace of mass shootings accelerating - and their tolls dramatically increasing - criminologists and reform advocates are more intently focused on limiting access to such accessories as one of the most potent ways to curb the epidemic.

Restrictions on the capacity of bullet magazines will not stop mass shootings, but they could make the attacks less deadly, giving potential targets precious seconds to escape or fight back while the shooter reloads, experts say.

"The high-capacity magazine is what takes it to a whole other level of carnage," said David Chipman, who served 25 years as a special agent for the Bureau of Alcohol, Tobacco, Firearms and Explosives. "It's the primary driver for why we're seeing more mass shootings more regularly."

Chipman, who now serves as a senior policy adviser for Giffords, a group that advocates for gun control, said banning the devices "does seem like a logical policy choice if you're trying to stop a killer from turning into a killing machine."

The odds that Congress or state legislatures will act still appear relatively remote. Powerful gun rights lobbying groups, including the National Rifle Association, vigorously oppose high-capacity magazine bans or limits, arguing that criminals will find a way to obtain the devices regardless of the law, just as they do with weapons. Would-be killers, they say, can always arm themselves with multiple weapons or magazines, effectively skirting any ban.

A man in Philadelphia held police at bay for seven hours Wednesday with an arsenal of weapons and ammunition that, as a felon, he should not have been able to have at all; he shot and injured six police officers before surrendering, and authorities have said it was a “miracle” that no one died in the shootout.

Still, a growing body of evidence suggests that past federal and current state-level restrictions on magazine capacity have been effective. And with high-capacity magazines becoming a staple of mass shootings, experts have an ever-longer litany of case studies to bolster their argument.

Magazines like the one used in Dayton have little utility in hunting, law enforcement or self-defense. But high-capacity devices, which are readily available online and in stores, have been used in more than half of all mass shootings in recent years, including especially deadly attacks in Las Vegas, Sutherland Springs, Texas, and Parkland, Florida. Taken together, those three attacks from October 2017 to February 2018 claimed 101 lives and injured 459 people at an outdoor concert, in a church and inside a public high school.

They were also used in the 2011 Tucson shooting of then-Rep. Gabrielle Giffords, D-Ariz., for whom Chipman's group is named. That attack was interrupted when the shooter, who was using a 33-round clip, stopped to reload and fumbled the fresh ammunition. A bystander seized the chance, clubbing him in the back of the head with a folding chair while another tackled him to the ground.

With smaller-capacity magazines, said Robert Spitzer, a State University of New York at Cortland professor who has written five books on gun policy, "you could still do bad things. But not nearly to the same scale."

Studies have bolstered the view that a ban could have an impact.

Magazines with a capacity of more than 10 bullets were prohibited from 1994 to 2004 under federal law that included a prohibition on assault weapons. But since the law lapsed, gun crimes involving high-capacity semiautomatic weapons have increased markedly, according to research conducted by George Mason University criminologist Christopher Koper.

A Washington Post analysis in 2011 came to a similar conclusion, finding that the percentage of firearms equipped with high-capacity magazines seized by police agencies in Virginia dropped during the decade covered by the federal ban, only to rise sharply once the restrictions were lifted.

In more recent research, to be published in the coming months, Koper and his colleagues have found promising signs about the potential for large-capacity magazine prohibitions and their ability to yield reductions in mass-shooting deaths and injuries.

Boston University professor Michael Siegel has found that states limiting the size of magazines are less likely to experience a mass shooting. Nine states and the District of Columbia have such bans on the books, with most of them limiting magazines to 10 bullets.

Until 2015, Ohio had its own restrictions, capping magazines at 30 bullets. But the Republican-dominated state legislature erased those rules as part of a broader package of changes aimed at loosening gun laws.

"They just slipped it through," said Cecil Thomas, a Democrat in the Ohio state Senate. Following the Dayton attack, Thomas and other Democrats are pushing for new limits.

Thomas, a 27-year veteran of the Cincinnati Police Department, said he had to worry as an officer that, with a 15-round clip and one in the chamber of his pistol, criminals would outgun him. "My little nine-millimeter would be useless against an AR-15," he said, referring to his standard-issue handgun and a high-powered assault-style rifle that has proved popular among mass killers.

The Dayton shooter's killing rampage - carried out with a large magazine and other equipment obtained from a friend - has only deepened Thomas' conviction that the laws need to be toughened. He said he hopes Republicans will be amenable to a change that would not infringe on the legality of guns themselves.

"I hear all the time from Republicans about the constitutional right to bear arms," Thomas said. "I say 'You can bear the arms. But I don't know if you have the right to bear all the ammunition in the world.' "

There is precedent for accessory bans, even with pro-gun rights Republicans in charge: The Trump administration last year banned bump stocks, the device that allowed the Las Vegas shooter to fire a semiautomatic rifle almost as fast as a machine gun.

In Ohio, however, there is little indication that a renewed magazine limit is viable. Republican Gov. Mike DeWine - who was greeted with cries of "Do something!" in his first appearance after the Aug. 4 Dayton attack - has proposed a range of measures that includes background checks and increased funding for mental health care.

A high-capacity magazine ban is not among them. In a legislature dominated by Republicans - as well as some Democrats - who prize their ratings with the NRA, few dare defy the group, which calls magazines with more than 10 bullets "standard equipment for many handguns and rifles" and disputes findings that suggest limits can be effective.

"There's not a shred of evidence that high-capacity magazine bans work," said NRA spokeswoman Catherine Mortensen. "Politicians ought to focus on solutions that keep guns out of the hands of dangerous criminals."

The situation is similar at the federal level, where President Donald Trump has expressed a willingness to work with Democrats on background checks. But he has said there is not sufficient "political appetite" for any bans - despite the fact that polls show a large majority of the public in favor. Republicans in Congress have echoed that view, with many recoiling even at the idea of background checks.

Democrats on the presidential campaign trail have said they would prioritize the issue if elected, and they have expressed incredulity that it has not been addressed.

"Who in God's name needs a weapon that has 100 rounds?" former vice president and Democratic poll-leader Joe Biden asked a crowd in Iowa. "For God's sake."

Whether anyone needs them, many people evidently want them. The NRA estimates that more than 250 million magazines with a capacity of 11 rounds or greater are in circulation. Of those, 100 million have a capacity of at least 30 rounds.

Gun experts say their popularity has undoubtedly grown as technology has advanced, making the devices lighter weight and less prone to jams.

A 100-round drum is still too heavy to make it useful for law enforcement or for self-defense, and it is not needed for hunting, said Rick Vasquez, a retired firearms officer and trainer for the federal government.

At the range where he and other professionals shoot, he said, he has never seen a 100-round magazine in use.

But to a certain demographic, the appeal is all about the image.

"You put it on your gun and take a YouTube video of yourself," said Vasquez, who now runs Texas-based Active Crisis Consulting. "It looks really cool to the younger generation."

At the online gun retailer Cheaper Than Dirt, where a drum similar to the one used in Dayton is on sale for $181.33, fun is what is emphasized.

"This 100 round drum magazine lets you shoot while your friends reload," the seller boasts, noting that whether "stress relief or Zombie horde destruction fire this magazine lets the good times roll."

Cheaper Than Dirt did not respond to a request for comment.

Gun-control advocates say that misses the point. And they say they suspect the real point for the gun industry in defending high-capacity magazines is that they are lucrative.

“They make a lot of money off these devices,” said Laura Cutilletta, who, like Chipman, pushes for gun control at Gifford. “They’re reluctant to let any law get in the way of their profit.”