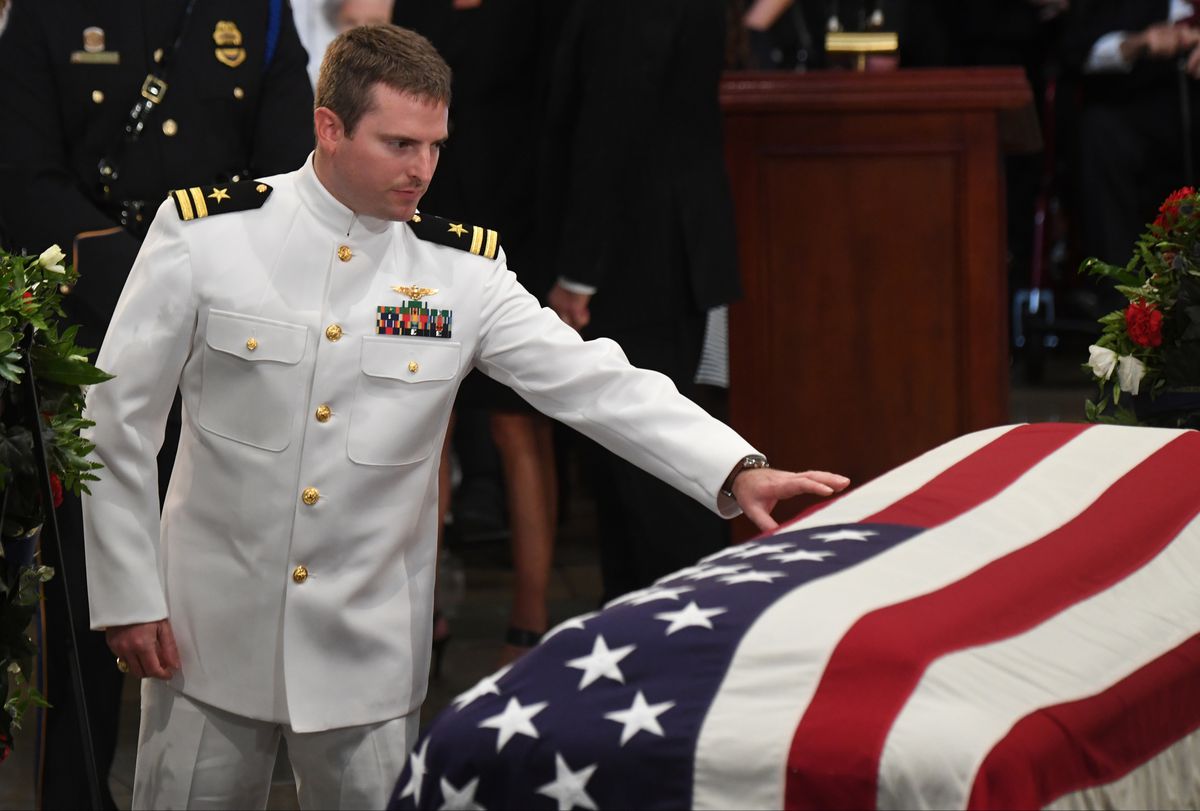 A year after the death of his father, John S. McCain IV is wrestling with his past and his future.

Better known as "Jack," the Navy helicopter pilot and son of the late senator deployed to Afghanistan in May 2018 while his father was battling brain cancer, rushed home for five days of services when his father died, and returned to Afghanistan for eight more months.

In images from the services, he appears crisp and stoic in his white dress uniform amid the pageantry and surrounded by family. But that doesn't tell the whole story.

"I can tell in the pictures - especially in the pictures at first in Arizona - that I was shellshocked," he said. "Obviously, I was tired, but it wasn't just tired. It was getting snatched out of a war zone and getting thrown back into this media and family bubble. It was an intense experience.

"I still don't think I've processed it all."

In a two-hour interview, Jack McCain discussed his year in Afghanistan and what it was like to be a McCain in the Navy - to follow in the footsteps of a father who survived five years as a prisoner of war in Vietnam and a grandfather and a great-grandfather who were admirals. He also described his relationship with his father and his uncertainty about what to do next in life.

Nearly the only subject he declined to talk about was President Donald Trump, who has disparaged his father repeatedly and was not invited to the funeral.

McCain, 33, left active-duty service last month to join the Navy Reserve, a decision that "gives me some time to figure life out" after four deployments. After spending a year in Afghanistan and most of the previous year away in training, he said it was time for a change for his family.

He and his wife, Renee Swift McCain, recently moved into a bright townhouse in a quiet, wooded area just north of Washington. Their son, John S. McCain V - "Mac" - is nearly 3. Renee, a major in the Air Force Reserve, was away on assignment in Estonia during the interview, and his mother, Cindy, was quietly reading in a chair near the dining-room table. Baby toys filled one corner of the room.

"For me, for my family, it was the most difficult decision that I've made," he said of leaving active military service. "I've been doing this since I was 18 years old, and there is always going to be a little piece of me that asks: Was this the right decision?"

Renee later added: "I think just being gone for so long, it's difficult getting back. A lot did happen while he was gone. I got a doctorate, and our son is now walking and talking and has entered preschool, and we moved.

"It's almost like a completely different life that he's stepping back into."

The weight of serving and leaving daily Navy life is heavy in a family with a legacy like few others.

Jack McCain's father served as an attack pilot in Vietnam before going on to run for president twice and serve as chairman of the powerful Senate Armed Services Committee.

Jack's grandfather, John S. McCain Jr., earned a Silver Star for valor as a World War II submariner and commanded forces as a senior officer during the Vietnam War.

Jack is the second of the senator's four children with Cindy McCain. The others are Meghan, a host on ABC's "The View"; James, who served in the Marine Corps and Army National Guard; and Bridget, who is studying teaching at Arizona State University. Their father also had three children from an earlier marriage.

"Something that my father always said - and he really didn't care how - is that he wanted us to serve at some point," Jack McCain said.

He set his sights on graduating from the Naval Academy like his father. But when he arrived in Annapolis, Maryland, he "chafed at the system," as his father had. He observed that some classmates wanted to be friends "because they thought they were going to get something out of it" and that some upperclassmen targeted him with a "little bit of extra hazing."

Navy Lt. Joseph Proffitt, an academy roommate and longtime friend, said the attention McCain received was "almost to the point of being unfair."

"I could see that if I walked a mile in Jack's shoes, there were people with different motives," Proffitt said.

McCain graduated in 2009 and said he is "beyond grateful" to have attended. It's the only college he applied to.

After flight training, he took an assignment in San Diego for a few months and moved to Guam in 2011.

It was there that he met Renee Swift at a Halloween party. McCain was dressed as Dig'em, the cartoon frog mascot for Honey Smacks cereal. She was dressed as Alice from "Alice in Wonderland."

"There was a cereal theme that year in the squadron," he said with a shrug.

To hear her tell it, there was a "harem of girls" around him that night. She didn't want to talk to him. But they eventually spoke, and things "spiraled out of control," he said with a smile.

McCain deployed three times into the Pacific by the end of 2013 and married Renee in between the latter two, in June 2013. They moved to Maryland afterward - he taught leadership at the Naval Academy and she accepted reserve military assignments around Washington.

But even as a naval officer, he had a nagging desire to be part of one of the nation's ground wars.

"He and I are both products of 9/11," said Proffitt, another pilot who took a ground assignment in Iraq in 2016 to support a Navy SEAL unit. "There was just this sense that we had to contribute."

McCain's way in was joining the Afghanistan-Pakistan Hands program, in which service members received language and cultural training to better understand the Afghans.

He initially expected to have an assignment advising Afghan forces on the ground, but he heard that the Air Force badly needed helicopter pilots to train Afghans to fly Black Hawks. Although McCain was in the Navy, he was eligible.

McCain was in training when he learned that his father had brain cancer. The news prompted a conversation between the two in which the younger McCain raised the prospect of flying in Afghanistan, uncertain that he should go.

"For him, it wasn't a question," Jack McCain said. "He said, 'If they're not going to send you, they're going to send somebody else.' "

But he braced for reality. Before deploying in May 2018, he prepared a dress uniform and stowed it away.

"We knew just based on the timeline that his dad would probably die while he was gone," Renee said. "We had a bag hanging in the closet that said 'Funeral,' so that when it was time to go I could just grab the bag and go to Phoenix."

Jack McCain - call sign "Whopper" - deployed to Kandahar Airfield as the only sailor among about 200 Americans.

McCain's squadron commander in Afghanistan, Air Force Lt. Col. Marcus Jackson, said that he initially had concerns about taking on the naval officer with the famous name. If the Taliban figured out who he was, the possibility of an insider attack in the unit was significant.

But McCain, with many months of training, was conversational in Dari and was more experienced than most of the pilots in the squadron. They devised a plan to make it work.

" 'Yes, he is the son of a senator. No, we don't talk about that in front of the Afghans,' " Jackson said of his instructions. "If it ever came up in a conversation, he would say that there are lots of guys named McCain in the military and he's just one of them."

In the first few months, McCain sketched out a syllabus to teach the Afghan pilots and learned their stories. Mirthfully, he also played up his Navy roots, growing a bristly mustache and wearing a patch emblazoned with "Free Trade and Sailors Rights," a slogan used to explain the War of 1812.

On a different occasion, airmen found a fresh bullet hole in another Black Hawk that had been flying with McCain's in a formation, Wright added.

McCain said he marveled at the Afghans, who showed themselves to be "brave beyond measure." By September 2018, they were flying on their own.

McCain, sitting on the rooftop deck of his townhouse, recalled proudly how one Afghan kept his helicopter on the ground with the rotors spinning under incoming fire so a wounded Afghan soldier could be evacuated, and how Afghan and American pilots gathered to remember two fallen Afghans.

The deployment came to a halt last August, three months in.

A Pentagon official called McCain about 3 a.m. to let him know that he needed to start making his way home, by catching a C-17 jet to Qatar. While waiting for a second flight at an airport in Doha, he received another call. His father was gone.

"It was surreal to kind of watch people crowding around the television in the airport to look," McCain said. "There's not much you can say at that point. I got on the aircraft and flew home."

Days later, McCain was sitting next to his mother at Washington National Cathedral during a memorial service. She rested her head on his shoulder tearfully during a rendition of "Danny Boy," a song his father had requested.

McCain delivered a eulogy during a private burial service the following day.

“Goodbye, Old Man,” he said. “Like you, I believe we’ll see each other again. Until then, I’ll keep your faith, and make my life count for something more than myself, so that you’ll be proud of me on that day.”