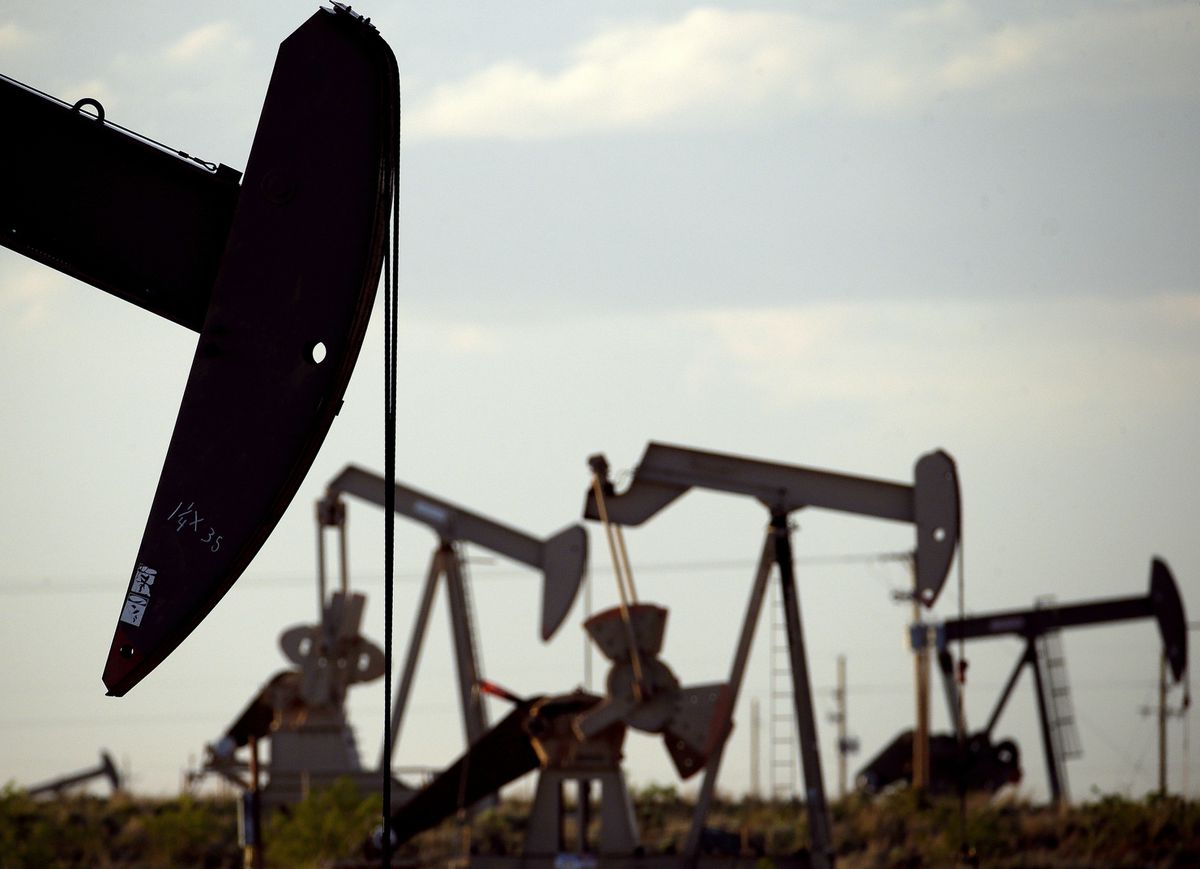 FILE - In this April 24, 2015, file photo, pumpjacks work in a field near Lovington, N.M. Oil industry and environmental groups say they expect the Environmental Protection Agency to release a proposed rule over the next few days that will roll back requirements on detecting and plugging methane leaks at oil and gas facilities (AP Photo/Charlie Riedel, File)

FILE - In this April 24, 2015, file photo, pumpjacks work in a field near Lovington, N.M. Oil industry and environmental groups say they expect the Environmental Protection Agency to release a proposed rule over the next few days that will roll back requirements on detecting and plugging methane leaks at oil and gas facilities (AP Photo/Charlie Riedel, File)

WASHINGTON - The Environmental Protection Agency announced Thursday that it plans to loosen federal rules on methane by allowing oil and gas operators to largely police themselves when it comes to preventing the powerful greenhouse gas from leaking out of new drilling wells, pipelines and other infrastructure.

It also challenges the notion, championed under the Obama administration, that the federal government has the authority to regulate methane without first making a detailed determination that it qualifies as a pollutant under the Clean Air Act.

If successful, that change could hamper future administrations from enacting tougher restrictions on methane. Already, the Trump administration has taken several steps to limit the government's ability to regulate other greenhouse gases in the future, including in a recently finalized rule on carbon dioxide emissions from power plants.

EPA Administrator Andrew Wheeler said in a statement Thursday that the latest proposal removes "unnecessary and duplicative" regulatory burdens. "The Trump administration recognizes that methane is valuable, and the industry has an incentive to minimize leaks and maximize its use."

The move is the latest in a series of Trump actions aimed at undoing previous efforts to combat climate change in the interest of unburdening companies from regulation and reducing costs. Thursday's proposal, like some others before it, faced mixed reaction from the very oil and gas industries meant to benefit from it.

BP President Susan Dio said in a statement that the EPA should regulate methane emissions. "It's not only the right thing to do for the environment, there is also a clear business case for doing this," she said. "The more gas we keep in our pipes and equipment, the more we can provide to the market - and the faster we can all move toward a lower-carbon future."

Smaller operators, however, had lobbied the administration to lift the requirements. The Independent Petroleum Association of America endorsed the change Thursday, calling it much more "cost effective."

Methane is a significant contributor to the world's greenhouse gas emissions. It is 80 times as potent as carbon dioxide, though it doesn't last as long in the atmosphere, nor is it emitted on the same scale.

Scientists have projected that the world needs to cut its overall greenhouse gas emissions nearly in half by mid-century to avert catastrophic effects from global warming. According to the EPA, methane accounted for more than 10 percent of all U.S. greenhouse gas emissions from human activities as recently as 2017. Nearly a third of those emissions were generated by the natural gas and petroleum industry.

Several Democratic presidential candidates seized on the news to argue that Trump should be ousted, underscoring the sharp divide between the two parties on the issue.

"With the Amazon burning, farms under water, and hurricanes looming, Trump has decided to lift regulations on methane- one of the most dangerous greenhouse gases. Even oil and gas companies think this is too far. We need a President who will act on climate, not make it worse," tweeted former Rep. Beto O'Rourke.

Anne Idsal, assistant administrator of the EPA's Office of Air and Radiation, said the administration is confident that methane emissions will continue to decline over time, even without the current regulations.

"Methane is a valuable resource," Idsal told reporters in a call Thursday. "There's every incentive for industry to minimize any type of fugitive methane emissions, capture it, use it and sell it down the road."

David McCabe, a senior scientist at the Clean Air Task Force, noted that the biggest cuts in methane emissions from the gas and oil sector have happened during exploration. Emissions dropped sharply in 2012 and 2016, respectively, after new federal requirements for pollution controls took effect.

"The best information we have is that the emissions dropped because of regulations," McCabe said.

The EPA estimates that the proposed changes, which will be subject to public comment for 60 days after they are published, would save the oil and natural gas industry $17 million to $19 million a year. That is a small fraction of the industry's annual revenues, which exceed $100 billion annually.

Several of the world's biggest fossil fuel companies, including Exxon, Shell and BP, have opposed the rollback and urged the Trump administration to keep the current standards in place. Collectively, these firms account for 11 percent of America's natural gas output.

In a statement Thursday, Shell U.S. President Gretchen Watkins reiterated the company's support for national limits on methane, noting that Shell has pledged to reduce its methane leaks from its global operations to less than 0.2 percent by 2025.

Large oil companies are not the only industry to push back against some of the White House's attempts to scale back environmental regulations.

Last month, four major automakers struck a deal with California to produce more fuel-efficient vehicles in coming years, undercutting one of the Trump administration's most aggressive climate policy rollbacks. And some electric utilities opposed weakening limits on toxic mercury pollution that were put in place under the Obama administration.

Erik Milito, a vice president at the American Petroleum Institute, said in an interview that oil and gas firms have adopted different policy positions in part because some operate globally instead of just in the United States. But he said EPA was right to question the legal justification for the Obama-era standard.

"What they're tackling is whether methane can lawfully be a regulatory pollutant," he said. "We have a strong consensus that federal agencies need to follow the letter of the law. They did not do that, and they are going back and correcting that."

Jody Freeman, a climate adviser to Obama who now teaches at Harvard University's law school, said the Trump administration's rollback will slow down any future administration that wants to aggressively rein in methane emissions.

Still, the EPA acknowledged that its proposed rollback could have public health implications. The fact that more volatile organic compounds could be released, the agency wrote in its proposal, "will degrade air quality and are likely to adversely affect health and welfare" due to more air pollution. But, the agency added, "we are unable to quantify these effects at this time."

In September, the Interior Department eased requirements that oil and gas firms operating on federal and tribal land capture the release of methane.

Kassie Siegel, director of the Climate Law Institute at the Center for Biological Diversity, an advocacy group, called the proposal reckless, saying it shows "complete contempt for our climate." She said that even the Obama administration's efforts to limit methane emissions were modest, given the significant amount that escapes into the atmosphere each year.

"The Obama rule was like a Band-Aid on a gaping wound," Siegel said. "The Trump administration is so fanatical that they couldn't even live with the Band-Aid. They had to rip off the Band-Aid."

The Obama administration's push to impose the first limits on methane emissions from the oil and gas industry in 2016 came shortly after the EPA found that emissions were on an upswing at a time when booming U.S. shale oil and gas drilling had dramatically driven down the prices of domestic natural gas and global oil alike.

Ben Ratner, a senior director at the advocacy group Environmental Defense Fund, said in an interview that rolling back the regulations could reward bad actors in the industry. Given that many major players had embraced limits on methane, Ratner said, Thursday's proposal shows that the Trump administration opposes regulating greenhouse gases on principle.

"It's more of an ideological reaction to regulation of any climate pollutant by the federal government," he said.

The Washington Post’s Steven Mufson contributed to this report.