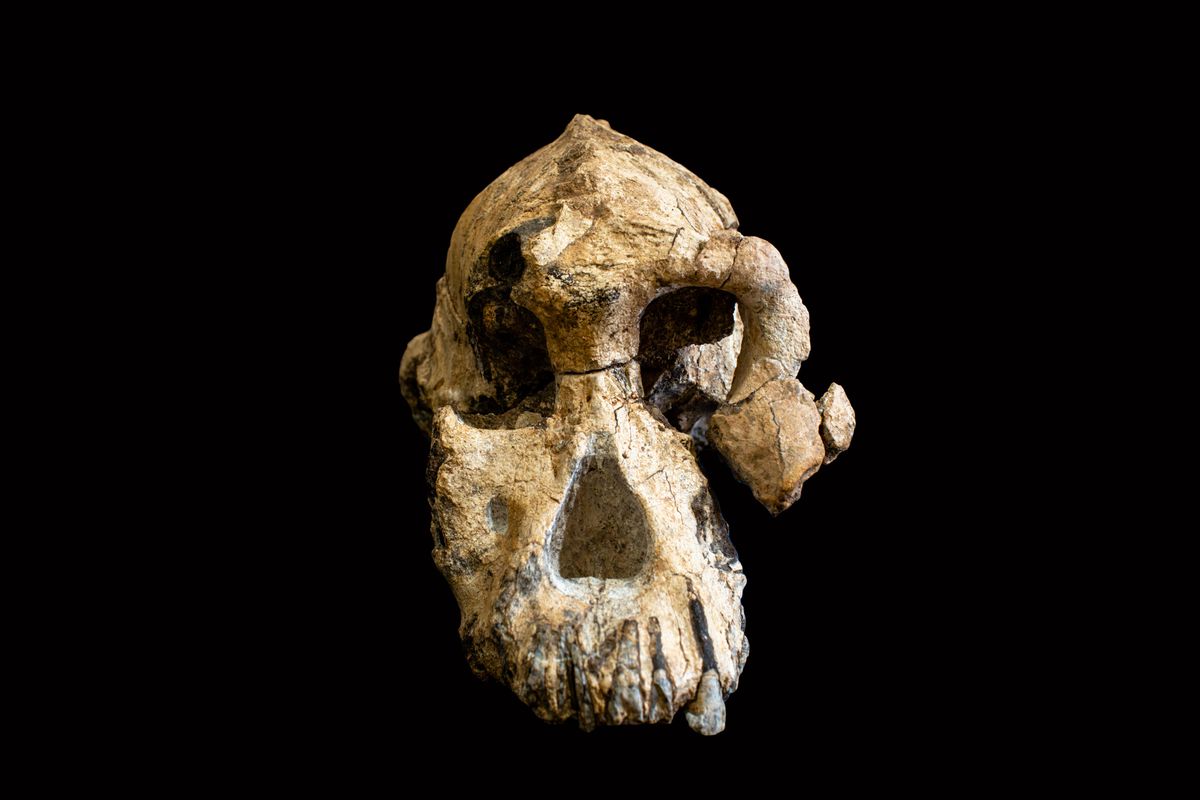 About 3.8 million years ago, a distant human relative took his final steps. Swept into a river delta, his head was buried in sand that, over time, hardened into a stone helmet. The skull fossilized within the sandstone, to the delight of the scientists who discovered the cranium in 2016.

Excavations at Woranso-Mille in Ethiopia, the site of an ancient river and lake system where anthropologists found the fossil, have produced a trove of bones from ancient primates. Yet this skull is “one of the most significant specimens we’ve found so far,” Yohannes Haile-Selassie, an anthropologist at the Cleveland Museum of Natural History and a member of the international team that studied the remains, told reporters on Tuesday.

The skull, probably a male’s, is from a species called Australopithecus anamensis, as Haile-Selassie and his colleagues report in a pair of papers published Wednesday in the journal Nature. When compared with other ancient bones, the cranium could change how anthropologists view a critical point in the evolution of humanlike primates.

"I have no doubt that this specimen will become one of the iconic specimens in early human evolution," said David Strait, a paleoanthropologist at Washington University in St. Louis unaffiliated with the new studies.

Australopithecus anamensis, abbreviated as Au. anamensis, lived between about 4.2 million and 3.8 million years ago. The primates sported a mixture of traits both primitive and humanlike. The species almost certainly walked on two legs, yet they had long arms and strong hands, suggesting they were capable climbers.

You may be more familiar with Au. anamensis' younger relative, Australopithecus afarensis. The most celebrated Australopithecus, Lucy, discovered in 1974, was a member of this species. Au. afarensis' remains appear in the fossil record between around 3.9 million and 3 million years ago. Lucy and her kin left behind bones from nearly every part of their skeleton, and even, in Tanzania, fossilized footprints. Our own human species probably descended from some kind of Australopithecus.

The older Australopithecus left more fragmentary impressions, reduced to an arm, a handful of teeth, partial jaws and other bone scraps. Its skull had long eluded researchers. The new fossil is "the most complete, earliest Australopithecus skull ever found. That's really exciting," said Carol V. Ward, a University of Missouri professor who studies the evolution of early hominins and was not a part of this research. (Hominins are humans and our extinct relatives, who split from the rest of the great ape lineage about 7 million years ago.) "This is the fossil I've been waiting for."

Ward, who has studied Au. anamensis since the 1990s, soon after paleoanthropologist Meave Leakey and her team named the species, said skulls are rich in information. "They house the brain and most of the major sensory systems. They reflect locomotion and body size," Ward said. The jaws can inform scientists about an extinct species' diet. This specimen could help refine the timeline of hominin adaptations, she said. Au. anamensis has a smaller, somewhat differently shaped brain from Au. afarensis.

This skull is the first to "give us a glimpse of what the face of Australopithecus anamensis looks like," Haile-Selassie said. It had a jutting jaw and lower features. Over millions of years, hominin faces flattened while the brain case enlarged. "When did we start looking more like ourselves is the key question, and I would say that starts with the origin of our genus, the genus Homo," he said.

Skull features also allow researchers to tease out the relationships between extinct hominins. "We identify species, not entirely but largely, from the jaws and teeth and cranium, and use that information to sort out how they are related to each other," Strait said.

From this specimen, which represents the oldest Australopith species, "we can better start to address why Australopithecus first evolved," Strait said. It's an early marker on our evolutionary path.

For the past decade, the generally accepted idea, Strait said, was that Au. anamensis transformed over time into Au. afarensis, following in sequence like dancers in a conga line. "This discovery is challenging this idea," he said.

The authors of the new studies suggest that an isolated population of hominins split from Au. anamensis and evolved into Au. afarensis. In this view, Lucy's ilk was an offshoot species that did not immediately replace its predecessor relatives but lived contemporaneously.

The strongest evidence in favor of this explanation is a bone fragment reported earlier, this one from another region in Ethiopia. The fragment, 100,000 years older than the newfound skull, has a forehead that is wider behind the eye sockets. This trait, the authors say, means it belongs to Au. afarensis. Put another way, there may have been a period of about 100,000 years when both Au. anamensis and Au. afarensis lived.

Tim White, a paleoanthropologist at the University of California at Berkeley, disagreed with this hypothesis. "No two crania of any species are exactly identical in all anatomical details," including our own species and "our closest living and fossil relatives," White said.

He interpreted the difference in the measurements of the new skull and the skull fragment as variation within a single species, Au. anamensis. "This discovery is therefore a great example of a very important fossil that does not require a redraw of our family tree," White said, "but rather strengthens the hypothesis that Australopithecus was evolving" between 3 and 4 million years ago in East Africa.

Ward was also skeptical, pointing out that the study authors’ hypothesis hinged on an incomplete bone fragment. “The important thing with all these fossils is that when they raise questions it’s not frustrating,” she said. “It’s raising questions that we now know we should be asking.”