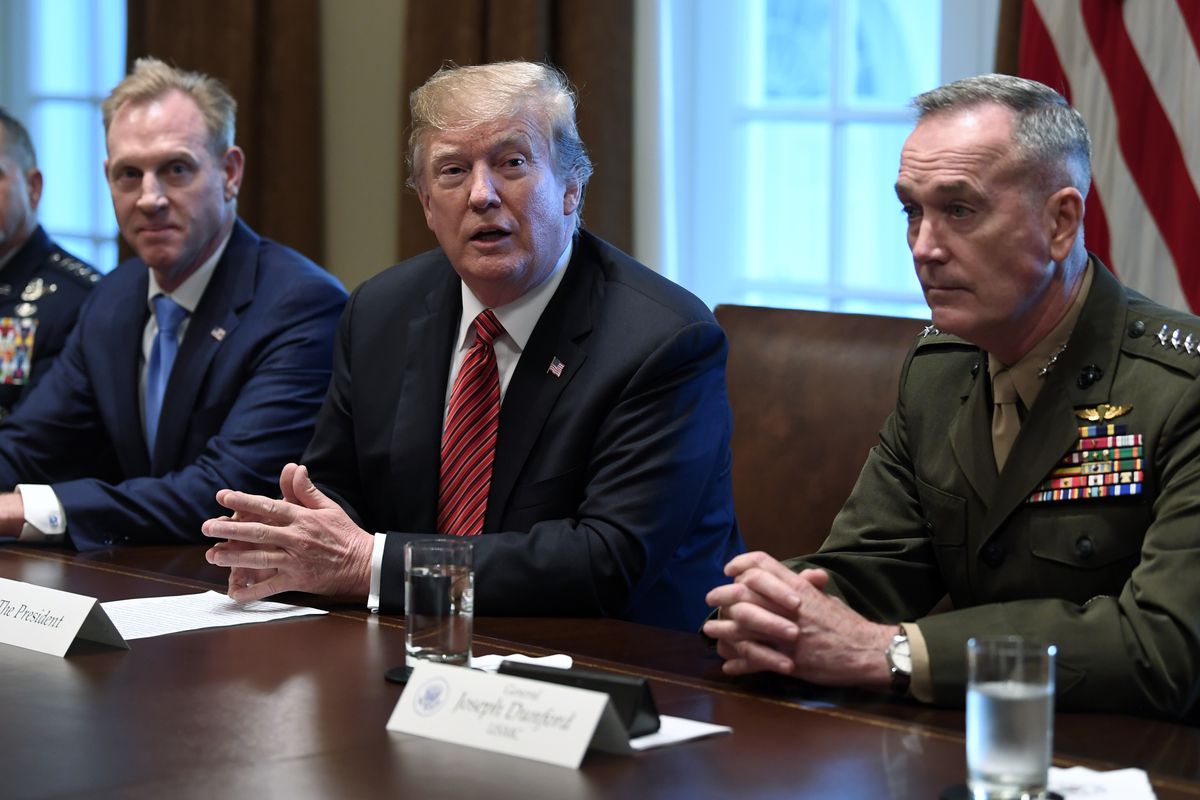 WASHINGTON - The United States is in a “very politically turbulent time” that has required military officials to address displays of partisanship by some U.S. troops, the Pentagon’s top general said Wednesday, emphasizing that the majority of service members have acted professionally.

“With very few exceptions, they have conducted themselves in a manner very consistent with our ethos and with our values,” said Marine Gen. Joseph Dunford, the chairman of the Joint Chiefs of Staff. “They have done exactly what we’ve asked them to do, by and large.”

Dunford, who is expected to retire next month, did not list any of the incidents in question. But some service members at public events have displayed banners, hats and flags featuring the "Make America Great Again" political slogan favored by President Donald Trump. Such displays violate military regulations designed to enforce political neutrality in uniform.

Dunford and Defense Secretary Mark Esper appeared before an overflow crowd of dozens of reporters in the Pentagon press briefing room in the first event of its kind this year, a reflection of turmoil after former defense secretary Jim Mattis's resignation in December over differences of agreement over how Trump treats U.S. allies.

On Wednesday, The Wall Street Journal published an essay adapted from Mattis's upcoming book in which he wrote that he "did as well as he could for as long as he could." Mattis warned that tribalism is dividing the nation and "that our democracy is an experiment - and one that can be reversed."

The Pentagon's current top leaders have expressed warm feelings for Mattis in the past but did not address his criticisms directly Wednesday, saying that they are trying to keep the military out of politics by avoiding partisanship themselves.

"I've worked very hard to remain apolitical and not make political judgments," Dunford said, adding that doing so is "not in my lane."

"I will not now, nor will I, when I take off the uniform, make judgments about the president of the United States or the commander in chief," he added. "I just won't do it."

The Pentagon officials addressed a wide range of other issues in the hour-long news conference, including the future of the war in Afghanistan, relations with Turkey and tensions between the United States and Iran.

On Afghanistan, Dunford declined to provide details about what a future counterterrorism presence in the country could look like if the Trump administration strikes a deal with the Taliban following months of talks.

The agreement is expected to remove several thousand of the estimated 14,000 U.S. troops who are in Afghanistan in exchange for concessions that include a Taliban promise to block activity by al-Qaida and begin further negotiations directly with the Afghan government. U.S. military officials have thrown their support behind the effort but have privately advocated maintaining a force that can strike the Islamic State.

Dunford said the circumstances on the ground "would clearly change in the wake of a negotiation," but he also seemed to inject a note of caution into discussions about a possible U.S. departure.

"I'm not using the 'withdraw' word right now," Dunford said "We're going to make sure that Afghanistan's not a sanctuary, and we're going to have an effort to bring peace and stability in Afghanistan."

The general added that Afghan forces, which for years have struggled with retention and high casualties, continue to require outside military help.

On Iran, Esper expressed cautious optimism that Washington and Tehran may be on a better path than in June, when Iran shot down a U.S. Navy surveillance drone over the Strait of Hormuz and the Pentagon nearly responded with a strike on Iranian targets before Trump called it off.

Esper said he is "not sure I'm ready to call the crisis over yet, but so far so good."

The Pentagon chief also reaffirmed a line he has drawn in regard to Turkey buying the S-400 missile defense system from Russia. The purchase prompted the Pentagon to cancel Turkey's involvement in the F-35 program, preventing the NATO ally from flying any of the U.S. military's most advanced jets in the future.

Esper, asked whether Turkey could obtain F-35s if the nation promised to put the S-400 in warehouses, said "not in my book." But the United States will reevaluate its position if Turkey acknowledges it made a mistake and gets rid of the Russian system, he said.

“I’ve been very clear, in both my public comments and privately with my Turkish counterpart, it’s either the F-35 or the S-400,” Esper said. “It’s not both. It’s not park one in the garage and roll the other one out. It’s one or the other.”