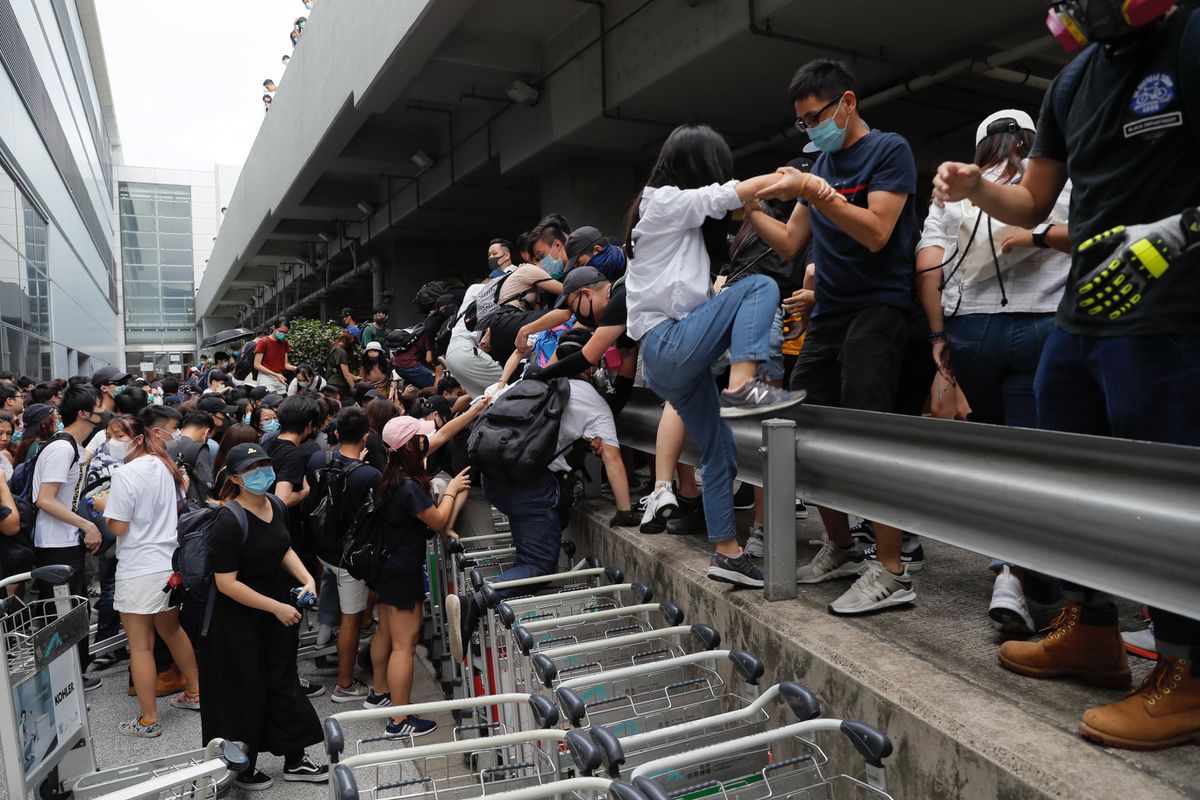 Pro-democracy protestors leave after riot police arrive outside the airport in Hong Kong, Sunday, Sept.1, 2019. The operator of the express train to Hong Kong's airport has suspended service as pro-democracy protesters gathered there following a day of violent clashes with police. Protesters gathered at the airport after online calls to disrupt travel. (AP Photo/Kin Cheung)

Pro-democracy protestors leave after riot police arrive outside the airport in Hong Kong, Sunday, Sept.1, 2019. The operator of the express train to Hong Kong's airport has suspended service as pro-democracy protesters gathered there following a day of violent clashes with police. Protesters gathered at the airport after online calls to disrupt travel. (AP Photo/Kin Cheung)

HONG KONG - Hong Kong protesters on Sunday shifted their focus back to the city’s airport, hindering access to one of the world’s busiest international transit hubs, prompting clashes with police, transportation snarls and confusion.

Their action, a "stress test" to force the government to respond their demands after months of sustained demonstrations, caused airlines to delay and cancel flights, and left passengers with few ways to get to the airport. Many got off at nearby bus terminals and just walked.

Organizers said they hoped to hold similar actions every weekend if the government does not give in to their demands.

"The airport is vital to the economy of Hong Kong," said one of the organizers of Sunday's action, speaking to reporters over the Telegram secure messaging app. "The most impactful way to express our five demands is to go to the airport."

By the afternoon, an express train connecting the city to Hong Kong International Airport was suspended - first because of a decision from authorities, and later because demonstrators had flung objects on the track. Protesters began marching to a subway stop close to the airport, blocking a major access road.

Kiko Escuadro, a 27-year-old tourist heading back to Manila, said the closures forced him to walk an hour and a half from a train station to the airport

He did not mind the inconvenience, however, and made his flight.

The rallies followed intense clashes between protesters and police in Hong Kong on Saturday, a day that ended with fear and violence at subway stops when riot police stormed trains filled with commuters going about their evening, swinging batons and making arrests.

On Sunday, police were waiting at the piers for ferries from Lantau Island, where the airport is located. They stopped and searched those who got off the boats, collected bags of evidence and wrote down identification numbers.

With other public transportation largely shut down, hundreds walked along the highway for hours across Lantau Island back toward Hong Kong Island.

Eventually, they were met at a toll plaza by dozens of volunteer drivers who answered calls put out on Telegram using the hashtag #backhome to assist demonstrators. Drivers filled their cars to shuttle protesters away; other demonstrators boarded double-decker buses.

After 13 straight weekends of protest, the rupture between Hong Kong police and civilians appears to be solidifying, with no end in sight to the crisis. The government refuses to make concessions, and protesters have been undeterred by mass arrests and police use of force.

Hong Kong International Airport, a major Asian hub ranked among the world's most efficient, has been the focus of previous demonstrations. Protests against a proposed law to allow extraditions to mainland China have attracted widespread support across the semiautonomous Chinese territory. Since returning to mainland control in 1997, Hong Kong has fought to protect its democratic freedoms and cultural uniqueness.

A demonstration at the airport last month turned ugly as protesters held two Chinese men - one a reporter for the Global Times, a Communist Party newspaper - and blocked passengers from boarding their flights.

A court injunction has banned further gatherings at the airport, so protesters on Sunday focused their action on a bus stop outside the terminal and on roads around the airport. Terminals were heavily fortified by police, who were letting in only travelers with boarding passes.

Hong Kong police marching through the airport on Sunday afternoon were met with boos and jeers. Relations between the force and most city residents appear to be at an all-time low, as officers are perceived to be doing Beijing's bidding in suppressing the city's freedoms.

Later Sunday, protesters entered the Tung Chung metro station in the neighborhood next to Hong Kong's airport and defaced it. They smashed glass panes, flooded the station and sprayed graffiti reading "communist rail trash" and "glory to Hong Kong" on the walls. Protesters also lit barricades and roadblocks on fire.

The MTR Corporation, which runs the subway system, has come under protester fire over perceptions that it is not keeping demonstrators and commuters safe from police brutality. The transportation operator closed stations closest to planned protests, after Chinese state media accused it of facilitating the unrest.

China has threatened military action and held less-than-subtle crowd control and riot drills across the border. Beijing's threats have changed policies, forced resignations and created a climate of fear in one of Hong Kong's most recognizable brands, the Cathay Pacific airline.

Still, it is the Hong Kong police that have been the main tool for suppressing the protests. Saturday night's attacks on demonstrators, many of which were caught on video, alarmed residents, as the police have been dramatically increasing their use of force.

Videos shot by reporters and eyewitnesses showed masked officers charging into a stalled subway car, swinging wildly at people crumpled on the floor. The officers used pepper spray within the car, leaving commuters screaming in pain and crying.

As protests were winding down in central Hong Kong, officers from an elite tactical unit stormed multiple subway stations in Kowloon, across the harbor from Hong Kong Island, and arrested dozens.

A focal point of the violence was the Prince Edward subway station, which connects passengers to a dense residential neighborhood and tourist sites including a flower market. A 30-year-old woman who was returning home from her office through the station said trains were running slower than usual, so she called her father to pick her up from the station. When she began to leave, she saw police storm in and she rushed to alert others that they should flee.

"More and more police kept coming in," she said. "They rushed the protesters and started to beat them up."

Another commuter angrily yelled at an officer, who turned to confront her.

"I was worried that he was going to grab her," the woman said, and started to cry. "I just held the lady and patted her on the shoulder to show (the police) that she was not alone and they couldn't grab her."

A 25-year-old woman, who was waiting at Prince Edward station after seeing a movie, said police swarmed in and began indiscriminately tackling people. The woman was shoved into a train car but quickly jumped out again.

"Once the police came, the whole thing became a mess," she said. "The cops were beating citizens without differentiating them from protesters. If I didn't leave the train immediately, I would have been beaten by the police as well."

Among those arrested in the subway was a 13-year-old boy attending his first protest, according to a 22-year-old who had been keeping an eye on him. Police confirmed the arrest.

"I started crying because all he wanted to do was to fight for Hong Kong, and experience the protests himself, but I couldn't keep him safe," said the older protester.

A doctor returning from his shift at a public hospital left his subway car after an announcement from the MTR. As he took the escalator up from the platform, he said, police burst in and "began dragging down anyone they could grab on to."

His work had largely kept him away from the demonstrations, he said, and he hadn't fully believed the stories about the police use of force. Now he does.

"The police are not the police that we used to know," he said. "The Hong Kong police are all gangsters until proven otherwise. I don't feel safe talking to a single policeman now."

Police officials said they were responding to protesters who were participating in an illegal assembly and destroying property in the subway stations. A police spokeswoman said officers used their “professional experience” to distinguish between protesters and ordinary commuters. She later acknowledged that it would have been difficult to tell them apart.