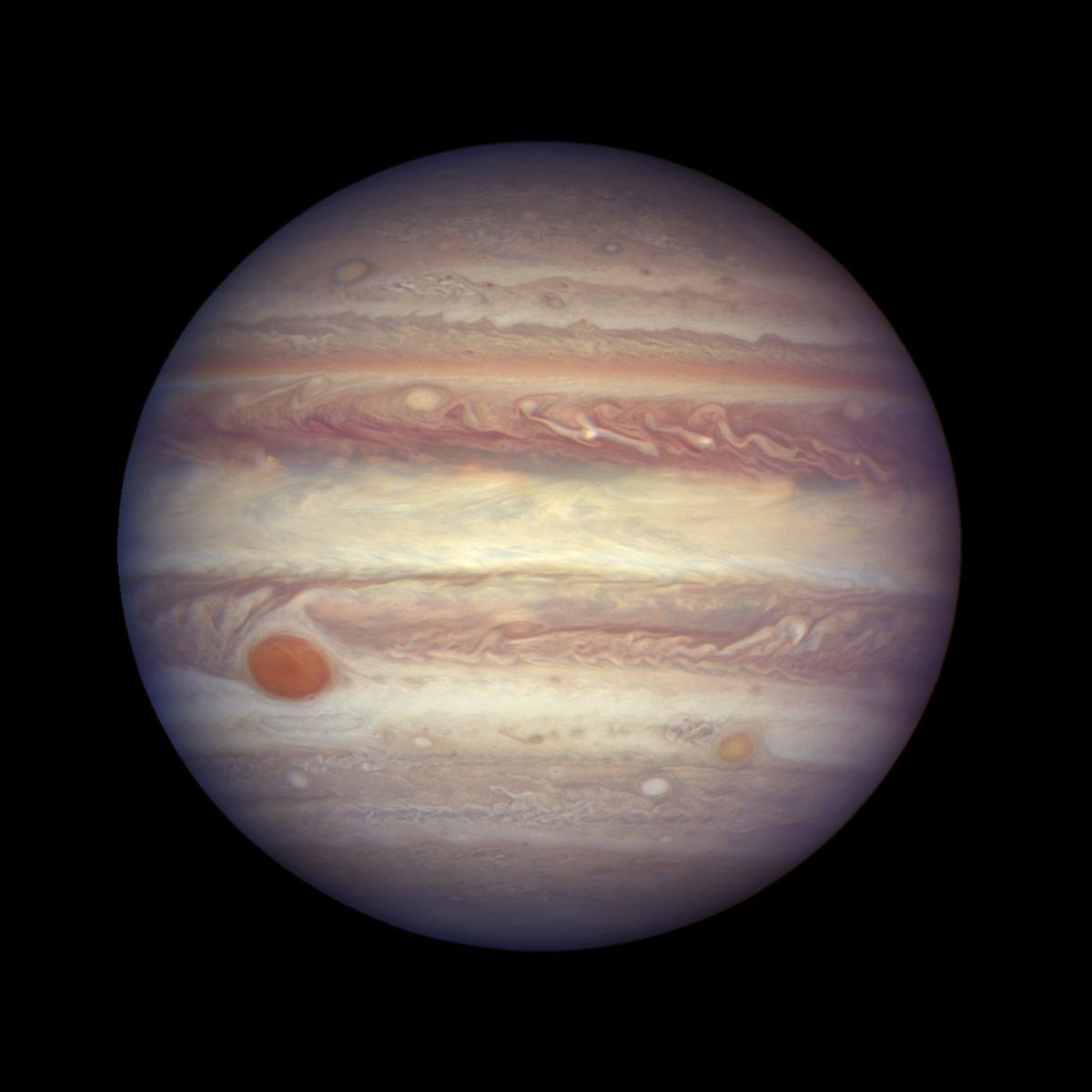 This April 3, 2017 image made available by NASA shows the planet Jupiter. A team of astronomers is reporting the recent discovery of a dozen new moons circling the giant gas planet. That brings the number of moons at Jupiter to 79, the most of any planet. The astronomers were looking for objects on the fringes of the solar system when they spotted the Jupiter moons. They found a dozen small moons. The confirmation of 10 was announced Tuesday, July 17, 2018; two were confirmed earlier. They’re calling one moon an ‘oddball’ because of its unusual orbit. (NASA, ESA, and A. Simon (GSFC) via AP, File)

This April 3, 2017 image made available by NASA shows the planet Jupiter. A team of astronomers is reporting the recent discovery of a dozen new moons circling the giant gas planet. That brings the number of moons at Jupiter to 79, the most of any planet. The astronomers were looking for objects on the fringes of the solar system when they spotted the Jupiter moons. They found a dozen small moons. The confirmation of 10 was announced Tuesday, July 17, 2018; two were confirmed earlier. They’re calling one moon an ‘oddball’ because of its unusual orbit. (NASA, ESA, and A. Simon (GSFC) via AP, File)

NASA astronaut Anne McClain was accused last week of what may be the first crime committed in space.

Former Air Force intelligence officer Summer Worden filed an identify-theft report with the Federal Trade Commission, alleging McClain, her estranged wife, accessed her bank account without permission from the International Space Station, where she is stationed on a six-month mission.

According to The New York Times, McClain admitted to logging into the account from space, but claimed it was routine and blamed the allegations on the couple's bitter separation and ongoing custody battle.

The incident is still being investigated, but it raised questions about how the law applies in space.

The International Space Station is governed by a treaty called the Intergovernmental Agreement on Space Station Cooperation, signed by all five entities involved in the ISS - Russia, Japan, Europe, Canada and the United States. When a crime is committed on the ISS, it states that the country whose national was involved has criminal jurisdiction, unless people from other countries were affected.

Because McClain's actions - whether criminal or not - affected only U.S. citizens, it falls entirely under U.S. law.

But what if the crime involved a civilian staying in a space hotel and, instead of going into a computer, she stole another guest's watch, whose laws would apply then? In the soon-to-be era of space tourism and routine travel, criminal jurisdiction is just one of many complex legal issues arising.

Here's a breakdown of space law, how it affects our day-to-day lives, and several things you wouldn't have known space law experts are thinking about.

When we think of space, we think of rovers going to Mars and Apollo landings. We don't think about the mundane, everyday things: telecommunication, transmission of information, GPS location services and tracking transponders in the air and sea.

"We take it for granted. We think of the milestones," said Andrea Harrington, associate professor at the Air Command and Staff College at Air University, but we use space every day. (Her views do not reflect the position of the Air Force or U.S. government.)

Telecommunication, GPS navigation and timing technology satellites are in space. Without them, financial institutions wouldn't be able to function. People wouldn't be able to make banking transactions or withdraw money from ATMs. We would lose any space-based weather forecasting and satellite-based television and Internet. Travel by air and sea transponders would be down; Instagram wouldn't work on some phones; and there would be no Sirius XM radio. Some hospital systems need satellite integration to function, too.

When there's a hurricane, earthquake or other disaster, Harrington said that multiple countries with remote-sensing satellites - including the U.S., Japan, South Africa, Russia and the European Union - are part of a disaster charter. Whomever had a satellite passing over the disaster-ridden region before, after and during the event has agreed to share data to mitigate damage, saving lives and property.

Yes, space law is a thing. (And it doesn’t involve real estate or aliens.)

Space law is a collection of domestic and international agreements and guidelines that govern issues like space exploration, military and weapons use, and liability for damage. It also involves other fields of law, from criminal, commercial and insurance law to property and environmental law.

There are four space-related treaties that the U.S. is a party to: the Outer Space Treaty, the Liability Convention, the Registration Convention and the Return and Rescue Agreement.

The Outer Space Treaty - or as some call it, "the Magna Carta of Space" - is a 50-year-old agreement that outlines how to peacefully explore space.

"All space-faring states are parties to the Outer Space Treaty," Charles Stotler, associate director of the University of Mississippi's air and space law program told The Washington Post. It includes 109 nations, with more joining regularly.

The U.N.-approved document is the foundation of international space law. Its guiding principle is that space exploration should be a peaceful initiative and all nations should have free access to space. The Outer Space Treaty covers things like how to hold nations responsible for their space actions and rules to avoid polluting our solar system. It also addresses fair use of outer space and prohibits any nation from "appropriation of outer space, including celestial bodies."

How to interpret that clause has become contentious as the commercialization of space expands. Stotler said that countries have differing interpretations - to some, it means no country can own territory in space, but others have applied it to ownership of anything, including extracted resources, absent an international agreement.

The Registration Convention requires registration with the United Nations before sending something to space and the Liability Convention states that a nation is liable for damage if its space object harms someone else's. Under the Return and Rescue Agreement, if a party stumbles upon an astronaut in need, it must rescue him or her.

After more than three decades enmeshed in space law, Jakhu warned of several other issues that have become increasingly dangerous: the militarization of space, exploitation of natural resources and space debris.

"The biggest changes have been the development of technology and business and the militarization of space," Ram Jakhu, former director of the Institute of Air and Space Law, told The Post in a phone interview Thursday. "The problems have increased significantly but the law has not kept pace with that."

On Thursday, President Donald Trump announced the establishment of the U.S. military's Space Command. Jakhu explained that, like the U.S., Russia and China are building space forces, and "once you have a dedicated force, you're preparing for war."

"These are issues with lack of law," he said. "Things are going to be worse in the future because the number of actors and activities will increase - and they should increase. Space offers tremendous benefits. We just need to keep up with the technology."

Article 4 of the Outer Space Treaty addresses military use. It says that the moon and other celestial bodies must be used "exclusively for peaceful purposes."

According to Harrington, the language doesn't inherently prohibit military activity.

"Part of the problem is that most space objects are dual-use," she said. Anything that can closely approach another space object, like the space shuttle sent to service the Hubble, also has the potential to be used as a weapon.

The "peaceful purposes" limitation doesn't apply to deep space activity, she said. There, the bar is exclusively on nuclear weapons and weapons of mass destruction. There's no prohibition on things like setting up military bases, conducting weapons testing, or bringing weapons into space, so long as they aren't weapons of mass destruction and comply with other Outer Space Treaty requirements.

Another major concern voiced by many experts in the field was the increase in space debris.

These pieces of left-behind, man-made objects lead to in-orbit collisions. They can be as large as a motorcycle and as small as a tool lost by an astronaut, and move around at fatal speeds, threatening people, space stations, and satellites that impact global commerce, commercial and military missions.

Debris, which will multiply as the exploration and uses of space increase, has been created accidentally and deliberately. Every collision, breakup or fragmentation creates additional debris.

For example, China launched a missile to strike down one of its aging satellites in 2007; the collision caused thousands of new pieces of debris.

If debris causes damage or loss of life on the earth's surface, the liability is on the launching state, said Matthew Schaefer, co-director of University of Nebraska College of Law's Space, Cyber and Telecommunications program. But if the harm happens in space, he explained, it becomes murkier.

"If it's in outer space, it's a fault-based standard," which is difficult to assess, Schaefer said. (Among other things, the debris' origin would need to be known and it would need to be big enough to track.)

As of March, there were 2,062 satellites orbiting Earth, more than 40% of which belonged to the United States. The nation's overwhelming dependency on its space assets places it at a greater risk of space debris - deliberate or accidental.

A look into the future

There's a commercial burst underway due to new technology, lower-cost access to space, and new business models, Schaefer said, and as traditional space activities are revolutionized, new and complex legal issues crop up.

Although the Outer Space Treaty says no nation may appropriate territory anywhere in space, it's silent to individuals and corporate entities.

Companies are already building models for space hotels, and soon we're going to have commercial entities landing on and mining the moon. Space travel and tourism create a pressing need for legislation to ensure that private companies comply with the minimal OST obligations, Schaefer said, adding that liability issues will become particularly relevant as suborbital flights begin in the next 12 to 18 months.

China is planning to put the first space-based solar-power satellite into orbit and Harrington said the FCC has received applications for thousands of new satellites for utilities like space-based Internet services.

And then others, like Michelle Hanlon, associate director of the University of Mississippi School of Law's air and space law program, are debating what human rights are needed in space.

The population of humans in space is going to continue to grow, Hanlon told The Post.

“There’s no Declaration of Human Rights that says humans have a right to oxygen or right to an open line of communication back to earth,” she said. “Things have to evolve to protect humans in space.”