A storm chaser went silent as Dorian slammed the Bahamas. He emerged with a harrowing story. 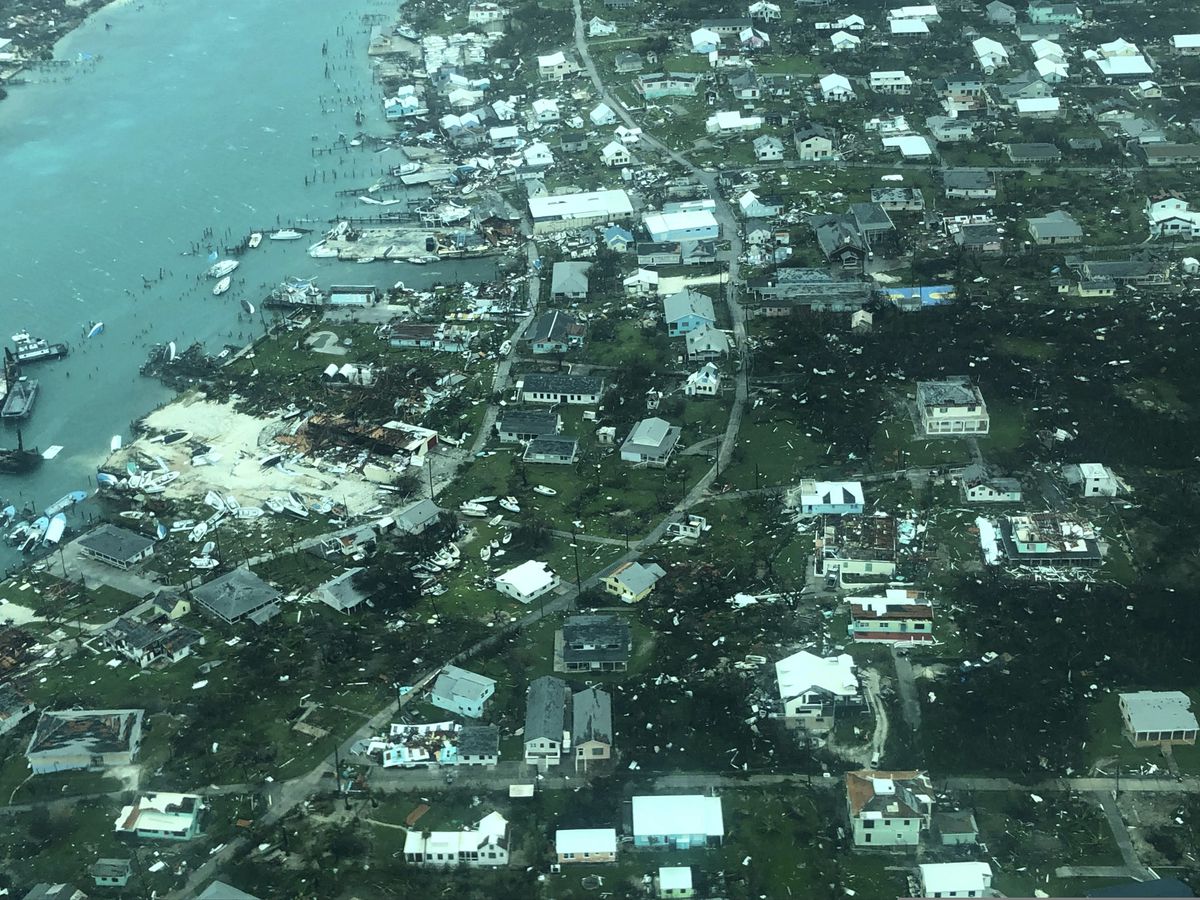 This aerial photo provided by Medic Corps, shows the destruction brought by Hurricane Dorian on Man-o-War cay, Bahamas, Tuesday, Sept.3, 2019. Relief officials reported scenes of utter ruin in parts of the Bahamas and rushed to deal with an unfolding humanitarian crisis in the wake of Hurricane Dorian, the most powerful storm on record ever to hit the islands. (Medic Corps via AP)

This aerial photo provided by Medic Corps, shows the destruction brought by Hurricane Dorian on Man-o-War cay, Bahamas, Tuesday, Sept.3, 2019. Relief officials reported scenes of utter ruin in parts of the Bahamas and rushed to deal with an unfolding humanitarian crisis in the wake of Hurricane Dorian, the most powerful storm on record ever to hit the islands. (Medic Corps via AP)

Josh Morgerman recorded the storm’s menacing progress by the minute.

At 8:17 on Sunday morning, he said the wind gusts were getting scary at the schoolhouse in Marsh Harbor on the Bahamas' Great Abaco Island, where he was hunkered down, waiting for one of the most destructive hurricanes in the islands' history to make landfall.

“I feel like a rocket is about to take off,” he wrote to his 80,000 Twitter followers, amassed during his long career as a tempest chaser known for capturing harrowing eyewitness video.

"This is gonna get ugly."

As the potent storm known as Dorian closed in, Morgerman prepared to be cut off from the internet, from the rest of the world: "This is possibly the last you'll hear from me for a long while," he warned on his Twitter account, @iCyclone.

At 11:15 a.m., Morgerman reported that his building was near the hurricane's eyewall, its most destructive area where winds blow fastest. He said he and six others had barricaded themselves in a concrete room, pushing chairs against the door to keep it closed.

Twenty-five minutes later, he sent what would be his final tweet from the middle of the storm.

"Pounding. CRASHING. Boards prying off windows," he wrote. "We're moving children to a safe space, wrapping them in blankets."

Online, people wished him luck and implored him to stay safe.

On the ground, Abaco was at the time one of the most unlucky, unsafe places in the hemisphere.

For nearly two days - from a few hours after Morgerman's final tweet until Tuesday afternoon - Dorian ceaselessly slammed the Bahamas with a catastrophic combination: winds that whipped at 185 mph, in a storm that crept along, maximizing its devastation.

And the school where Morgerman took refuge was in one of the country's hardest-hit regions.

For a short while this week, no one heard from him, even as his friends and fellow pursuers posted updates of their own. The storm passed, but rumors swirled. He was feared dead.

Then, at 5:52 Tuesday evening, the Weather Channel’s Twitter account published a photo of Morgerman, brows raised and eyes sunken. “We are in contact with Hurricane Chaser Josh Morgerman,” the post read. “He is safe.”

The Washington Post could not reach Morgerman that night.

But some 15 minutes later, he began tweeting again. He had made it out of the storm and into Nassau, the Bahamian capital. But he brought with him a terrifying story.

“Yep, I’m alive,” he began in a series of posts, 54 hours after going dark. “By far the most intense cyclone I’ve witnessed in 28 years of chasing. Thought I was playing it safe by riding it out in a solid-concrete school on a hill in Marsh Harbour. Thought wrong.”

"Winds pounded the building with the force of a thousand sledgehammers," he added.

In an interview with the Weather Channel from Nassau, Morgerman recounted the most ferocious moments.

"Everything turned white," he said. "It was just solid white and a roaring sound. . . . It was like we were in a washing machine during the maximum winds - and that's what I really remember about this hurricane, just this unbelievable blizzard-like whiteout."

After that, the school was mostly destroyed, and there was more storm to come. Without shelter, Dorian could be deadly. But Morgerman and others inside the building had caught one break: They were, at that moment, in the eye of the hurricane - a tranquil but fleeting respite from a ferocious vortex.

They took their chance to flee, driving to a government building that was filled with new refugees.

It's also why he chose that locale. Morgerman said he wanted to get as close to the eye as he could, a front-row seat for the archipelago's most brutal show.

His and other stories that began to emerge from the island nation as the storm moved north serve as the first accounts of a historic event. Dorian flattened buildings, perhaps leveling entire towns. It has claimed seven lives, but government officials expect the toll to rise much higher. It could define the Bahamas for decades.

In aerial footage taken after the storm passed, the cameramen narrate the island's desolation, pointing out landmarks no longer visible beneath torrents of floodwater.