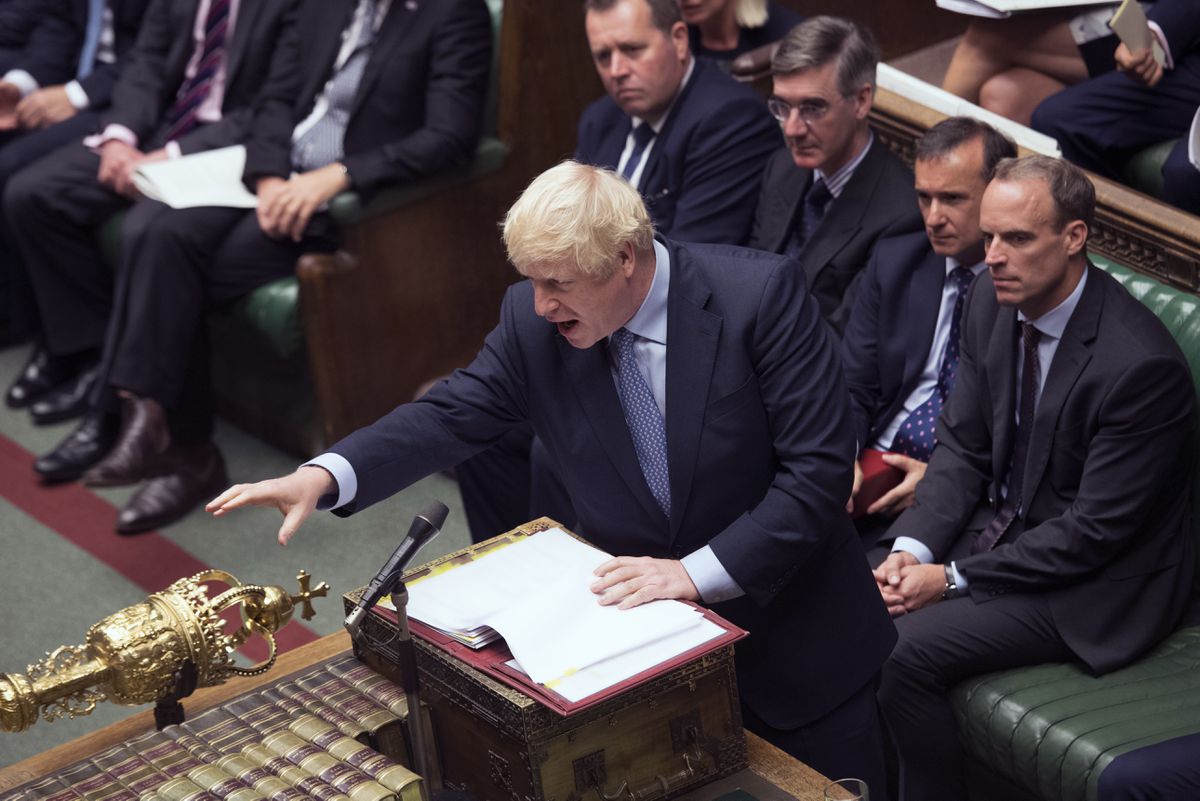 LONDON - A day after suffering a devastating defeat in Parliament, Prime Minister Boris Johnson faced another in the House of Commons on Wednesday as he tried to salvage his Brexit plans and force a general election next month.

Lawmakers defied Johnson by passing legislation seeking to avoid an abrupt no-deal Brexit on Oct. 31. The bill still needs approval by the House of Lords.

"I think it's very sad that MPs have voted like this. I think it's a great dereliction of their democratic duties," Johnson said, just after the vote.

Johnson then proposed an early general election, on Oct. 15, to determine whether he or Labour Party leader Jeremy Corbyn, would become prime minister and represent Britain at key meeting with European Union leaders on Oct. 17.

Johnson needs two-thirds of the 650 members of the House of Commons to support his call for a national vote, but his opponents want concessions from him before they agree.

"We want an election so we look forward to turfing this government out," Corbyn said. But he withheld support Wednesday. He called Johnson's call for an election "a cynical move by a cynical prime minister" who is trying to sneak through a no-deal Brexit.

Corbyn and his lieutenants insist on guaranteeing against an October no-deal exit first - meaning that legislation passes all the way through the House of Lords and is signed into law.

These defeats could be crippling for the prime minister, who is just six weeks into his term and has staked his job on his ability to deliver Brexit.

"It's the shortest honeymoon in British political history," said Jon Tonge, a politics professor at the University of Liverpool, who said Johnson is essentially in government, but not in power. "Boris Johnson is in a terrible mess."

A defiant Johnson led his first "Prime Minister's Questions" session in Parliament on Wednesday and demanded, "Let's get Brexit done."

Johnson portrayed himself as a "sensible, moderate and Conservative" leader who wanted to "deliver the mandate of the people" by an Oct. 31 deadline, even if that means a no-deal exit without agreements in place to regulate trade and other matters. He accused his opponents of "dither, delay and confusion" that would guarantee more years of debate and uncertainty about Brexit. And he dismissed predictions of the economic harm of a no-deal Brexit as "shameless scaremongering."

It was a fiery performance by a prime minister facing a growing rebellion in his Conservative Party and opposition leaders emboldened by their newfound leverage. Johnson risks seeing his bold moves to realize Brexit fall into the same quagmire that sunk his predecessor, Theresa May.

Johnson said that with Parliament voting to postpone Brexit once again, the British people should get to decide whether they want him or his chief opponent, Labour Party leader Jeremy Corbyn, negotiating the terms with European Union leaders. He called for a snap election on Oct. 15.

Johnson claimed neither he nor the British people want another general election, which would be the third in five years. But his position rang hollow to many observers. On Tuesday morning he had a slim working majority, by only one seat, in the House of Commons. By Wednesday, after defections and excommunications, he was 43 seats short of a working majority, making it nearly impossible for him to pass any legislation, even on non-Brexit bills.

So an election may be inevitable - although maybe not on Johnson's terms.

Johnson supporters in the House of Lords have staged a filibuster to block the Brexit delay bill. Some members said they expected debate to last all night and into Thursday morning. But the House of Lords is overwhelmingly pro-EU, and the bill is expected to pass in the end.

Johnson's frustration - or unorthodox style - was on display in the Commons Wednesday. He uttered "shit," a word not usually heard in public from prime ministers. He also taunted Corbyn, calling him a "chlorinated chicken" and mouthing what appeared to be "a great big girl's blouse." That's an insult he has used before, which was immediately blasted on Twitter and elsewhere as sexist - and maybe a little odd.

Corbyn shot back: "If the prime minister does to the country what he has done to his party in the past 24 hours, I think a lot of people have a great deal to fear from his incompetence and his vacillation."

Johnson has banned from his party the 21 rebels who voted against him on Tuesday. He seem to hope they will be replaced in the next election by candidates more loyal to him and his Brexit vision. But those banned lawmakers include some of the most respected figures in the party, including two former chancellors of the exchequer, or finance ministers: Kenneth Clarke and Philip Hammond.

"There has to be an election, but Boris Johnson has damaged his own party in the run up to an election," said Tonge, the professor.

Also banished, remarkably, was Nicholas Soames, 71, former prime minister Winston Churchill's grandson, who has served in Parliament for 37 years. Johnson idolizes Churchill and wrote a biography of him.

Bafflement over that expulsion was summed up by Ruth Davidson, who stood down as the Conservatives' leader in Scotland last week.

"How, in the name of all that is good and holy, is there no longer room in the Conservative Party" for Soames, she tweeted, using the hashtag: #anofficerandagentleman.

In a debate ahead of a vote on the delay legislation, Soames, who is now an independent lawmaker, urged others to back the bill, which he said "merely seeks to avoid disaster of a no-deal Brexit."

He said that he believed that the result of the 2016 EU referendum had to be respected and pointed out that he backed May's deal on three occasions, "which is more than can be said for the prime minister, the leader of the House and several members of the cabinet, whose serial disloyalty has been such an inspiration to so many of us."

The bill passed in the House of Commons Wednesday would require Johnson, by Oct. 19, to win Parliamentary approval for a Brexit deal or a no-deal exit, or to write to the EU seeking a three-month delay on Brexit. With EU agreement, the new Brexit date would be Jan. 31.

In effect, the bill would delay Brexit, and forbid a no-deal Brexit next month without Parliament's approval - which it will not give. It would give London three more months to negotiate Brexit terms, which is has been unable to do in the past.

For years, EU diplomats watched May, negotiate positions with the EU, then fail to rally Parliament behind her. They briefly hoped Johnson might be more successful, but now they said they believe they were wrong.

EU Brexit negotiators say they remain eager to see new proposals from Johnson's team. But they are bracing for the impact of a possible no-deal Brexit. They have set aside $660 in disaster-relief funds to help EU countries hurt by a no-deal Brexit.

"There's a real problem with Johnson, and it's a problem Theresa May didn't have," Starmer, the Labour Brexit negotiator, said on Sky News. "People disagreed with Theresa May, but when she stood at the dispatch box and said something, she meant it and she was trusted.

"Johnson is not trusted," he said. "Even if he says the election will be on the 15th of October, most people in Parliament won't believe him. This is his central problem."

At least one person remains fully confident in Johnson. In the Oval Office Wednesday, President Trump said: "He's a friend of mine, and he's going at it, there's no question about it. Boris knows how to win. Don't worry about him."

Johnson won one victory Wednesday morning in one of several legal cases that have been filed over his decision to suspend Parliament for five weeks. A judge in Scotland's highest civil court on Wednesday ruled that the decision was lawful, but those who brought the case - 75 lawmakers - could appeal. There are similar legal challenges in Northern Ireland and in England.

The Washington Post’s Michael Birnbaum in Brussels and Laura Hughes in Washington contributed to this report.