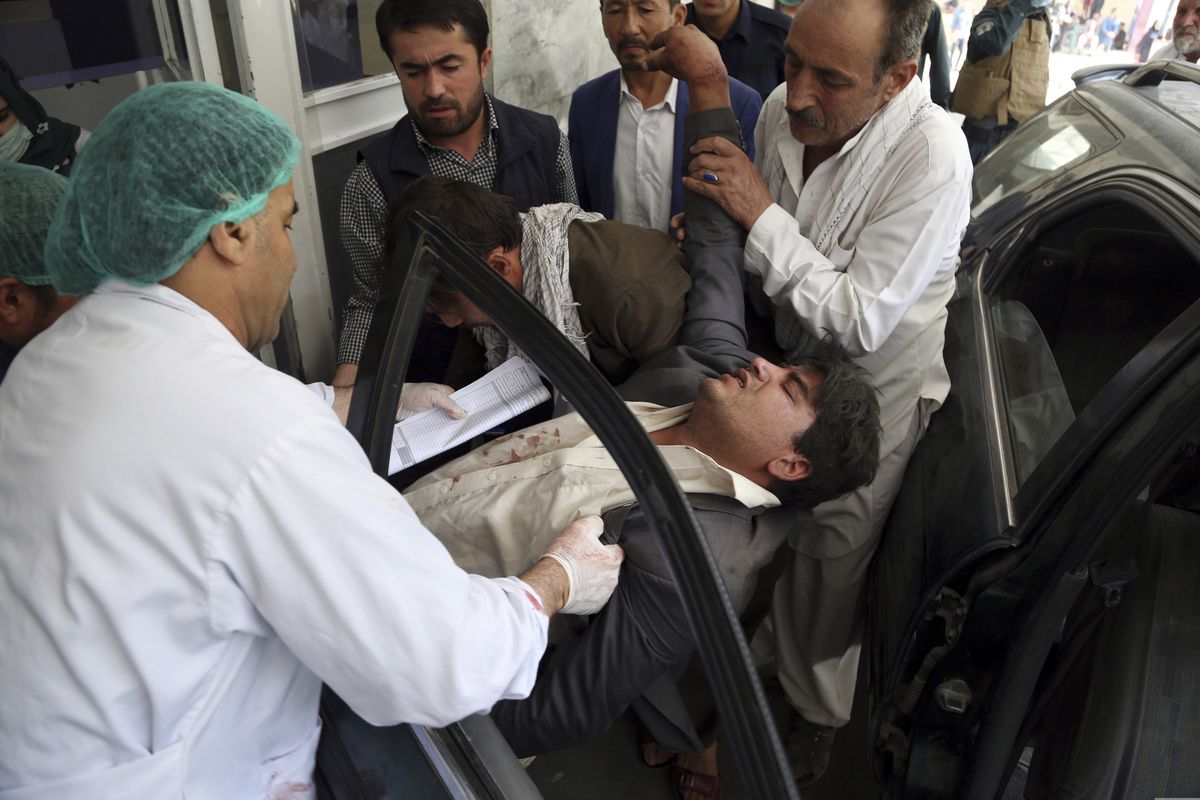 An injured man carried into a hospital after a car bomb explosion in Kabul, Afghanistan, Thursday, Sept. 5, 2019. A car bomb rocked the Afghan capital on Thursday and smoke rose from a part of eastern Kabul near a neighborhood housing the U.S. Embassy, the NATO Resolute Support mission and other diplomatic missions. (AP Photo/Rahmat Gul)

An injured man carried into a hospital after a car bomb explosion in Kabul, Afghanistan, Thursday, Sept. 5, 2019. A car bomb rocked the Afghan capital on Thursday and smoke rose from a part of eastern Kabul near a neighborhood housing the U.S. Embassy, the NATO Resolute Support mission and other diplomatic missions. (AP Photo/Rahmat Gul)

KABUL, Afghanistan - Two NATO service members, including an American, were killed in Kabul on Thursday, military officials said, just days after the top U.S. negotiator said he had reached a peace deal “in principle” with the Taliban.

The U.S. and Romanian soldiers died in a Taliban-claimed car bombing in a heavily fortified part of central Kabul just after 10 a.m., a U.S. military official confirmed. The Ministry of Interior originally said 10 people had died in the attack.

This brings the number of U.S. troops killed in combat in Afghanistan to 16 this year.

Plumes of smoke could be seen rising over the capital as casualties were transported to a nearby hospital.

The Taliban said in a statement that it had targeted a convoy of foreigners.

In footage circulating on social media, a van is seen entering a crowded traffic circle before exploding close to two white SUVs, a number of sedans and some pedestrians, including one who appeared to try to run from the scene just before the bomb detonated. In Kabul, white SUVs are often armored and used by diplomats, military officers and government officials.

The United States and the Taliban completed their ninth round of talks in Qatar on Sunday, and top U.S. negotiator Zalmay Khalilzad then flew straight to Kabul to brief officials here on the proposed plan.

Under the draft agreement, 5,400 U.S. troops would leave Afghanistan and five U.S. bases would close within about five months, pending President Trump's approval.

But Afghan officials expressed serious doubts over the pending deal this week, as the militant group claimed responsibility for the second deadly explosion in the capital in less than three days.

Two regional capitals were also attacked by the Taliban this past week.

"We therefore seek further clarifications about this document so that we can thoroughly assess potential threats and prevent them," he said.

At a campaign rally in Kabul after the explosion Thursday, Ghani's running mate, Amrullah Saleh, said of the peace talks: "This is a conspiracy. It is not peace.

"This is aimed at the division of Afghanistan, and we do not accept it," he added.

Harun Mir, an Afghan political analyst, said Afghans are especially concerned that the deal may not include a comprehensive cease-fire. If attacks against Afghan security forces continue, he said, it will undermine the U.S. mission in Afghanistan, which is supporting the Afghan military.

Intra-Afghan talks are supposed to immediately follow any peace deal between Washington and the Taliban. But disputes have emerged over the makeup of the Afghan government delegation and which topics will be on the table.

"There has to be at least an internal consensus among the Afghan political elite about what must be discussed with the Taliban, and so far we don't have this consensus in Kabul," Mir said. "We cannot engage in serious talks with this high degree of uncertainty."

On Monday, as Khalilzad appeared on Afghan television station ToloNews to discuss the agreement, a massive bomb detonated in eastern Kabul, just outside a compound housing foreigners.

The Taliban claimed responsibility for the attack, which killed at least 16 people, including one Romanian diplomat and Afghan civilians. The blast also ignited anger in the neighborhood housing the compound, known as the Green Village, where Afghan residents have been killed in earlier attacks targeting foreigners.

Another U.S. service member was also killed a week ago outside the capital.

The Washington Post’s Sharif Hassan contributed to this report.