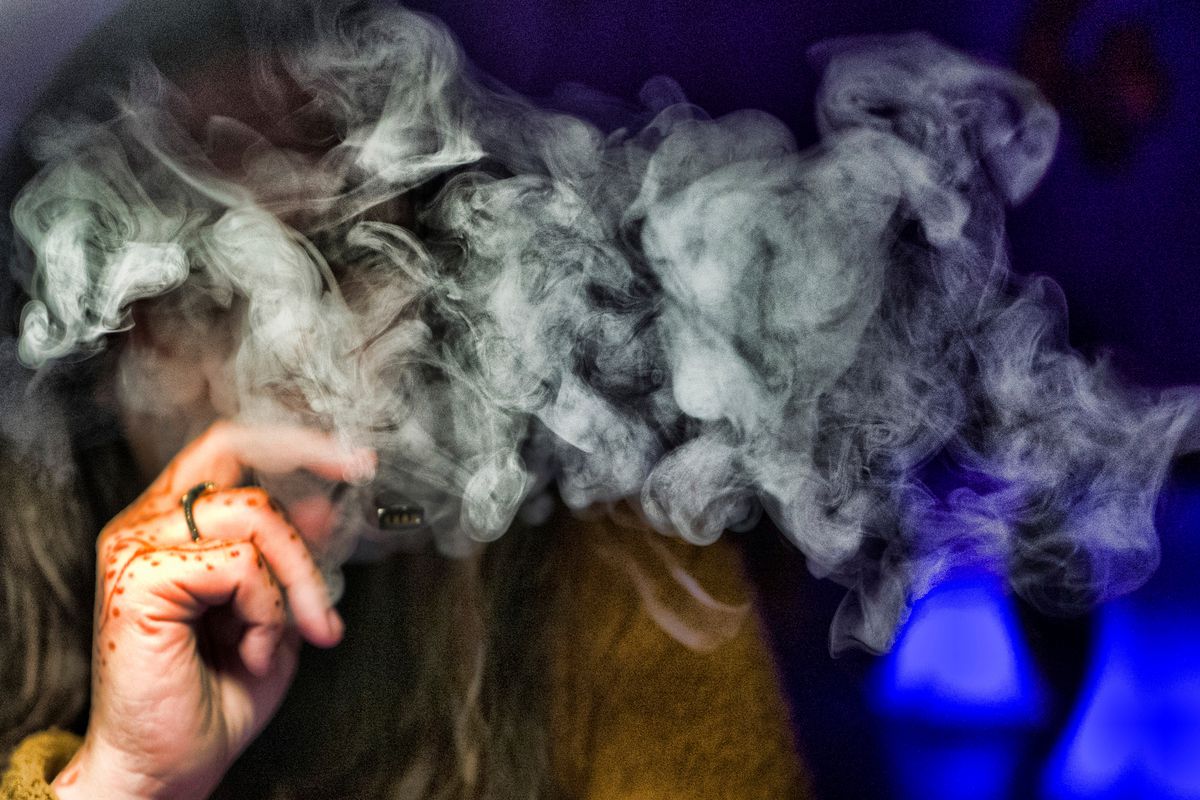 FILE - In this Saturday, Dec. 22, 2018 file photo, a woman takes a puff from a cannabis vape pen in Los Angeles. On Friday, Sept. 6, 2019, U.S. health officials are again urging people to stop vaping until they figure out why some are coming down with serious breathing illnesses. (AP Photo/Richard Vogel)

FILE - In this Saturday, Dec. 22, 2018 file photo, a woman takes a puff from a cannabis vape pen in Los Angeles. On Friday, Sept. 6, 2019, U.S. health officials are again urging people to stop vaping until they figure out why some are coming down with serious breathing illnesses. (AP Photo/Richard Vogel)

WASHINGTON - Health officials said Friday that a fifth person has died from a mysterious lung illness tied to vaping. There are now 450 possible cases in 33 states and one territory, five deaths, and one death under investigation, they said.

Amid the surge in cases, physicians and health officials in states with the earliest and largest number of cases published detailed descriptions of the acute lung disorder in people who vape in a series of articles in the New England Journal of Medicine and described the trend as "worrisome."

Although federal and state officials said the definitive cause of the illness remains unknown, "the severity of the illness and the recent increase in the incidence of this clinical syndrome indicates that these cases represent a new or newly recognized and worrisome cluster of pulmonary disease related to vaping," according to a report by health department officials in Wisconsin and Illinois, who conducted a joint investigation of 53 patients.

The Centers for Disease Control and Prevention warned that no consistent e-cigarette products have been linked to the disorder, and that while some victims used marijuana-based products, some reported using marijuana and nicotine products, and a smaller group reported using nicotine only.

"We are getting a clearer focus, and the investigation is narrowing," said Ileana Arias, the acting deputy director for noninfectious diseases at CDC.

No specific device or substance has been linked to all the cases, officials said. The Food and Drug Administration is analyzing samples collected from patients across the country who have fallen ill and is testing them for a broad range of chemicals, including nicotine, THC - the active ingredient in marijuana that produces the high - and "cutting agents" to dilute solutions and other substances.

"We believe chemical exposure is likely associated with the illnesses," said Dana Meaney-Delman, who is heading CDC's lung injury response.

This week, New York state and FDA labs told officials they found vitamin E acetate, an oil derived from vitamin E, in samples of marijuana products collected from patients who had been sickened by vaping. New York state officials have said the oil is a key focus of the state's investigation. FDA officials have stressed, however, that no one substance, including vitamin E acetate, has been identified in all samples. Identifying compounds in samples won't necessarily answer questions about causality, they said.

The Indiana State Department of Health this week reported the state's first vaping-related death. The person died "due to severe lung injury linked to a history of e-cigarette use or 'vaping,'" according to health officials. The death was confirmed on Thursday and the patient was identified only as being over the age of 18.

On Friday, the Minnesota health department said a 65-year-old patient died in August due to lung injuries related to vaping. The patient died after a "long and complicated hospitalization," officials said.

The rising case counts drew an angry tweet from Sen. Dick Durbin, D-Ill., who threatened to call for the resignation of acting FDA chief Ned Sharpless.

Even though the definitive cause remains unknown, the mysterious lung illness is coming into focus as officials and clinicians identified clinical similarities in illnesses among people who use e-cigarettes, or vape. Preliminary reports released Friday from clinicians and state health departments in Wisconsin, Illinois, North Carolina and Utah confirm and strengthen patterns that individual doctors treating patients have described.

Most patients have been young and healthy. They had similar symptoms, including cough, chest pain or shortness of breath that appeared to take place over several days to several weeks before hospitalization, according to a CDC report released Friday. All patients reported using e-cigarettes, which officials define as battery-operated devices that heat a liquid and deliver an aerosolized product.

Clinicians in Utah and North Carolina said they had identified the presence of abnormal immune cells in the lungs of some patients, which could be a "useful marker" for a diagnosis of a rare form of pneumonia known as lipoid pneumonia, according to findings reported by University of Utah Hospital clinicians in the New England Journal of Medicine Friday.

"That can occur when either oils or lipid-containing substances enter the lungs," said Daniel Fox, a pulmonologist and critical care physician at WakeMed Health and Hospitals in North Carolina. Fox said he had treated five patients, and those cases are being reported Friday by North Carolina's health department.

In the joint investigation by Wisconsin and Illinois health departments, the earliest report of symptoms took place in mid-April. Most of the 53 patients were young healthy men, with a median age of 19. All but three patients were hospitalized. More than half required intensive care. One-third needed respirators to keep breathing. All used e-cigarettes or related products within 90 days of getting sick; a significant number reported vaping in the week before falling ill.

About 84 percent of the patients told clinicians they used THC in e-cig devices. They reported using 14 different brands of THC products; the most common one was marketed under the "Dank Vape" label. That label is sold online and industry sources say marketers often fill an empty cartridge with potentially unsafe ingredients and sell to unsuspecting customers.

Fifteen patients said they only used THC products; seven said they used nicotine-only products, adding to the mystery of what exactly has caused healthy teenagers and young adults to suffer such severe injuries. Doctors have said that patients, especially teens, are often reluctant to say whether they have used marijuana products.

Many of the chemicals in e-cigarette liquids may "undergo thermal degradation" when they are heated, producing new compounds with potentially harmful consequences. "Alone or in combination, these substances could result in a variety of pulmonary illnesses," the authors of the NEJM paper on the Wisconsin and Illinois investigation wrote. The illnesses could include lipoid pneumonia and could result in severe lung injury and a very serious condition known as acute respiratory distress syndrome.

E-cigarettes are commonly used to inhale nicotine but can also be used to deliver THC, CBD and butane hash oils known as "dabs." Although previous reports have detailed severe lung illnesses among people who have used nicotine or cannabis extracts in e-cigarettes, there haven't been large clusters of pulmonary illnesses occurring at the same time that have been linked to e-cigarettes, the Wisconsin and Illinois authors wrote.

"It is notable that case patients in Wisconsin and Illinois presented with similar clinical findings and progression of disease, which suggests a similar pathophysiological mechanism of lung injury," the authors wrote.

After comparing emergency room visits for complaints about severe respiratory illnesses, Illinois officials found an increase of cases in 2019, starting in May and June. “That would suggest that it’s a new phenomenon,” said Jennifer Layden, chief medical officer at the Illinois health department.