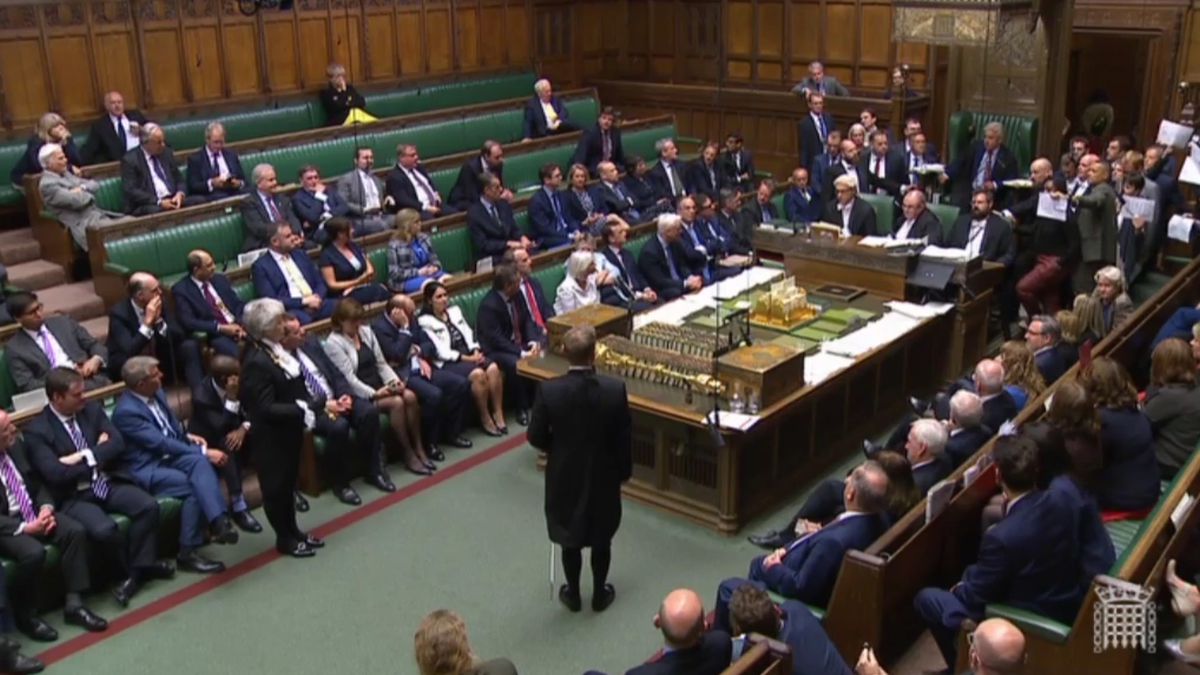 In this image made from video, British lawmakers stage a protest in the House of Commons before prorogation of Parliament, in London, Tuesday Sept. 10, 2019. The British government has formally suspended Parliament, sending lawmakers home for five weeks amid a Brexit crisis. (Parliament TV via PA via AP)

In this image made from video, British lawmakers stage a protest in the House of Commons before prorogation of Parliament, in London, Tuesday Sept. 10, 2019. The British government has formally suspended Parliament, sending lawmakers home for five weeks amid a Brexit crisis. (Parliament TV via PA via AP)

LONDON - A panel of three Scottish judges ruled Wednesday morning that Boris Johnson’s decision to suspend Parliament was illegal, escalating an already passionate debate over whether the British prime minister respects the rule of law and throwing into even greater doubt his plans for Brexit.

The ruling does not mean that Parliament will immediately come back into session. But it does give the prime minister's opponents hope ahead of an expected Supreme Court hearing next week. Some even raised the prospect that Johnson will have to resign if he loses that case.

The Scottish judges ruled that the government had been misleading - including, perhaps, to the queen - about its real reasons for the five-week suspension and that the move was "unlawful because it had the purpose of stymying Parliament."

The Supreme Court case is likely to be heard on Tuesday after the prime minister's office said it would appeal the Scottish ruling. "We are disappointed by today's decision," Downing Street said. A government spokesperson later ruled out recalling Parliament at least until the Supreme Court has a chance to weigh in.

Johnson critics celebrated the court decision, saying they had been "vindicated."

"You cannot break the law with impunity, Boris Johnson," Joanna Cherry, one of 75 lawmakers who brought the case in Scotland, told reporters outside the court in Edinburgh. "The rule of law will be upheld by Scotland's courts, and I hope also the Supreme Court of the United Kingdom."

The leader of Cherry's Scottish National Party, Nicola Sturgeon, called for Parliament to be "recalled immediately to allow the essential work of scrutiny to continue."

The Labour Party joined that demand. "This ruling shows that, despite what Boris Johnson has spent his privileged life thinking, he is not above the law," said Shami Chakrabarti, Labour's point person on legal issues.

Meanwhile, Dominic Grieve, a former attorney general, said fellow Conservative Johnson should step down if it turns out that he "had misled the queen about the reasons for suspending Parliament," he told the BBC. "That would be a very serious matter indeed. Indeed, in my view, it would then be the moment for Mr. Johnson to resign, and very swiftly."

Queen Elizabeth II had agreed to prorogue - or suspend - Parliament, on the advice of the prime minister, as is customary.

The court battle over suspension could ultimately be a prelude to yet another legal battle that may arise from Brexit. Parliament last week passed a law requiring Johnson to seek an extension to the Oct. 31 deadline for Britain's exit from the European Union if Johnson cannot strike a deal before then.

But the prime minister has repeatedly insisted he will not request the delay - he said last week he would "rather be dead in a ditch - and unnamed advisers have told the British press that Downing Street intends to "sabotage" the law.

Hard-line Brexit lawmakers have gone further, urging the prime minister to become "a martyr" to the cause and defy Parliament, even if it means being held in contempt of court and sent to jail. A survey by the polling firm YouGov this week found that 52 percent of Britons who backed "leave" in the Brexit referendum want Johnson to break the law if that's necessary to get Britain out of the EU.

Cabinet ministers have played down the idea of the prime minister breaking the law, but have acknowledged that the government intends to "challenge the law to its limit."

To some, the brewing standoff - when coupled with the court challenge over suspension - reflects an inner circle around the prime minister that lacks the respect for laws and conventions that had been a given in previous governments.

Christopher Carman, a politics professor at the University of Glasgow, said he did not expect Johnson to go to jail. But he said Johnson's team would be "huddled in Number 10, trying to figure out how they can strictly comply with the law but perhaps not the spirit of the law."

He noted that one idea recently discussed was Johnson sending the EU a request asking for a delay, along with a second letter saying that he didn't intend to use the delay.

Such a move would likely spawn a revolt in Parliament, where a majority of lawmakers, including renegade Conservatives, made clear last week they don't want a no-deal exit.

Parliament is not due to come back into session until mid-October under a plan that Johnson's critics have charged was aimed at leading Britain over the cliff-edge of no-deal before lawmakers had time to block it. But that appeared to backfire this week as lawmakers rebelled.

Suspending Parliament is not unusual. It often happens once a year, usually around May, before the government lays out its legislative agenda. But the length of the break and the timing prompted outrage - as well as legal challenges.

At five weeks, the suspension is the longest since 1945, and it comes during what many observers believe to be Britain's greatest peacetime crisis since the end of World War II.

Thousands of protesters took to the streets to demonstrate against what they called a "coup." And in the early hours of Tuesday, opposition lawmakers attempted to halt the suspension by physically preventing Speaker John Bercow from leaving his chair. They also held aloft signs reading "Silenced," and chanted "Shame! Shame!" at their Conservative colleagues in one of the rowdiest sessions that many longtime parliamentary observers could remember.

The prime minister's office said suspending Parliament was "the legal and necessary way" for the government to "bring forward a strong domestic legislative agenda."

But the judges found that that explanation was misleading, calling the government's behavior "an egregious case of a clear failure to comply with generally accepted standards of behavior of public authorities."

Cherry said the suspension was intended to "prevent us representing our constituents' views and to prevent us scrutinizing them as they try to take us through a back door toward a no-deal Brexit."

Wednesday's ruling contradicts two earlier judgments from last week. Judges for England and Wales had ruled that Johnson's move was legal. A Scottish judge, meanwhile, had decided that the courts did not have the authority to interfere in the suspension.

With Brexit in the balance, the outcome of the case next week could have high stakes. A return of Parliament would add even more unpredictability to an already confused environment, and give lawmakers greater chance to have their say as Johnson attempts to strike a deal with the EU.

Wednesday's decision is "incredibly bold," said McLean. "Boris lied to the queen, is what it comes down to."

He said he still thought that the Supreme Court would rule the other way, “and so it could be a weak victory for the anti-Brexiteers. But who knows?”