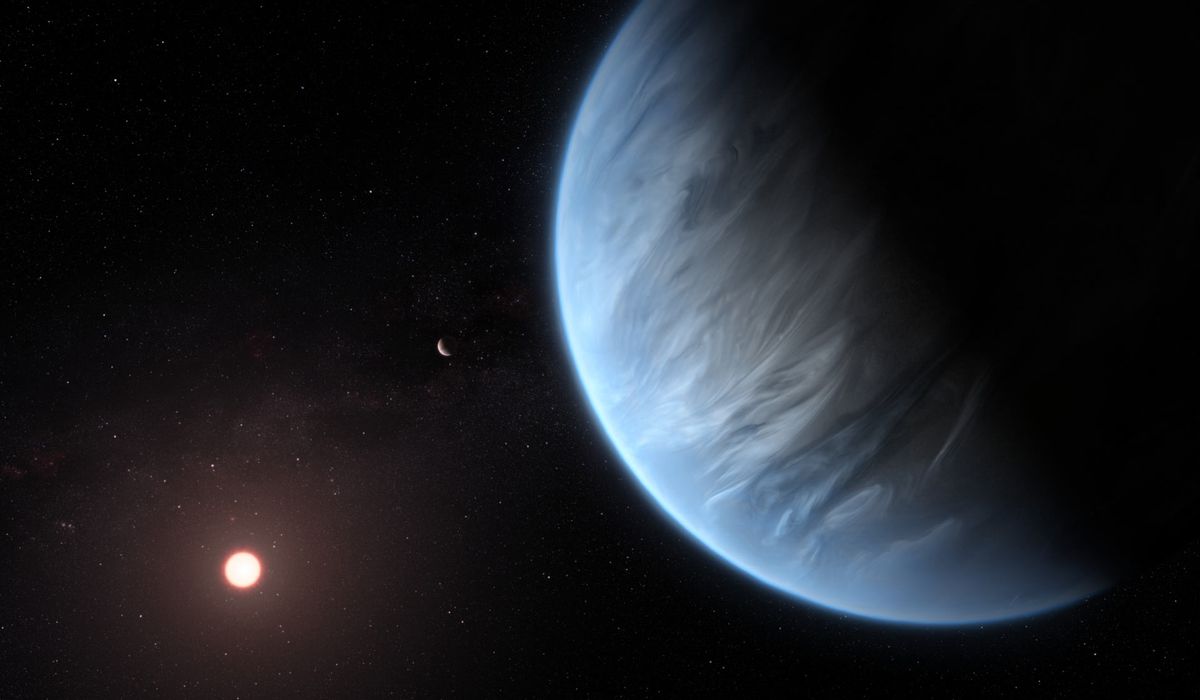 In the dim, red light of an alien sun, scientists have found the first evidence for water in the atmosphere of a rocky planet - offering a tantalizing new target in the search for life in the universe.

The intriguing world, which goes by the impersonal designation K2-18b, lies 110 light-years away in the constellation Leo. More important: It sits in its star's "habitable zone," where it is bathed in the right amount of warmth to allow for liquid water on its surface.

Twice as large as our own planet and eight times as massive, K2-18b possesses powerful gravity that would make it difficult to walk upon. It orbits close to a red dwarf star, much smaller and cooler than our sun. And aside from water vapor, its atmosphere contains mostly hydrogen gas - a molecule that makes up less than 1 part per million of our own atmosphere.

It is no “second Earth,” said astronomer Angelos Tsiaras, the lead author of a study on the planet published Wednesday in the journal Nature Astronomy, but “this is the best candidate for habitability that we know right now.”

It is no "second Earth," said astronomer Angelos Tsiaras, the lead author of a study on the planet published Wednesday in the journal Nature Astronomy. But he believes it is "the best candidate for habitability that we know right now."

The paper by Tsiaras draws on publicly available data produced by Björn Benneke, a planetary astronomer at the University of Montreal in Canada. On Tuesday, Benneke’s team posted its own analysis of K2-18b on the preprint server arXiv, which hosts academic papers not yet published in peer-reviewed journals.

Benneke and his colleagues also found signatures of water vapor in K2-18b's skies. But they were less optimistic than Tsiaras about the potential habitability of this world. The Montreal-based team's interpretation of its data suggests the hydrogen atmosphere forms a thick, gaseous envelope around the planet. This would generate intense pressures at the planet's surface - perhaps enough to push hydrogen into a liquid form.

"It is not a true Earth analogue," the researchers report.

Laura Kreidberg, an astronomer at the Harvard-Smithsonian Center for Astrophysics, said that K2-18b might be better described as a "mini-Neptune" than a "super Earth." Extensive research with computer models suggests that, at 1.6 to 1.8 times the mass of Earth, planets tend to become huge and gaseous, rather than rocky.

Though K2-18b is likely solid at its core, the temperatures and pressures at the "surface" would be so high that few complex molecules would survive, let alone any life forms.

"I think the result is amazing," said Kreidberg. "It's definitely the smallest and coolest planet that we've had a glimpse into the atmosphere of so far. . . . But I don't think it's potentially habitable."

Scientists had detected water only in the atmospheres of "gas giants" - huge exoplanets that lack solid surfaces, much like Jupiter and Saturn in our solar system. Rocky exoplanets are smaller, making them harder to find and more difficult to study. Even a planet like K2-18b can be examined only with humanity's most sensitive space telescope - the Hubble.

When K2-18b was discovered in 2015, Tsiaras and his colleagues thought it would be a good candidate for a form of analysis called transit spectroscopy, which involves studying the changes in a star's light as a planet "transits," or passes in front of it.

The planet is so close to its cool host star that it takes just 33 days to orbit. So, month after month, the researchers waited with Hubble to capture the moment of transit.

As the starlight filtered through the planet's atmosphere, some of it would be absorbed by the gases in the planet's air. By separating the light into its component parts, the scientists could look for signatures of particular molecules.

The Hubble isn't sensitive to the right types of light to detect other important molecules, such as nitrogen or methane, so the researchers can only speculate about the precise composition of the atmosphere. The planet could have thick clouds, like Venus, that would heat its surface to an intolerable degree. Or its atmosphere might be so thin and insubstantial that it offers no protection from the perils of space, like the atmosphere of Mars.

Researchers must wait for more sophisticated tools, such as the long-delayed James Webb Space Telescope, to reveal more details about the distant world.

Yet Giovanna Tinetti, a colleague of Tsiaras's at University College London and a co-author of the Nature study, suggested it's still possible that there is liquid water somewhere below the atmosphere.

“We’re going to need more observations,” she said. “We need to know much more about the planet.”