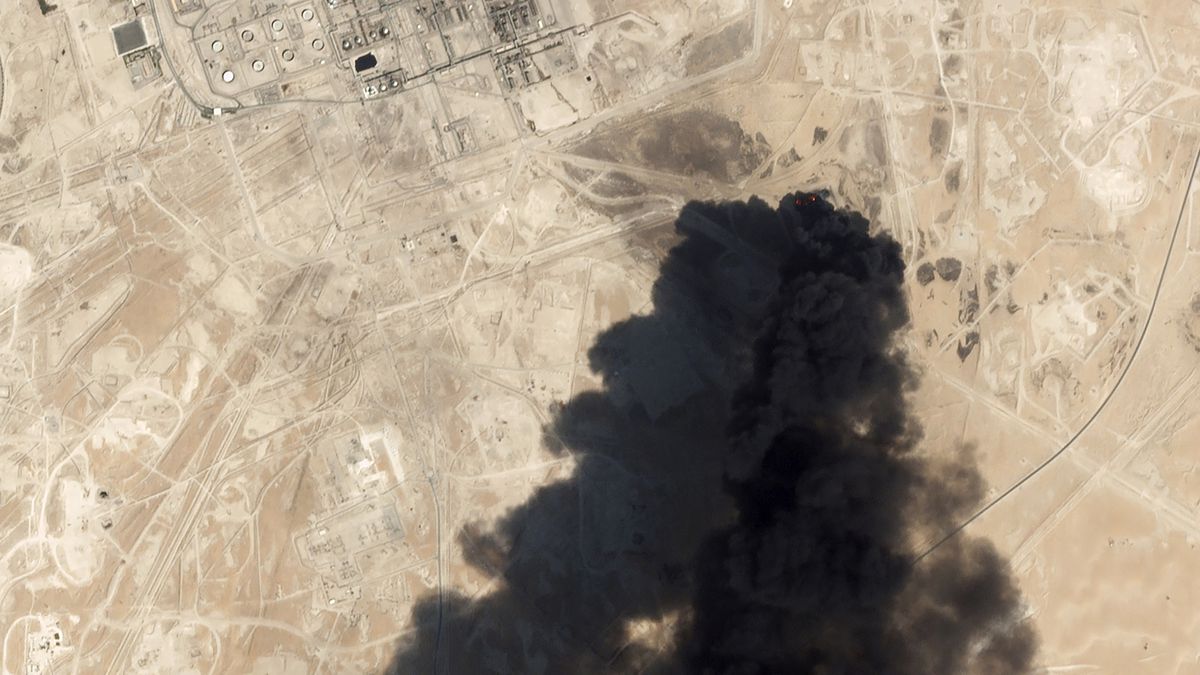 FILE - This Saturday, Sept. 14, 2019, satellite image from Planet Labs Inc., shows thick black smoke rising from Saudi Aramco's Abqaiq oil processing facility in Buqyaq, Saudi Arabia.The weekend drone attack on one of the world’s largest crude oil processing plants that dramatically cut into global oil supplies is the most visible sign yet of how Aramco’s stability and security is directly linked to that of its owner -- the Saudi government and its ruling family. (Planet Labs Inc via AP, File)

FILE - This Saturday, Sept. 14, 2019, satellite image from Planet Labs Inc., shows thick black smoke rising from Saudi Aramco's Abqaiq oil processing facility in Buqyaq, Saudi Arabia.The weekend drone attack on one of the world’s largest crude oil processing plants that dramatically cut into global oil supplies is the most visible sign yet of how Aramco’s stability and security is directly linked to that of its owner -- the Saudi government and its ruling family. (Planet Labs Inc via AP, File)

The new threat came as U.S. officials were pointing fingers at Iran and its other proxies around the region and President Donald Trump said the United States was "locked and loaded" and ready to respond.

A Saudi military spokesman said Monday that a preliminary investigation found that the weapons used against the facilities were Iranian.In a televised briefing, Col. Turki al-Malki, a spokesman for a Saudi-led coalition in Yemen, also said the attacks did not originate in Yemen and that investigations were underway to determine the launch location.

Iran has denied any involvement. China and European countries have warned against hastily assigning blame.

The Iran-backed rebels warned foreigners to leave the area of Saturday's attacks, which targeted installations belonging to the state-owned oil company, Aramco. The facilities could be attacked again at "any moment," a Houthi military spokesman said.

"We assure the Saudi regime that our long hand can reach wherever we want, and whenever we want," spokesman Yahya Saree said in a statement, adding that drones modified with jet engines were used in the operation Saturday.

The Houthis, who seized Yemen's capital from the internationally recognized government in 2014, have been fighting a devastating war against a Saudi-led coalition in Yemen and, according to U.S. and Saudi officials, have received military and logistics support from Iran.

U.S. officials, including Secretary of State Mike Pompeo, have blamed Iran directly for the attacks, saying that the assault did not come from Yemen. Pompeo did not offer evidence for the claim, which he tweeted on Saturday.

The Houthis also have not provided any proof to support their assertion that they carried out the strikes on the Saudi oil installations, using what they said was a fleet of 10 drones."We don't need to provide evidence," Mohammed Albukhaiti, another Houthi spokesman, said in a phone interview Sunday.

"In terms of who is responsible, the picture is not entirely clear," British Foreign Secretary Dominic Raab said, according to Reuters. "I want to have a very clear picture, which we will be having shortly.

German Foreign Minister Heiko Maas told a news conference that Germany was working with its partners to find out who carried out the attacks, while in Beijing, China's Foreign Ministry also warned against naming a culprit "without conclusive facts."

For its part, the Russian Foreign Ministry warned against blaming Iran, saying that "jumping to conclusions" as the United States often does is "counterproductive" and called military retaliation "unacceptable."

Trump had said late Sunday that the United States was prepared to respond to the devastating attacks on two oil installations in Saudi Arabia that halved the state oil company's output.

"There is reason to believe that we know the culprit," Trump said in a tweet Sunday evening. He said the United States was "locked and loaded depending on verification."

Trump did not name Iran or specify whether he was contemplating a military response. He said he was waiting to hear from the Saudis on "who they believe was the cause of this attack, and under what terms we would proceed!"

Returning to Twitter on Monday morning, Trump wrote: "Remember when Iran shot down a drone, saying knowingly that it was in their 'airspace' when, in fact, it was nowhere close. They stuck strongly to that story knowing that it was a very big lie. Now they say that they had nothing to do with the attack on Saudi Arabia. We'll see?"Trump referred to the downing of a U.S. surveillance drone by an Iranian missile in June over the Strait of Hormuz. The drone's exact location when it was struck, and whether it ever crossed into Iranian airspace during its flight, remain in dispute. Iran said it recovered pieces of the drone from its territorial waters.

Trump's administration was contemplating what U.S. officials characterized as a serious military response, although some in the Pentagon were said to be urging restraint. The officials spoke on the condition of anonymity to discuss internal deliberations.

Iraq's prime minister said Monday that he had spoken to Pompeo overnight, with both agreeing that the strike had not been launched from Iraq. The U.S. has limited visibility over Iraqi airspace, since the U.S-led coalition's mandate there is restricted to monitoring the movements of Islamic State militants.

Oil futures jumped Sunday evening as markets opened for the first time since the attacks. The price of Brent crude surged 18 percent before falling back to a 12 percent increase; the U.S. benchmark West Texas intermediate climbed 12 percent before easing to a 10 percent gain. Trump said he had authorized the release of oil from strategic reserves, "if needed," to blunt the market impact of the attacks.

The attacks on Saturday could upend Trump's hopes for new U.S.-Iran negotiations, an effort in which he has faced opposition from close ally Israel and many of his own hawkish foreign policy aides. Trump said last week that he would not rule out a meeting with Iranian President Hassan Rouhani this month.

His comments, along with a U.S. government damage assessment of one of the stricken oil facilities, fed speculation that the strikes were launched from Iran, or by Tehran's allies in neighboring Iraq.

The U.S. government's working assumption is that the attacks did not come from Yemen, meaning the Houthis either were not involved in the attacks or did not carry them out on their own, according to a U.S. official familiar with ongoing discussions. The official cited the advanced nature of the strikes as reason for that position.

Saudi Arabia, which said Saturday that it was still probing the source of the attacks, was silent on Sunday about the possible culprit. Media outlets in Kuwait, which sits between Iraq and Saudi Arabia, reported that officials were investigating a drone sighting over the country, deepening the mystery.

The possibility that Iran had played a direct role in an assault on Saudi Arabia's oil infrastructure unnerved a region already reeling from multiple conflicts: a war in Yemen, a feud between Qatar and its neighbors, and the confrontation between the United States and Iran.

The Trump administration has made isolating Iran a centerpiece of its foreign policy. The administration withdrew from the 2015 nuclear deal Tehran struck with world powers and imposed economic sanctions and an embargo on oil exports.

The United States blamed Iran for mysterious attacks on commercial tankers in the Persian Gulf region and accused it of shooting down a U.S. Navy spy drone over international waters. That June incident nearly prompted a U.S. counterstrike. Trump said he called off the attack at the last minute, on grounds it would be disproportionate and a hindrance to diplomacy.

The incident opened a window on Trump's dual approach to Iran, which has increasingly included invitations for negotiations to replace the 2015 deal with one he says would be stronger.

Trump's desire to meet Rouhani with no preconditions has roiled his own advisers and was a factor in last week's departure of national security adviser John Bolton. Bolton opposed calling off the strike in June and was deeply skeptical of the value of new diplomacy with Iran. A person close to Bolton said Saturday that Bolton had submitted his resignation after a suggestion from Trump a week ago that the United States could drop some sanctions as a sweetener for talks.

Iran on Monday said there were no plans for Rouhani to meet with Trump on the sidelines of the United Nations General Assembly later this month. Iranian officials have repeatedly said that they will not negotiate with the United States as long as U.S. sanctions against Iran are in place.

A meeting between Trump and Rouhani "is not on our agenda, nor will it happen," Foreign Ministry spokesman Abbas Mousavi said in comments carried by Iranian state media. He said Iran would welcome a U.S. return to the 2015 nuclear deal Tehran struck with world powers. Trump withdrew from the agreement last year and reimposed a trade embargo on Iran.

A senior Kuwaiti diplomat said his government was "extremely concerned" about the region's stability after the weekend attacks. The diplomat, who spoke on the condition of anonymity because he was not authorized to talk to the media, did not say whether Kuwait thought Iran was directly involved.

The attacks on Aramco "aimed to disrupt oil markets worldwide and to undermine regional stability," he said. "It's a very dangerous period in the gulf region."

Officials in Iran pushed back forcefully Sunday against allegations that the attacks had come from their territory.

The weekend incident will probably heighten concerns at the Pentagon that increasing tensions with Iran expose U.S. troops, who are stationed at facilities across the Middle East, to greater risk of Iranian-sponsored attack.

Bernard Hudson, a former director of counterterrorism for the CIA, said the attacks probably involved a mix of drones and cruise missiles.

"It used to be that only governments had air forces, but drones have democratized violence from the sky," said Hudson, now a fellow on Persian Gulf security issues at Harvard University. "The Houthis, with help and advice from Iran, have perfected it to a level no one else has done."

The blasts on Saturday struck facilities in the districts of Khurais and Abqaiq, Saudi officials said, and the attacks forced the kingdom to suspend production of 5.7 million barrels of crude per day, or more than half its output.

A U.S. assessment found that 15 structures at Abqaiq were damaged on the west-northwest-facing sides - not the southern facades, as would be expected if the attack had come from Yemen.

Oil industry analysts were trying to assess the extent of the damage. Aramco initially said it would be ready to supply all its customers on Monday, but by Sunday that appeared unlikely.

"In the short term Saudi Arabia will be able to maintain exports and use reserves to ensure supply security," the information analysis firm S&P Global said. But "any evidence of prolonged disruption of production would heavily impact [OPEC's] spare capacity and the ability of International Energy Agency to use Strategic Petroleum Reserves to shore up the market."

The firm said "higher oil prices would add to the headwinds facing the global economy" and "could tip it into recession which would itself limit any prolonged period of excessively high oil prices as demand rebalances the market."

Dmitry Peskov, the Kremlin spokesman, said Monday that it is too early to predict whether Russia will step up oil production following the attacks on the Saudi installations.

"It is necessary to wait first," he said. "Saudi Arabia says they will be restoring the volumes in the near future. Therefore, it is necessary just to wait to see what the Saudis can do and then closely follow the developments on the oil market."

Gearan and Mufson reported from Washington. Will Englund in Moscow, Louisa Loveluck in Baghdad, Ali Al-Mujahed in Sanaa, Yemen, and Missy Ryan, Dan Lamothe and Carol Morello in Washington contributed to this report.