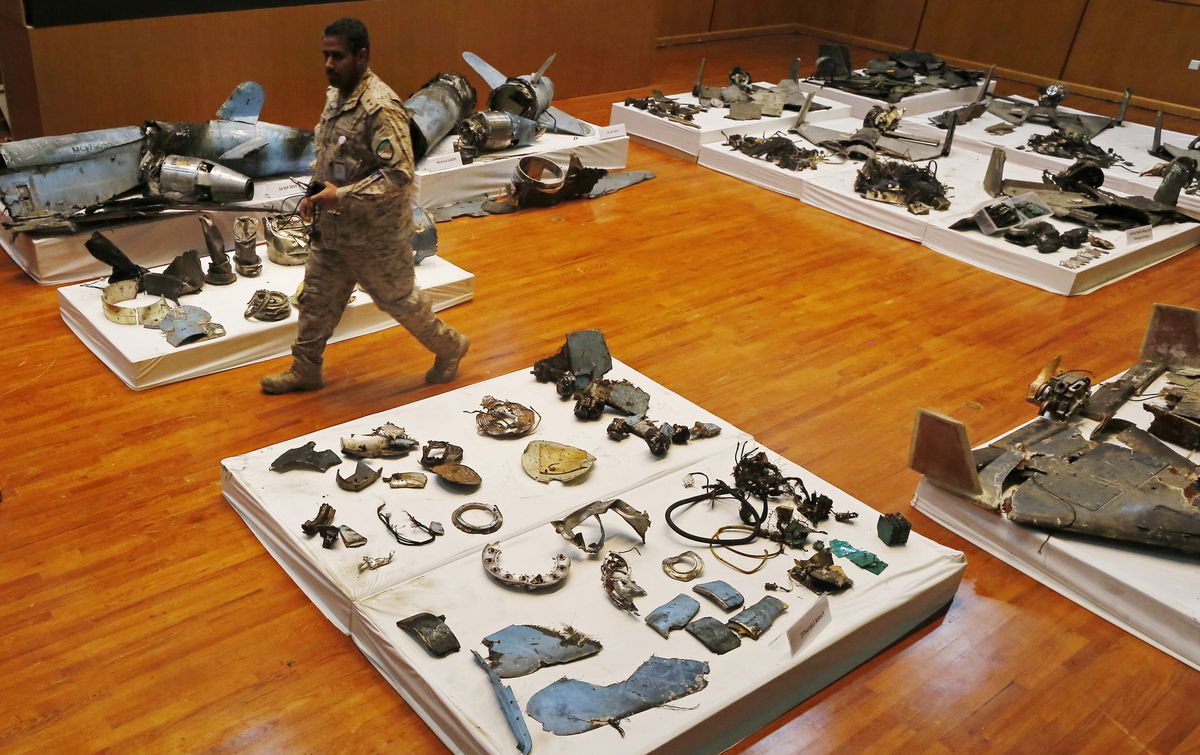 A Saudi military officer walks by what was described asa the remains of Iranian cruise missiles and drones used in an attack this weekend that targeted the heart of Saudi Arabia's oil industry, during a press conference by military spokesman Col. Turki al-Malki in Riyadh, Saudi Arabia, Wednesday, Sept. 18, 2019. Though Yemen's Houthi rebels claimed the assault, the U.S. alleges Iran was behind it. (AP Photo/Amr Nabil)

A Saudi military officer walks by what was described asa the remains of Iranian cruise missiles and drones used in an attack this weekend that targeted the heart of Saudi Arabia's oil industry, during a press conference by military spokesman Col. Turki al-Malki in Riyadh, Saudi Arabia, Wednesday, Sept. 18, 2019. Though Yemen's Houthi rebels claimed the assault, the U.S. alleges Iran was behind it. (AP Photo/Amr Nabil)

Secretary of State Mike Pompeo on Wednesday decried the weekend attacks on the Saudi oil industry as an “act of war” as President Donald Trump ordered a substantial increase in sanctions against Iran, which Washington has linked to the strikes.

Amid the escalating tensions in the region, Saudi Arabia on Wednesday presented remnants of what it said were Iranian-made weapons used in the attacks on two key oil facilities. Meanwhile, Iran warned the United States that it would broadly retaliate against any attacks on it, Iranian news agencies reported.

"I have just instructed the Secretary of the Treasury to substantially increase Sanctions on the country of Iran!" Trump wrote on Twitter, without elaboration. It was not immediately clear what the increase in sanctions might entail.

The comment came as Pompeo arrived in Saudi Arabia, where he is set to meet with Crown Prince Mohammed bin Salman.

Iran’s warning, sent via the Swiss Embassy in Tehran, which handles U.S. affairs in the country, condemned earlier remarks by Pompeo and other officials linking Iran to the attacks.

"Iran's response will be prompt and strong, and it may include broader areas than the source of attacks," the Mehr News Agency reported the official note as saying.

Iran's Fars News Agency said any response would be "rapid and crushing" and would target "more extensive areas than the origin of the attack." There have long been fears that Iranian proxy forces in Lebanon, Syria, Iraq and elsewhere might attack U.S. forces in the region.

Yemeni Houthi rebels asserted responsibility for Saturday's attacks, which temporarily cut Saudi Arabia's oil production in half and sent prices spiking worldwide. U.S. officials, however, have cast doubt on the rebels' involvement, saying the attacks were too sophisticated for them to have carried out.

Pompeo told reporters shortly before arriving in Saudi Arabia that the intelligence community had "high confidence" that the weapons systems used in the attacks were not in the Houthis' arsenal.

"This was an Iranian attack," he said. "It didn't come from the Houthis."

Shortly after Trump's sanctions announcement on Wednesday, a Saudi military spokesman in Riyadh, the Saudi capital, presented what he said was evidence of Iran's culpability, including remnants of drone and cruise missiles that he said were Iranian-made and were used in the attacks.

The spokesman, Col. Turki al-Malki, said in the news conference that 18 unmanned aerial vehicles had attacked an oil processing plant in Abqaiq, in eastern Saudi Arabia. Seven cruise missiles, he added, were fired at a facility in Khurais, the site of one of the kingdom's largest oil fields. Three of the cruise missiles fell short, he said.

The attacks were "unquestionably sponsored by Iran" and had not originated in Yemen, Malki said, basing the assertion in part on the purported range of the weapons recovered, which he said could not have traveled from Houthi-held territory. But Saudi officials had not yet determined from where the weapons were launched.

Malki did not say how the launch site would be located but said there would be "accountability" when it was.

Trump has not blamed Iran directly for the attacks, however, pending an investigation of the incident, and has said he would “like to avoid” a war.

The chairman of the Joint Chiefs of Staff, Gen. Joseph Dunford, told reporters in London that Iran or its allies were likely to have been involved. He said U.S. military officials are reviewing how they could "help the Saudis defend themselves."

The attacks on Saudi oil infrastructure were the most serious in decades and far outstripped any past attacks by the Houthis on Saudi Arabia.

The rebels have been battling a Saudi-led coalition backing the internationally recognized government in Yemen since 2015. The conflict has caused the world's most severe humanitarian crisis.

In remarks to his cabinet, Iranian President Hassan Rouhani said the Houthi rebels were only responding to years of attacks and airstrikes.

"The Yemeni nation was not the source of the conflict, but it was Saudi Arabia, the UAE, the Americans," he said, according to Iranian media.

At the same cabinet meeting, Iran's defense minister, Brig. Gen. Amir Hatami, denied that Tehran had any role in the oil attacks. He noted that "the Yemenis carried out a similar operation around two years ago."

The tensions in the region center on a rivalry between Saudi Arabia and regional heavyweight Iran, especially in the Persian Gulf, a key international waterway for oil shipments. The United Arab Emirates is allied with the Saudis in that confrontation.

The United States has said Iran is behind attacks on ships moving through those waters over the summer - a charge that Iran denies.

Fahim reported from Istanbul, and Schemm from Dubai. The Washington Post’s Carol Morello in Washington contributed to this report.