Analysis: Trump’s Ukraine call reveals a president convinced of his own invincibility 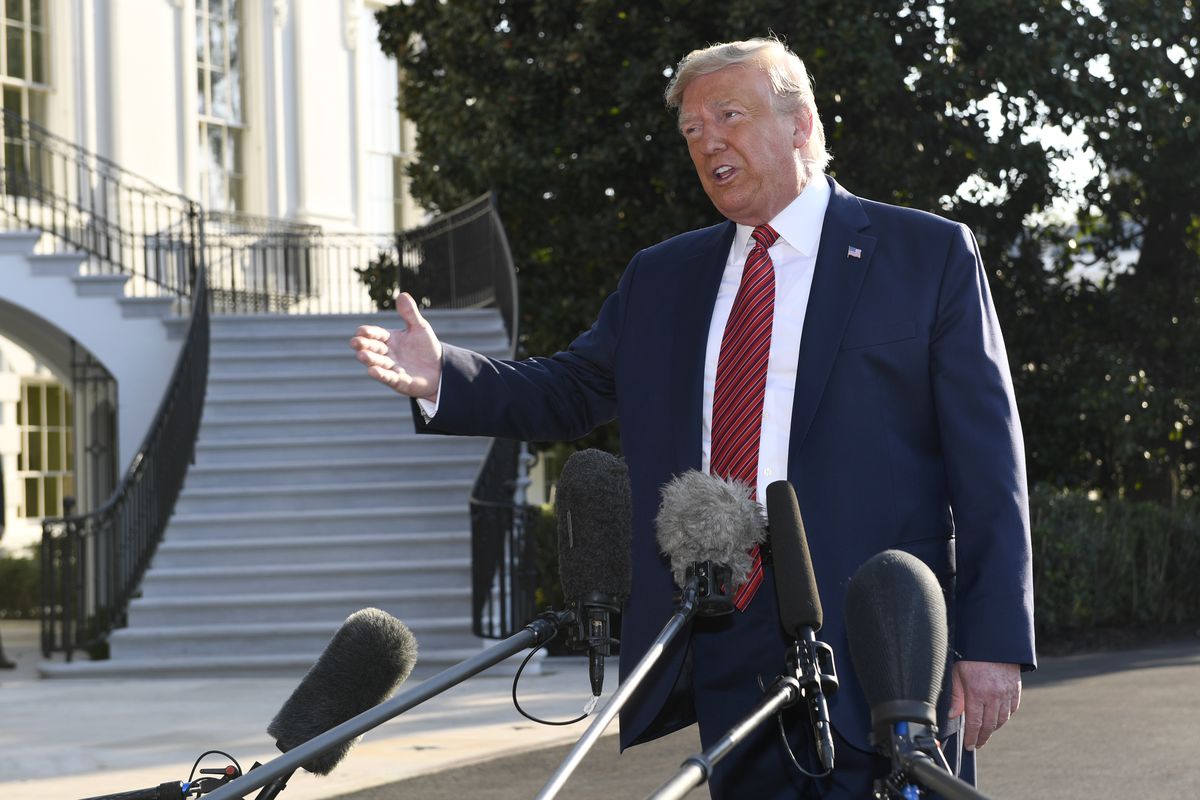 President Donald Trump talks with reporters on the South Lawn of the White House in Washington, Sunday, Sept. 22, 2019, as he prepares to board Marine One for the short trip to Andrews Air Force Base. Trump is traveling to Texas and Ohio before heading to New York for the upcoming United Nations General assembly. (AP Photo/Susan Walsh)

President Donald Trump talks with reporters on the South Lawn of the White House in Washington, Sunday, Sept. 22, 2019, as he prepares to board Marine One for the short trip to Andrews Air Force Base. Trump is traveling to Texas and Ohio before heading to New York for the upcoming United Nations General assembly. (AP Photo/Susan Walsh)

WASHINGTON - When the July 24 congressional testimony of special counsel Robert Mueller III deflated the impeachment hopes of Democrats, President Donald Trump crowed “no collusion” and claimed vindication from accusations that he had conspired with Russia in the 2016 election.

Then, the very next day, Trump allegedly sought to collude with another foreign country in the coming election - pressing Ukrainian President Volodymyr Zelensky to dig up what he believed would be damaging information about one of his leading Democratic challengers, former vice president Joe Biden, according to people familiar with the conversation.

The push by Trump and his personal attorney, Rudy Giuliani, to influence the newly elected Ukrainian leader reveals a president convinced of his own invincibility - apparently willing and even eager to wield the vast powers of the United States to taint a political foe and confident that no one could hold him back.

"We haven't seen anything like this in my lifetime," said William Galston, a senior fellow in governance at the Brookings Institution who graduated from college just before Watergate. "He appears to be daring the rest of the political system to stop him - and if it doesn't, he'll go further."

The effort - which came as the Trump administration was withholding financial and military support from Ukraine to help the small democracy protect itself against Russian aggression - illustrates Trump's expansive view of executive power and what appears to be a cavalier attitude about legal limits on his conduct.

While Mueller's investigation did not place Trump directly in the Russian conspiracy to interfere in the 2016 presidential election and boost Trump's candidacy, the president was an active participant in the Ukrainian episode, which was brought to light by an intelligence official's whistleblower complaint.

Trump has said he did nothing improper in his calls with Zelensky or any other foreign leader, and on Saturday he derided Democrats and the media for what he dubbed "the Ukraine Witch Hunt."

But the scrutiny surrounding the phone call has brought fresh peril to Trump's presidency and could turbocharge the drive by some House Democrats to open impeachment proceedings.

Democrats' frustration with their inability to check Trump and hold him accountable for his conduct after nine months in the majority is starting to boil over. Lawmakers for the first time are saying publicly that their caucus looks feckless, and some are fretting that their flimsy oversight and reliance on the courts to eventually rescue them have proved fruitless.

"We back off everything," said Rep. Steve Cohen, D-Tenn. "We've been very weak."

House Democrats already are probing whether Trump and Giuliani withheld U.S. assistance to the Ukrainian government until it agreed to investigate possible corruption involving Biden and his son, Hunter. But asked whether he or Trump were worried about congressional investigations, Giuliani laughed.

"They're a bunch of headhunters and have lost any credibility," the president's lawyer said.

Giuliani said new scrutiny of Trump's communications with Zelensky is welcome because it draws attention to Biden and his family's involvement in Ukraine.

"The reality is, the more the Democrats press for an investigation of what I did in the Ukraine, I invite it," Giuliani said. "I'm just doing my job as a poor, simple, little defense lawyer who's defending his client."

Former House speaker Newt Gingrich, a Trump ally, said the president has calculated that there is a political upside to spotlighting Ukraine and a story he believes "would crush Biden if people came to believe it was true."

"If you're going to be Andrew Jackson, there will be consequences, but he will be called 'the great disrupter,' " Gingrich said, drawing parallels between the seventh president and 45th. "He gets up every morning and thinks, 'What can I disrupt?' He's not going to back off."

Now he is alleged to have leveraged taxpayer dollars and U.S. military might to extort a foreign government for opposition research on a political opponent, and it is unclear what consequences, if any, he may face.

"We got progressively desensitized," said Joyce Vance, a former U.S. attorney in the Obama administration. "We're learning progressively about wrongs, and one part gets absorbed before the next part gets revealed, so for whatever reason the public doesn't get excited about it. It's mystifying."

One explanation is that Republicans in Congress have almost uniformly fallen in line behind Trump, reacting with instinctive nonchalance and blocking efforts to investigate his actions or hold him accountable.

"What we're discovering is that the Constitution is not a mechanism that runs by itself," Galston said. "Ultimately, we are a government of men and not law. The law has no force without people who are willing to enforce it. The ball is now squarely in the court of the Republican Party, and particularly Senate Republicans. Will they ever be prepared to say enough is enough?"

Legal experts said it is extraordinary that Trump allegedly sought political assistance from a foreign government after a tortured, nearly three-year national conversation about the illegality of doing so. Asked what the president had learned from the Mueller investigation, former Watergate prosecutor Nick Akerman said, "Nothing. Zero."

"I think he thinks it's perfectly OK," Akerman said. "This guy has got no scruples whatsoever. I don't think he would stop for a second."

Trump said in June that he would accept help with his 2020 reelection campaign from another country, which would be against the law.

"There's nothing wrong with listening," he told ABC News anchor George Stephanopoulos. "If somebody called from a country, Norway - 'We have information on your opponent' - oh, I think I'd want to hear it."

This past week, in a federal lawsuit in New York to block a subpoena issued by Manhattan prosecutors for his tax returns, Trump's lawyers argued the sweeping legal theory that the Constitution does not allow for the president to be criminally investigated while in office. While the Justice Department has concluded that a president could not be indicted while in office, it has never suggested that simply investigating one would be off limits.

Trump's moves in Ukraine are not a tertiary interest. For years, it has been a priority of the United States to boost the effective power of the Ukrainian military to form a bulwark against Russia.

Nicholas Burns, a former U.S. ambassador to NATO and a senior national security and diplomatic official in past Republican and Democratic administrations, said Ukraine has been "a major interest of the United States - and if the stories are true, the president cavalierly thrust the national interests aside in favor of his personal political interests."

"That is clearly wrong and clearly an abuse of power," added Burns, who is informally advising Biden on foreign policy.

Trump has mocked the media for covering the whistleblower complaint, which he derided Friday as a “partisan” attack. Right-wing media personalities have buoyed Trump amid the onslaught, disparaging the anonymous whistleblower as part of a “deep state” conspiracy to remove the president from office.

"The coup actually is ongoing; it hasn't stopped," Rush Limbaugh insisted to his listeners this past week on his radio program, claiming there were "speech police" in the intelligence community.

Matthew Whitaker, Trump's former acting attorney general, said on Fox News Channel, "This is a clear example of someone that's part of the deep state in the intelligence community taking advantage of this whistleblower procedure and then trying to create this firestorm."

Sen. Chris Murphy, D-Conn., a member of the Foreign Relations Committee who recently met with Zelensky in Ukraine, said he and other Democrats are frustrated with the pervasive culture of inaction among congressional Republicans.

"If it's true that the president requested that the president of Ukraine interfere in an American election, we are in really dangerous, brand-new territory," Murphy said. "That's absolutely, completely unacceptable in a democracy."

House Speaker Nancy Pelosi, D-Calif., often declares that "no one is above the law" and has vowed that her party would hold Trump "accountable."

But she has refused so far to green-light impeachment proceedings - creating tensions with House Judiciary Committee Chairman Jerrold Nadler, D-N.Y., among others who favor impeachment - and instead has looked to the courts to counter the White House's moves to stonewall Congress.

"When are we going to get serious about enforcing our subpoenas?" asked a frustrated Rep. Gerald Connolly, D-Va., who has pushed for leadership to fine Trump officials who are not compliant with their investigations. "We have to put some teeth into this."

Some Democrats have gone so far as to suggest that House Democrats' unwillingness to impeach Trump has only encouraged the president's lawlessness.

"After the Mueller report, Congress had a duty to begin impeachment," Sen. Elizabeth Warren of Massachusetts, a top-tier Democratic presidential candidate, wrote Friday evening on Twitter. "By failing to act, Congress is complicit in Trump's latest attempt to solicit foreign interference to aid him in US elections. Do your constitutional duty and impeach the president."

Democrats' vocalization of a sense of helplessness was particularly acute at the end of an embarrassing week that underscored how the Trump administration has been able to run circles around their investigations.

Former Trump campaign manager Corey Lewandowski turned in a defiant performance in front of the House Judiciary Committee on Tuesday, dodging questions, talking over members and even promoting his own potential Senate bid and book sales.

Two days later, news broke that the administration was refusing to turn over the whistleblower complaint alleging that Trump compromised national security with some sort of "promise" to a foreign official. Although the inspector general of the intelligence community deemed the matter credible and of "urgent" concern, the administration blocked the complaint from being shared with Congress.

“As president, he just overwhelms us,” lamented Rep. Eric Swalwell, D-Calif., a former 2020 presidential candidate. “I mean, you’ve got kids in cages - we’re trying to deal with that. We’ve got the continued mass shootings, and he won’t help us with that. And then you’ve got the urgency of this [oversight]. So, I mean, it’s really just kind of, where do you prioritize your resources and your time?”