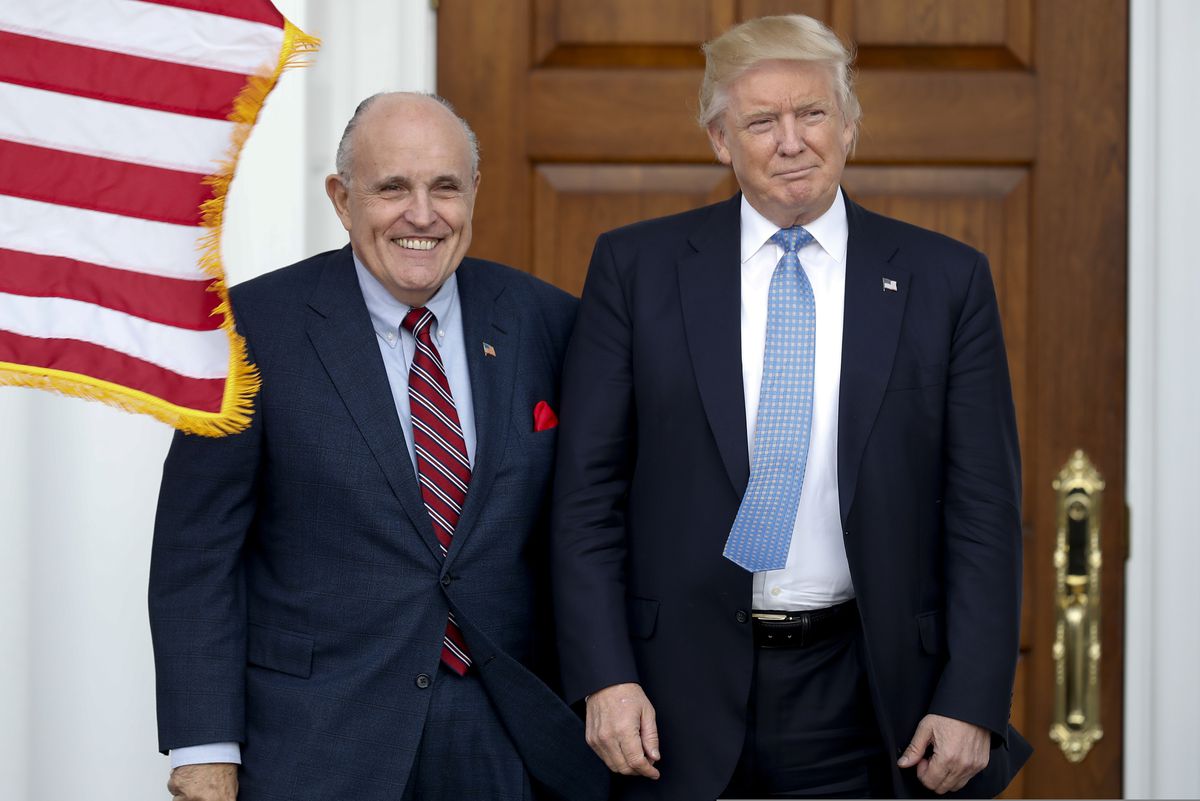 The sequence, which began early this year, involved the abrupt removal of the U.S. ambassador to Ukraine, the circumvention of senior officials on the National Security Council, and the suspension of hundreds of millions of dollars of aid administered by the Defense and State departments - all as key officials from these agencies struggled to piece together Giuliani's activities from news reports.

Several officials described tense meetings on Ukraine among national security officials at the White House leading up to the president's phone call on July 25, sessions that led some participants to fear that Trump and those close to him appeared prepared to use U.S. leverage with the new leader of Ukraine for Trump's political gain.

As those worries intensified, some senior officials worked behind the scenes to hold off a Trump meeting or call with Ukrainian President Volodymyr Zelensky out of concern that Trump would use the conversation to press Kiev for damaging information on Trump's potential rival in the 2020 race, former vice president Joe Biden, and Biden's son, Hunter.

"An awful lot of people were trying to keep a meeting from happening for the reason that it would not be focused on Ukraine-U.S. relations," one former official said, speaking on the condition of anonymity to discuss the sensitive matter.

White House officials disputed these accounts, saying that no such concerns were raised in National Security Council meetings and that Trump's focus was on urging Ukraine to root out corruption. A White House spokesman did not respond to a request for comment.

But Trump admitted this week that he had done some of what his own advisers feared, using the call to raise the issue of Biden with Zelensky. And the wave of consternation triggered by that call led someone in the U.S. intelligence community to submit an extraordinary whistleblower complaint, setting in motion a sequence of events that now includes the start of an impeachment inquiry in the House of Representatives.

Though the whistleblower report focuses on the Trump-Zelensky call, officials familiar with its contents said that it includes references to other developments tied to the president, including efforts by Giuliani to insert himself into U.S.-Ukrainian relations.

Trump announced Tuesday that he would release a transcript of his call, insisting that it would show there was "NO quid pro quo!" and would reveal a conversation that was "friendly and totally appropriate."

But even within Trump's party, few have gone so far as to say they would consider it appropriate for the president to solicit foreign help in an American election. And his political fate may hinge on how lawmakers and the public assess not only his intentions on the call, but also the actions of his subordinates in the events surrounding it.

U.S. officials described an atmosphere of intense pressure inside the NSC and other departments since the existence of the whistleblower complaint became known, with some officials facing suspicion that they had a hand either in the complaint or in relaying damaging information to the whistleblower, whose identity has not been revealed and who is entitled to legal protection.

One official - speaking, like others, on the condition of anonymity - described the climate as verging on "bloodletting."

Trump has fanned this dynamic with his own denunciations of the whistleblower and thinly veiled suggestions that the person should be outed. "Is he on our Country's side. Where does he come from," Trump tweeted this week.

Trump's closest advisers, including acting White House chief of staff Mick Mulvaney, who was ordered by Trump to suspend the aid to Ukraine, are also increasingly targets of internal finger-pointing. Mulvaney has agitated for foreign aid to be cut universally but has also stayed away from meetings with Giuliani and Trump, officials said. But the person who appears to have been more directly involved at nearly every stage of the entanglement with Ukraine is Giuliani.

Several officials traced their initial concerns about the path of U.S.-Ukrainian relations to news reports and interviews granted by Giuliani in which he began to espouse views and concerns that did not appear connected to U.S. priorities or policy.

The former New York mayor appears to have seen Zelensky, a political neophyte elected president of Ukraine in April and sworn in in May, as a potential ally on two political fronts: punishing those Giuliani suspected of playing a role in exposing the Ukraine-related corruption of former Trump campaign chairman Paul Manafort, and delivering political ammunition against Biden.

After the conclusion of the Mueller investigation, Giuliani turned his attention to Ukraine, officials said, and soon began pushing for personnel changes at the embassy while seeking meetings with Zelensky subordinates. He also had his own emissaries in Ukraine who were meeting with officials, setting up meetings for him and sending back information that he could circulate in the United States.

Yovanovitch, a longtime State Department Foreign Service officer, arrived in Ukraine as ambassador at the end of the Obama administration, more than two years after an uprising centered on Kiev's Independence Square ousted the Russian-leaning government.

Though she was widely respected in the national security community for her efforts to prod Ukraine to take on corruption, Giuliani targeted Yovanovitch with wild accusations including that she played a secret role in exposing Manafort and was part of a conspiracy orchestrated by the liberal financier George Soros.

"She should be part of the investigation as part of the collusion," Giuliani said in a recent interview with The Washington Post, adding that "she is now working for Soros." Yovanovitch is still employed by the State Department and is a fellow at Georgetown University. She declined to comment.

Giuliani also said the entire State Department was a problem, and officials familiar with his actions say he regularly briefed Trump on his Ukrainian endeavors. "The State Department is a bureaucracy that needs to change," he told The Post.

Many of Giuliani's charges were either recycled from, or subsequently echoed by, right-wing media outlets.

In late March, the president's son Donald Trump Jr. amplified this campaign with a tweet calling for the removal of "Obama's U.S. Ambassador."

Yovanovitch, who was to depart in July after a three-year assignment, was prematurely ordered back to Washington, a move that both baffled and unnerved senior officials at the State Department and the White House, officials said.

Within days of her ouster on May 9, Giuliani seemed determined to seize an unsanctioned diplomatic role for himself, announcing plans to travel to Ukraine to push for investigations that would "be very, very helpful to my client, and may turn out to be helpful to my government."

Giuliani canceled the trip amid an ensuing backlash over his purpose but later met with one of Zelensky's senior aides in Madrid and pressed the issue of Ukraine's helping against Biden.

In a May 19 interview on Fox News, Trump recited repeatedly disproved allegations that then-Vice President Joe Biden had coerced Ukraine to drop an investigation into the owner of an energy company, Burisma, for which Biden's son, Hunter was a board member.

The allegations were baseless. Though Hunter Biden had served on the Burisma board for five years - a questionable decision given his father's influential position - he was never accused of any wrongdoing by Ukrainian authorities. The probe had been shelved before any action by the vice president, and the elder Biden's efforts involved removing a prosecutor widely criticized by the West as failing to tackle corruption.

Nevertheless, Trump is alleged to have used his July 25 call with Zelensky to get Ukraine to revive this dormant inquiry and widen it to include possible wrongdoing by Biden.

In Washington, officials outside Trump's inner circle who were dismayed by Yovanovitch's ouster reacted with growing alarm and confusion over Giuliani's subsequent activities.

Then-national security adviser John Bolton was outraged by the outsourcing of a relationship with a country struggling to survive Russian aggression, officials said. But by then his standing with Trump was strained, and neither he nor his senior aides could get straight answers about Giuliani's agenda or authority, officials said. Bolton declined to comment.

"We had the same visibility as anybody else - watching Giuliani on television," a former senior official said. Officials at the U.S. Embassy in Kiev were similarly deprived of information, even as they faced questions from Ukrainians about whether Giuliani was a designated representative.

"The embassy didn't know what to do with the outreach," said Sen. Chris Murphy, D-Conn., who traveled to Ukraine this month.

The perception of a parallel, hidden agenda intensified in the summer as officials at the NSC, Pentagon and State Department began reacting to rumors that hundreds of millions of dollars of military and intelligence aid to Ukraine was being mysteriously impeded.

"There were never any orders given, any formal guidance from the White House to any of the agencies," said a U.S. official familiar with the matter. "And the NSC was scratching their heads: How is this possible?"

But even then, clear answers proved elusive. Officials were told that the money was being blocked by the Office of Management and Budget, without any accompanying explanation.

"It was bizarre," the official said.

A former official familiar with the meetings said participants began to file out raising troubling questions about what was driving the White House to withhold the aid as well as a meeting with Trump that had been all but promised to Zelensky.

Although the question of a linkage or leverage never came up in the formal NSC discussions, participants began to believe that Trump was "withholding the aid until [Ukraine] gave him something on Biden or Manafort."

It was during this stretch, in July, when some officials began to hesitate about the wisdom of proceeding with a Trump call with Zelensky. In part, there was a desire to hold off until after Ukraine's parliamentary elections. But, mindful of Giuliani's agitation and influence, some worried that even if he were coached before the call, Trump would not be able to resist pressing Zelensky for dirt on Biden.

On July 24, former special counsel Robert Mueller III testified before Congress on the outcome of the Russia investigation, a probe that had threatened Trump for much of his presidency and was focused on whether he had conspired with Moscow to influence the U.S. election.

The next day, Trump spoke with Zelensky on a call, and the vague misgivings that had risen over the preceding five months hardened into alarm. Among those who listened in on the call or were in position to see a transcript, the president's persistence with Zelensky on the corruption probe marked the crossing of a perilous threshold.

The Washington Post’s Greg Jaffe, Robert Costa and Julie Tate in Washington, and Michael Birnbaum and David L. Stern in Kiev, contributed to this report.