Trump denies that he pressured Ukraine’s Zelensky to investigate Biden 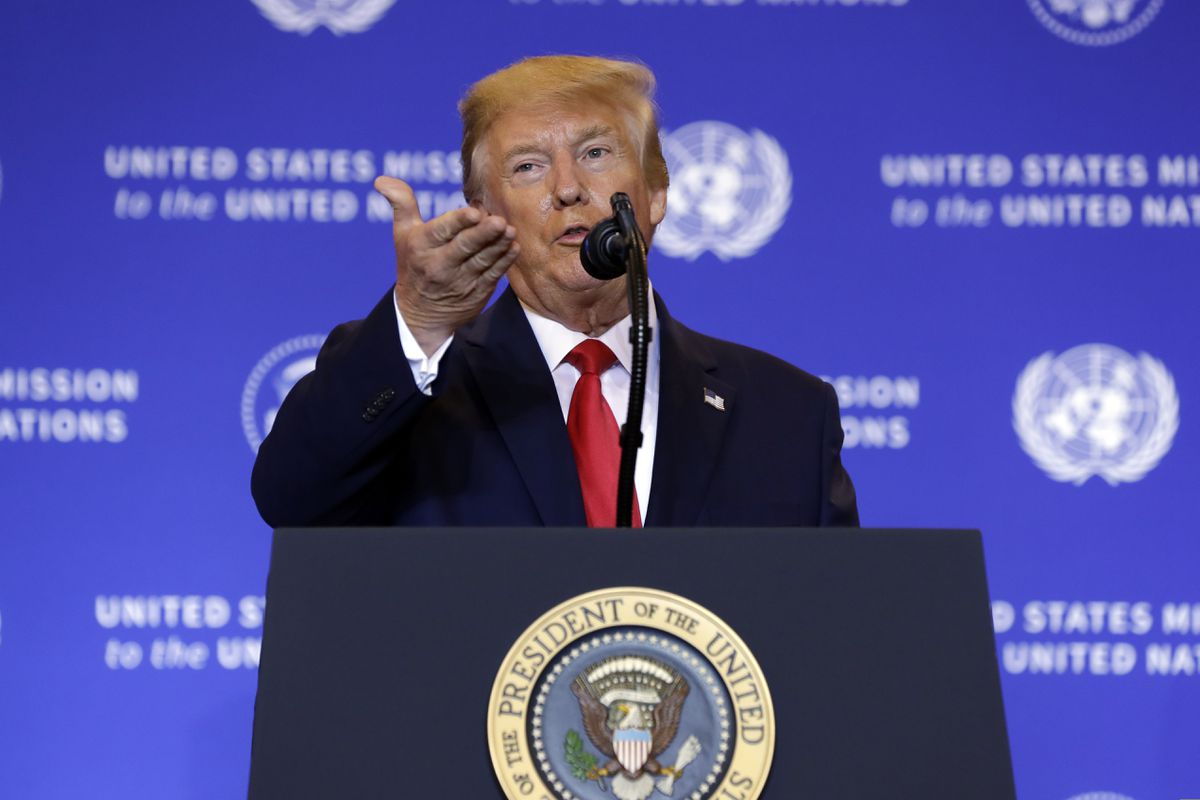 President Donald Trump on Wednesday denied that he pressured Ukrainian President Volodymyr Zelensky to investigate Democratic presidential candidate Joe Biden, after the White House released a rough transcript of the July call between the two that Democrats say confirms the need for an impeachment inquiry.

At the start of a bilateral meeting on the sidelines of the United Nations General Assembly in New York on Wednesday, Zelensky told reporters that Trump did not push him to investigate Biden.

At that point, Trump cut in. "In other words, no pressure," he said.

The exchange followed the release of a document that showed Trump offering the help of the U.S. attorney general to investigate Biden and promising Zelensky a White House meeting after he said he would conduct such an inquiry.

House Speaker Nancy Pelosi, D-Calif., said in a statement Wednesday that the rough transcript proves Trump "has tried to make lawlessness a virtue in America and now is exporting it abroad."

The July 25 call has been the subject of intense scrutiny since The Washington Post reported last week that a whistleblower had come forward with concerns about the matter.

Trump has acknowledged publicly that he asked Zelensky to investigate Biden's son, who served on the board of Burisma, a Ukrainian gas company that came under scrutiny by authorities there.

Pelosi said the notes of the call by the White House "confirms that the President engaged in behavior that undermines the integrity of our elections, the dignity of the office he holds and our national security."

She said she respects Trump's responsibility to engage with foreign leaders.

But, she said, "It is not part of his job to use taxpayer money to shake down other countries for the benefit of his campaign. Either the President does not know the weight of his words or he does not care about ethics or his constitutional responsibilities."

Pelosi also accused the Justice Department of "acting in a rogue fashion" and being "complicit in the President's lawlessness."

Later Wednesday, Acting Director of National Intelligence Joseph Maguire, who until now had blocked Congress from seeing the whistleblower complaint that first brought the phone call between Trump and Zelensky to light, will provide that complaint to Congress later in the day, according to California Rep. Devin Nunes, the top Republican on the House Intelligence Committee.

Lawmakers have demanded the whistleblower's complaint be made available to them, both before and after seeing the White House's readout of the call.

Schiff said Zelensky's statements in the rough transcript "reflect a Ukrainian president who was desperate for U.S. support." Trump, he said, was eager to leverage that situation.

He also took aim at Trump’s mentions of Attorney General William Barr in the call.

The fact that Trump would invoke the attorney general, Schiff said, sends a message to the Ukrainian president that "this is the United States government asking, and we plan to effectuate that through the Department of Justice."

"We are going to focus on this particular matter," Hoyer said, adding that it's "not hard to understand."

As they move forward with an impeachment inquiry, House Democrats have been in talks about how narrowly to focus on the Ukraine matter vs. material from an array of other investigations.

Holding up a copy of the rough transcript, Hoyer said, "Even that which is in this document is pretty damning. . . . These are very serious national security issues."

Hoyer added that there are no plans to cancel an upcoming two-week recess because it is important for members to have time to explain to constituents what happened in the Ukraine matter.

"The President, Donald Trump, clearly pressured the Ukrainian president to commence an investigation of the Biden family to dig up political dirt in order to bolster the president's electoral prospects in 2020," Jeffries said. "That is textbook abuse of power, and the transcripts have become Exhibit A in that regard."

The document shows that Trump urged Ukraine's leader to contact Barr about opening an inquiry tied to Biden.

"The President dragged the Attorney General into this mess. At a minimum, AG Barr must recuse himself until we get to the bottom of this matter," Nadler tweeted.

Shortly after the rough transcript was publicly released, Trump went on Twitter to call on Democrats to apologize.

"Will the Democrats apologize after seeing what was said on the call with the Ukrainian President?" he wrote. "They should, a perfect call - got them by surprise!"

Trump also tweeted a clip of a younger Pelosi speaking on the House floor about how unfairly Republicans were treating then-President Bill Clinton during his impeachment.

Shortly afterward, speaking to reporters in New York, he continued to insist he is the victim of "the single greatest witch hunt in American history."

"It's a disgraceful thing," Trump said. "The letter was a great letter, meaning the letter revealing the call."

He claimed the rough transcript showed he put "no pressure" on Zelensky.

While Democrats had suggested he had a “call from hell,” Trump said, it instead “turned out to be a nothing call.”