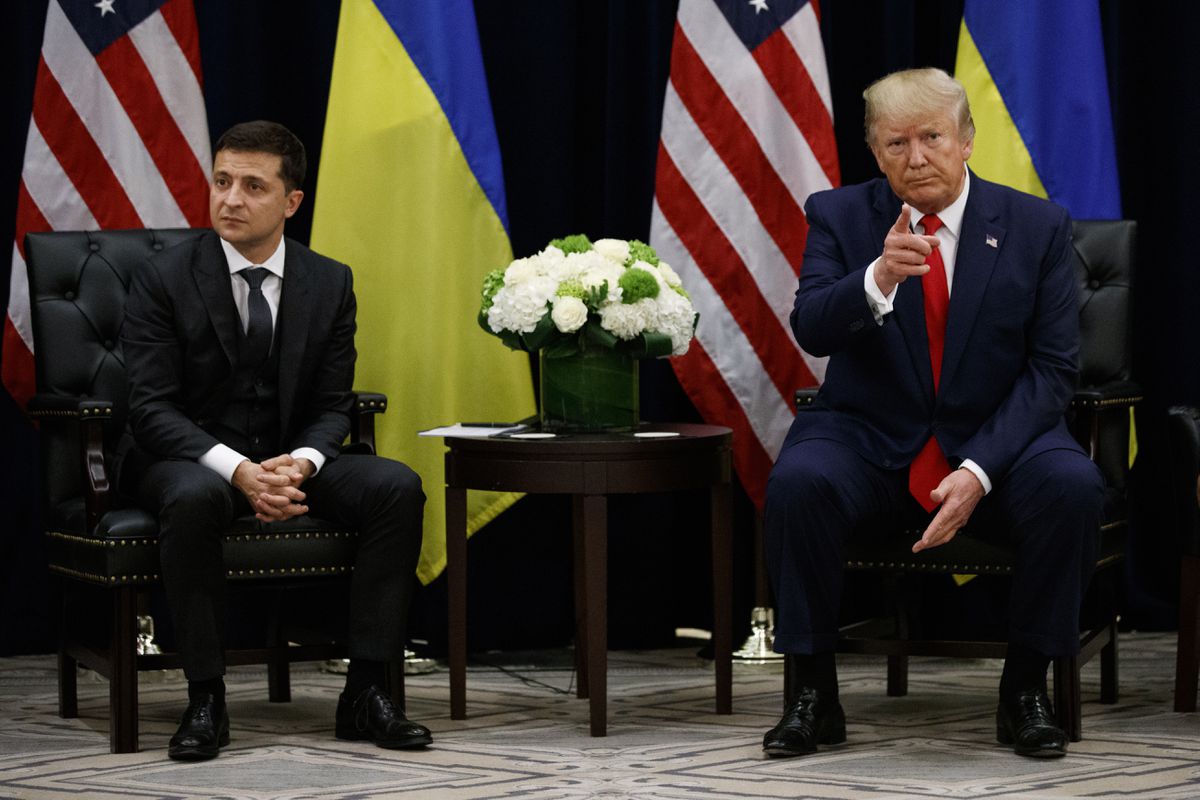 WASHINGTON - President Donald Trump repeatedly urged the Ukrainian president to investigate Joe Biden, one of his chief political rivals, and offered to enlist the U.S. attorney general in that effort while dangling the possibility of inviting the foreign leader to the White House, according to a rough transcript of the call released Wednesday.

The July 25 phone call between Trump and Ukrainian President Volodymyr Zelensky raised alarms among some intelligence officials, leading in August to a secret whistleblower complaint and a Justice Department referral to determine whether the president’s conduct amounted to a violation of a campaign finance law that bars foreign contributions to U.S. politicians.

The document touched off a wide spectrum of reactions on Capitol Hill, where Democrats accused Trump of violating his oath of office by soliciting political payback from a foreign leader, having only a day earlier announced they have launched a formal impeachment inquiry of the president. Republicans defended the president and lobbed counteraccusations at Biden.

Trump continued to insist he did nothing wrong, and Zelensky, seated beside him during an awkward joint appearance at the United Nations in New York, described their July phone call as "normal," saying, "I'm sorry but I don't want to be involved to democratic open elections of U.S.A."

The drumbeat of revelations about the Trump-Zelensky call is likely to continue this week. After the White House allowed some lawmakers Wednesday to review the whistleblower’s complaint, Democrats signaled they were increasingly convinced that the president’s behavior justified their drive for impeachment.

"He copped to asking a foreign power to help him in his election," Rep. Eric Swalwell, D-Calif., said. "That's impeachable."

The whistleblower complaint focuses largely on the July 25 call between Trump and Zelensky, which the whistleblower sees as evidence of Trump’s efforts to pressure the Ukrainian government to investigate his political opponents, according to a person who has read the complaint and spoke on the condition of anonymity to discuss its contents. But the complaint also broadly alleges an effort by Trump and his personal lawyer, Rudy Giuliani, to pressure Ukrainian officials over time, not just on the July 25 call, this person said. The whistleblower paints a picture, also using public news reports, to suggest that Giuliani pressured Ukrainian officials to further Trump’s interest in investigating his political opponents.

The complaint also alleges a pattern of obfuscation at the White House, in which officials moved the records of some of Trump's communications with foreign officials onto a separate computer network from where they are normally stored, this person said. The whistleblower alleges that is what officials did with Trump's July 25 call with Zelensky, an action that alarmed the intelligence community inspector general and prompted him to request that the White House retain records of the Zelensky call, the person who read the complaint said.

In keeping with White House practice, the memo on the phone call is not a verbatim account. A cautionary note on the document warns that the text reflects the notes and memories of officials in the Situation Room and that a number of factors, including accents and translations, "can affect the accuracy of the record."

The phone call began with Trump congratulating Zelensky on his election victory, and Zelensky effusively praised Trump in return, according to the White House memo.

Trump replied: "I would like you to do us a favor because our country has been through a lot and Ukraine knows a lot about it." He then asked for help in finding the Democratic National Committee computer server that U.S. officials say was hacked by Russian intelligence in the run-up to the 2016 election. Trump also called special counsel Robert Mueller III "incompetent" for his performance a day earlier while testifying to Congress about his investigation into Russian interference in the U.S. presidential election.

"The server, they say Ukraine has it," Trump says according to the memo. "I would like to have the attorney general call you or your people, and I would like you to get to the bottom of it."

"I would like to have the Attorney General call you or your people and I would like you to get to the bottom of it," Trump said, according to the White House memo which was declassified Tuesday.

As the half-hour conversation went on, Trump's requests of Zelensky shifted to a different topic: investigating the Bidens.

Zelensky replied, according to the White House memo, that "my candidate" for the prosecutor job "will look into the situation." He also noted he stayed at Trump Tower on his last visit to New York City, Trump invites him for a White House meeting - something the Ukrainian leader had wanted.

Since Zelensky's election in April, Ukraine had urgently sought a meeting for the new president at the White House, a sit-down to demonstrate Washington's backing as it fights a long-simmering war with Russian-backed separatists. U.S. officials and members of the Trump administration wanted the meeting to go ahead, but Trump personally rejected efforts to set it up, The Washington Post reported last week.

The White House has not yet set a date for an Oval Office meeting.

At a news conference later in New York, Trump savaged Schiff, Democrats, and the media.

"It's all a hoax, folks, it's all a big hoax," the president said. "When you look at the information, it's a joke. Impeachment for that? When you have a wonderful meeting or a wonderful phone conversation."

Trump denied any wrongdoing and suggested the Biden family deserved to be investigated for possible corruption, making unsubstantiated allegations they've taken millions of dollars out of China. He insisted his hands were clean.

"I didn't do it, I didn't threaten anyone," the president said. "No push, no pressure, no nothing."

Not all Republicans agreed. Sen. Mitt Romney, R-Utah, said the matter "remains troubling in the extreme. It's deeply troubling."

On Wednesday afternoon, select lawmakers were allowed to read classified versions of the whistleblower's complaint. Officials are preparing to declassify a version of it and make it public later this week, according to people familiar with the discussions.

White House officials said the call memo does not show the president seeking any quid pro quo to kneecap a political rival because the president did not tie his requests to aid from the U.S. government.

While political fights surrounding the phone call have raged for the last 10 days, government officials at a host of agencies have been privately dealing with the matter for more than a month.

Their primary source for reaching that conclusion was the memo, according to the officials. While prosecutors did gather information about how the White House memorializes presidential calls with foreign heads of state, they did not interview other White House officials because they had not formally opened an investigation. Justice Department officials still do not know who the whistleblower is, officials said Wednesday.

In a statement, Justice Department spokeswoman Kerri Kupec said the Justice Department's criminal division "reviewed the official record of the call and determined, based on the facts and applicable law, that there was no campaign finance violation and that no further action was warranted."

She noted, though, that U.S. Attorney John Durham, who is exploring the origins of the FBI's probe into possible coordination between the Trump campaign and Russia, was "exploring the extent to which a number of countries, including Ukraine, played a role in the counterintelligence investigation directed at the Trump campaign during the 2016 election."

Trump ordered the memo released following days of mounting pressure from Congress, and a new surge of Democrats who favor impeachment. The president's decision followed reports that he pressed Zelensky to investigate Biden, considered a leading candidate for the Democratic nomination to challenge Trump in 2020, and his son, Hunter Biden.

White House officials said there were discussions for several days about releasing details of the call, with Secretary of State Mike Pompeo objecting to its release on the grounds that doing so would make it harder for Trump to speak frankly with foreign leaders, and senior Justice Department officials urging it be made public to quell the growing debate over Trump's conduct.

Trump has acknowledged publicly that he asked Zelensky to investigate Biden's son, who served on the board of a Burisma, a Ukrainian gas company that came under scrutiny by authorities there. Hunter Biden was not accused of any wrongdoing in the investigation. As vice president, Joe Biden pressured Ukraine to fire its top prosecutor, who Biden and other Western officials said was not sufficiently pursuing corruption cases. At the time, the Ukrainians' investigation was dormant, according to former Ukrainian and U.S. officials.

Justice Department officials released their legal reasoning for doing so Wednesday, asserting that because the matter did not concern the "funding, administration, or operation of an intelligence community" matter - but instead was an allegation of possible criminal conduct by the commander in chief - it should be more properly handled as a criminal referral.

The Justice Department's Office of Legal Counsel also noted the inspector general had found "some indicia of an arguable political bias on the part of the Complainant in favor of a rival political candidate."

Lawmakers have raised concerns about Trump's directive to freeze nearly $400 million in military assistance for Ukraine in the days leading up the phone call with Zelensky.

On Tuesday, House Speaker Nancy Pelosi, D-Calif., announced she was launching a formal impeachment inquiry, saying "the actions of the Trump presidency have revealed the dishonorable fact of the president's betrayal of his oath of office, betrayal of our national security and betrayal of the integrity of our elections."

[Analysis: Pelosi’s impeachment decision sets up an epic constitutional battle - and a personal one]

The rapidly-escalating confrontation between the White House and Congress comes just months after Trump freed himself from the cloud of the investigation led by Mueller. Now, he is back in the crosshairs of a resurgent impeachment effort over a fresh allegation of election season misconduct.

One senior White House official said that while the call summary was “not entirely helpful for our side,” it also showed there was not an explicit quid pro quo - which could be a crime. “Everyone is going to see in that transcript what they want to see,” this person said, adding there were robust discussions about whether it would help or hurt Trump.