Analysis: Pelosi’s impeachment decision sets up an epic constitutional battle - and a personal one 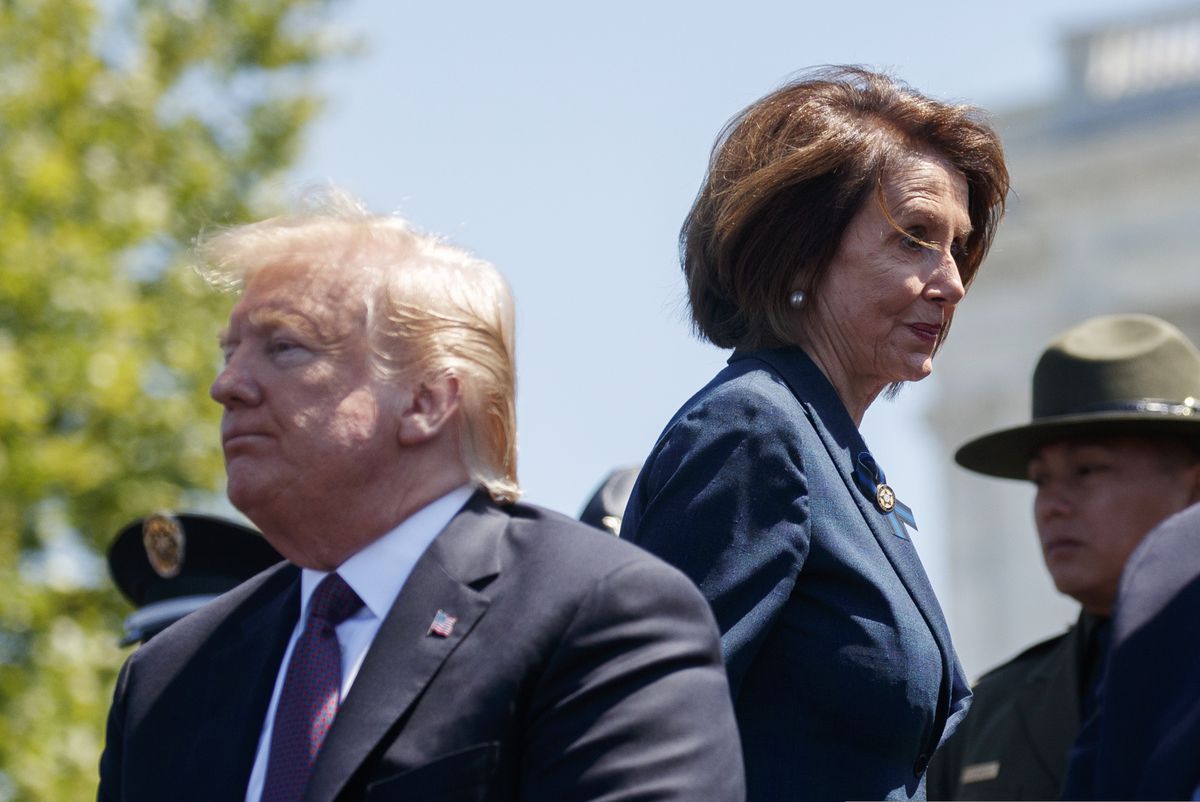 WASHINGTON - If Tuesday was House Speaker Nancy Pelosi’s day, Wednesday was President Donald Trump’s. Depending on where you sit, it was either a very bad day or a not-so-bad day. As is often the case with the president, it was some of both.

Wednesday began with the White House release of the rough transcript of Trump’s July 25 phone call with Ukrainian President Volodymyr Zelensky, the contents of which showed the president pressing Zelensky to open an investigation into former vice president Joe Biden, who could be his challenger in next year’s election, and Biden’s son Hunter. Trump told Zelensky in that call that he was asking for “a favor.”

The day ended with a defiant - and weary - president twice facing the press, arguing that what he had done in the phone call with Zelensky was in fact “perfect,” that he had done nothing wrong, that there was no quid pro quo and that in fact it was others - Democrats whom he accused of doing what he has now been accused of having done, and the news media, which he said was delivering fake news about the Ukraine situation.

Back to back, the Pelosi announcement on Tuesday and the unfolding events of Wednesday neatly encapsulated what is now before the country. The speaker, once reluctant to start a formal impeachment inquiry, has now done so, a decision that dramatically raised the stakes not just for the president but for her own party.

Trump responded as he always has when attacked, with fury and with countercharges that are often designed to obfuscate and demean his accusers. He does that because such tactics have often been successful for him, and he no doubt believes that, once again, he will survive this latest and perhaps the most significant challenge to his power and position.

Pelosi and Trump have circled one another from the moment she retook the gavel after a surge of anti-Trump voters knocked House Republicans out of the majority in the 2018 midterms. The president learned almost immediately that the speaker was someone with a keen sense of strategy and the tenacity to go with it. He lost their first battle, over a government shutdown, and came out of it with a clearer understanding that she was no ordinary adversary.

That shutdown battle was child's play compared with what Pelosi's decision has touched off. After months of hesitation and after numerous House committees were stymied in their efforts to investigate the president, Pelosi took a step that barely a week ago seemed nearly unthinkable. That of course was before anyone knew much at all about the president's effort to force Ukraine to investigate Biden and his son.

Trump and his allies claimed the rough transcript was exculpatory. Others read it far differently, calling it an unprecedented case of a president repeatedly asking a foreign leader for help to dig dirt on political rivals and offering the assistance of Attorney General William Barr and Trump's personal lawyer, Rudy Giuliani, who for months has pursued and pushed for the very same investigations.

Trump's and Giuliani's descriptions of what Biden had done as vice president do not square with what actually happened, but as the Democrats have begun to circle, Trump has done everything he can to make this all about his possible challenger instead of himself.

The impeachment inquiry is both an epic battle between the speaker and the president and, more fundamentally, a constitutional clash that will help define the limits on presidential power, and the balance of power between the executive and legislative branches.

The outcome will shape, perhaps decisively, the 2020 campaign. Trump will either be out of office by January 2021 or he will have emerged victorious, reelected to a second term in large part because of what would then, inevitably, be interpreted as an enormous gamble by the speaker and the Democrats that went terribly wrong. The past two days have shown that there is no turning back.

The confrontation between the speaker and the president is an irresistible part of the story, in part because it is so personal. That might not be Pelosi's ideal, as she has cast this in constitutional rather than personal terms. But it is inevitable, given the history between the two, and Trump showed again on Wednesday that he will do everything in his power to make this as personal as possible - and all about himself as a victim of what he immediately branded as another Democratic witch hunt.

This is much more than a personal struggle, however, and one reason that Pelosi moved as she did on Tuesday was to protect and defend against a president who has so stretched the limits of his office that there seemed no other way to check him than to move toward possible impeachment. Seen from the speaker's office, it was a necessary, if not a preferred, step, given the political risks; a decision based more on the prerogatives of checks and balances than on assumed political gain.

Presidents have long usurped power from Congress. There has been a steady accretion of power by the executive, often as a result of a supine legislative branch. But perhaps not since the impeachment of Andrew Johnson in 1868 has a Congress been so constitutionally and repeatedly aggrieved by the actions of a sitting president.

It took a long period of conflict between Johnson and the Radical Republicans in Congress, during which Johnson repeatedly flaunted his powers, before Congress finally snapped and tried to stop him by impeaching him. At the heart of the conflict were issues of race and of what kind of nation would emerge after the Civil War. Though there were various articles of impeachment drawn up, the strongest encompassed the issue of abuse of power by Johnson.

That is where House Democrats are now heading, to counter a president who they believe has repeatedly abused his powers, first during the investigation by special counsel Robert Mueller III and now by asking a foreign government to investigate a political rival. It could be a messy road ahead.

Time is now a factor. The House committees have spent nine months mostly spinning their wheels, locked down in legal battles with the White House. Now the Democratic leaders appear more tightly focused on Trump, Ukraine and Biden. They have the power to draw up articles of impeachment and perhaps the votes to impeach.

Then it would go to the Senate, where it currently seems highly unlikely that the president's accusers could obtain the necessary two-thirds majority for a conviction. Trump would claim that, again, the Democrats swung and missed.

In the first impeachment trial, Andrew Johnson was acquitted, but as historian Brenda Wineapple describes in her recent and timely book, "The Impeachers: The Trial of Andrew Johnson and the Dream of a Nation," those who pushed the impeachment made their point about what kind of country would emerge after the Civil War by standing against him.

Johnson survived the trial in the Senate, but he was soon out of office as a result of the 1868 election. He was not even on a national ticket in that election. That fate doesn't seem to await Trump, despite several challengers for the GOP nomination, as the machinery of the Republican Party is working in his favor. The question is whether he will emerge from the coming impeachment proceeding weakened or strengthened by having survived.

This clash has been coming almost from the start of Trump’s presidency. Constitutional and institutional principles are at stake, but so too is the raw exercise of political power. Pelosi has drawn her line in the sand. Trump has responded with all the vigor he can muster. The entire country will live with the consequences.