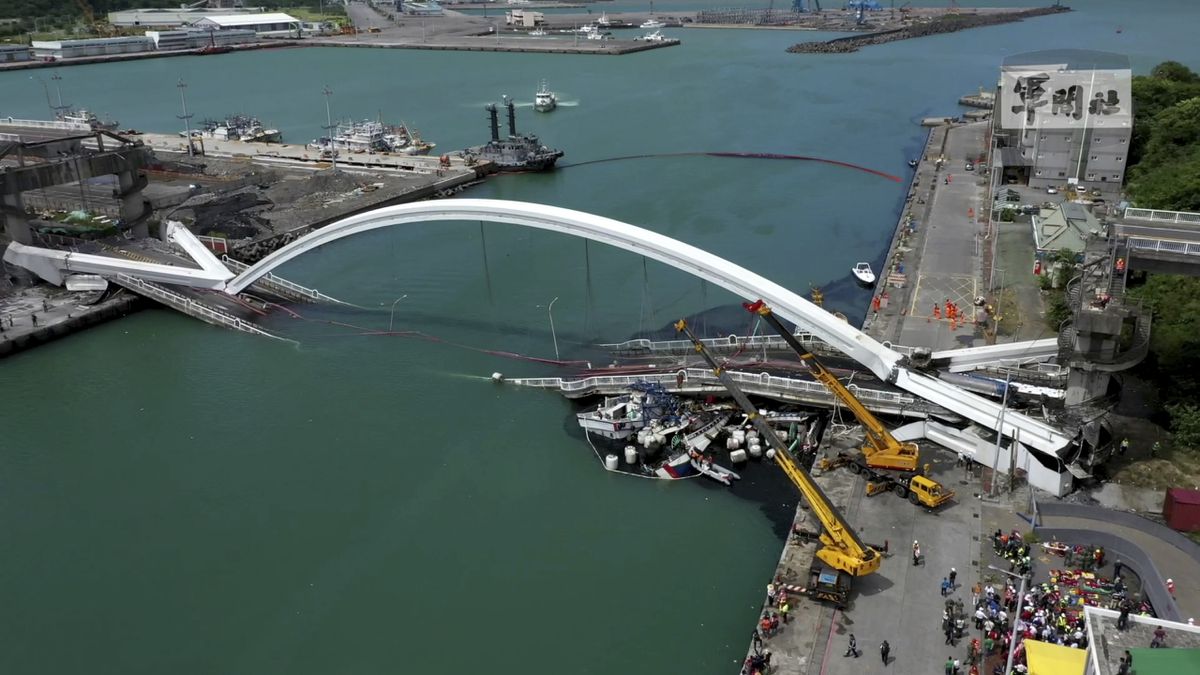 TAIPEI, Taiwan — A towering arch bridge over a bay in eastern Taiwan collapsed Tuesday, sending a burning oil tanker truck falling onto boats in the water below. An air force helicopter, fishing vessels and more than 60 military personnel including divers were searching for possible victims.

Six people, all foreigners, were missing and believed trapped on one of the fishing boats, the National Fire Agency said. Interior Minister Hsu Kuo-yung told reporters that five people were feared to have been on the bridge when it collapsed. Ten people were sent to hospitals, six of them with serious injuries.

The 460-foot bridge collapsed about 9:30 a.m. in Nanfangao, a tiny but often-crowded Pacific coast fishing village.

The weather at the time was sunny, but the collapse occurred hours after a typhoon swept by the island. Disaster relief officials would not say if the storm had weakened the bridge or give other details on the cause. Government-run Central News Agency said a bridge pier may have collapsed.

Taiwan President Tsai Ing-wen said she hoped all government departments would do everything possible to save people and "keep the number of deaths and injuries as low as possible," CNA reported.

National Fire Agency spokesperson Su Hong-wei said the oil tanker truck’s fall smashed three fishing boats. It also set off a fire on the truck, but it did not spread beyond the vehicle.

Rescue workers have removed one of the boats from under the collapsed bridge and are still working on the two others, the agency said in a statement Tuesday evening.

Of the 10 people hospitalized, six are Filipinos and three are Indonesians, the agency said. People from both countries regularly work on fishing boats registered in Taiwan, where pay is better than in their home countries.

The center of Typhoon Mitag passed east of Taiwan on Monday night and early Tuesday, but the outer winds gusting up to 85 mph affected the island before the storm moved to the northeast. The storm injured 12 people, felled trees, damaged vehicles and caused power outages around the island.

Nanfangao Bridge is a tourist attraction in Yilan. It was opened in 1998 and was built to replace a lower bridge that prevented large fishing vessels from passing underneath.

According to the company that designed the nearly 60-foot-high bridge, MAA Consultants, it’s the only single-span arch bridge in Taiwan supported by cables and the second single arch-cable steel bridge in the world.

Video footage on Twitter showed a large truck almost getting across the bridge and then tumbling backward as the bridge collapsed into the water.