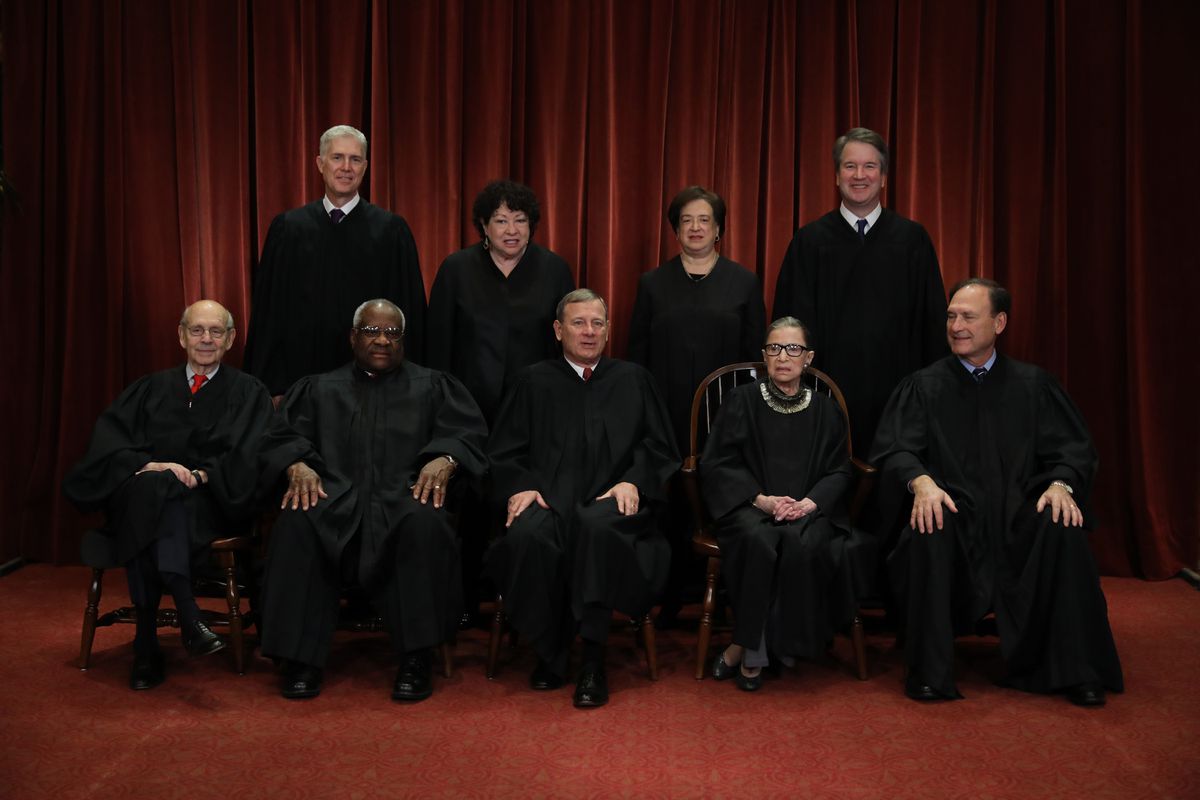 The justices will decide whether President Trump may revoke the Obama-era protections for more than 700,000 young immigrants, known as the Dreamers, who were brought to country illegally as children. And they will rule on whether the Civil Rights Act of 1964 — which forbids job discrimination "because of sex" — protects gay, lesbian, transgender and queer employees from being fired.

Compared to the relative calm of last year, this term's lineup of cases will almost surely spark more ideological splits, predicted Irv Gornstein, director of the Supreme Court Institute at Georgetown Law School. "We will likely see a court moving further and faster in a rightward direction," he said. "The docket almost guarantees it."

But the wild card again may be Chief Justice John G. Roberts Jr., who often strives to show that the high court, unlike the rest of official Washington, is not divided along political lines.

"When you live in a politically polarized environment, people tend to see everything in those terms," Roberts said last month at an appearance in New York City. "That is not how we at the court function."

In late June, Roberts spoke for a 5-4 conservative majority to reject legal challenges to partisan gerrymandering and to uphold a Republican-drawn map in North Carolina that allowed the GOP to keep control of 10 of the state's 13 congressional districts.

But the chief justice switched sides to join the four liberals in blocking the Trump administration's plan to add a citizenship question to the 2020 census. The pair of decisions handed down together ended the last term on a bipartisan note.

The fall's major cases on LGBTQ rights and the Dreamers are likely to divide the justices along familiar lines.

Few argue that when Congress adopted the historic Civil Rights Act in 1964, its aim was to protect gays, lesbians, transgender and queer employees. But Title VII of the law says employers may not fire someone "because of ... race, color, religion, sex or national origin."

LGBTQ-rights advocates point to those words and invoke an unlikely source for support: the late Justice Antonin Scalia. The conservative icon had insisted judges should decide cases based on the words of the law, not the intentions of the legislators. In one such example, he wrote a 1998 opinion upholding a sexual harassment claim filed by a male worker on an offshore oil rig who said he was harassed in the shower by other men.

Relying on Scalia's approach, U.S. appeals courts in New York, Chicago and Cincinnati ruled recently that job discrimination based on an employee's sexual orientation or gender identity is illegal discrimination "because of sex" under the federal civil rights act.

But the U.S. appeals court in Atlanta tossed out a similar discrimination claim filed by Gerald Bostock, a child welfare coordinator for Clayton County, Ga., who said he was fired shortly after he joined an LGBTQ-friendly softball league.

On Tuesday, the court will hear arguments in Bostock vs. Clayton County, along with a suit brought by a transgender employee who was fired from her job at a funeral home in Detroit.

Trump administration lawyers will urge the court to rule for the employers. "The ordinary meaning of 'sex' is biologically male or female," they say, and it does not include sexual orientation or gender identity.

A broad coalition of liberal groups support the fired employees. "The principle behind the civil rights law is that employees should be judged on their merits, not on their identity or the identity of their spouse or their softball team," said Sunu P. Chandy, legal director for the National Women's Law Center.

California and 21 other states have laws that forbid discrimination based on sexual orientation, but Congress has not added such explicit protection to federal law. If the high court rules against the employees, "it would be announcing to employers in half the country that it is perfectly legal to fire LGBTQ employees," Chandy said.

On Nov. 12, the court will hear the case of the Dreamers vs. President Trump. Shortly after Trump took office, his administration said it would be reverse President Obama's order that granted relief from deportation and allowed work permits to be issued to 700,000 young immigrants who arrived as children.

However, Trump's advisors did so by claiming that Obama's order, known as Deferred Action for Childhood Arrivals (DACA), was unconstitutional and illegal. A judge in San Francisco and the U.S. 9th Circuit Court of Appeals blocked the reversal on procedural grounds. Those judges said Obama's order was entirely legal, and therefore, cannot be rescinded based on a false claim.

After standing aside for nearly a year, the justices agreed to hear Trump's appeal in the case of U.S. Department of Homeland Security vs. Regents of the University of California along with cases from New York and Washington, D.C. Defenders of the Dreamers need to draw at least one conservative to their side, and they enlisted former Solicitor Gen. Ted Olson, a Republican, to argue their case.

Two recent rulings on related issues point in opposite directions. In June 2018, the court's conservatives upheld Trump's so-called travel ban by a 5-4 vote on the grounds that the president has broad power over immigration. But in June of this year, Roberts spoke for a 5-4 liberal majority to block the citizenship question on the grounds that Trump's advisors gave a "contrived" and phony reason for proposing the change.

On abortion, the court is poised to rule this term on regulation of doctors who perform abortions — but not on an abortion ban. In February, the court temporarily blocked Louisiana from enforcing a new law that would require every physician who performs abortions to have admitting privileges at a nearby hospital. Three years ago, the high court by a 5-3 vote struck down an identical law in Texas on the grounds that it would shut down most of the state's clinics. Justice Anthony M. Kennedy, now retired, was in the majority then.

Last year, a federal appeals court in New Orleans upheld the Louisiana law, even though it was expected to force all but one clinic to close there. On Friday, the justices said they would hear the case of June Medical Services vs. Gee, and the election-year ruling will signal whether the court is ready to uphold much stricter regulation of abortion providers.

The year ahead may also see rulings on several claims of religious liberty. In a Montana case, the justices will decide whether states must give grants to students attending church schools if they give grants to other private schools (Espinoza vs. Montana).

Two years ago, Roberts called it discrimination that is "odious to our Constitution" when Missouri refused to give the Trinity Lutheran Church a grant to repair its school playground. Now that precedent is cited as the basis for giving public funds to church schools.

The justices are also weighing religious-rights appeals from Catholic Social Services in Philadelphia, which says it was removed from the city's foster care system because it refused to place children with same-sex couples, and from a Christian florist in Washington state who was charged with violating the state's civil rights law for refusing to provide flowers for a same-sex wedding.

“This could be one of the most consequential terms for religious freedom in a very long time,” said Luke Goodrich, a lawyer for Becket Fund on Religious Liberty.