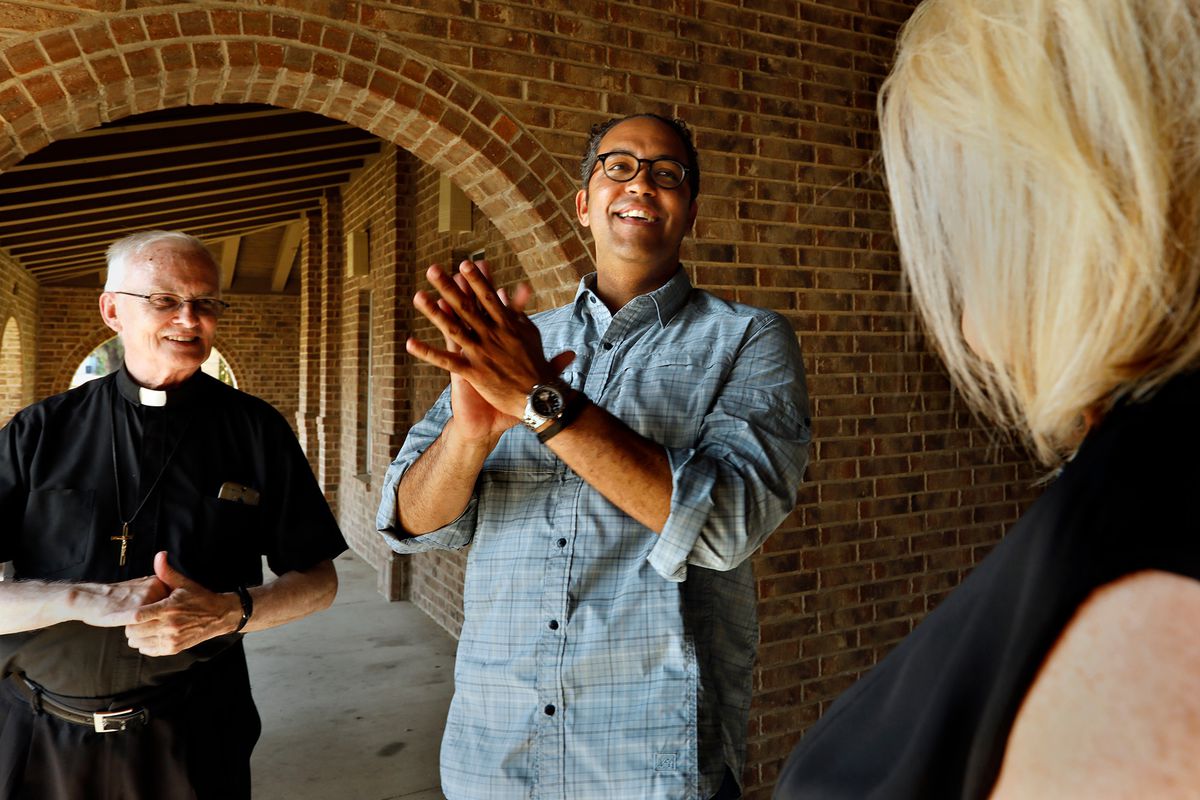 Republican Rep. Will Hurd of Texas makes a visit to Our Lady of Refuge Church in Eagle Pass, Texas on June 3, 2019. Hurd represents a district with more than 800 miles of U.S.-Mexico border. The lone black Republican in the House, who's won a 70% Latino district three times, should be the future of the GOP. Instead, in early August, the rare, if reluctant, Republican Trump critic announced he would not seek reelection. Hurd represents Texas's 23rd, which stretches from San Antonio, where he was born and raised, to the state's westernmost corner in El Paso. The district is bigger than some states and overwhelmingly Latino, and thus, Democratic. "A bellwether," he says. "Look, Texas is purple. There's no doubt about that." (Carolyn Cole/Los Angeles Times/TNS)

Republican Rep. Will Hurd of Texas makes a visit to Our Lady of Refuge Church in Eagle Pass, Texas on June 3, 2019. Hurd represents a district with more than 800 miles of U.S.-Mexico border. The lone black Republican in the House, who's won a 70% Latino district three times, should be the future of the GOP. Instead, in early August, the rare, if reluctant, Republican Trump critic announced he would not seek reelection. Hurd represents Texas's 23rd, which stretches from San Antonio, where he was born and raised, to the state's westernmost corner in El Paso. The district is bigger than some states and overwhelmingly Latino, and thus, Democratic. "A bellwether," he says. "Look, Texas is purple. There's no doubt about that." (Carolyn Cole/Los Angeles Times/TNS)

EAGLE PASS, Texas — On a two-lane highway between Del Rio, Texas, and Eagle Pass, Republican Rep. Will Hurd shifted in the passenger seat of a small rental car. He’d folded his long frame into the tight space for the hour’s drive through his massive district, which stretches along more than 800 miles of the U.S.-Mexico border. The summer heat blurred the landscape outside.

Ever since his time as an undercover officer in the CIA, where he learned how to maintain control at high speeds, Hurd said, he prefers being in the driver's seat.

A few months later and 1,700 miles away in Washington, the impeachment inquiry into President Donald Trump is hurtling forward with House Democrats behind the wheel. That leaves Hurd with a difficult decision: Put up roadblocks, or try to navigate?

Hurd, the lone black Republican in the House, is the rare GOP lawmaker who's been willing to criticize Trump, both over his "me first" foreign policy and his harsh rhetoric toward immigrants and minorities. In August, Hurd announced that he would not run for another term, giving him even more latitude.

Now, amid the biggest drama of his congressional career, Hurd may not be in control, but his perch on the Intelligence Committee, which is leading the investigation of Trump's actions toward Ukraine, and his reputation for going his own way, make him one of the most keenly watched people in the House.

How he handles the impeachment battle could shape public perception of whether the inquiry is a purely partisan exercise or an appropriate check on presidential power.

Under Trump, national-security-minded Republicans and those who believed the party needed to expand its support among nonwhite voters — Hurd fits both descriptions — have increasingly contorted themselves to justify policies they once vocally opposed. Impeachment may mean a final choice on whether to accept Trump's dominance of their party.

Hurd was among the first Republicans to call on the Trump administration to release the whistleblower complaint that has brought the impeachment debate to a boil. Last month, after questioning acting Director of National Intelligence Joseph Maguire, Hurd stopped short of openly supporting the impeachment inquiry, but called for further investigation.

Last week, as evidence mounted that Trump had held up aid to Ukraine in order to pressure that country's government into investigating Joe Biden's family, he ratcheted up his concerns.

"I think some of these things are indeed damning," he said Friday on CNN after Intelligence Committee Chairman Adam B. Schiff, D-Calif., released copies of text messages that had been exchanged among U.S. diplomats about the pressure on Ukraine. "However, I want to make sure we get through this entire investigation before coming to some kind of conclusion.

"I think this is serious stuff; these are serious matters," he said. "This has long-term implications on our foreign policy."

Amid rapid demographic shifts across the country, and particularly in Texas, many viewed Hurd, who'd won a 70% Latino district three times, as the potential leader for the next generation of the GOP. Instead, in August, he joined the list of what are now six Republicans from the state's congressional delegation who have announced they're leaving Congress. Hurd still says he will support Trump as the GOP's nominee in 2020, but he's considering a presidential run himself in 2024.

With a little more than a year left in Congress, Hurd says he’s going to fight to keep national security from being subsumed by politics. But as the president and his allies seek to discredit the whisteblower, reportedly a CIA analyst, the congressman could be on a collision course with the White House.

In his announcement that he would not run again, Hurd alluded to rhetoric coming from the White House against immigrants and minorities, which he has argued hurts the GOP's future prospects.

"Every American should feel they have a home in our party," he said. "Two centuries ago, I would have been counted as three-fifths of a person."

Two days later, on Aug. 3, a man drove hundreds of miles to El Paso, a border city of some 680,000 people, and opened fire at a Walmart, killing 22. The shooter had posted a xenophobic manifesto online, according to authorities. Its repeated warnings about an immigrant "invasion" echoed language Trump has often used. Police say the shooter told them he targeted Mexicans, and federal authorities labeled the attack domestic terrorism.

Hurd said his first thoughts were with the victims.

"You think about the family members that got a call when they woke up that morning that they had a loved one die," he said. Then he turned to the needs of local and federal law enforcement.

With the advent of social media, the FBI gets so many reports of troubling content it can't vet them all, he said. This nexus of national security and technology is where he says he's headed next.

"White nationalism is something that needs to be addressed and dealt with," he said. Asked how Trump's rhetoric has contributed, he avoids a direct answer: "I think everybody needs to pay attention to the words that we use — the president included."

Still, Hurd bristles at the suggestion that disagreements with Trump led to his decision to retire. "I have not felt that way."

In a late June visit to the border, Hurd and Val Verde County Sheriff Joe Frank Martinez, a Democrat, spoke to Border Patrol agents as a Haitian family huddled in the shade cast by the bars of the border fence.

The family had crossed the Rio Grande and sought to claim asylum, and already had waited three hours.

Having served in local law enforcement for three decades, Martinez, with whom Hurd consults several times a week, said that border politics doesn't cut neatly down the partisan aisle.

Neither does the congressman. Applying the same national security lens to the border as he has tried to use for impeachment, Hurd frustrates attempts at neat political categorization.

Amid a surge this year in the numbers of migrants arriving at the southern U.S. border, with levels not seen for more than a decade, Hurd's visit had the feel of a disaster tour after a hurricane.

First, an overcrowded Customs and Border Protection migrant processing center in Del Rio. Then a volunteer-run charity where Border Patrol agents dropped off migrants with little warning. A quick lunch across the border in Piedras Negras, Mexico, with the mayor of Eagle Pass, before navigating the Rio Grande with a Border Patrol river unit. Last stop, a visit to a Lutheran church sheltering recently arrived migrants before they traveled onward.

This area of south-central Texas had recently seen thousands of migrants arrive from more than 140 countries as far away as the Democratic Republic of Congo.

"Now you see people that are coming from other parts of the world, because they recognize that you can take advantage of the current system," Hurd said. "You'll continue to see that escalation."

Like the president, Hurd believes that many asylum seekers are exploiting U.S. immigration law and that authorities should be able to deport migrants more quickly. But he's also critical of Trump's response, including threats to slash Central American aid, attempts to extend the detention of immigrant children and an obsession with a border wall when technology would be less expensive and more effective.

Hurd sees the current immigration debate, instead, as a national security challenge that should be addressed by leveraging U.S. intelligence.

"The human smugglers have improved the infrastructure needed to move people to our southern border," he said. "What are we doing against that infrastructure? Nothing."

Back in Texas, Hurd seems equally comfortable with Democrats and Republicans, law enforcement and civilians. As he raced back from lunch in Piedras Negras, he joked with officers on the international bridge, "I haven't had good food all week; I've been in D.C."

"I tell all my friends all the time that I've gotten more surveillance as a member of Congress than I did as an undercover officer in the CIA," Hurd told Maguire, the acting director of national intelligence, during Maguire's recent testimony. "I think you've gotten more arrows shot at you since you've been DNI than you did in your almost four decades on the battlefield."

After the collegial opening, Hurd then asked what he called an "off-topic" question: "What do you see are our greatest challenges and threats in this country?"

Maguire answered that the biggest threat was not "from a kinetic strike with Russia or China or Iran or North Korea," but foreign powers "right now" trying to undermine U.S. elections.

Democrats are eager to frame the impeachment inquiry as a defense of U.S. democracy and the Constitution against Trump. Hurd hasn't tipped his hand on whether he'll join.

But in announcing he was leaving Congress, he noted he'd taken the same oath to defend the Constitution on his first day as a CIA officer and as a lawmaker.

“This oath,” Hurd said, “doesn’t have a statute of limitations.”