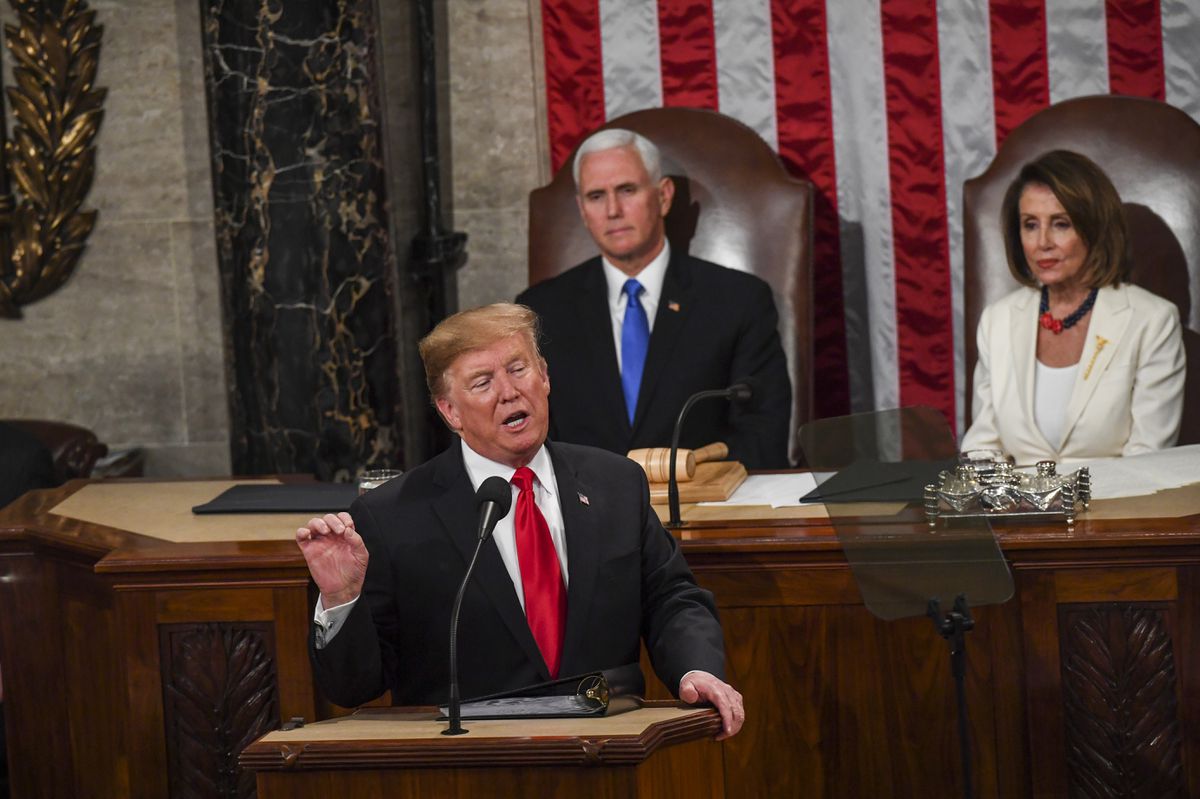 WASHINGTON - For the first time since Democrats took control of the House last year, President Donald Trump’s effort to stonewall congressional efforts at oversight have begun to show some cracks.

On Thursday, a former State Department official set off a firestorm when he defied the White House's no-cooperation strategy and provided Congress with text messages detailing the administration's effort to leverage a meeting with Trump to pressure his Ukrainian counterpart to launch investigations into the U.S. president's political rivals.

And House Democrats are expected to interview other critical witnesses next week as they try to build a case for impeaching Trump over his alleged willingness to seek the help of a foreign leader for his own political gain.

But these rare triumphs are seen as fleeting even by Democrats and serve as a stark reminder of how much the administration has run roughshod over Congress, prompting concerns among constitutional experts and lawmakers that Trump's hostile stance toward congressional oversight is undermining the separation of powers in a way that could have long-term implications for democracy.

"He is shaking the foundations of the republic," said Kerry Kircher, who was House counsel for the Republican majority between 2011 and 2016. "He is poking his fingers into all of the places where we have norms and traditions and things that both parties have respected for years, and he has blown all of those out the window."

Intelligence Committee Chairman Adam Schiff, D-Calif., who has overseen the recent flurry of oversight activity in the House, said the spike in witness cooperation and the willingness of whistleblowers to come forward has been a welcome change in an otherwise frustrating exercise. But Schiff doesn't expect it to last long, predicting the White House will continue what he called its "siege" on documents and witnesses in the coming days.

That's one reason Democrats have decided they can no longer wait on the courts to come to their rescue. If Trump continues to stonewall their investigations - particularly on Ukraine - they will compile a list of his defiant actions and package it into an article of impeachment on obstructing Congress, according to senior Democrats familiar with their strategy.

"The real risk of the Trump administration's blanket stonewalling of Congress is that it's fundamentally altered the balance of power that our framers intended," Schiff said in an interview Saturday. "If a president can thwart congressional oversight that means any future president can be as corrupt as they choose and there's no recourse."

Some liberal Democrats want their party to do more to force compliance with oversight requests, concerned the response to the Trump administration's truculence has been too timid. Lawmakers, including Schiff, have discussed the possibility of trying to fine, censure or withhold money from obstinate Trump officials - but even those possibilities, they warn, may do nothing.

For the 276 days that Trump has faced an adversarial House Democratic majority, his administration has worked systematically to resist congressional investigations and further diminish Capitol Hill's power to keep the executive branch in check.

Administration officials have ignored subpoenas, blocked witnesses from testifying and even defied the legislative power of the purse stipulated in the Constitution.

This past week Secretary of State Mike Pompeo declined to comply with a deadline for handing over documents related to the impeachment inquiry over Ukraine, saying Saturday that while his department would "do all the things we're required to do by law" he considered much of the Democrats' efforts with regard to his department as "harassment."

Under the Trump presidency, Capitol Hill has become accustomed to executive resistance.

Faced with a Congress unwilling to offer funding for a border wall, Trump instead declared a national emergency to get around the legislative branch and dedicate money to the project by taking funds away from military construction accounts. He has also relied heavily on acting Cabinet officials, denying the Senate its role to vet and vote to confirm administration candidates under the "advise and consent" requirement laid out in the Constitution. The top ranks of the Homeland Security Department, which oversees Trump's top policy priority of immigration, are made up almost entirely of acting officials who have not been scrutinized by the Senate.

And throughout his term, Trump has been aided by Republican lawmakers who have shown little appetite to help curb the president's executive authority - hastening the decline of congressional power that had already been chipped away for decades.

"I'm afraid that it makes it easier for future administrations to just ignore the will of Congress," Sen. Chris Coons, D-Del., said of the Trump administration's approach to Capitol Hill. "I frankly am worried that it means there'll be less and less bipartisanship in defending Congress."

The Trump White House is far from the first to clash with Congress's intent on exercising oversight, although experts say this administration's efforts to battle Capitol Hill are unprecedented.

The George W. Bush administration tried to shield some of its top officials - including White House counsel Harriet Miers and chief of staff Josh Bolten - from testifying before and providing information to Congress on the firing of U.S. attorneys by asserting privilege, an argument later rejected by the courts. House Republicans battled with the Obama administration over a controversial gunrunning operation at the Justice Department - launching a legal battle over records that was settled only earlier this year.

But experts say Trump's defiance stands apart because of his unwillingness to engage in any oversight. Ever since he vowed last spring to ignore "all the subpoenas," his subordinates have refused to allow even a single Trump official to cooperate, creating what some experts call a constitutional crisis that Democrats have struggled to respond to and counter.

"It's just gotten steadily worse with each president being more and more resistant to congressional oversight," said former Republican congressman Tom Davis of Virginia, who chaired the House Oversight Committee from 2003 to 2007. "The tendency over the last 40 years has been, the president's party tends to under-investigate and the opposition party tends to over-investigate."

Davis added: "It didn't start with Trump; he's certainly taken it to the next level."

This year alone, the Trump administration has worked to methodically delay and block about two dozen probes into his conduct as president, his personal finances and the policies of his administration. He has stonewalled on everything from security clearances given to his family to his tax returns. He has ignored compulsory measures on his controversial family separation policy at the border and refused to let his staff testify about what they told former special counsel Robert Mueller as part of his investigation into Russia's interference in the 2016 election.

Trump has argued that he is being unfairly treated by a Democratic House that is singularly focused on impeaching him and diminishing the successes of his administration, particularly on the economy. On Friday, he declined to say whether he would cooperate with House investigators, deferring to White House attorneys who Trump said believed the probe was "so unfair."

Despite Trump's active resistance, House Democrats have had some recent luck in their probe of the Ukraine controversy. On Thursday, a former special U.S. envoy to Ukraine, Kurt Volker, turned over a trove of potentially damning text messages that Democrats say clearly show a president willing to leverage foreign aid for political purposes. He also testified voluntarily for 10 hours, the first friendly witness for the Democrats all year.

Their good fortune may continue next week. Marie "Masha" Yovanovitch, the former U.S. ambassador to Ukraine who was recalled from her post in May by Pompeo, has agreed to testify on Friday. Trump called her "bad news" in the now-infamous July 25 phone call with Ukraine President Volodymyr Zelensky.

The committees are also expecting to hear from the whistleblower who initially set off the Ukrainian firestorm by detailing Trump's request that Zelensky probe former vice president Joe Biden, a 2020 presidential candidate, and his son Hunter.

Meanwhile, Gordon Sondland, the U.S. ambassador to the European Union, will give a deposition Tuesday to the three House committees leading the investigations into Trump's pressure on Ukraine. The House panels probably will have to battle the State Department to access Sondland's text messages and other documents.

While Democrats are looking at a possible quick impeachment of Trump this winter, many said they haven't given up on long-term solutions to try to restore Congress's authority. They plan to see half a dozen court cases trying to uphold their subpoenas through, hoping federal judges will at some point validate their oversight.

Schiff also said lawmakers are drafting their own set of "post-Watergate reforms" such as those Congress enacted after President Richard M. Nixon's resignation. One of those will be a bill that would expedite court review of congressional process fights with the White House.

“We are determined to validate and vindicate our oversight responsibilities,” he said.