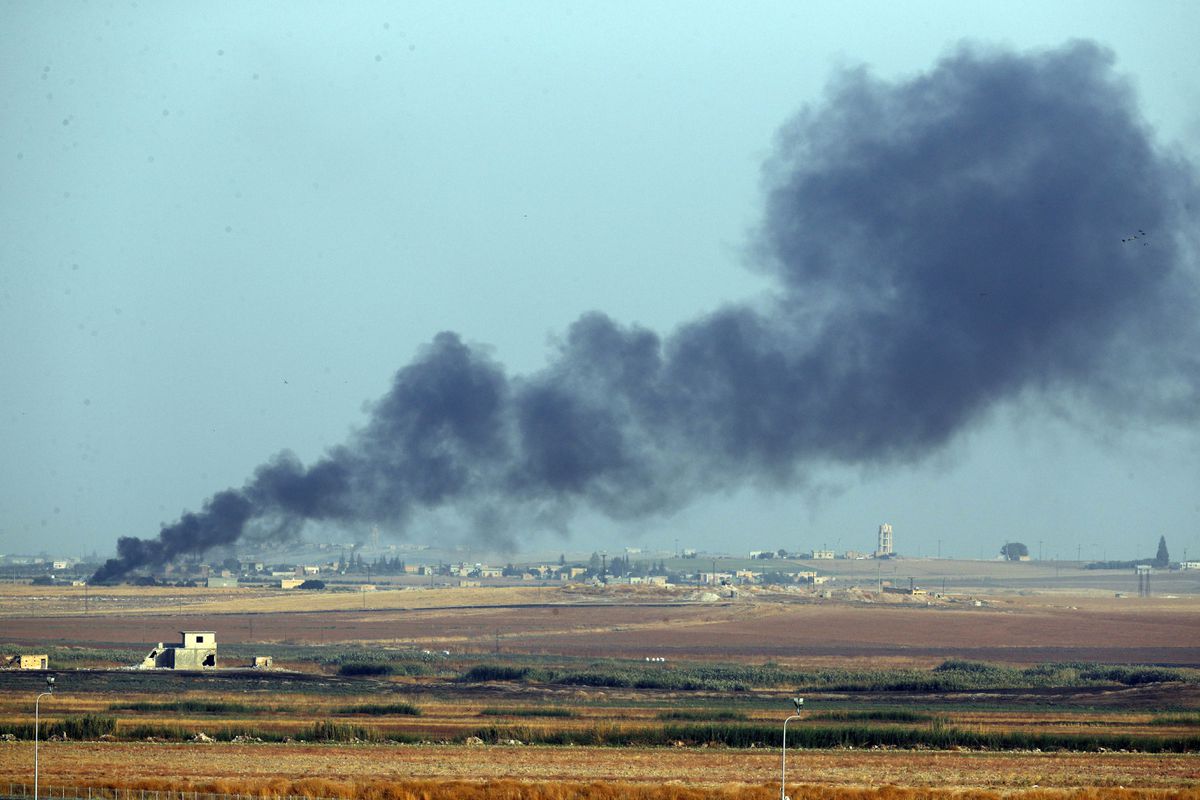 In this photo taken from the Turkish side of the border between Turkey and Syria, in Akcakale, Sanliurfa province, southeastern Turkey, smoke billows from a fire inside Syria during bombardment by Turkish forces Wednesday, Oct. 9, 2019. Turkey launched a military operation Wednesday against Kurdish fighters in northeastern Syria after U.S. forces pulled back from the area, with a series of airstrikes hitting a town on Syria's northern border.(AP Photo/Lefteris Pitarakis)

In this photo taken from the Turkish side of the border between Turkey and Syria, in Akcakale, Sanliurfa province, southeastern Turkey, smoke billows from a fire inside Syria during bombardment by Turkish forces Wednesday, Oct. 9, 2019. Turkey launched a military operation Wednesday against Kurdish fighters in northeastern Syria after U.S. forces pulled back from the area, with a series of airstrikes hitting a town on Syria's northern border.(AP Photo/Lefteris Pitarakis)

ISTANBUL - Turkey's government launched a long-expected offensive into northeastern Syria on Wednesday, with airstrikes and shelling targeting Syrian Kurdish fighters who have played a central role in aiding the U.S.-led battle against the Islamic State militant group.

The operation - with some ground forces crossing the border later - came just days after President Donald Trump's startling announcement that the United States would not stand in Turkey's way, bringing sharp rebukes from even the president's Republican allies.

The Turkish foray threatened to further fracture a war-shattered Syria as Ankara moved to create a "safe zone" after failing to agree on its size and nature during negotiations with the United States.

Turkey's goal is to push back the Syrian Kurds - considered enemies by Turkey - from the border region. Turkey also claims the buffer region would be fit for the resettlement of millions of Syrian refugees residing in Turkey.

But aid agencies warned the offensive could create a new humanitarian crisis, as well as a fresh wave of displaced people and refugees.

An even greater worry was the thousands of Islamic State prisoners and their families held by the Syrian Kurdish forces after the fall of the militant group’s self-declared “caliphate.” A security breakdown at the detention camps could open the way for the fighters and others to slip away.

[U.S. will not secure ISIS prisons if Kurds exit]

Already frightened people were on the move in Syria. Cars, trucks and motorcycles - with no empty seats - streamed away from the border. Black smoke rose from some buildings. Random fires broke out.

Some Turkish ground forces moved into Syria after nightfall. A statement from the Turkish military said a "land operation" began in an area east of the Euphrates River, but gave no further details on the scope of the incursion.

Trump called Turkish offensive was "a bad idea," but also stood by his decision to pull back U.S. forces to effectively clear the way for Turkey.

“Turkey has committed to protecting civilians, protecting religious minorities, including Christians, and ensuring no humanitarian crisis takes place,” he added. “We will hold them to this commitment.”

The past weeks have seen a buildup of Turkish forces on the border, belligerent speeches by Turkish officials, and dire warnings from Turkey's NATO allies and others.

In the first hours of the operation, Turkish warplanes and artillery shelled towns along a 250-mile swath, stretching from Ain Issa, about 30 miles from the Euphrates River to Malikiyah, near Syria's border with Iraq.

Turkish shelling killed at least five civilians, according to the U.S.-allied Syrian Democratic Forces (SDF), as the Syrian Kurdish-led militias are known. Mortar fire from Syria landed in at least two Turkish towns, but caused no injuries, Turkish media reported.

The offensive has presented the Trump administration with a dilemma as it has sought to balance Washington's partnership with Turkey and its links to the Syrian Kurdish forces that helped beat back the Islamic State.

Ankara views the Syrian Kurdish fighters as terrorists because of their links to Turkey's Kurdistan Workers' Party, or PKK, which has waged a decade-long battle in southeastern Turkey for greater autonomy. Turkey has launched cross-border attacks on PKK bases in northern Iraq since the 1990s.

A spokesman for Erdogan, Fahrettin Altun, writing in The Washington Post on Wednesday, called for international support for Turkey's offensive.

"Turkey has no ambition in northeastern Syria except to neutralize a long-standing threat against Turkish citizens and to liberate the local population from the yoke of armed thugs," Altun wrote.

The coming days would make clear whether Turkey intended to conduct a symbolic push across the frontier, or follow through with plans to move deeper into Syrian territory, analysts said.

As the battle approached, residents of Syria's border towns braced for the worst.

Mikael Mohammed, a Kurdish father of three who owns a clothing store in Tal Abyad, a quarter-mile from the Turkish frontier, said he had not had any customers for an entire day. U.S. troops based in the town withdrew early Monday after the White House announcement.

"People who are out there in the streets look as if they are going to someone's funeral . . . People are scared," he said.

The town used to feel safe "when we used to see U.S. troops in the streets of Tal Abyad."

"Yesterday, we saw U.S. troops, but this time they were on their way out of the area, and that terrified people," he said.

By Wednesday afternoon, worry had turned to dread.

"Turkish warplanes have started to carry out airstrikes on civilian areas. There is a huge panic among people of the region," Mustafa Bali, a spokesman for the SDF, wrote on Twitter. Turkey had conducted airstrikes about 25 miles into Syrian territory, according to another SDF statement.

In the town of Qamishli, the SDF traded fire with Turkish forces across the border, according to a farm owner who spoke on the condition of anonymity to avoid possible reprisals. Residents hoarded food and lined up at gas stations. People had started leaving the town, headed further away from the Turkish border, he said.

Apart from scattered skirmishes, the SDF did not appear to be mounting a full-fledge counter attack, according to Dareen Khalifa, senior Syria analyst for International Crisis Group.

"My understanding is that they are still hoping that this would be a strictly limited operation that would not spread to any Kurdish towns, and that they would be able to continue to keep U.S. protection," she said.

"This is a battle the would surely lose," she added, referring to the SDF. "The flat typography favors conventional warfare."

Erdogan's government has watched nervously for years as Syria's Kurds have built an autonomous enclave along Turkey's border. It railed against the United States for relying on the Kurds as a military partner and bristled as their enemies accumulated weapons and territory.

For years, the United States and Turkey have been engaged in tortured negotiations aimed at soothing Ankara's security concerns.

There was also the risk that American troops still positioned in Syria could get caught in the crossfire.

A U.S. official said the Trump administration had provided Turkey with a list of no-strike locations where U.S. personnel were stationed.

The International Rescue Committee warned that two million civilians who lived in the military zone were at risk - "many of whom have already survived ISIS brutality and multiple displacements," the group said in a statement, using an acronym for the Islamic State.

The offensive threatened to displace as many as 300,000 people, the group said.

Already, there were reports of people fleeing the fighting "with only the clothes on their backs."

DeYoung reported from Washington and Khattab from Beirut. Sarah Dadouch and Liz Sly in Beirut and Louisa Loveluck in Irbil, Iraq, contributed to this report.