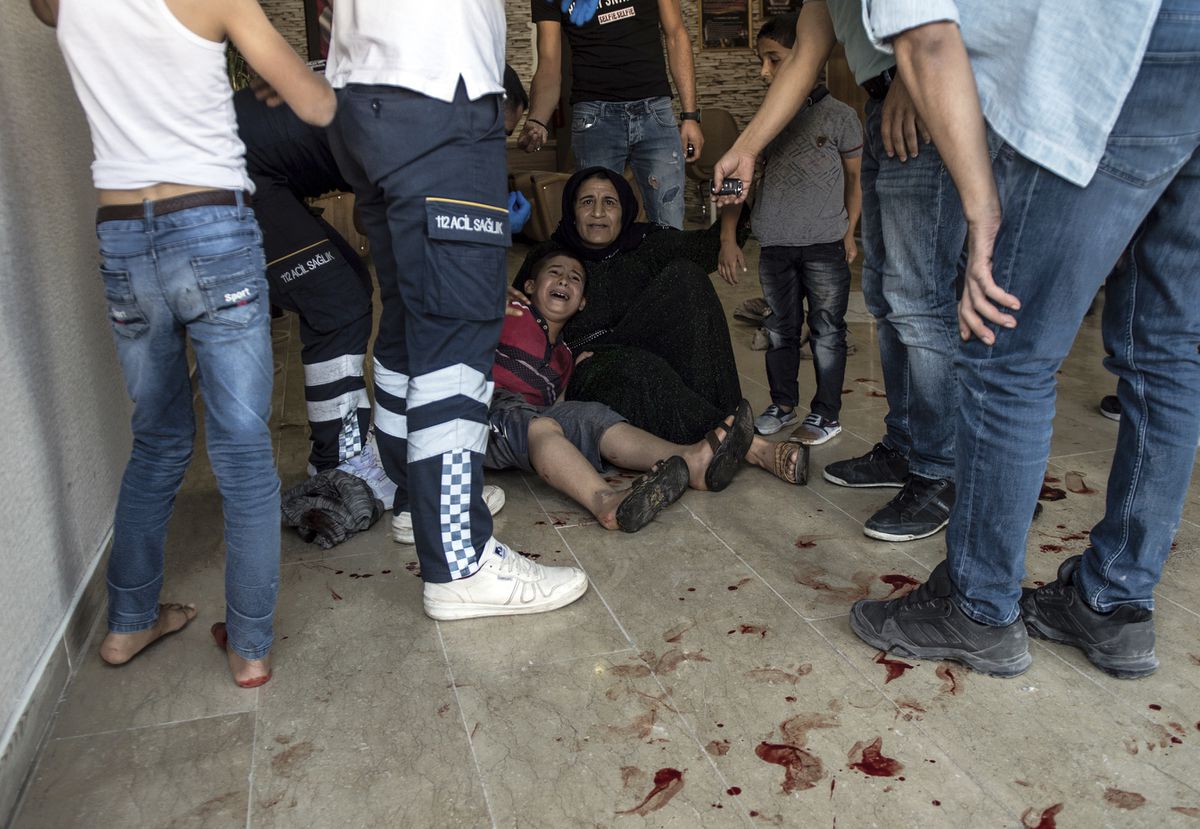 People help a wounded boy as they take cover after mortars fired from Syria, in Akcakale, Turkey, Thursday, Oct. 10, 2019. An Associated Press journalist said at least two government buildings were hit by the mortars in Sanliurfa province's border town of Akcakale and at least two people were wounded. (Ismail Coskun/HA via AP )

People help a wounded boy as they take cover after mortars fired from Syria, in Akcakale, Turkey, Thursday, Oct. 10, 2019. An Associated Press journalist said at least two government buildings were hit by the mortars in Sanliurfa province's border town of Akcakale and at least two people were wounded. (Ismail Coskun/HA via AP )

AKCAKALE, Turkey (AP) — Turkey pressed its air and ground assault against U.S.-allied Kurdish forces in northern Syria on Thursday for a second day, pounding the region with airstrikes and an artillery bombardment that raised columns of black smoke in a border town and sent panicked civilians scrambling to get out.

Amid the fierce fighting, residents fled with their belongings loaded into cars, pickup trucks and motorcycle rickshaws, while others escaped on foot. The U.N. refugee agency said tens of thousands were on the move, and aid agencies warned that nearly a half-million people near the border were at risk.

It was a wrenchingly familiar scene for many who had fled the militants of the Islamic State group only a few years ago.

There were casualties on both sides: Turkish officials in two border provinces said mortar fire from Syria killed at least six civilians, including a 9-month-old boy and three girls under 15. On the Syrian side, seven civilians and eight Kurdish fighters have been killed since the operation began, according to activists in Syria.

The Turkish offensive was launched three days after U.S. President Donald Trump opened the way by pulling American troops from their positions near the border alongside their Kurdish allies.

At a time when Trump faces an impeachment inquiry, the move drew swift criticism from Republicans and Democrats in Congress, along with many national defense experts, who say it has endangered not only the Kurds and regional stability but U.S. credibility as well. The Syrian Kurdish militia was the only U.S. ally in the campaign that brought down the Islamic State group in Syria.

Trump warned Turkey to act with moderation and safeguard civilians. But the opening barrage showed little sign of holding back: The Turkish Defense Military said its jets and artillery had struck 181 targets so far.

Turkish Foreign Minister Mevlut Cavusoglu said the military intends to move 30 kilometers (19 miles) into northern Syria and that its operation will last until all “terrorists are neutralized.”

More than a dozen columns of thick smoke rose in and around the Syrian town of Tel Abyad, one of the offensive's first main targets. Turkish officials said the Kurdish militia has fired dozens of mortars into Turkish border towns, including Akcakale.

As the shelling intensified, cars packed with civilians crowded a bridge linking Syria and Iraq.

"When we came, there were about four lanes of cars on the road and a 1-kilometer-long queue of cars," said Murad Hassan, a Syrian Kurd from Qamishli.

A Kurdish-led group and Syrian activists said that despite the bombardment, Turkish troops had not made much progress on several fronts. Their claims could not be independently verified.

Turkish President Recep Tayyip Erdogan said 109 "terrorists" were killed, a reference to the Syrian Kurdish fighters. He did not elaborate, and reports from the area did not indicate anything remotely close to such a large number of casualties.

Erdogan also warned the European Union not to call Ankara's incursion into Syria an "invasion." He threatened, as he has in the past, to "open the gates" and let Syrian refugees flood into Europe.

Meanwhile, the Kurdish forces halted all operations against IS in order to focus on fighting Turkish troops, Kurdish and U.S. officials said. The Syrian Kurdish fighters, along with U.S. troops, have been involved in mopping-up operations against IS fighters in the desert after their territorial hold was toppled earlier this year.

Ankara says the Kurdish militia is linked to the outlawed Kurdistan Workers' Party, or PKK, which has led an insurgency against Turkey for 35 years. The conflict has killed tens of thousands of people. The U.S. and other Western countries also deem the PKK a terrorist group.

Turkey, a NATO member, considers its operations against the Kurdish militia in Syria a matter of survival, and it also insists it won't tolerate the virtual self-rule that the Kurds have carved out in northern Syria along the border.

The Turkish assault aims to create a corridor of control along the length of the border — a so-called "safe zone" — clearing out the Kurdish fighters. Such a zone would end the Kurds' autonomy in the area and put much of their population under Turkish control. Ankara wants to settle 2 million Syrian refugees, mainly Arabs, in the zone.

Turkey began its offensive, dubbed "Operation Peace Spring," on Wednesday with airstrikes and artillery shelling, followed by ground troops later in the day.

Mustafa Bali, a spokesman for the Kurdish-led Syrian Democratic Forces, said their fighters repelled the Turkish ground attacks. "No advance as of now," he tweeted Thursday.

But Maj. Youssef Hammoud, a spokesman for Turkish-backed opposition fighters in the operation, said they captured the village of Yabisa, near Tal Abyad, a spokesman for the fighters said. In a tweet, he called it "the first village to win freedom."

Clashes took place in the predominantly Kurdish border town of Ras al-Ayn, one of the few urban centers under the Kurdish administration, according to media activists and a war monitor. Syrian fighters backed by Turkey advanced from the eastern and western sides of the town, according to the North Press Agency, which operates in Kurdish-held areas, and the Britain-based Syrian Observatory for Human Rights.

The refugee agency UNHCR said tens of thousands of people have fled their homes since Wednesday, while the Observatory put the figure at more than 60,000.

International aid agencies warned of an escalating humanitarian crisis. The statement was co-signed by 14 organizations, including Doctors of the World and Oxfam, saying an estimated 450,000 people live within 5 kilometers (3 miles) of the Turkish border "and are at risk if all sides do not exercise maximum restraint and prioritize the protection of civilians."

There already are more than 90,000 internally displaced people in the region, it said, with camps and detention centers holding tens of thousands of fighters with families.

Trump's decision marked a stark change in his position from last year, when he vowed to stand by the Kurds, saying they "fought with us" and "died with us." On Wednesday, Trump called Turkey's operation "a bad idea," but also said he didn't want the U.S. to be involved in "endless, senseless wars."

The U.N. Security Council failed to agree on a statement on Turkey's operation following a closed meeting. The five European council members who called the meeting — the U.K., France, Germany, Belgium and Poland — urged Ankara in a joint statement afterward "to cease the unilateral military action." They warned that "renewed armed hostilities in the northeast will further undermine the stability of the whole region, exacerbate civilian suffering and provoke further displacements."

In Copenhagen, U.N. Secretary-General Antonio Guterres said it was "absolutely essential" to de-escalate the conflict.

NATO Secretary-General Jens Stoltenberg avoided any direct criticism of Turkey's operation, but he urged Ankara to show "restraint," noting in Athens that the common enemy in the region is still the Islamic State group.

The Syrian government has condemned Turkey's military incursion and vowed to repel it.

Israeli Prime Minister Benjamin Netanyahu also condemned the operation and warned of "ethnic cleansing" against the Kurds. He said Israel is prepared to extend humanitarian assistance to the "gallant Kurdish people."

Kurdish forces are holding more than 10,000 IS members. Those include 2,000 foreigners, among them two British militants believed to be part of a cell that beheaded hostages. El Shafee Elsheikh and Alexanda Amon Kotey are part of nearly 50 IS members to be moved by Friday from Syria to Iraq, according to two Iraqi intelligence officials who spoke on condition of anonymity because they were not authorized to brief the media.