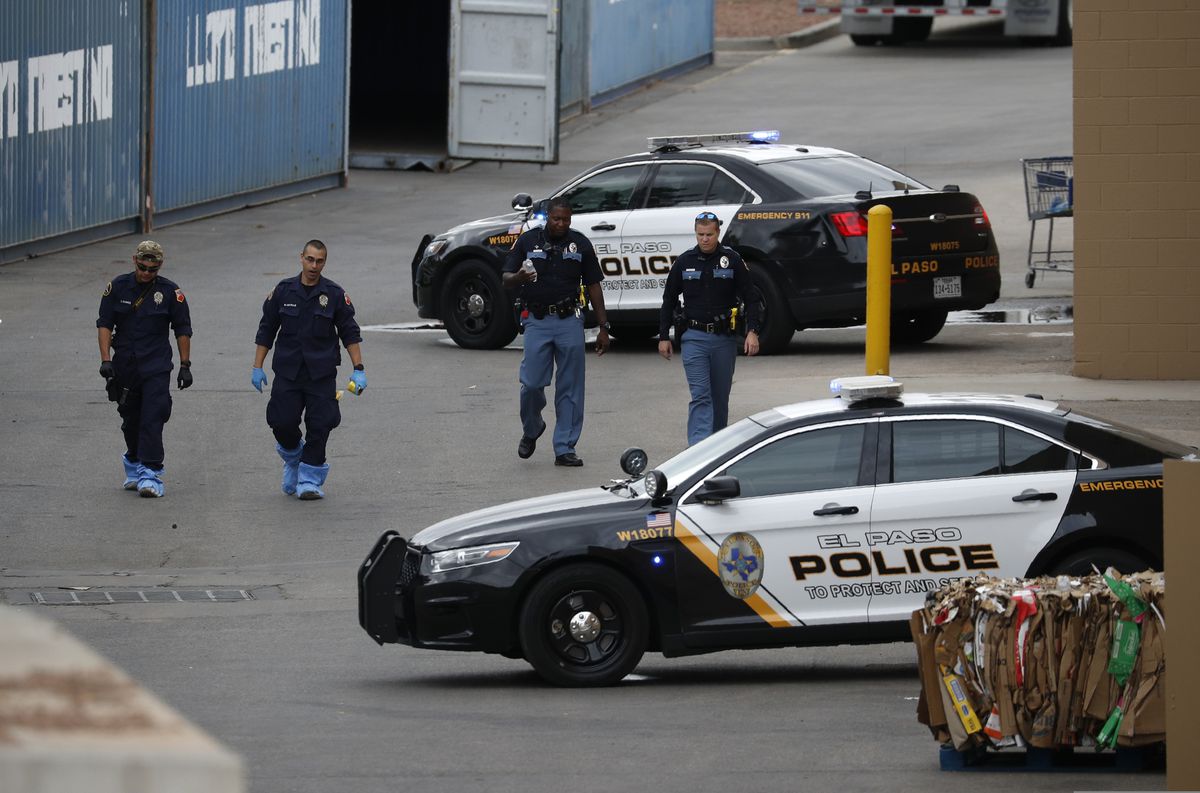 Police officers walk behind a Walmart at the scene of a mass shooting at a shopping complex Tuesday, Aug. 6, 2019, in El Paso, Texas. Patrick Crusius, 21, opened fire Saturday at the mall that largely caters to the local Mexican-American community. (AP Photo/John Locher)

Police officers walk behind a Walmart at the scene of a mass shooting at a shopping complex Tuesday, Aug. 6, 2019, in El Paso, Texas. Patrick Crusius, 21, opened fire Saturday at the mall that largely caters to the local Mexican-American community. (AP Photo/John Locher)

Dozens of injured victims and family members of those slain in the biggest racially driven attack against Latinos in U.S. recent memory watched on in silence. Some wore black for the brief court appearance, which lasted fewer than three minutes.

One of those in the courtroom of about 140 people was Sylvia Saucedo. The sight of the confessed killer teared her up, she said. She remembers seeing him walking inside Walmart, with her view of him from the knees down. She heard him shooting. She crawled under a table and pulled her 91-year-old mother alongside her, took out her cellphone and recorded the chaos that ensued.

When she saw him walk into the courtroom, Saucedo said, “Suddenly I was back inside Walmart. All the memories came back to me. This was very hard, very painful.”

El Paso County District Attorney Jaime Esparza has said he will seek the death penalty. Crusius, 21, had earlier confessed to police. He uttered few words in a low tone during the hearing. The solemn witnesses in the courtoom held their reactions in check as he said, “Not guilty.”

The plea leaves open the option for an insanity defense.

A grand jury indicted Crusius last month on first-degree felony charges punishable by life in prison without parole or the death penalty. U.S. Attorney for Western District of Texas John Bash has also said that his office plans to indict Crusius on federal hate crime, domestic terrorism and firearm charges.

“To say to a judge you’re not guilty says that you’re a coward. We’re talking about a white supremacist, a domestic terrorist,” she said. “That’s unacceptable. Just the way he grabbed his assault weapon, he ought to have the cojones to take responsibility for what he did. Instead, he looked so cowardly in the courtroom.”

She said she attended the hearing because she said she felt compelled to speak up for the victims.

Also in attendance was a representative of the Mexican government. Eight of the 22 victims were Mexican nationals. Mexico’s Foreign Minister Marcelo Ebrard has said the administration of President Andres Manuel Lopez Obrador considers the shooting an “act of barbarism” and “an act of terrorism against the Mexican American community and Mexicans living in the United States.”

Addressing the media after the hearing, defense attorneys said they want to see that Crusius is spared from execution.

“As they say, there are two sides to everything, to every story,” said attorney Mark Stevens. “We ask everyone to keep an open mind.”

Asked whether by pleading not guilty, the team was preparing for an insanity defense, attorney Joe Spencer said, “We won’t answer any questions. The DA has indicated that he intends to seek the death penalty. Mr. Stevens and I are morally opposed to the death penalty so that an issue that we’re going to talk about.

Brian Poe, a Fort Worth lawyer who is a former state and federal prosecutor, said Crusius’ defense options will be limited.

“If I’m defending him I’m getting him evaluated to see if there’s any possibility of an insanity defense,” he said.

That would involve brain scans and checking his medical history for signs of concussions or other brain trauma — anything that could help explain his actions, Poe said.

“You’re going to dig into everything in his life,” Poe said, “to see what led him to where he is right now.”

A plea deal with the state is unlikely, Poe said, due to the number of victims, the nature of the crime and the politics surrounding it. All of the victim families would have to sign off on any sort of plea agreement, he said. “I see this going all the way,” Poe said.

If the insanity defense doesn’t work at trial, the defense team will argue for a life sentence without parole during the punishment phase by claiming “diminished capacity” or something similar, Poe said. But the key for the defense will be not to wait until sentencing to make those arguments.

“You’re laying that groundwork with every witness you can, so you’re not just springing that on the jury at the end.”

For some, Crusius’ appearance in court only reopened wounds and enflamed a debate about how he should be punished if found guilty.

“He not only hurt the victims, but he devastated an entire city and two countries,” said Leticia Mariscal Varela, the cousin of Oliva Rodriguez Mariscal, who was wounded along with other members of her family during the Aug. 3 shooting.

Mariscal said she wants Crusius to spend the rest of his life “conscious about what he did, the horrendous deed. If he’s put to death, he would be rewarded.”

Mariscal said she had no plans to attend the arraignment, nor her cousin.

Geremias Veloz Rocha, 67, who hid behind shopping carts during the rampage, said he also planned to stay away. “The thought of seeing him will renew my nightmares,” he said.

Crusius, a 2017 graduate of Plano High School, has been held at the County Courthouse here since the day he walked into a Walmart in East El Paso, cased the store, buzzing with more than a thousand shoppers — the majority of Mexican descent. He returned to his vehicle where he armed himself and went back into the store wearing protective ear muffs, safety glasses and wielding a high-powered assault-style rifle, according to officials who have studied video surveillance of him inside the store.

Police believe he posted a four-page manifesto to an anonymous message board minutes before the shootings. It was filled with anti-immigrant rhetoric that detailed plans to stop a “Hispanic invasion of Texas” and warned white Americans that foreigners are replacing them.

Police also said that Crusius, who turned himself in, admitted during questioning that he specifically targeted Mexicans in the attack. He is being held without bond.

Critics have blamed political leaders, particularly President Donald Trump, for fueling the fires of anti-immigrant and anti-Hispanic racial discontent by portraying one of the safest communities in the country as a dangerous no-man’s land being invaded by criminal foreigners. Many El Pasoans say they’re being used as political props in his war on immigration.

Jonathan Plant, founder and conductor of the Dallas-based Credo Community Choir, is planning to do a show during Martin Luther Weekend in January in both El Paso and Juarez as a way “to help heal El Paso and “narrow the divide between El Paso and Dallas.”

“When the shooting happened, I, like so many others, felt helpless, hopeless, sad, and furious that this could happen yet again,” he said “While the questions began to flow in my mind, the only thing I could think to do was what I had always done in times of need — bring people in song.”