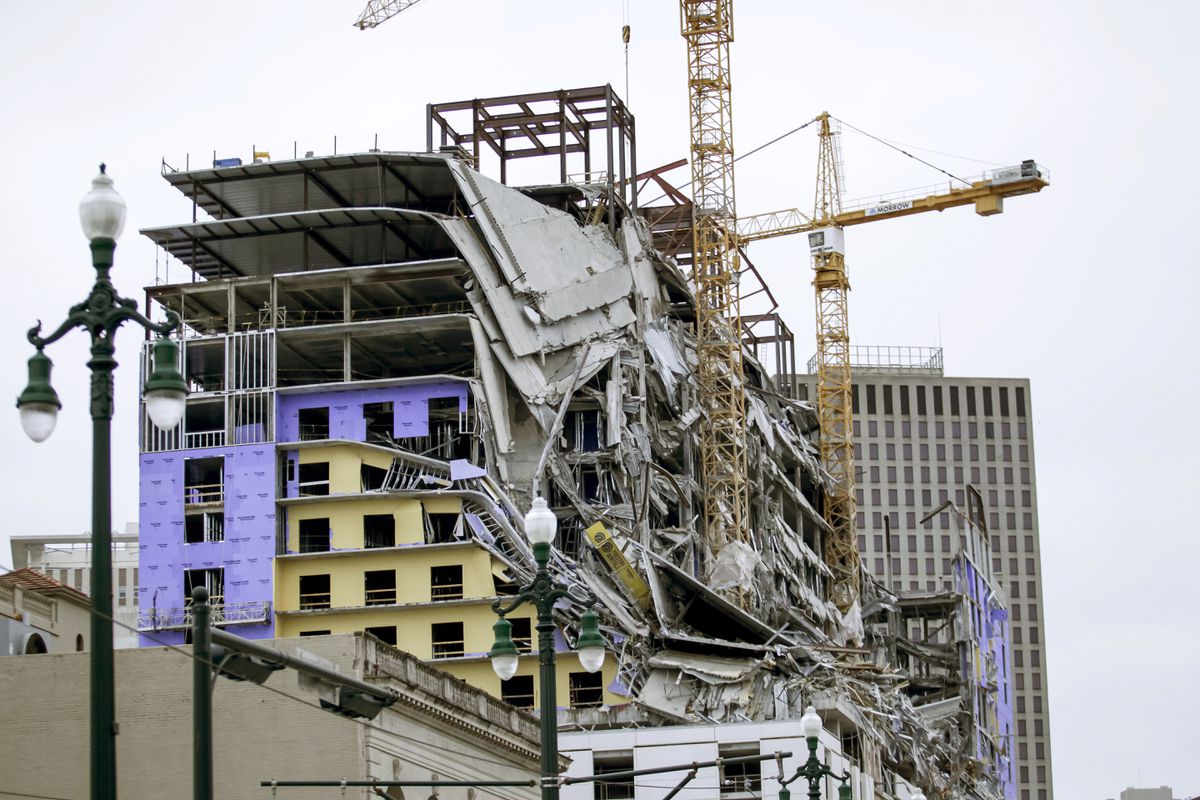 Debris hangs on the side of the building after a large portion of a hotel under construction suddenly collapsed in New Orleans on Saturday, Oct. 12, 2019. (Scott Threlkeld/The Advocate via AP)

Debris hangs on the side of the building after a large portion of a hotel under construction suddenly collapsed in New Orleans on Saturday, Oct. 12, 2019. (Scott Threlkeld/The Advocate via AP)

NEW ORLEANS — A large section of a Hard Rock Hotel under construction at the edge of New Orleans’ historic French Quarter collapsed Saturday amid blinding dust and flying debris, killing one person, injuring more than 20 and leaving two unaccounted as rescue workers hastened to enter what was left of the largely unstable building.

Nearby buildings were evacuated and a 270-foot construction crane — one of two still looming over the multi-story building — also was dangerously unstable, Fire Chief Tim McConnell said.

"There is a very strong possibility of further collapse of this crane right now," McConnell said.

McConnell said urban search and rescue teams on Saturday afternoon were entering a section of the building in hopes of finding the two missing people alive.

Neither of the missing people had been spotted, but McConnell said authorities believe they know their approximate locations based on talks with other survivors of the collapse. Camera-equipped drones were used to get closer views of the wreckage from the air but did not capture any sign of the missing.

One man who had been unaccounted for turned out to have gone to a local hospital, authorities said.

Officials said 18 other people were transported to the hospital from the scene and "several" others reported to hospitals on their own. No life-threatening injuries were reported among the known survivors.

As search and rescue efforts unfolded, police stood sentry around a group of people on the Canal Street median who were believed to be loved ones of the missing.

One woman nearby said she was trying to find out the status of her brother, a worker at the site. She declined to give her name, wiping tears from her eyes as she walked away.

Removal of the damaged crane and cleanup of massive piles of debris promised to be a massive undertaking and it was unclear how long it would tie up traffic and commerce. The site is at a meeting point of major bus and streetcar lines and two major traffic arteries near the heart of the tourism-dependent city's most popular draw for visitor — the French Quarter. Included in the evacuated area was the Saenger Theatre, where traveling companies perform Broadway Shows regularly.

WWL-TV aired and tweeted a viewer’s dramatic video of the collapse, showing upper floors falling on top of each other before one side of the building crashed to the ground.

Another video on social media was taken by someone aboard one of the city's famous streetcars as it approached the site while the building was collapsing. It showed what looked like a metal structure — part of the building or a piece of construction equipment — tumbling to the ground and people running from the scene as clouds of dust billowed up, obscuring the view like a thick fog.

Evacuees included guests at a hostel across the street from the damaged building.

"I heard a huge noise and thought it was a plane crashing. Then, the hostel shook," guest Sue Hurley, 68, told The Associated Press. She said she was reminded of news accounts of the 9-11 terrorist attacks.

Another hostel guest, Michael Arbeiter, 30, from Munich, Germany, said he was just getting out of the shower when the room shook.

"I'm not sure what happened but they told us to get out of here," he said. "I'm supposed to stay until Monday. Thank God it was not another 9-11."

The building was under construction at the corner of Rampart Street and Canal Street, a broad boulevard just outside the Quarter, lined with restaurants hotels and retailers. Canal, which carries six lanes of traffic divided by a wide median where streetcars roll, separates the Quarter from the city’s main business district.

Authorities said 18 people were taken to a hospital for treatment. All were considered stable.

Gov. John Bel Edwards visited the scene and urged people to stay away from the area. As dust settled following the morning collapse, twisted metal, concrete pilings and other wreckage covered part of Rampart Street.

"It was a deep rumbling sound," Matt Worges, who saw the collapse from a nearby building, told The Times-Picayune/The New Orleans Advocate. "Like an airplane maybe. It drew my head immediately."