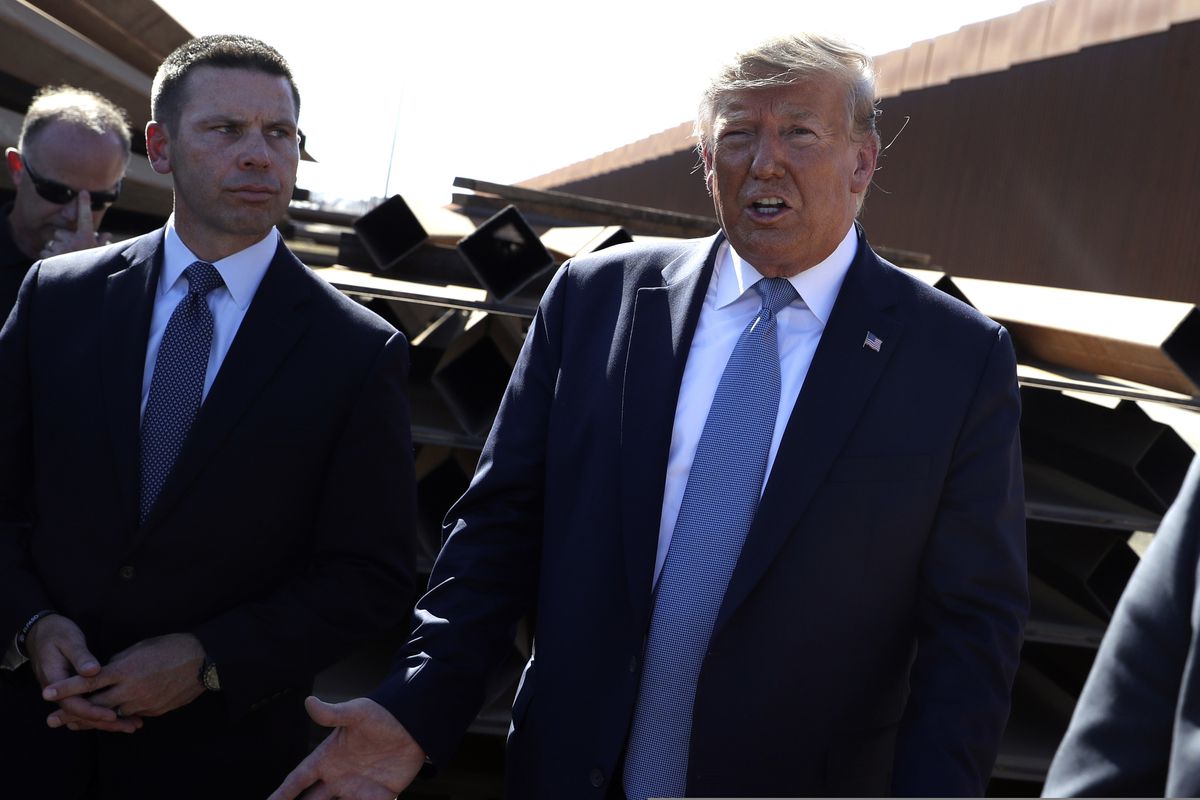 McAleenan leaves the Department of Homeland Security in turmoil, at war with the White House and itself over the Trump administration's aggressive drive to restrict immigration, prioritizing it above the department's other responsibilities, such as counterterrorism and disaster response.

"We have worked well together with Border Crossings being way down," Trump tweeted Friday, announcing McAleenan's departure. "Kevin now, after many years in Government, wants to spend more time with his family and go to the private sector ... "

The president added that he would be naming McAleenan's replacement at Homeland Security next week. "Many wonderful candidates!"

Despite withstanding months of public sniping from the administration and clear policy disagreements with the president, McAleenan also proved an effective implementer of some of Trump's most extreme initiatives to crack down at the border.

In a tweet following Trump's, McAleenan referenced these results, and thanked the president. He reportedly submitted his resignation earlier Friday.

"With his support, over the last 6 months, we have made tremendous progress mitigating the border security and humanitarian crisis we faced this year," McAleenan said. He added that he'd be working with the department and White House on a "smooth transition."

Ultimately, McAleenan's efforts weren't enough for Trump. This reality was recently underscored when Trump refused to back down from a misstatement on Hurricane Dorian, forcing McAleenan, whose department also oversees the Federal Emergency Management Agency, to hold up a doctored chart forecasting the storm's path for cameras in the Oval Office. As McAleenan led Trump in a tour at the border late last month, other officials interjected to defend and praise the president.

Under McAleenan, Homeland Security has been beset by political infighting and frustration between border and immigration officials over the ever-changing directives from the White House and a surge in migrants at the U.S. southern border, current and former officials told the Los Angeles Times.

A Border Patrol agent who asked not to be identified because he was not authorized to speak publicly said morale has suffered as the department struggles to respond to the surge on the border this year. He did not fault McAleenan.

"Politicians have to come together and fix the problems with the immigration system," the agent said, noting McAleenan served "at the request of the president." Still, he said he hopes the churn ends soon. "Ultimately, we do need stability with DHS."

That churn has helped pit Homeland Security agencies against one another.

As U.S. Border Patrol stops more migrants at the border than it has in more than a decade, the administration has pulled Border Patrol agents from front-line patrols to keep watch on migrants at hospitals and overcrowded detention facilities, and pushed for agents to be trained on how to screen asylum-seekers.

McAleenan's department has also reassigned Customs and Border Protection officers who support and screen billions of dollars in commerce at airports and ports of entry to support Border Patrol on the southern border.

Under intense pressure from the White House, a number of asylum officers at Citizenship and Immigration Services are quitting or refusing to implement policies that have forced more than 50,000 asylum-seekers back to Mexico to await their U.S. cases.

Immigration and Customs Enforcement and administration officials are also anonymously criticizing Homeland Security leadership in the media. They blame McAleenan in large part for being forced to cancel a nationwide operation in June targeting thousands of families for deportation, though it was Trump who tweeted about it first. ICE soon after conducted the largest single raid in the agency's history, in Mississippi, without giving advance notice to the White House so the operation wouldn't be foiled.

The Defense Department recently approved tapping into $3.6 billion among 127 projects to construct parts of the wall along the southern border. And yet, despite the president's promises, Customs and Border Protection officials confirmed that no new miles of wall have been added to the roughly 700 total linear miles of the existing border barrier since Trump took office.

In April, when the president picked McAleenan to replace his second Homeland Security secretary, Kirstjen Nielsen, the then-Customs and Border Protection commissioner made for an interesting choice, given the president's deep mistrust of Obama holdovers, and McAleenan's policy differences.

Trump said then he wanted to go in a "tougher" direction, though Nielsen had become the public face of family separation, a widely denounced policy. Her ousting kicked off a purge of top Homeland Security officials, leaving only "acting" personnel at the head of the department and every one of its major agencies. And yet McAleenan not only held but moved up.

Now, McAleenan is expected to be replaced by Mark Morgan, the acting commissioner of Customs and Border Protection, or immigration hard-liner Ken Cuccinelli, the acting director of Citizenship and Immigration Services. The Vacancies Act prevents both from immediately stepping in to head the department ahead of other ranking officials.

When Trump chose McAleenan to replace Nielsen, observers expressed surprise that the anti-immigration advocates holding the president's ear, namely policy adviser Stephen Miller, had acquiesced to a lawyer whom Obama awarded the country's highest honor for civil service in 2015.

McAleenan, 48, raised in Los Angeles and with degrees from the University of Chicago and Amherst College, had tried to join the FBI after the Sept. 11 attacks, but was recruited for Customs and Border Protection instead, where he worked on counterterrorism programs and served as director for Los Angeles International Airport, according to The Washington Post.

First as Trump's Customs and Border Protection commissioner and then as acting Homeland Security secretary, McAleenan has made extensive overtures to counterparts in Mexico and Central America. Even as the White House threatened to slap tariffs on Mexico, one of the United States' largest trade partners, and to freeze aid to Central America's "Northern Triangle," the region responsible for a majority of the migration to the U.S. border, McAleenan has argued that such assistance is critical to stabilizing the region and stemming outward migration.

After replacing Nielsen, Trump told McAleenan he would pardon him if he faced legal challenges for closing the U.S.-Mexico border, according to NBC. McAleenan has denied those reports and others in which the president purportedly pushed his officials to test legal boundaries. But McAleenan also reportedly prepared to resign in June over undercutting from other White House officials and subordinate Homeland Security personnel.

Still, McAleenan has also overseen some of the most substantial shifts to U.S. immigration and security policy in decades.

McAleenan was one of three Homeland Security officials who wrote a confidential memo to Nielsen in April of last year, urging her to detain and prosecute all parents crossing the border with children, hastening family separations. They pointed to an El Paso pilot program, begun by Customs and Border Protection, claiming it had reduced illegal crossings by families by 64%.

He later withdrew his support for the policy, saying in April 2019: "It does deter behavior, but it did not work if you lose public trust. From an enforcement perspective, it's not worth it."

Despite a court ruling and orders from the White House to end the practice, family separation has continued.

Homeland Security under McAleenan has also come under criticism for redirecting resources away from and deemphasizing a growing threat of domestic terrorism fueled by right-wing, anti-government and racist ideologies.

On Aug. 3, a man believed to have posted a racist manifesto online that echoed the president's rhetoric toward immigrants drove to El Paso, authorities say, and opened fire, killing 22 and wounding at least 26 more. Federal investigators have called the attack domestic terrorism.