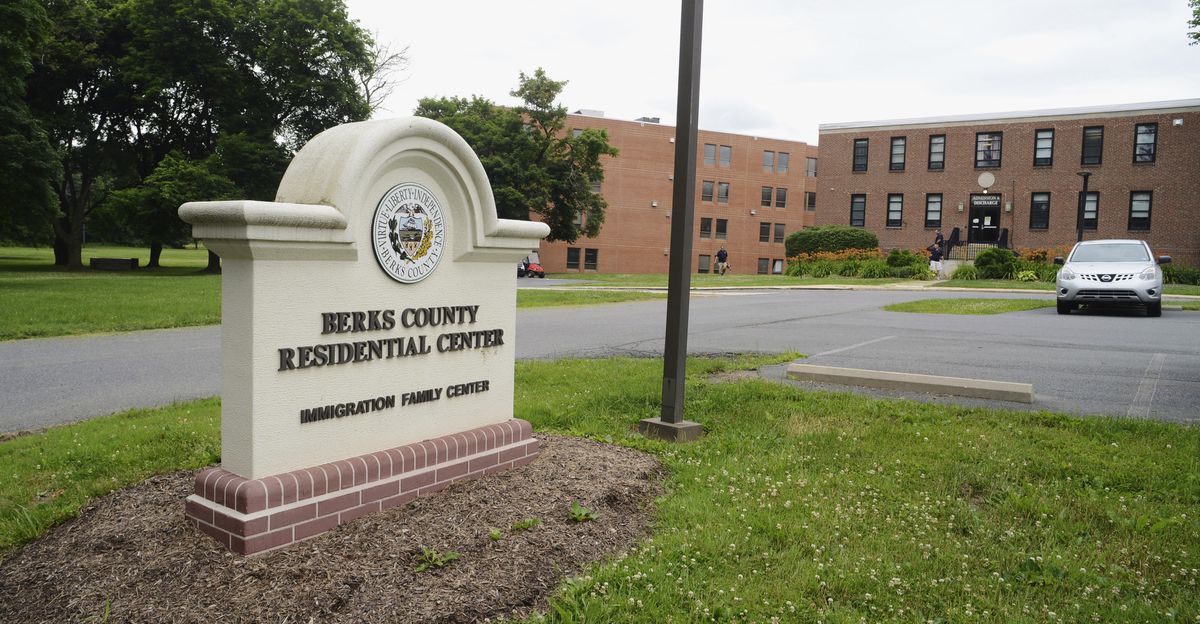 This June 22, 2018, photo shows the Berks County Residential Center in Bern Township, Pa. Several members of an extended British family who made an unauthorized crossing into the United States from Canada are being held in federal custody at the Pennsylvania detention center nearly two weeks after their arrest, their lawyer said Tuesday, Oct. 15, 2019, as U.S. border officials defended their handling of the case by disclosing that two of the adults had previously been denied entry to the country. (Bill Uhrich/Reading Eagle via AP)

This June 22, 2018, photo shows the Berks County Residential Center in Bern Township, Pa. Several members of an extended British family who made an unauthorized crossing into the United States from Canada are being held in federal custody at the Pennsylvania detention center nearly two weeks after their arrest, their lawyer said Tuesday, Oct. 15, 2019, as U.S. border officials defended their handling of the case by disclosing that two of the adults had previously been denied entry to the country. (Bill Uhrich/Reading Eagle via AP)

PHILADELPHIA — Federal immigration authorities say that what a British couple have described as an innocent wrong turn at the Canadian border was actually a deliberate attempt to illegally enter the United States.

The couple and their 3-month-old baby are now detained at the Berks Detention Center in Leesport, Pa.

David Connors, 30, and Eileen Connors, 26, of England, said they were improperly arrested by the U.S. Border Patrol after the car carrying them, their son, and four others veered away from an animal in the road near Vancouver and accidentally entered the United States.

A senior Customs and Border Protection official said on Tuesday that the couple’s car was seen on surveillance video turning into a deep ditch on the Canadian side, and then scaling the other side of the ditch to enter the United States.

The agency also said that two of the adults they detained had previously been denied authorization to travel to the United States. It did not identify the adults, or provide a reason why they had been blocked.

Inside the car, agents found $16,600 in Canadian cash, the CBP official said.

The four adults and three children were processed by Border Patrol and turned over to Immigration and Customs Enforcement on Oct. 3. Efforts were made to return the family to Canada, but Canadian authorities refused to accept them, CBP said in a statement. Two attempts to contact the United Kingdom Consulate were unsuccessful, the statement said.

The family’s lawyer, Bridget Cambria, of Aldea — the People’s Justice Center, said the CBP statement actually confirms her clients’ account. She described an innocent family that mistakenly took a wrong turn, and was now being painted in the worst possible light by authorities seeking to justify their misguided actions.

For instance, she said, the $16,600 in Canadian money — worth $12,600 in U.S. dollars — sounds nefarious until one considers that the sum came not from one person, but from seven people traveling across the country.

“It just corroborates they were a large family on vacation,” she said.

Once the family was in U.S. custody, Canada couldn’t accept their return — they’re not Canadian citizens, she said.

She said her clients described the “ditch” as more of a grass median. They were in the United States about five seconds before being stopped and arrested, she said.

Cambria said the family had filed a complaint with the inspector general of the U.S. Department of Homeland Security, which oversees the nation’s immigration agencies.

[From 2018: A jogger accidentally crossed into the US from Canada and was detained for two weeks]

In its statement, CBP said the car was observed by remote video surveillance turning west onto Avenue 0 in British Columbia at about 9 p.m. on Oct. 2. The vehicle then turned south and entered the U.S. “by slowly and deliberately driving through a ditch” onto Boundary Road in Blaine, Wash. The car was pulled over by the Border Patrol at 9:13.

“They had no idea they had crossed any boundary,” Cambria said on Monday during a conference call with reporters.

All of the occupants of the car, including 2-year-old twins, were taken into custody and moved to Berks.

The Connors said their baby boy has been subjected to frigid and filthy conditions at the Berks lockup, developing blotchy skin and what seems to be an eye infection.

The detention center is one of three facilities in the country that hold migrant families — the two others are in Texas — with a combined capacity of about 3,100 people. It has for years been the target of activist groups such as the Shut Down Berks Coalition, who say it harms children and families.

ICE officials said in a statement that claims of inhumane conditions at Berks are “unequivocally false.” The agency works to ensure the safety of all those in custody, they said.

In a sworn statement, Eileen Connors said her family was visiting Vancouver, never intending to enter the U.S. Her husband’s cousin, Michael Connors, was driving close to the border. When an animal suddenly appeared in the lane, Michael Connors turned to avoid hitting it.

“We have been treated like criminals here, stripped of our rights, and lied to,” Connors wrote. “We have been traumatized. … This would never happen in the United Kingdom to U.S. citizens, or anyone else, because people there are treated with dignity.”

The family’s account is similar to that of a French jogger who last year accidentally crossed the Canadian border into the United States and was quickly arrested by immigration authorities, who detained her for two weeks.

Cedella Roman, 19, was visiting her mother in Canada when she went for a run south of White Rock, British Columbia, according to CBC and CNN. She mistakenly jogged into Blaine — the same town where the Connors family was stopped — and was arrested by Border Patrol officers when she paused to take a photo of the picturesque view.

ICE spokesperson Carissa Cutrell told the CBC at the time that if someone enters the country without inspection, “they have illegally entered the United States and will be processed accordingly.”