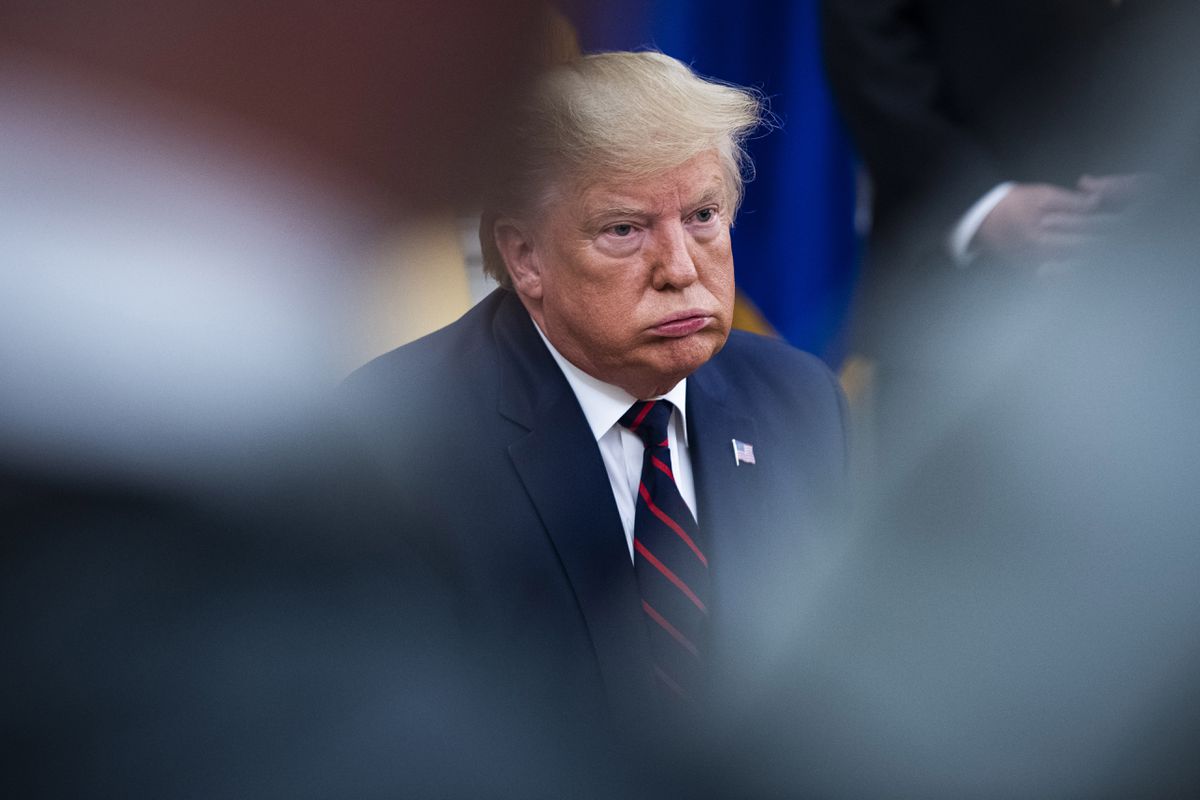 WASHINGTON - President Donald Trump, whose paramount concern long has been showing strength, has entered the most challenging stretch of his term, weakened on virtually every front and in danger of being forced from office as the impeachment inquiry intensifies.

Trump now finds himself mired in a season of weakness. Foreign leaders feel emboldened to reject his pleas or contradict him. Officials inside his administration are openly defying his wishes by participating in the impeachment probe. Federal courts have ruled against him. Republican lawmakers are criticizing him. He has lost control over major conservative media organs. And polling shows a growing share of Americans disapprove of his job performance and support his impeachment.

Many of Trump's Republican allies revolted over his decision to withdraw U.S. troops in Syria, which triggered a bloody Turkish invasion that killed Kurdish fighters and civilians.

Trump bragged about sending a "very powerful letter" warning Turkish President Recep Tayyip Erdogan not to invade Syria. "Don't be a fool!" Trump wrote. But Turkish officials leaked word that their leader had thrown the letter in the trash, and Erdogan then took Trump to task for his "lack of respect."

"Are we so weak, and so inept diplomatically, that Turkey forced the hand of the United States of America? Turkey?" Sen. Mitt Romney of Utah, the Republican Party's 2012 presidential nominee, said in a speech Thursday denouncing Trump's Syria decision as "a bloodstain in the annals of American history."

"America's wars will be 'endless' only if America refuses to win them," he wrote, referencing Trump's frequent argument that his critics want to keep U.S. troops abroad indefinitely.

Senate Minority Leader Chuck Schumer, D-N.Y., said Trump "shows strength at all the wrong times, and then when he needs to show strength, he shows abject weakness."

"When he got on the phone call with Erdogan, he was weak as could be," Schumer said Thursday on MSNBC. "He should have told Erdogan: 'You can't do this. America's not going to let you do this.' Instead, he green lights Erdogan, and then a few hours later sends this ranting, rambling letter that shows ersatz toughness - and to show you the effect, Erdogan ignored the letter."

Meanwhile, Trump's claim of brokering a major trade "deal" with China after months of acrimonious negotiations has been undermined in Beijing, where Chinese officials for the past week have refused to confirm key elements of the supposed agreement - a clear sign of continuing disagreement between the two parties.

"It's deflating when the curtain is pulled back and the Wizard of Oz is a little guy," said David Axelrod, who served as senior adviser in the Obama White House. "If your whole predicate is strength and everywhere you turn there are signs of weakness, it is a danger."

Axelrod added: "His psyche is invested in this facade of the strongman and yet he seems to be heeled by strongmen."

White House press secretary Stephanie Grisham rejected the notion that Trump's position has been weakened in recent weeks, writing in an email, "This Administration continues to deliver real results for this country."

Trump has defended his Syria decision, arguing that it was wise for him to teach the Turks and Kurds a lesson in "tough love." And he has accused House Democrats, as well as the media, of betraying the American people with an impeachment inquiry he argues was designed to overthrow the results of the 2016 election.

"The economy's booming, our people are prospering, our country's thriving and our nation is stronger than ever before," Trump told a roaring crowd of 20,000 at a campaign rally Thursday night in Dallas. "But the more America achieves, the more hateful and enraged these crazy Democrats become. Crazy. They're crazy."

Still, Trump's supremacy is being challenged inside his own realm. With his administration engulfed by crisis, Trump can no longer control the forces once solidly arrayed behind him.

A variety of administration officials, including high-ranking political appointees, have trekked to Capitol Hill to offer damaging revelations during day-long depositions before impeachment investigators.

By testifying, these officials have decided to ignore the Trump White House's unequivocal refusal to participate in a "totally compromised kangaroo court," effectively ripping off the muzzles the president placed over their mouths.

Trump is being humbled by the judiciary as well. A federal appeals court in Washington ruled against the president this month in an extended legal battle over access to his financial data, deciding that Congress could seek eight years of Trump's business records from his accounting firm.

The mounting crises for the administration - including self-dealing accusations over Trump’s decision to host next year’s Group of Seven summit of world leaders at his own Florida resort - has weakened the president’s hold on his party. During Trump’s past controversies, most Republican lawmakers publicly defended the president even if they privately expressed frustration, but now some are speaking out in utter exasperation.

"I think it's not a good thing to have the appearance - you know, in the law, there's a canon that says, 'Avoid the appearance of impropriety,' " said Rep. Francis Rooney, R-Fla. "I think that would be better if he would not use his hotel for this kind of stuff."

They are not alone. One of Trump's greatest political advantages has been the uniformly positive coverage he receives in conservative media, but the firewall of loyal defenders on which he has long relied is cracking.

Trump has been angry with Fox News Channel because he deems the straight reporting, polling and some of the punditry it airs insufficiently adulatory.

After a Fox poll this month found a record 51 percent of Americans support his impeachment and removal from office, Trump erupted. He lamented on Twitter that Fox is "much different than it used to be in the good old days" and complained that it "doesn't deliver for US anymore."

The Drudge Report, arguably the most influential website in conservative media, in recent weeks has run a deluge of negative headlines about Trump in all caps or bright-red type.

Trump is scrambling to keep his political coalition intact. He posted a video Friday on Twitter slamming Romney as "a Democrat secret asset" who had merely been "posing as a Republican" - an ironic charge about Romney, a lifelong Republican, coming from Trump, a former Democrat.

The president's message, typed in all caps, conveyed his urgency: "REPUBLICANS MUST STICK TOGETHER AND FIGHT!"

Trump has long striven to show strength and declare himself a winner, even if doing so requires fabrications. In the 1990s, when his businesses failed and declared bankruptcy several times, Trump recast his role as that of a wily businessman outmaneuvering the bankers trying to take him down.

"All of his books and anecdotes and television appearances are oriented toward a narrative about him being strong and winning," said Timothy O'Brien, a Trump biographer and executive editor of Bloomberg Opinion. "He absorbed this from his father at his father's knee. Fred had a very binary view of the world, that there were winners and losers and there wasn't any in-between."

Trump has some ready assistants in perpetuating his narrative of winning. Just a few hours after acting White House chief of staff Mick Mulvaney's admission of a quid pro quo with Ukraine that brought fresh peril to the administration, which Mulvaney later recanted, Texas Lt. Gov. Dan Patrick took the stage at Trump's Dallas rally.

It's a message that continues to resonate with the president's most ardent supporters, who remain a bulwark against his falling fortunes.

Watching from the arena floor Thursday, Rod Taylor, a 54-year-old mechanic, was convinced.

Asked whether the recent controversies weakened Trump, Taylor responded: "Hell no. He's the strongest president we've ever had."

"Every time somebody says he's weak, he turns it around," Taylor added.

Trump's handling of this impeachment period contrasts with that of the last president to face impeachment, Bill Clinton, two decades ago. Clinton's strategy then was to show the American people that he was focused on doing his job as president and was not distracted by the proceedings on Capitol Hill, much as they gnawed at him.

Clinton paid particular attention to foreign affairs, striving to fortify alliances, whereas Trump strained alliances with his Syria decision and, in the estimation of critics, got played by Erdogan.

"The world leaders rallied behind Bill Clinton," longtime Clinton friend Terry McAuliffe recalled. "I remember talking to Clinton, one of the first calls he got was from [South African President] Nelson Mandela."

McAuliffe, a former Virginia governor, added: "What people loved about Clinton is they knew he was getting out of bed every single day to fight for them . . . Here Trump gets out of bed every day and does angry tweets. It's totally different."

Some of Trump's former advisers are exhibiting less restraint than in earlier periods when it comes to speaking about the president.

John Bolton, who departed as national security adviser last month, is writing a book about his time working for Trump and has retained the same agents who represented former FBI director James Comey for his tell-all, Matt Latimer and Keith Urbahn. He also recently gave a speech criticizing the president's efforts to woo North Korea's authoritarian leader Kim Jong Un and strike a nuclear deal with the rogue nation.

Former defense secretary Jim Mattis, who for months had steadfastly refused to criticize the sitting president, poked fun of Trump during a roast Thursday night at the Alfred E. Smith Memorial Foundation Dinner. Mattis noted that Trump had called him "the world's most overrated general" during a meeting with congressional leaders the day before.

"I'm honored to be considered that by Donald Trump because he also called Meryl Streep an overrated actress," Mattis said, invoking the three-time Academy Award winner. "So I guess I'm the Meryl Streep of generals."

Mattis went on to mock the president's taste for fast food. "I think the only person in the military that Mr. Trump doesn't think is overrated is Colonel Sanders," Mattis said, referring to the Kentucky Fried Chicken founder whose likeness graces the chain's iconic chicken buckets.

The Washington Post’s Mike DeBonis contributed to this story.