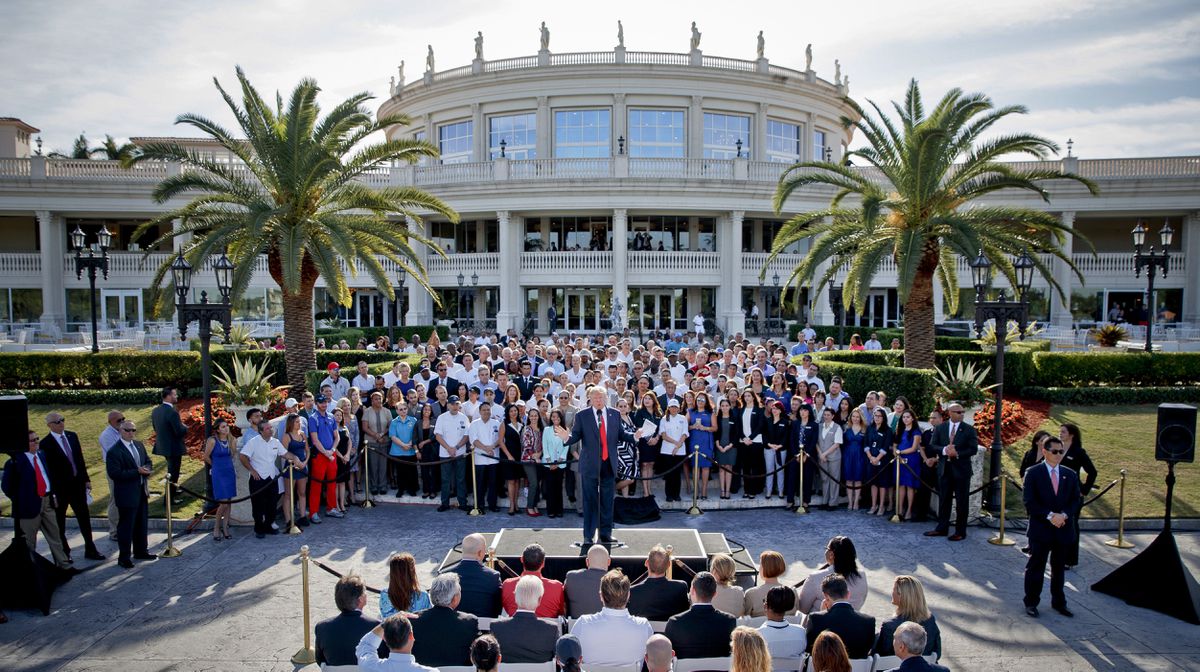 WASHINGTON - President Donald Trump announced abruptly Saturday night that he would no longer host next year’s Group of Seven summit at the Trump National Doral near Miami, bowing to criticism for having selected his own property as the venue for a major diplomatic event.

Trump was buffeted by two straight days of allegations of self-dealing and exasperation from lawmakers on Capitol Hill, including some Republican allies who said the selection of Doral as the venue for a gathering of world leaders was indefensible.

The decision - while it lasted - was an unprecedented one in modern American politics: The president awarded a massive contract to himself. The White House promoted Doral as the single best venue in the United States to host the G-7 summit in June, and the meeting would have brought thousands of guests in the offseason to a resort that is struggling financially.

For months, Trump had touted Doral as an ideal venue to host visiting dignitaries, and acting White House chief of staff Mick Mulvaney made the choice official at a news conference Thursday.

But in a rare reversal in the face of public pressure for a president who prides himself in rarely folding or admitting failure, Trump said Saturday that he and his administration would search for a new location. He attributed the concession to “Irrational Hostility” from Democrats as well as the media, although the revolt among some Republicans may well have been the trigger.

In a trio of tweets late Saturday, Trump wrote, "I thought I was doing something very good for our Country by using Trump National Doral, in Miami, for hosting the G-7 Leaders. It is big, grand, on hundreds of acres, next to MIAMI INTERNATIONAL AIRPORT, has tremendous ballrooms & meeting rooms, and each delegation would have . . . its own 50 to 70 unit building. Would set up better than other alternatives. I announced that I would be willing to do it at NO PROFIT or, if legally permissible, at ZERO COST to the USA. But, as usual, the Hostile Media & their Democrat Partners went CRAZY!"

The president added: “Therefore, based on both Media & Democrat Crazed and Irrational Hostility, we will no longer consider Trump National Doral, Miami, as the Host Site for the G-7 in 2020. We will begin the search for another site, including the possibility of Camp David, immediately. Thank you!”

.....its own 50 to 70 unit building. Would set up better than other alternatives. I announced that I would be willing to do it at NO PROFIT or, if legally permissible, at ZERO COST to the USA. But, as usual, the Hostile Media & their Democrat Partners went CRAZY!

....Therefore, based on both Media & Democrat Crazed and Irrational Hostility, we will no longer consider Trump National Doral, Miami, as the Host Site for the G-7 in 2020. We will begin the search for another site, including the possibility of Camp David, immediately. Thank you!

On Thursday, Mulvaney trumpeted Doral as the best property in the country to host a gathering of this nature. He said that after the president first recommended Doral be considered, an advance team from the White House scouted it along with other sites. After considering locations in California, Colorado, Florida, Hawaii, Michigan, North Carolina, Tennessee and Utah, Doral was selected, Mulvaney said.

"I was aware of the political, sort of, criticism that we'd come under for doing it at Doral, which is why I was so surprised when the advance team called back and said that this is the perfect physical location to do this," Mulvaney told reporters.

Mulvaney's announcement sparked immediate criticism - not only from Democrats but also from some Republican lawmakers who ordinarily defend the president's actions.

"I think it's not a good thing to have the appearance - you know, in the law, there's a canon that says, 'Avoid the appearance of impropriety,' " said Rep. Francis Rooney, R-Fla. "I think that would be better if he would not use his hotel for this kind of stuff."

Doral has been struggling in recent years. The property saw its net operating income decline 69 percent from 2015 to 2017, according to documents the Trump Organization filed with Miami-Dade County.

[Trump’s prized Florida resort is in steep decline, according to company documents]

Hosting the G-7 summit would have been a major boon for the company, filling the hotel in June, a month when the resort is typically less than 40 percent full. Tourism in South Florida generally is not as high in the summer as it is in the winter, in part because of the region's heat and humidity.

The White House had said Trump's resort would only charge "at cost" for the summit, but never spelled out what that cost would be. The questions were still unanswered on Saturday, when Trump pulled the plug.

Beyond questions about the ethics of a president awarding a massive summit to himself, there were also security questions: How could anyone seal off a sprawling resort set among neighborhoods and office parks?

The White House had said that 11 other sites were examined as possible locations but never gave details about them. In his tweet, Trump seemed to indicate he might hold a summit at a site that wasn't on that list: Camp David, the famous presidential retreat in rural Maryland. President Barack Obama held the G-7 meeting there in 2012, the last time the leaders gathered in the United States.

"I understand the folks who participated in it hated it and thought it was a miserable place to have the G-7," Mulvaney told reporters. "It was way too small. It was way too remote. My understanding is this media didn't like it because you had to drive an hour on a bus to get there either way."

Trump has been publicly pitching Doral as a G-7 summit site since at least this past summer. At a news conference during this year's G-7 in Biarritz, France, Trump bragged at length about Doral. He cited its location right by Miami International Airport, ample parking space, restaurants, spacious ballrooms, "bungalows" and "very luxurious rooms with magnificent views."

"It's like such a natural," Trump said. "It's not about me, it's about getting the right location. I think it's very important."

The Washington Post’s Mike DeBonis contributed to this report.