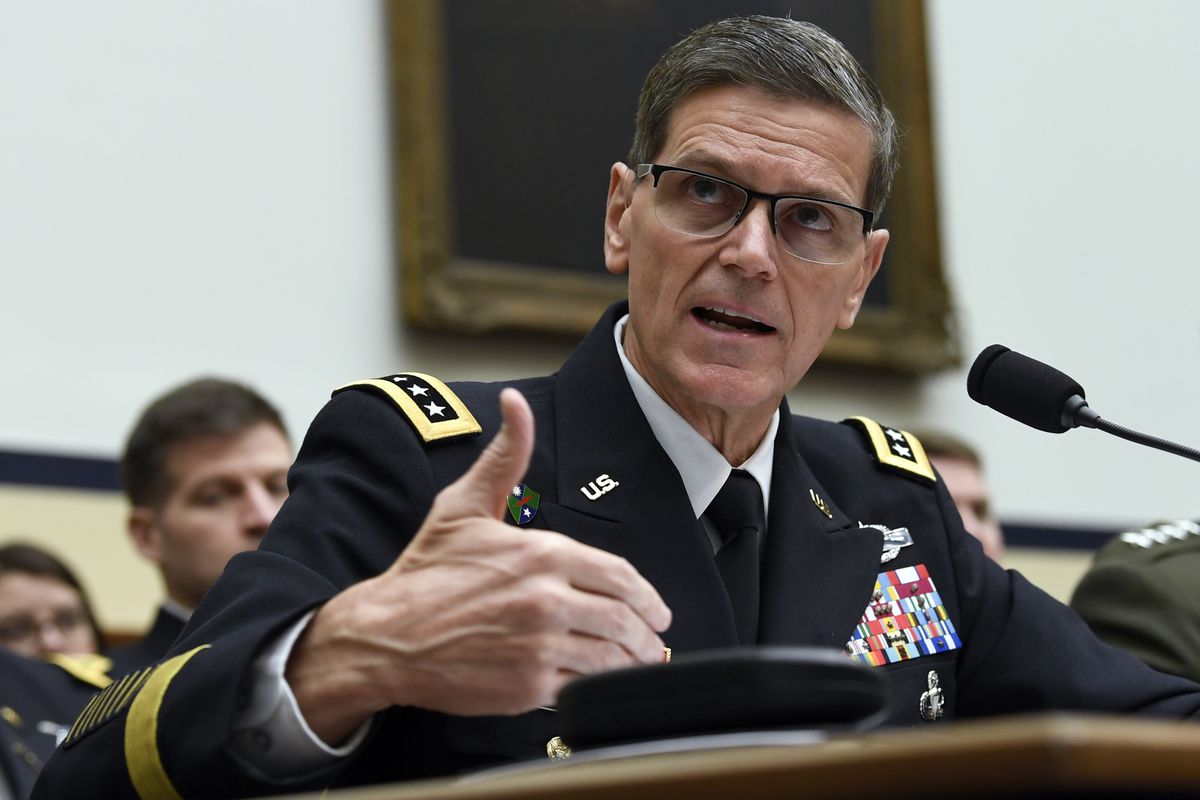 A cascade of criticism by current and former military officials of President Donald Trump’s abrupt withdrawal from Syria has thrust into plain sight internal debates over the military’s role in foreign policy and whether uniformed officials have a responsibility to publicly appraise decisions affecting American security.

Retired Gen. Joseph Votel, who stepped down this year as head of U.S. Central Command, and other former top officers have issued sharp warnings in the days since Trump ordered a sudden exit of nearly all U.S. forces in Syria, leaving Syrian Kurdish forces that have been an important U.S. partner against the Islamic State exposed to an offensive by Turkey's better-armed military.

The "abandonment threatens to undo five years' worth of fighting against ISIS and will severely damage American credibility and reliability," Votel and co-author Elizabeth Dent wrote in the Atlantic.

The hurried drawdown also triggered an unusual wave of commentary, mostly anonymous, by current and former Special Operations troops who predicted that the unceremonious rupture of their partnership with Kurdish forces would spark a militant resurgence.

Those serving in Syria, according to one senior official with knowledge of the mission there, view a cease-fire deal trumpeted by the White House on Thursday as "a total capitulation" to Turkey. "They are livid," said the official, who spoke on the condition of anonymity to speak candidly.

The discontent is straining an axiom that had long guided military officials' conduct, including decisions about publicly weighing in: While elected leaders "have a right to be wrong," the military's role is to execute orders, said Peter Feaver, a scholar on civil-military relations at Duke University

"This comes close to a limiting test of that principle," Feaver said.

The episode follows more than two years in which many Pentagon leaders have chafed at Trump's testing of institutional and foreign policy norms, including questioning alliances and injecting partisan rhetoric into military events. Again and again, uniformed and civilians officials have struggled to publicly reconcile Trump's statements with long-held national security views.

The concerns have prompted some former military officials to set aside what some within the ranks see as a code of military silence, culminating this week in an opinion piece calling for the president's replacement that was written by retired Gen. William McRaven, who headed U.S. Special Operations Command.

The United States is not powerful because of its military or economic might, McRaven wrote, but because its "ideals of universal freedom and equality have been backed up by our belief that we were champions of justice, the protectors of the less fortunate." The president, he implied, has betrayed that.

The comments form part of a history of retired and active duty officers occasionally taking public positions on policy matters or, more rarely, diving into politics. That record includes Gen. Douglas MacArthur's public challenging of President Harry Truman in 1951 and the so-called "revolt of the generals" in 2006 against then-Defense Secretary Donald Rumsfeld.

But the commentaries from those such as McRaven and Votel remain the exception rather than the norm within the Pentagon, potentially indicating both support within the ranks for many aspects of Trump's presidency, which has restored robust funding to the Pentagon, and a belief among many that a general's role is not to make policy calls.

Among those who have voiced that view is Gen. Joseph Dunford, who retired this year after serving as Trump's chairman of the Joint Chiefs of Staff. Dunford, who was first appointed by President Barack Obama and oversaw several divisive moves under Trump such as the redirection of military funds to pay for the Trump's border wall, often said his job was to execute any orders that were legal and fell within the ability of U.S. forces to carry out.

Defense Secretary Mark Esper - who took charge at the Pentagon this summer six months after his predecessor, Jim Mattis, a retired Marine general, resigned over Trump's handling of military alliances - has said he intends to keep the Pentagon out of politics.

Esper has publicly supported the White House's Syria decision, suggesting the administration had no choice but to pull out nearly all 1,000 troops after Turkish President Recep Tayyip Erdogan began preparing to attack Kurdish forces in Syria.

Mattis has repeatedly cited the code of silence as he has sidestepped questions about the president's policies during a flurry of public appearances promoting a new book, prompting disapproval from critics who say he should speak directly about his former boss or remain quiet. Mattis has chided other former military officials, including Flynn and Allen, for their political activism.

The former general made headlines again this week when he joked about Trump during a formal charity dinner. Some commentators interpreted the remarks as a sign Mattis was adopting a more critical stance. But his ribbing did not address the president's handling of security affairs.

Loren DeJonge Schulman, a former Pentagon and White House official, said military views, which tend to be given special credence in today's polarized society, also had the potential to be used for political ends. Or, she said, "what if the military begins using its own political power in a more organized fashion that only represents particular factions?'

Scholars and officers agree that in a properly functioning system, uniformed leaders are supposed to privately share their advice with civilian leaders and, if necessary, their objections about a particular course of action. But some say those norms on which that process was built are now being strained.

"The best way for a democracy to work is not for bureaucracies to slow-roll and second guess" decisions made by elected leaders, said Jason Dempsey, a former infantry officer who writes about civil-military relations at the Center for a New American Security. But the system is also predicated on "good faith among all the factors operating within known bureaucratic boundaries," Dempsey said.

On Saturday, retired Gen. David Petraeus, who commanded U.S. forces in Iraq and Afghanistan, said that "an accumulation of worries" related to the president and what he described as other stressors to U.S. democracy had contributed to former military leaders speaking out."

The inclination by most of my old comrades, and certainly my inclination, has been to perhaps comment on policy from time to time, but generally to avoid certainly becoming perceived as partisan," he told NPR. Several high-profile retired officers have now "felt the need to go beyond that," he said. "There is a real concern."

Derek Chollet, an assistant defense secretary under Obama, said the push-and-pull felt within the military community probably would intensify as what is sure to be a divisive presidential election approaches. "The military, whether it likes it or not, is going to get caught up in this in ways that are going to be very uncomfortable, for it and for us," he said.

The discomfort appeared to be captured this week by a photo tweeted by Trump showing him in a standoff with House Speaker Nancy Pelosi, D-Calif., during a meeting of senior administration and congressional officials at the White House. The president sought to draw attention to what he characterized as a "meltdown" by Pelosi, but the photo also shows Trump's new chairman of the Joint Chiefs, Gen. Mark Milley, sitting to his right.

While most of the officials are looking on at the Trump-Pelosi exchange, Milley, who took on the military's highest-ranking role less than a month ago, is staring down at his hands, his face tight.