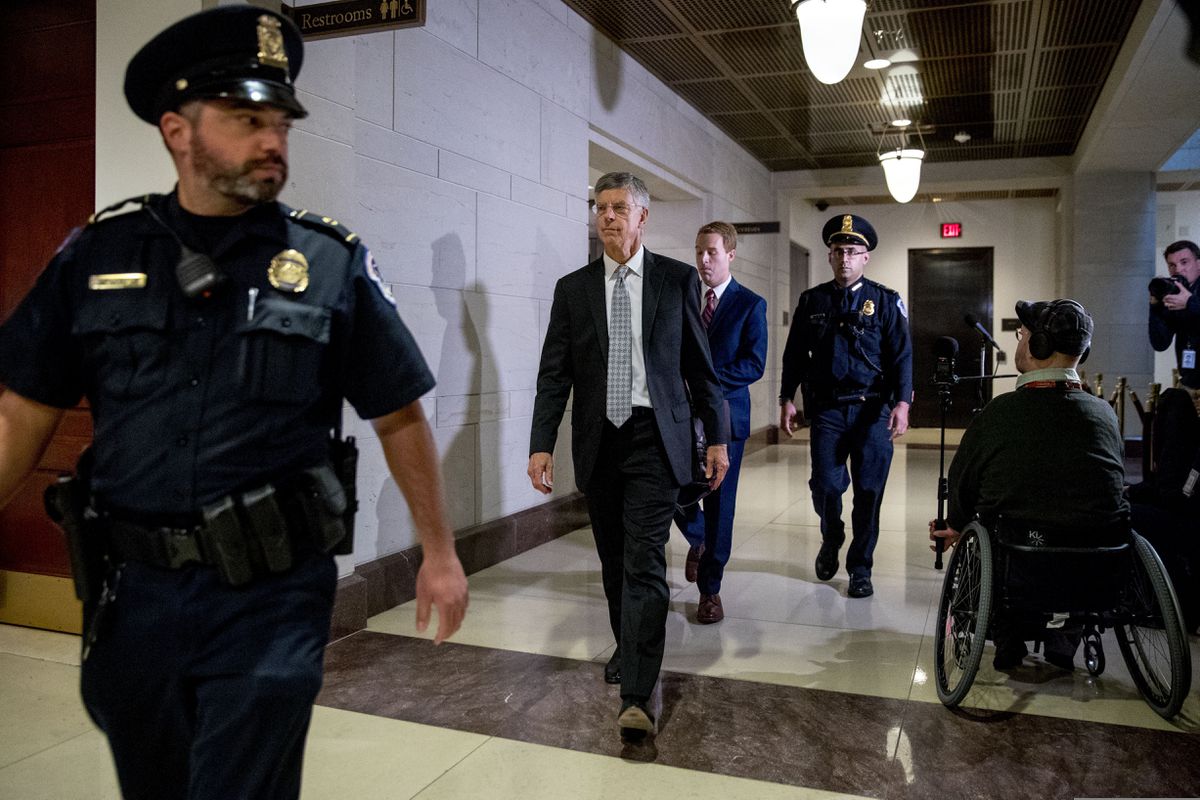 The explosive, closed-door testimony from acting ambassador William Taylor Jr. undermined Trump's insistence that he never pressured Ukrainian officials in a potentially improper "quid pro quo." It also offered House investigators an expansive road map to what Taylor called a "highly irregular" channel of shadow diplomacy toward Ukraine that lies at the heart of the impeachment inquiry.

In a 15-page opening statement, obtained by The Washington Post, Taylor repeatedly expressed his shock and bewilderment as he watched U.S. policy toward Ukraine get overtaken by Trump's demand that newly elected president Volodymyr Zelensky "go to a microphone and say he is opening investigations of [Democratic presidential candidate Joe] Biden and 2016 election interference."

" 'Everything' was dependent on such an announcement, including security assistance," Taylor said he was told by Gordon Sondland, U.S. ambassador to the European Union.

A seasoned diplomat, Army veteran and meticulous note taker, Taylor told lawmakers that former national security adviser John Bolton and other officials from the Pentagon, the State Department and the CIA tried unsuccessfully to get a meeting with Trump to persuade him to release the money - nearly $400 million intended to help Ukraine defend itself against Russia.

But Trump's hold on the aid extended well into September, and Taylor said he found himself considering resignation. "I could not and would not defend such a policy," Taylor said.

The blockbuster testimony came hours after Trump escalated his attack on the impeachment inquiry, tweeting that it was a "lynching" and drawing swift condemnation from Democrats and some Republicans for equating the constitutional process with the barbaric killing of African-Americans.

Taylor's unspooling of events not only contradicted Sondland's testimony, delivered last week, but also posed a test for Republicans who have uniformly defended Trump amid the fast-moving Ukraine saga. Many have cast evidence of a "quid pro quo" - U.S. aid used as leverage for political favors - as the red line that would cause Trump to lose their support.

But Taylor's testimony made plain that, even as Sondland and others told him that the president was not seeking a "quid pro quo," it was clear to him that the arrangement met the dictionary definition.

Some in the GOP were steadfast in backing Trump, who met Tuesday with about two dozen members of the conservative House Freedom Caucus at the White House to discuss having the president's "back" in the impeachment fight.

"There was no quid pro quo," Rep. Mark Meadows, R-N.C., told reporters, insisting that over the six depositions and transcribed interviews that have taken place during the probe, "there is not evidence that there was any condition to the aid."

But another lawmaker who attended the deposition, Rep. Will Hurd, R-Texas, said, "Ultimately, there's more questions. I think people will have to come back in."

"We were glued to his every word. . . . I can't remember what they were gasping at, but there were sighs and incredulous reactions to what we heard. Because he laid it all bare, he laid it bare - the timeline, all of it," said Rep. William Lacy Clay, D-Mo.

"This is a sea change," said Rep. Stephen Lynch, D-Mass., a senior member of the House Oversight Committee who heard the testimony. "I think it could accelerate matters."

White House press secretary Stephanie Grisham said in a statement that the president "has done nothing wrong - this is a coordinated smear campaign from far-left lawmakers and radical unelected bureaucrats waging war on the Constitution. There was no quid pro quo."

While several of Trump's congressional allies rallied to his defense, one senior GOP lawmaker's disavowal of a Trump claim was significant. If the House votes to impeach Trump, the president's fate rests with the Republican-controlled Senate, which would hold a trial and vote to acquit or convict.

Senate Majority Leader Mitch McConnell, R-Ky., was asked about Trump's claim that the lawmaker had described the president's summertime call to Zelensky as "perfect" and "innocent."

"We've not had any conversations on that subject," McConnell told reporters.

Pressed on whether Trump was lying, McConnell said, "You have to ask him. I don't recall any conversations with the president about that phone call."

In his testimony, Taylor told lawmakers that on Sept. 8, after he had begun raising alarms about pressure on Zelensky, Sondland explained that Trump approached the foreign policy matter as a business proposition.

"Ambassador Sondland tried to explain to me that President Trump is a businessman. When a businessman is about to sign a check to someone who owes him something, he said, the businessman asks that person to pay up before signing the check."

Sondland told House investigators last week that he recalls "no discussions" with anyone at the State Department or White House about investigating Biden or his son Hunter Biden, who sat on the board of a Ukrainian gas company, Burisma.

Taylor also pointed to Trump's lawyer Rudy Giuliani as a source of trouble.

"The push to make President Zelenskyy publicly commit to investigations of Burisma and alleged interference in the 2016 election showed how the official foreign policy of the United States was undercut by the irregular efforts led by Mr. Giuliani," Taylor wrote, using an alternate spelling for the Ukrainian leader's name.

Giuliani has advanced a baseless allegation that Joe Biden had intervened in a corruption investigation involving Burisma to keep his son out of trouble. Giuliani has also promoted a debunked conspiracy theory that Ukraine was involved in 2016 election interference that U.S. intelligence agencies have blamed on Russia.

"It was just the most damning testimony I've heard," Rep. Debbie Wasserman Schultz, D-Fla., said in an interview partway through Taylor's testimony.

"He drew a very specific, direct line from President Trump to the withholding of foreign aid and the refusal of a meeting," between Trump and Zelensky, Wasserman Schultz said.

Upon arriving in Kyiv this past spring, Taylor became alarmed by U.S. officials' involvement in secondary diplomatic channels that he called "weird," he said.

Taylor walked lawmakers through a series of conversations he had with other U.S. diplomats who were trying to obtain what one had called the "deliverable" of Ukrainian help investigating Trump's political rivals.

House Democrats are expected to use Taylor's account of his conversations with Sondland to show that Trump had issued clear orders about what he wanted from Zelensky.

"He shared important information about the events surrounding the president's effort to pursue another foreign country to interfere in the American presidential election," said Rep. David Cicilline, D-R.I., who was in the room for the deposition. "I think his testimony was devastating to the president. I think he's filled in a lot of the gaps and connected the dots."

Taylor testified that he first learned about U.S. military aid being leveraged on a promise by Ukraine to investigate Trump's political foes in an early September phone call with Tim Morrison. The top National Security Council official described how Sondland had told a Ukrainian official that "the security assistance money would not come until President Zelenskyy committed to pursue the Burisma investigation," Taylor testified.

Taylor told lawmakers he was "alarmed" by the news. "This was the first time I had heard that security assistance - not just the White House meeting - was conditioned on the investigations," he told lawmakers.

The same day, he texted Sondland to ask whether this was correct, a message that was made public earlier: "Are we now saying that security assistance and WH meeting are conditioned on investigations?" he wrote.

Sondland responded by telling Taylor to call him instead of texting.

A few days later, on Sept. 7, Taylor sent Sondland a series of text messages laying out his concerns about holding up the military aid. "I think it's crazy to withhold security assistance for help with a political campaign," he wrote.

Sondland responded nearly five hours later after he spoke with Trump, insisting there was "no quid pro quo's of any kind" and asked to "stop the back and forth by text."

Taylor said he agreed to go to Kyiv in June as a placeholder ambassador because he thought the U.S.-Ukraine relationship was at a critical moment following Zelensky's election in the spring.

Taylor said that he wanted to reinforce U.S. support for Zelensky's anti-corruption agenda and his independence from Russia, and that he worried the relationship would drift after the forced recall of former ambassador Marie Yovanovitch. He made it clear within the State Department that he objected to her treatment and that he thought the external political "machinations" involving Giuliani that led to her ouster were still present, Taylor said.

Taylor said Secretary of State Mike Pompeo asked him to take the job with the assurance that "the policy of strong support for Ukraine would continue and that he would support me in defending that policy."

Taylor, who has served in government posts in Iraq, Afghanistan and elsewhere, is expected to return to his senior position at the U.S. Institute for Peace sometime next year.

An official working on the impeachment inquiry said Tuesday that Taylor testified under subpoena after the State Department attempted to block his appearance.

His was the first of two planned closed-door depositions this week.

Laura Cooper, a deputy assistant secretary of defense whose portfolio includes Russia and Ukraine, will testify Wednesday, according to an official working on the process.