I just took the world’s first 20-hour flight. Here’s what it did to me. 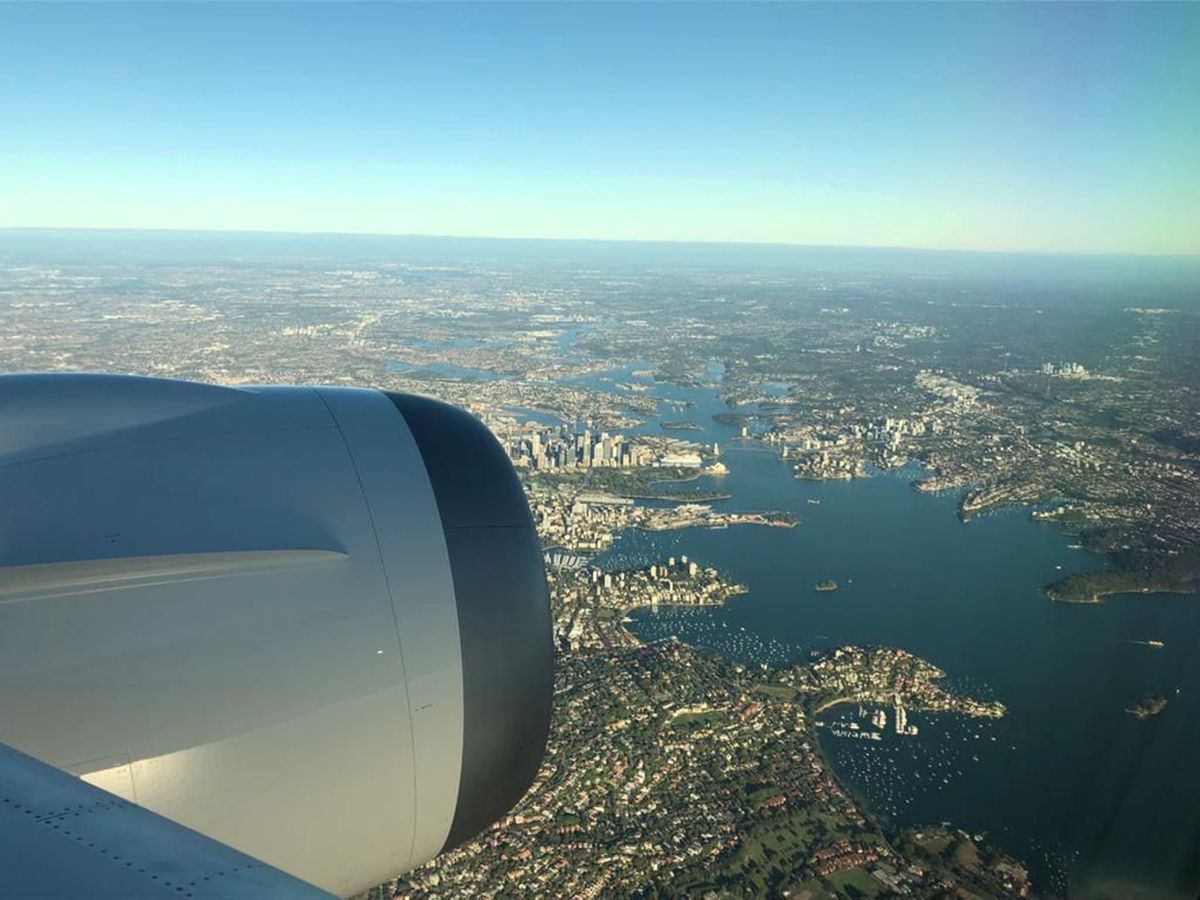 A view of Sydney from on board the Dreamliner. (Angus Whitley/Bloomberg)

A view of Sydney from on board the Dreamliner. (Angus Whitley/Bloomberg)

I’ve just endured the world’s newest longest flight, a 10,100-mile nonstop ultramarathon from New York to Sydney. It took about 19 and a half hours, and was almost as demanding as that sounds.

The record-breaking Qantas Airways flight touched down early Sunday morning in Australia. The Boeing Dreamliner delivered its few dozen passengers - including yours truly - to their destination more or less intact, even if some of us were not quite sure what day it was.

Qantas wants to begin flying the time-saving route commercially as soon as 2022, so the airline used this test trip to explore ways to reduce its inevitable downside: Soul-crushing, body-buckling jet lag. Here's how my journey unfolded in real time.

It's shortly after 9 p.m. in New York, our plane has just left JFK International Airport and it's already become a flying laboratory. Since the goal is to adapt to our destination's time zone as fast as possible, we click into the Sydney clock right off the bat. That means no snoozing. The lights stay up and we're under instructions to stay awake for at least six hours - until it's evening in Australia.

This immediately causes trouble for some passengers.

Down one side of the business-class section, six Qantas frequent flyers are following a pre-planned schedule for eating and drinking (including limiting alcohol), exercise and sleep. They wear movement and light readers on their wrists and have been asked to log their activities; they've already been under observation for a few days and will be monitored for 21 days in total. Most of them are bingeing on movies or reading books, but one of them is dozing within minutes. To be fair, I feel his pain. It may be the middle of the day in Sydney, but my body is telling me it's pushing midnight back in New York.

It's feeding time, and a key moment in the experiment. The specially designed dishes are supposed to fire me up, and a flavorful serving of poached prawns with chili and lime is like a gentle culinary slap in the face. Spicy Chinese-style cod with jasmine rice and sesame seeds repeats the explosive action. I'm momentarily awake.

The plane's 40 passengers, including media, are all in business class: With so few passengers, nobody needs to travel economy. In an interview, Chief Executive Officer Alan Joyce tells me the real Project Sunrise flights - if they go ahead - will have more legroom in economy than standard planes, and there will be some space at the back of the aircraft for stretching.

The six human guinea pigs at the heart of the research are seated on one side of the cabin. I want to do my own set of tests to see how my body is holding up.

After speaking to a travel doctor in Sydney before the trip, I'm armed with equipment to monitor my blood pressure, heart rate and oxygen-saturation levels. I've also got a memory test and a mood questionnaire. I want to see if a flight this long impairs my brain or dims my spirits.

The three-hourly tests I take during the first half of the flight reflect the demands of this trip. My blood pressure is elevated, though not high, and my heart rate picking up. My mood is light, though darkening very gradually.

The physical pressure of this experiment is clear. Around me, passengers are standing up just to stay awake. The crew have been asked to keep sleep diaries, and to use iPads to rate their fatigue, reaction times, workload and stress. That dozy frequent flyer at the front of the plane is asleep, again.

While I'm finding this regime fairly challenging - and I'm not even in a do-it-tough economy seat - I try to keep things in perspective. After I first wrote about this upcoming flight last week, one reader emailed to urge me into a stouter mindset. During the Korean War in the early 1950s, he said, he regularly flew 40-hour reconnaissance missions with crew rotations every six hours. "Man up," the 83-year-old told me. Point taken.

Marie Carroll, a professor at the University of Sydney who's overseeing the passenger research on the flight, rallies her troops at the back of the plane. "This is the time, guys, when we really have to work through this," she tells them. Moments later, they're leaning against the food trolleys in the galley, stretching. Next, they perform upright press-ups among the empty economy sets. As a finale, they attempt synchronized dance moves in the aisles. All in the name of science.

It looks like cabaret, but beating jet lag is serious business. Beyond the sleepless nights and daytime fatigue, experts say critical processes including heart function and metabolism are upset when the body clock gets disrupted.

A second meal arrives. For me, being fed twice in a relatively quick succession has really helped time pass quickly during the first part of the flight. This part of the menu should mean the next few hours slip by too: It's heavy on carbohydrates and designed to send us to sleep. The sweet potato soup with creme fraiche is thick and luxurious, the toasted cheese sandwich less so. The chef on the plane tells me he's been preparing our meals for three days.

The lights are dimmed at last, and it feels like I've been released. I crash for six hours straight. That's longer than I can remember sleeping without waking on any other flight, even with the business-class privilege of a flat bed.

Across the board, my own medical tests suggest I'm coping. My blood pressure, which the doctor in Sydney said would be a good gauge of stress and fatigue, is back to normal. My heart's pumping slower, I ace my memory test, and my questionnaire shows my mood is brighter.

The research on the passengers and crew will feed into Project Sunrise, Qantas's plan to start direct commercial services connecting Sydney with New York and London. Other super-long flights from Australia's eastern seaboard to South America and Africa might follow, Qantas says.

On board, Joyce tells me he'll "absolutely" roll out this flight's regime on his other long routes - if the science shows it helps. The trick is accommodating those who want to drink and snooze at will, Joyce says.

But don't go booking your round-the-world flights just yet. Qantas needs new planes from Boeing or Airbus SE that can do the job with a full load of passengers, and a new deal with crew to work longer than 20 hours. "It needs everything to come together," Joyce says. He initially had dreams of turning these super-long flights into flying hotels, with sleeping berths or a work-out zone. That vision gave way to reality when profit margins proved too tight to waste space on such luxuries.

Our plane doesn't have the range to haul a full load of passengers with luggage to Sydney. It took off with its fuel tanks maxed out - about 101 tons. To keep the weight down, there's no cargo, and food and drink are limited. In New York, the captain had seemed confident we'd make it to Sydney with gas to spare. He planned on landing with six tons of fuel, enough to stay airborne for another 90 minutes.

Breakfast time, and there's no limp sausage. Instead, it's a bowl of ancient grains, avocado puree, warm haloumi cheese and a herb salad. This flight is turning everything on its head.

One of the frequent flyers, Sydney-based investor Nick Mole, says he got almost eight hours' sleep and feels good. What about a full day's work after landing? "I probably could do that," he says. He thinks the bigger test will be how he copes in a couple of days.

I feel better now than I did after flying to New York from Sydney a few days ago with one stop. The dozen or so hours it took to reach Los Angeles were followed by a grating hour and a half queuing at immigration with hundreds of other zombified travelers.

As our plane approaches its destination, Joyce addresses everybody on board. He tells us the flight has given him more confidence that Project Sunrise can work. And come Sunday lunchtime in Sydney, I'm feeling jaded but far from debilitated. I even make it through a children's birthday party, surely an acid test of anyone's nerves.

Personally, I would choose a direct Sydney-New York flight over one with a layover. But it won't suit everyone: It took discipline and work to stick to the no-sleep routine in the first half of this flight. There may be a benefit to switching to the destination time immediately, but it comes at a price. I feel like I had to earn it.

The author traveled to New York at Bloomberg’s expense to join the Qantas flight back to Sydney.