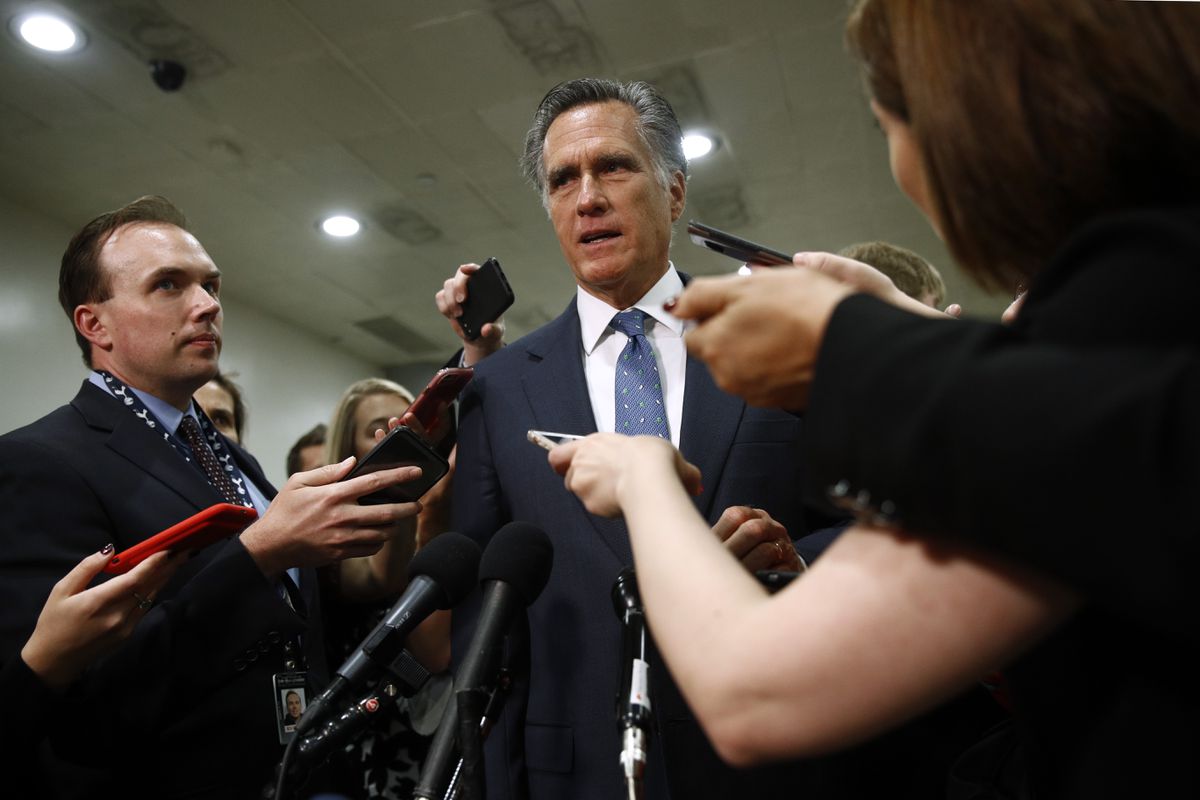 "Why are we talking about Pierre Delecto," one person asked.

"WTH is a Pierre Delecto & why is everyone going crazy about it?" another wanted to know.

On Sunday, Twitter users lost their collective minds when they learned that Pierre Delecto wasn't a bot or a random Romney superfan, but an account run by the Republican senator himself. As Delecto, Romney, who has become one of President Donald Trump's most vocal GOP critics, used the account to like critical tweets about the president, while also occasionally defending himself against detractors. By early Monday, the unusual pseudonym was a trending moment on Twitter and had been mentioned in more than 47,000 tweets.

I think people on both sides of the aisle can admit that Pierre Delecto is an amazing fake twitter name.

The Romney-Delecto connection was first made by Slate’s Ashley Feinberg, who went hunting for the secret account after the senator mentioned its existence to the Atlantic in a profile published Sunday. In a follow-up call with Atlantic reporter McKay Coppins, Romney confirmed that the account, which has since been made private, is his.

"C'est moi," Romney said after being asked about Delecto.

When reached for comment late Sunday, a spokesperson for Romney responded by emailing The Washington Post a link to a tweet from Coppins that contained Romney's brief confirmation.

Just spoke to @MittRomney on the phone, and asked him about Pierre Delecto. His only response: "C'est moi." Updated my story accordingly: https://t.co/kcfIopokWh

Romney brought up his covert Twitter persona during an interview with the Atlantic as he discussed Trump lashing out at him on social media. The 72-year-old senator has condemned Trump for allegedly attempting to get officials in Ukraine to dig up dirt on former vice president Joe Biden and slammed the president's decision to withdraw U.S. troops from Syria. In response, Trump has labeled Romney a "pompous 'ass' " and called for his "impeachment," though senators cannot be impeached.

According to Coppins, Romney shrugged off Trump's insults and grabbed an iPad off his desk during the interview.

"He explained that he uses a secret Twitter account - 'What do they call me, a lurker?' - to keep tabs on the political conversation," Coppins wrote.

The senator declined to name the account, noting only that he was "following 668 people," listing journalists, late-night comedians and athletes, Coppins reported.

But those slim details were more than enough for Feinberg, who previously discovered that former FBI director James B. Comey was on Twitter using the alias "Reinhold Niebuhr."

The process, Feinberg wrote, hinged on the assumption that "Romney, a known family man, would want to keep close tabs on his offspring." Instead of targeting his family members with tens of thousands of followers, Feinberg homed in on a public account belonging to Allie Romney Critchlow, the senator's oldest grandchild. Critchlow's account "has just 481 followers, making digging through them an annoying-but-not-impossible feat," Feinberg wrote.

Then, as Feinberg looked through Critchlow's followers for users who "appeared to make an effort to conceal their real identities," one caught her attention: Pierre Delecto.

A deeper dive into Delecto's account found that it matched the description Romney gave to the Atlantic. The account was created in July 2011, shortly after Romney announced he was going to run for president, Slate reported. Beyond politicians, political reporters and pundits, Delecto follows late-night hosts Conan O'Brien, Jimmy Kimmel and Jimmy Fallon and athletes such as New England Patriots quarterback Tom Brady and former Green Bay Packers quarterback Brett Favre, according to Slate.

The clues pointing to Romney continued to add up, Feinberg wrote. The first user Delecto followed was Tagg Romney, the senator's eldest son. The account later followed a number of people associated with Romney, such as advisers, aides and reporters who have covered him.

Another clue was Delecto's Twitter activity. In the past eight years, Delecto has liked 257 tweets and only tweeted 10 times, all of which were replies to other Twitter users. According to Slate, Delecto liked nearly 70 tweets that either came directly from Romney's official accounts or were posts quoting from those accounts.

Screen shots from the account show Delecto liking tweets that praised Romney's criticism of Trump's Syria decision. Delecto also liked tweets denouncing Trump, including one that read, "If this is a stable genius, I would hate to see what an unstable idiot would do," and another criticizing the president for playing golf amid the Syria crisis.

But perhaps even more telling were Delecto's sparse tweets, several of which defended Romney.

"Only Republican to hit Trump on [Mueller] report, only one to hit Trump on character time and again, so Soledad, you think he's the one without moral compass?" Delecto wrote earlier this year in response to a critical tweet from journalist Soledad O'Brien, who had called out the senator for his "utter lack of a moral compass."

The account's most recent tweet, dated Saturday, appeared to be a tongue-in-cheek response to conservative radio host and blogger Erick Erickson applauding Romney for taking a public stand against Trump.

As some praised Romney for the name, describing it as "exquisite" and "objectively terrific," others were reminded of equally distinctive pseudonyms used by public figures in the past.

Former New York Rep. Anthony Weiner used the alias "Carlos Danger" to send explicit photos to at least one woman. Former pro football player Michael Vick allegedly referred to himself as "Ron Mexico" in an attempt to hide his identity while receiving treatment for herpes. Even Trump has used a fake name, going by "John Barron" when he pretended to be his own spokesman in the 1980s.

Some pointed out that this also isn't the first time Romney has adopted a false identity. In 2012, the Stanford Daily reported that when Romney was a freshman at the university, he used the name "Tim Yenmor," or Mitt (minus a T) Romney backward, in an effort to foil a rival school's planned prank.

It remains unclear exactly how Romney decided on "Pierre Delecto," but that didn't stop eager Twitter sleuths from trying to figure it out.

People suggested that "Pierre" might come from Romney's time spent as a missionary in France and that "Delecto" could be a reference to the Latin phrase "in flagrante delicto," which translates to "while the crime is blazing," according to Merriam-Webster.

The Washington Post’s Brent Griffiths contributed to this report.