Democrats see weak spots in their own 2020 prospects 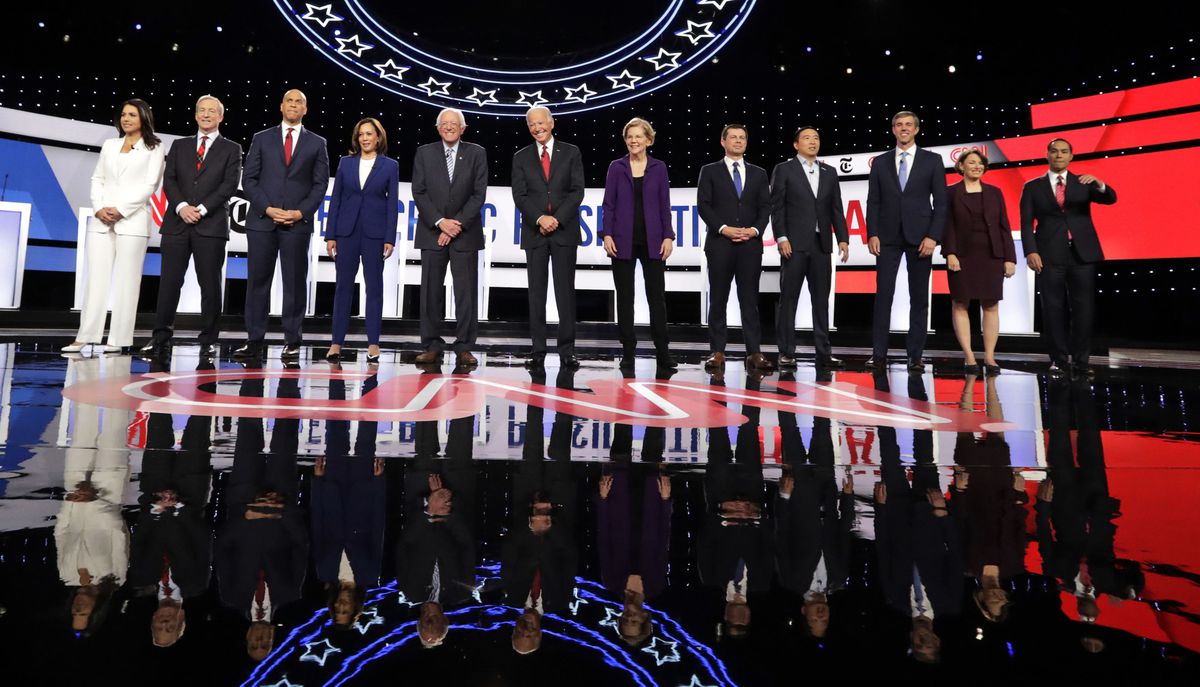 WASHINGTON - When the 2020 Democratic presidential contest kicked off earlier this year, the massive field was hailed as the most diverse in history, with candidates who spanned the ideological spectrum and offered enough in a broad buffet of options to entice any voter. But after 10 months of campaigning and 15 hours of nationally televised debates, another emotion is rising: anxiety.

Party leaders and activists are citing weakness in all of the leading contenders, including former vice president Joe Biden, who has been forced on the defensive about his family's ethics, performed haltingly in debates and set off alarms with his poor fundraising. They also fret that the two other top-ranking candidates, Sens. Bernie Sanders, I-Vt., and Elizabeth Warren, D-Mass., are too liberal to win a general election. Other candidates have had moments to shine, but none yet has fully transformed that into anything approaching momentum.

Oprah Winfrey, an early backer of Barack Obama who was initially enthusiastic about former Texas congressman Beto O'Rourke, has repeatedly begged Disney CEO Bob Iger to jump into the race. Hillary Clinton, according to two people close to her, has not ruled out jumping in herself, a sign that she is hearing similar dissatisfaction.

"You can imagine much stronger candidates," said Elaine Kamarck, a Democratic National Committee member. She pines for Sen. Sherrod Brown, D-Ohio, who declined to run, or an outsider like retired admiral William McRaven, who oversaw the 2011 raid that killed al-Qaida leader Osama bin Laden.

John Coale, a major donor to both Bill and Hillary Clinton, was more blunt. "They don't have anybody who can win the general [election]," he said.

In conversations with 17 state and national party leaders, nearly all expressed some level of unease with where the field stands and a deepening concern that, even as Trump suffers through one of the darkest phases of his presidency, the leading presidential contenders would struggle mightily in a one-on-one contest with him. For all of his challenges, Trump commands a gigantic operation that has vacuumed up unprecedented sums of money, an unparalleled megaphone to lure in voters and a lock on most of the Republican Party. Democrats face the possibility of a long primary fight that could cleave the party along ideological and generational lines, and leave the nominee campaigning against an incumbent who Democrats see as simultaneously weak and hard to beat.

The unpredictable nature of the race so far has contributed to Democrats' unease. Candidates who at first seemed to combine crowd-pleasing star power with center-left appeal, like O'Rourke and Sen. Kamala Harris, D-Calif., faded quickly. Pete Buttigieg, the mayor of South Bend, Indiana, has commanded attention on the debate stage but been unable to appeal to black voters, a concern underscored Tuesday by a leaked memo detailing a focus group of black South Carolina voters who expressed discomfort with him being gay.

Others moderates including a roster of senators and a governor like Sens. Amy Klobuchar of Minnesota, Michael Bennet of Colorado and Gov. Steve Bullock of Montana linger toward the bottom of the polls.

That has helped propel speculation about Hillary Clinton, the 2016 party nominee, although aides say the likelihood of her seeking a rematch with Trump remains slim. Those close to Clinton, speaking on the condition of anonymity because they were not authorized to comment on her behalf, say she has felt vindicated over the past few weeks as Trump's political difficulties have deepened. That sentiment was reinforced this week when the State Department announced its probe into emails sent to a private server, a major complication of her 2016 campaign, found no evidence of deliberate mishandling of classified information by department employees.

"Ultimately, it's unlikely she would do it," said one person who has spoken with her. "But put it this way: It ain't zero. And does she think about it all the time? Absolutely."

Allies have passed around an op-ed that appeared in the San Francisco Chronicle, written by former San Francisco mayor Willie Brown, with the headline, "Who should run against Trump? How about Hillary Clinton?"

Supporters say she has been glued to the Democratic primary contest and has spoken with some frequency with Warren and Biden, among others. Now selling a book written with her daughter, Chelsea, she has been a constant public presence of late, engaging in a days-long spat with Rep. Tulsi Gabbard, D-Hawaii, and repeatedly trolling Trump on his favorite communications platform, Twitter.

A late entrance under any circumstances would be difficult, with Clinton's former aides and fundraising network dispersed among many current campaigns. But her supporters have discussed whether she could helm a slimmed-down campaign operation and whether she would be able to maintain the less cautious, more freewheeling persona she has adopted since her loss in 2016.

"Her view is: I ran against this guy, I know how to do this," said one of those close to her. "She has battle scars to prove it."

The chatter has made it out to the campaign trail. Asked about Clinton by reporters at a Des Moines, Iowa, high school on Monday, Warren parried: "Do you have a question about education?" Asked later what role Clinton should play in 2020, she replied, "I do not have any comment on that."

Views about Clinton vary widely, however, and in part mirror the ideological and generational schisms that have fed the current anxiety. More seasoned leaders who have seen Democrats lose big have tended to prefer a safer, middle-road candidate more palatable to a wide range of voters. Those newer to the process are attracted to the vibrant and passionate candidates who can excite the base.

The push for liberal purity is one that raises warning flags for Rev. Joseph Darby Jr., an influential black pastor in South Carolina. He said he fears a repeat of the "McGovern situation," referring to the 1972 presidential election that pitted liberal Sen. George McGovern against incumbent Republican Richard Nixon.

"The senator was the great white hope," Darby said. "He was the one that everyone went with because he was so wonderfully progressive, and he got his butt beat at the polls. I don't want to see a repeat of that."

"I don't know if it's a lack of hustle or what, but it's a concern," said Darby. "Running for office ain't cheap these days."

Some of the more moderate and lower-polling candidates, like former Maryland congressman John Delaney, fault the Democratic National Committee for creating a system in which candidates who are already well known or have base-pleasing views have a massive advantage.

The party set a high threshold for grass-roots donors that candidates had to meet to make it on the debate stages, an incentive system that he said rewards far-left views.

Moderate candidates lose out if the DNC process trumps the traditional vetting role that voters in Iowa and New Hampshire have long played, he said.

Biden, he said, hasn't offered enough new ideas for younger Democrats to embrace him. And Sanders and Warren, he said, are too far to the left to win.

"You need to run on things that half the country agrees with you," he said.

A key problem with many candidates, particularly the liberal ones, according to nearly all of the party leaders interviewed, is their support for ending the private health insurance industry via a Medicare-for-all plan.

Kamarck, the DNC member, said it's a "trap" in which Warren, in particular, now finds herself stuck.

Warren has been criticized for weeks for refusing to say how she'd fund the massive program, eventually saying Sunday she would release a detailed funding plan in the next few weeks. But the next day she remained uncomfortable discussing Medicare-for-all - insisting five times that reporters should focus on her education plan.

Warren, whose stock has risen more than any other candidate this year, growing steadily as Biden, Sanders and Harris have faltered, also faces a renewed challenge from the left. Her main competition on that front, Sanders, has revived his campaign since suffering a heart attack three weeks ago, posting impressive fundraising numbers and hosting the biggest rally of the election cycle, featuring an endorsement from Rep. Alexandria Ocasio-Cortez, D-N.Y.

As she works to build a national campaign, Warren also has faced criticism from Iowa Democrats concerned about her absences.

"I don't know what her strategy is. I don't know why she's not here, but people have noticed," said Steve Drahozal, the chairman of the Dubuque County Democratic Party, who said he has appealed to the Warren campaign several times for the candidate to visit.

Buttigieg is matching Warren's formidable ground game in Iowa, according to county Democratic chairs. Klobuchar also has increasingly pinned her campaign on a strong showing there.

A USA Today/Suffolk poll this week showed Biden and Warren tied in Iowa, with Buttigieg a few points behind, feeding worry among party leaders that the race could remain unsettled for a long while, as Trump whales on the Democratic field. Coale and others raised the prospect of an undecided convention, which he likened to "a Geraldo show where chairs are flying."

Other seasoned party hands noted that it's normal for Democrats to fret.

"Democrats characterologically worry about everything," said Steven Grossman, a former Democratic Party chairman, who is supporting Buttigieg. "We have that quality and characteristic, but I'm not one of those people. I believe that whoever emerges from the primary process will be battle tested."

The Washington Post’s David Weigel in Washington and Holly Bailey in Des Moines contributed to this report.