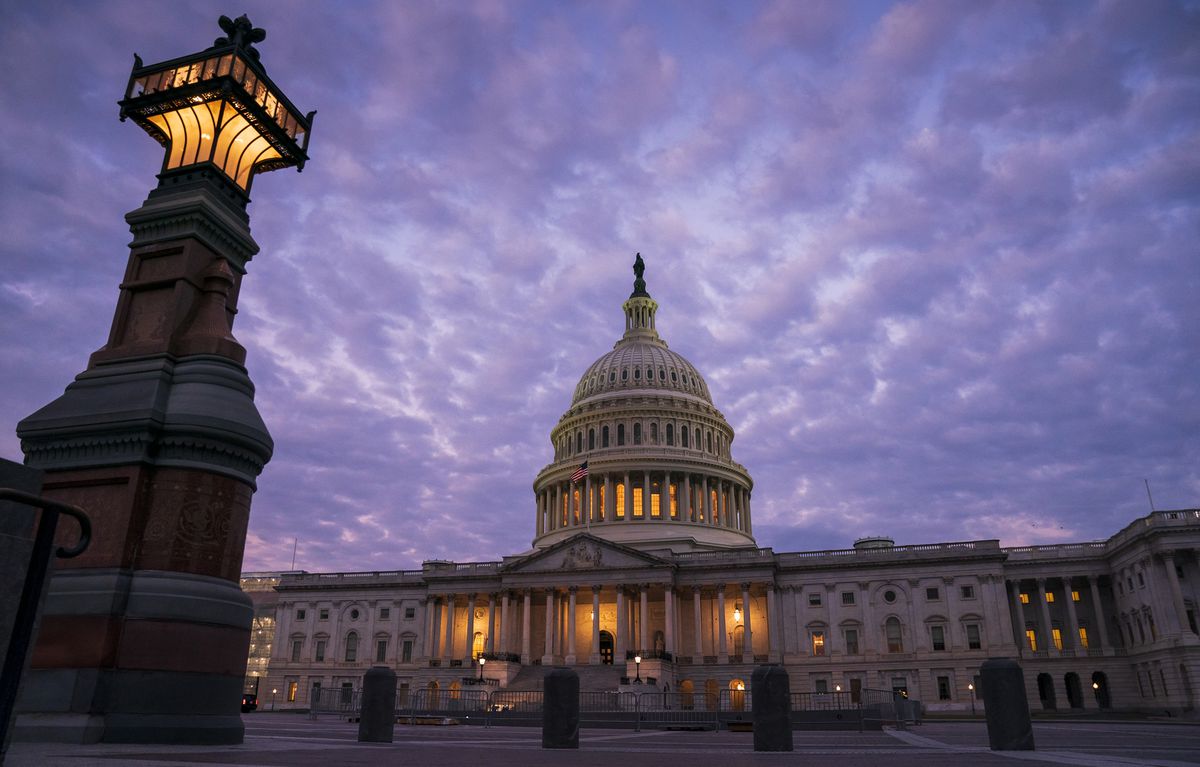 The Capitol in Washington is seen at dawn, Thursday, Oct. 3, 2019. House Democrats are moving quickly on the impeachment probe of President Donald Trump after a whistleblower exposed a July phone call the president had with Ukrainian President Volodymyr Zelenskiy in which Trump pressed for an investigation of political rival Joe Biden and his family. (AP Photo/J. Scott Applewhite)

The Capitol in Washington is seen at dawn, Thursday, Oct. 3, 2019. House Democrats are moving quickly on the impeachment probe of President Donald Trump after a whistleblower exposed a July phone call the president had with Ukrainian President Volodymyr Zelenskiy in which Trump pressed for an investigation of political rival Joe Biden and his family. (AP Photo/J. Scott Applewhite)

WASHINGTON - The whistleblower who initially unmasked President Donald Trump’s effort to pressure Ukraine for political favors has moved steadily toward the periphery of the House impeachment inquiry as several Democrats said Thursday they have ample testimony from senior Trump administration officials to back his claims.

Democrats were once prepared to take extraordinary steps to preserve the whistleblower's identity under questioning, considering him central to their investigation. But over the past month, they have grown cold to the idea of exposing him to additional scrutiny after several witnesses described how Trump leveraged access and military aid to secure a promise from Ukraine to launch investigations that could help his 2020 reelection bid.

"I think it's quite clear we have a surfeit of evidence that corroborates in full every aspect of what happened and the policy they were pursuing," said Rep. Gerald Connolly, D-Va., a member of the Oversight and Foreign Affairs committees.

A person familiar with the discussions between the whistleblower and House investigators, speaking on the condition of anonymity to discuss private talks, said Thursday that there are no active efforts to arrange for the individual's testimony. A spokesman for House Intelligence Committee Chairman Adam Schiff, D-Calif., who is leading the inquiry, declined to comment.

Republicans, meanwhile, have stepped forward to demand the whistleblower’s public testimony, arguing in a letter Wednesday that revealing his identity is necessary “to fully assess the sources and credibility” of the individual - and, impeachment advocates fear, fuel an effort to undermine the probe itself.

"Like every American, I deserve to meet my accuser, especially when this accuser, the so-called 'Whistleblower,' represented a perfect conversation with a foreign leader in a totally inaccurate and fraudulent way," he wrote on Sept. 29.

The Washington Post had identified the whistleblower only as a male CIA officer.

Republicans escalated their condemnation of the House inquiry on Thursday, with Senate Majority Leader Mitch McConnell, R-Ky., and Sen. Lindsey Graham, R-S.C., introducing a resolution assailing the probe as unfair to Trump.

Graham said 44 of the 53 Senate Republicans support his nonbinding resolution.

While some Republicans have been respectful of the whistleblower's right to anonymity, as guaranteed in the statute governing intelligence community complaints and other federal whistleblower statutes, many others have fully embraced Trump's rhetoric.

"I certainly think in American jurisprudence, the ability to cross-examine your accusers is pretty fundamental," Sen. Ron Johnson, R-Wis., chairman of the Senate Homeland Security and Governmental Affairs Committee, said Thursday. "I think that would be important."

Democrats have played down the necessity of the whistleblower's testimony for weeks, starting with the Sept. 25 release of the phone call between Trump and Ukrainian President Volodymyr Zelensky in which Trump asks Zelensky to do him "a favor" by investigating an alleged Ukrainian role in the 2016 election, as well as the role that the son of former vice president Joe Biden played at a Ukrainian gas company.

Schiff said in an Oct. 13 interview on CBS' "Face the Nation" that the whistleblower's testimony "might not be necessary," and several Democrats involved in the investigations said this week that new testimony from key figures - including former Ukrainian Ambassador Marie Yovanovitch, former National Security Council senior director Fiona Hill and William Taylor Jr., the current top U.S. diplomat in Kyiv - all made the whistleblower's testimony even less essential to the probe.

"This is the role that whistleblowers play: Whistleblowers are the people who set off a process by telling the truth," said Rep. Jamie Raskin, D-Md., who has participated in the impeachment inquiry as a member of the Oversight Committee. "The whistleblower will go down in history as a hero for kicking off this process. But the whistleblower is no longer integral to the investigation in any way."

Neither Raskin nor Connolly said they were aware of any final decision not to seek testimony from the whistleblower. A spokesman for Schiff declined to comment.

Mark Zaid, one of the attorneys for the whistleblower, said Thursday that the individual's identity "is completely irrelevant as the complaint is now public and the primary actors at senior levels are being interviewed by members of the House from both political parties."

Whether the whistleblower's complaint should have ever come to Congress at all was a matter of intense dispute. The Justice Department argued that the director of national intelligence was not compelled to forward it to the intelligence committees with laws governing "urgent" matters because it fell outside the jurisdiction of the intelligence community.

In a rare step, the official association of inspectors general wrote back to Justice Department officials on Tuesday, calling the Office of Legal Counsel's September opinion "wrong as a matter of law and policy" and urging it to modify or withdraw it.

"OLC did not find that production to Congress was limited due to a valid constitutional concern. Rather, OLC substituted its judgment and reversed a determination the statute specifically entrusted to the ICIG because of its independence, objectivity, and expertise to credibly assess the information," they wrote in a letter obtained by The Washington Post that was signed by 67 inspectors general.

The inspectors general also said the decision would have a "chilling" effect on whistleblower disclosures and potentially allow agency heads to infringe on their independence.

The House's impeachment investigation has been moving at a breakneck pace since Speaker Nancy Pelosi, D-Calif., launched the probe on Sept. 24. Now, Democrats are moving into the phase where they are hoping to corroborate much of the testimony they have already heard with information from other witnesses who were involved in Ukraine policy.

The panel on Wednesday heard from deputy assistant secretary of defense Laura Cooper, who gave a largely technical accounting of the American military aid program for Ukraine, according to people familiar with the testimony. Cooper offered details that helped to round out the timeline of when various people became aware that the Trump administration had frozen the funds, said the individuals, who spoke on the condition of anonymity to speak frankly.

While Cooper did not testify to personal knowledge of a quid pro quo, people familiar said, her testimony was in keeping with Taylor's account.

On Saturday, the panel will interview acting assistant secretary of state for European and Eurasian affairs Philip Reeker, who, according to Taylor's testimony, was involved in early efforts to secure a meeting between Trump and Zelensky. According to internal documents the State Department's inspector general passed on to Congress earlier this month, Reeker also fielded concerns from other officials, including George Kent, the deputy assistant secretary of state in charge of Ukraine, about the effort to oust Yovanovitch from office.

Two top aides to former national security adviser John Bolton, whom former deputies have described as infuriated that Trump's personal lawyer Rudy Giuliani and acting chief of staff Mick Mulvaney were running a side operation on Ukraine policy, are also expected to testify in the impeachment probe next week, potentially laying the groundwork for an eventual interview with Bolton himself.

Bolton described Giuliani as a "hand grenade," according to people familiar with testimony from Hill, the former National Security Council senior director for Russia and Europe, and wanted it known he was not part of the "drug deal" between Mulvaney and U.S. Ambassador to the European Union Gordon Sondland. Sondland, special U.S. envoy to Ukraine Kurt Volker and Energy Secretary Rick Perry were deputized in late May to take over Ukraine policy in the wake of Yovanovitch's ouster.

Bolton is believed to have confided these sentiments and other concerns to former deputy assistant to the president for national security affairs Charles Kupperman, who is expected to appear in closed session on Monday. Kupperman could also reveal details about the July 25 call between Trump and Zelensky, as he was one of the official listening in on it - and is likely to field questions from lawmakers as to whether there was an effort, as Democrats have alleged, to "cover up" the call by moving it to a more-secure server.

The National Security Council's current senior director for Europe and Russia, Timothy Morrison, whom Bolton also brought into the NSC, is expected to testify next Thursday. Morrison is the person who told Taylor that the Trump administration had directly informed Ukraine "that the security assistance money would not come until President Zelenskyy committed to pursue the Burisma investigation," according to Taylor's opening statement to investigators, referring to the energy company Biden's son worked for and using an alternate transliteration of the Ukrainian president's name.

The White House has already attempted to dismiss some of the testimony witnesses have delivered against Trump as the work of "far-left lawmakers and radical, unelected bureaucrats."

Similarly, when it comes to the whistleblower, Republicans have pointed to an initial assessment by Michael Atkinson, the inspector general of the intelligence community who initially investigated the whistleblower's complaint, that found he has "some indicia of an arguable political bias."

In the letter demanding the whistleblower's testimony, Republicans pointed to other "information that contradicts the employee's allegations" - referencing claims that they suggest subsequent congressional witnesses have not corroborated.

The letter also referenced questions about contact that the whistleblower had with Intelligence Committee Democrats before filing his complaint with Atkinson. Schiff said committee staff received only a vague account from the whistleblower before advising him to hire an attorney and contact the inspector general. He apologized recently for initially saying publicly that Democrats had had no contact with the whistleblower.

Republicans would likely press the whistleblower to detail those interactions should he testify.

"I think it's important that we protect whistleblowers," said Rep. Liz Cheney, R-Wyo., chairwoman of the House Republican Conference. "But I also think that if you're going to go down the path of attempting to impeach the president of the United States, then the Democrats ought to have public hearings."