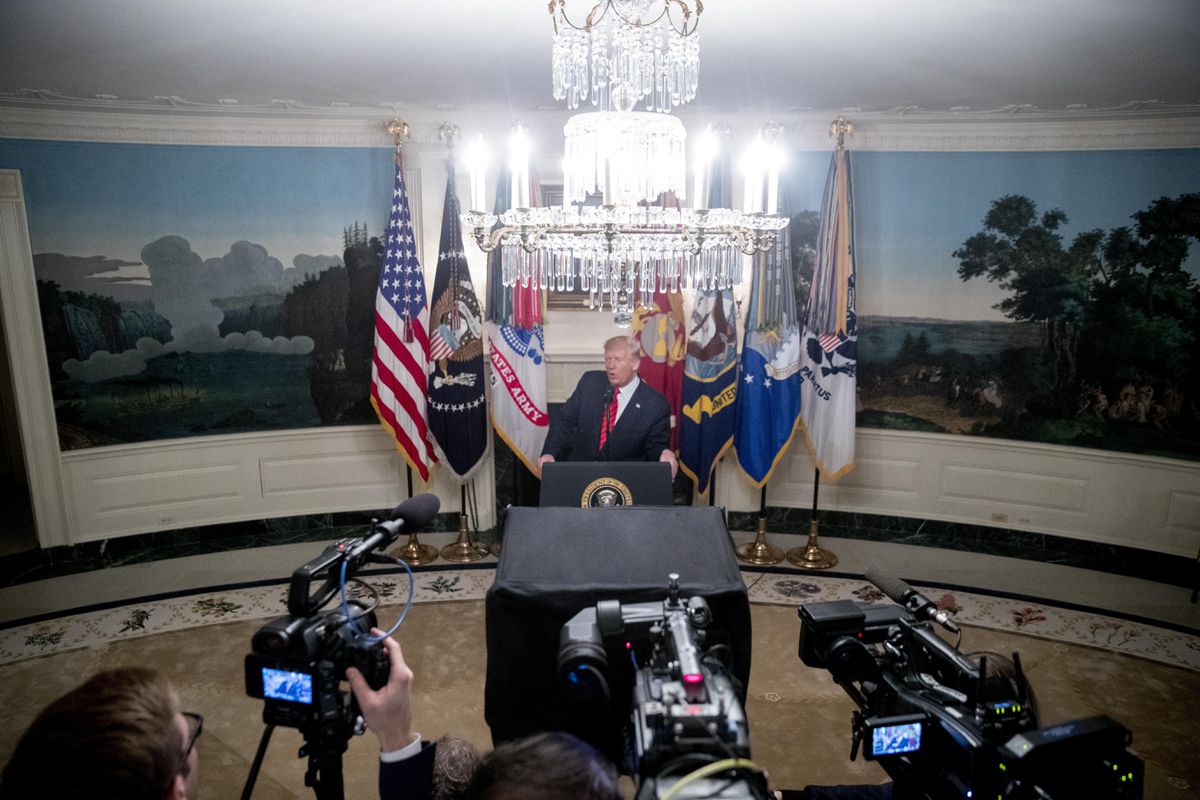 President Donald Trump speaks in the Diplomatic Room of the White House in Washington, Sunday, Oct. 27, 2019, to announce that Islamic State leader Abu Bakr al-Baghdadi has been killed during a US raid in Syria. (AP Photo/Andrew Harnik)

President Donald Trump speaks in the Diplomatic Room of the White House in Washington, Sunday, Oct. 27, 2019, to announce that Islamic State leader Abu Bakr al-Baghdadi has been killed during a US raid in Syria. (AP Photo/Andrew Harnik)

Trump eschewed the serious televised statement his predecessors might have offered. President Barack Obama, for example, said about 1,390 words when announcing the death of Osama bin Laden, and took no questions.

Trump, in contrast, uttered almost 8,000 words and took a dozen questions, offering an unfiltered and, at times, vivid account of the raid.

According to current and former administration officials, the president has complained in recent weeks about not getting enough credit for his accomplishments. On Sunday morning, Trump sought to cast Baghdadi's death - and his role - in historic terms. And he seemed to receive the bipartisan praise he covets at a time when it has proven hard to come by. Even critics, such as Rep. Adam Schiff, D-Calif., lauded the death, though they warned that the president's decision to pull U.S. troops from Syria could spark a revival of the Islamic State.

Sunday's announcement began, as these things often do in the Trump presidency, with an ominous tweet. "Something very big has just happened!" the president said Saturday night, as if he were sharing a "sweeps week"-like promo for a TV show.

He said nothing else. On Sunday, Trump explained that he posted late Saturday so journalists would not be golfing, playing tennis or "indisposed" for his announcement.

He also said he waited for troops to land in a safe zone before tweeting.

Trump strode to the podium in the Diplomatic Room alone about 9:20 a.m. Sunday morning, wearing a red tie.

As a retinue of top aides - sans acting chief of staff Mick Mulvaney - stood nearby, along with Sen. Lindsey Graham, R-S.C., Trump described the raid in surprisingly precise, if unverified, terms.

The leader of the Islamic State, Trump said, died surrounded by American forces in an Idlib tunnel Saturday night, detonating a suicide vest as American forces and dogs circled. The president also said Baghdadi had taken three small children with him into the "dead-end" tunnel, effectively leading them to their deaths.

The president seemed to take particular joy in recounting gruesome, gory details, citing the Islamic State beheadings of Americans in orange jumpsuits and a need to convince others to not join forces.

The president said that Baghdadi's body had been mutilated beyond recognition, and that it took a sophisticated test to prove it was him. He called Baghdadi's followers "losers" and "frightened puppies."

At the news conference, Trump boasted of the quality of the footage. "Like you were watching a movie," he said.

The president demurred when asked whether he could hear the whimpering from his video hookup, a relevant question since Trump has often described people as crying who said they were not. "I don't want to talk about it," he said.

Later, Secretary of Defense Mark Esper was asked if he, too, could hear "whimpering and crying" during the raid.

"I don't have those details," he said. "The president probably had the opportunity to talk to the commanders on the ground."

The president also described a 70-minute military flight in which eight helicopters faced incoming fire from "random people who don't like helicopters," the capture of "highly sensitive" information from the leader's compound and a detailed description of the raid itself.

"If you're a normal person you say knock knock, can I come in," Trump said.

That's not how the Army forces handled Baghdadi, Trump said. Instead, he described in detail how the troops blew the walls out. Before you knew it, he said, there was a "big beautiful hole" where the compound had been.

It was all described in historic terms because there had never been anything like it, the president said, a familiar dynamic for how he has cast his presidency.

"Bin Laden was a big thing, but this is the biggest there is," Trump said. He bemoaned that the military under his tenure had previously not killed "the big names."

Trump said that bin Laden was not as important of a capture because he'd only become well-known after the World Trade Center attacks - and that his predecessors should have done something about him before.

At the news conference, Trump falsely claimed that he predicted a terrorist attack from bin Laden in "The America We Deserve." In the book, Trump vaguely mentions the possibility of a terrorist threat and bin Laden but says nothing specific.

"If you read my book, there's a book just before the World Trade Center came down, and I don't get any credit for this, but that's OK, I never do. But here we are. A very, very successful book," he said. "If they would have listened to me, a lot things would have been different."

The president revealed that he did not tell House Speaker Nancy Pelosi, D-Calif., about the Syrian operation, eschewing typical procedure ahead of major military activities, because he was afraid she would leak details, leading to endangered troops, while adding that he told the Russians "we're coming in."

At one point, he criticized an unnamed journalist he'd seen on TV for not giving him credit for winning a travel-ban case at the Supreme Court.

"Your network is doing a great job," he said to a different reporter from One America News Network, a right-wing network that has actively sought his approval and has won it during his occasional bouts with Fox News.

He boasted of his own prowess on the Internet while favorably comparing himself to the Islamic State leaders and their sophisticated recruitment efforts. "They use the Internet better than almost anybody in the world, perhaps other than Donald Trump," Trump said.

There was mixed messaging about dogs. While he likened Baghdadi's "brutal" death to a "dog," he also lamented that there was a military canine hurt in the operation. "Our canine, I call it a dog, a beautiful dog, a talented dog, was injured and brought back," he said.

He described Osama bin Laden and his son as "very handsome" and "charismatic" before attacking their actions.

He lavished praise on Russia for sharing intelligence and letting the United States fly through its airspace but criticized Europe for being a "disappointment" in not taking Islamic State terrorists. Of all the countries who received Trump's praise, Russia was at the top of the list in the president's remarks.

The president also took a jab at some in the intelligence community, while praising those involved in the effort, saying he'd dealt with "people who aren't very intelligent having to do with intel."

Before he concluded the news conference, he went back to the violence of Baghdadi.

“He was a gutless animal,” Trump said. “Thank you all very much. I appreciate it.”