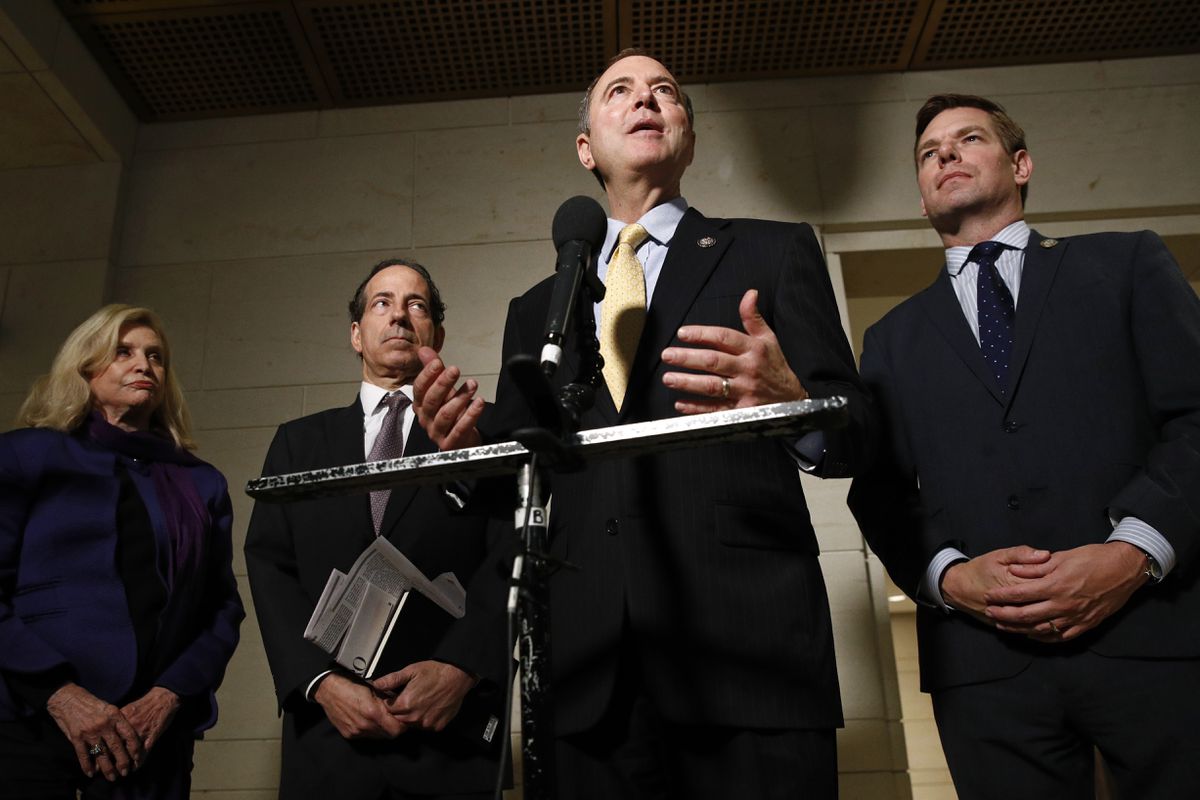 WASHINGTON - House Democrats unveiled new procedures for the impeachment inquiry of President Donald Trump Tuesday, responding to Republican demands for due process by setting out rules for future public hearings delving into whether Trump should be removed from office.

The resolution backed by House Speaker Nancy Pelosi, D-Calif., hands the lead role to the House Intelligence Committee and its chairman, Rep. Adam Schiff, D-Calif., who would have broad latitude to organize extended questioning of potential public witnesses. Two other committees who have so far participated in the closed-door investigation into Trump's dealings with Ukraine - Foreign Affairs, and Oversight and Reform - would not be permitted to directly participate in the open proceedings under the legislation.

It also sets out for the first time the ability of House Republicans to make their own requests for testimony and documents, though those requests will ultimately be subject to a vote of the Democratic-majority committee - a practice that matches the minority powers in the 1998 impeachment of President Bill Clinton.

Lawmakers are expected to vote on the measure Thursday, according to multiple Democratic aides who were not authorized to comment publicly. The House Rules Committee will debate and potentially amend the measure at a panel meeting Wednesday afternoon.

Rules Committee Chairman Jim McGovern, D-Mass., said Tuesday the resolution "outlines the next steps in this inquiry, including establishing the procedure for public-facing hearings conducted by the Intelligence Committee and the process for transferring evidence to the Judiciary Committee once they are completed."

"The president's Republican allies in Congress have tried to hide the president's conduct, but the American people will now see the facts firsthand," he said.

Speaking ahead of the resolution's release Tuesday, House Republican leaders blasted the Democratic tactics, arguing that the impeachment process was fatally flawed from the beginning and cannot be redeemed with the adoption of new procedures.

"You can't put the genie back in the bottle," said House Minority Leader Kevin McCarthy, R-Calif. "Due process starts from the beginning."

The drafting of the procedures took place among a tight circle of close Pelosi confidants, leaving rank-and-file lawmakers and even some top Democratic leaders in the dark.

Addressing reporters Tuesday morning, House Majority Leader Steny Hoyer, D-Md., said he had not yet scheduled a vote on the resolution - contradicting Pelosi, who pledged to hold a vote this week.

Pelosi announced plans to vote on the resolution in a letter to Democratic members Monday, and, according to three House aides who spoke on the condition of anonymity to describe private discussions, she has kept a tight leash on the process of drafting the measure - excluding Hoyer and other leaders.

Besides setting out procedures for public hearings in the Intelligence Committee, the resolution would also authorize that panel and other committees investigating Trump to transfer their investigative materials to the House Judiciary Committee, which is expected to draft articles of impeachment based on the other panel's findings.

The Judiciary Committee would also have the power to hold public hearings of its own under similar procedures to those given to the Intelligence Committee.

Under the resolution, both panels could engage in extended questioning of witnesses in rounds of up to 90 minutes before beginning the traditional five-minute rounds extended to panel members under existing rules. Both lawmakers and staff would be authorized to question witnesses.

Republicans have raised questions about Trump's right to be personally represented by counsel during the impeachment proceedings, noting that Clinton had lawyers present during Judiciary Committee's consideration of articles in 1998. Two Democratic aides said those rights would be handled similarly to the Clinton impeachment and set out separately in Judiciary Committee rules.

Democratic leaders have been careful not to characterize the measure as authorizing the impeachment inquiry, something they say has been underway already for weeks without a House vote.

"We have an inquiry looking at whether articles of impeachment are justified by the facts," Hoyer said. "We've been doing that. We are doing it. We're going to continue to do it. This is about process as to when we move to out of the investigatory phase, which we've been in, into a phase where we have public hearings. That's what it is. No more. No less."

Several Democrats said Tuesday they believed the vote would undermine Republicans, who for weeks have raised objections to the process Democrats have undertaken and have called for a formal vote on launching impeachment proceedings.

"The message this week is going to be: You asked for it, you got it," said Rep. Bonnie Watson Coleman, D-N.J.

Several members who attended a caucus meeting held at the Democratic National Committee Tuesday morning said they were ready to vote to formalize the next step in the impeachment investigation - including some in swing districts where the vote could be a political liability.

"I have no qualms about taking a vote," said Rep. Abigail Spanberger, D-Va., a freshman running in a district Trump previously won by 7 points. "We've been clearly in an impeachment inquiry, and laying out the plans for the next step, I think, is a helpful thing to do for the American people to understand the parameters of the public hearings."

Rep. Ron Kind, D-Wis., a veteran lawmaker whose district voted for Trump by 5 points in 2016, also said he planned to support the measure: "We fully support a thorough investigation and we're going to continue doing what we're doing."

But at least one Democrat has said he planned to vote no, citing the upcoming presidential election.

“It’s not that I’m friends with the president. It’s not that I believe he should be protected. I don’t mind if he’s investigated,” said Rep. Jeff Van Drew, D-N.J. “But what going to happen in my mind, it’s going to happen here in the House; it will go over to the Senate and then he will believe that he has been exonerated. He will still be the president, and he will still be the candidate - a candidate who has been exonerated by the Senate.”