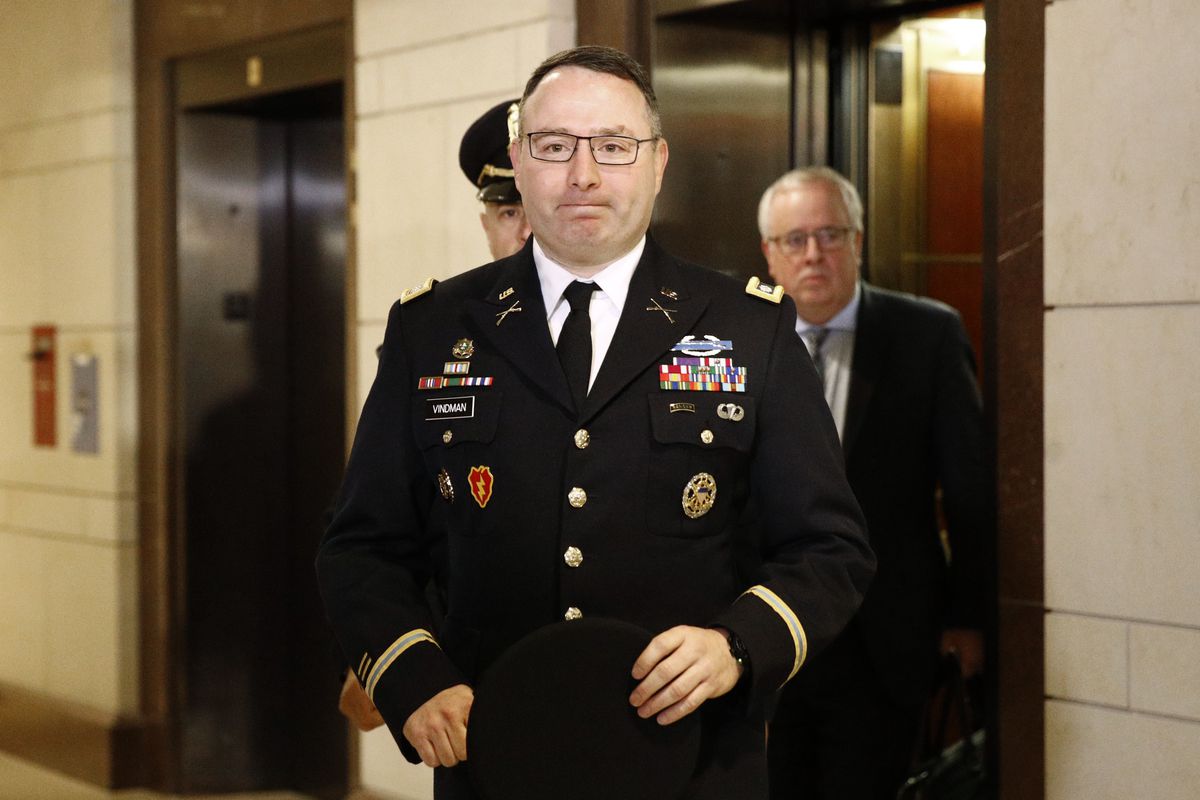 Army Lieutenant Colonel Alexander Vindman, a military officer at the National Security Council, center, arrives on Capitol Hill in Washington, Tuesday, Oct. 29, 2019, to appear before a House Committee on Foreign Affairs, Permanent Select Committee on Intelligence, and Committee on Oversight and Reform joint interview with the transcript to be part of the impeachment inquiry into President Donald Trump.(AP Photo/Patrick Semansky)

Army Lieutenant Colonel Alexander Vindman, a military officer at the National Security Council, center, arrives on Capitol Hill in Washington, Tuesday, Oct. 29, 2019, to appear before a House Committee on Foreign Affairs, Permanent Select Committee on Intelligence, and Committee on Oversight and Reform joint interview with the transcript to be part of the impeachment inquiry into President Donald Trump.(AP Photo/Patrick Semansky)

WASHINGTON - A top National Security Council official on Tuesday delivered a firsthand account of President Donald Trump pressuring Ukraine to investigate his political rivals, putting congressional Republicans in a bind and emboldening Democrats as they moved toward their first impeachment vote Thursday.

Trump and his allies on TV lashed out at Lt. Col. Alexander Vindman, who said his concerns about what he heard in Trump's July 25 call with Ukrainian President Volodymyr Zelensky drove him to notify his superiors. Trump dismissed Vindman as a "Never Trumper," while some of his allies questioned the patriotism of the Army combat veteran because his family emigrated from the Soviet Union when he was 3.

Trump’s attack on the Purple Heart recipient unnerved Republicans in Congress, with several pushing back, albeit without naming the president. Sen. Mitt Romney, R-Utah, called the offensive “misplaced and very unfortunate,” and said he had “full confidence” in Vindman “as an individual and his patriotism.”

The response from Trump's party created an unusual dynamic in which Republicans were defending a man who was simultaneously accusing the president of undermining national security for his own political purposes. Privately, several Republicans found Vindman's testimony to be damaging and lamented that once again they were forced to defend the president.

The GOP reaction to Vindman comes as the party faces frontal attacks on two of its major talking points in Trump's defense. Vindman's account of the phone call deprives Republicans of the complaint that the witnesses called by Democrats have relied on hearsay when discussing the president's interactions with Zelensky. And as Democrats moved to vote on a resolution to hold open hearings on impeachment, Republicans faced the prospect of losing their complaint that the inquiry is being conducted in secret.

The resolution, set to come before the full House on Thursday, would empower Intelligence Committee Chairman Adam Schiff, D-Calif., to take the lead on public hearings. It would also enable House Republicans for the first time to make requests before Schiff's committee for testimony and documents - a practice that matches the minority-party powers in the 1998 impeachment of President Bill Clinton.

Republicans have raised questions about Trump's right to be personally represented by attorneys during the impeachment proceedings, noting that Clinton had lawyers present during the House Judiciary Committee's consideration of articles of impeachment in 1998. The committee on Tuesday issued a three-page summary of procedural safeguards for the president. They include the right of the president or his counsel to recommend additional testimony or evidence for the committee's review and to question any witnesses who testify, among other provisions.

Several Democrats said they believed the vote would undermine Republicans, who for weeks have raised objections to the process Democrats have undertaken and have called for a formal vote on launching impeachment proceedings.

"The message this week is going to be: You asked for it, you got it," said Rep. Bonnie Watson Coleman, D-N.J.

Across the Capitol, Senate Democrats plotted their own offensive on Trump and his dealings with Ukraine. They planned to use a Senate Foreign Relations Committee confirmation hearing on Wednesday to press Deputy Secretary of State John Sullivan on why he recalled the former ambassador to Ukraine, Marie Yovanovitch. Sullivan has been nominated to be U.S. ambassador to Russia.

Democrats want to question Sullivan about his treatment of Yovanovitch, who was the target of a smear campaign by Trump allies because she did not subscribe to conspiracy theories about Ukrainian efforts to undermine Trump in the 2016 election.

In the House, impeachment investigators are readying for a marathon session Wednesday, when they'll hear from two Ukraine specialists in the administration - the State Department's Catherine Croft and Christopher Anderson. But on Tuesday, Democrats were eager to question one more Trump administration official worried about the president's move to leverage foreign policy on a promise to investigate former vice president Joe Biden and his son.

In his testimony over more than 10 hours, Vindman said he was listening in on the summertime call between Trump and Zelensky from the Situation Room, along with other NSC officials and members of Vice President Mike Pence's office.

Vindman said he was so worried about Trump's request that Zelensky investigate his political foes that he reported it to the NSC's lead counsel, just as others at the NSC did at the direction of John Bolton, the former national security adviser who found the Ukraine pressure unsavory.

"I did not think it was proper to demand that a foreign government investigate a U.S. citizen, and I was worried about the implications for the U.S. government's support of Ukraine," Vindman told lawmakers. "I realized that if Ukraine pursued an investigation into the Bidens and Burisma, it would likely be interpreted as a partisan play which would undoubtedly result in Ukraine losing the bipartisan support it has thus far maintained. This would all undermine U.S. national security."

Vindman also testified that the rough transcript of the July 25 call released by the White House is slightly different than what he remembers transpiring. For example, Vindman recalled Zelensky specifically referencing the Ukrainian natural gas firm Burisma when Trump pushed him to investigate a company related to Biden's son Hunter, who had served on its board. Vindman also remembers Trump going on about how Joe Biden was on tape boasting about Ukraine funds - most likely referring to comments Biden made in January 2018 that the United States held up $1 billion in loan guarantees until the nation fired a corrupt former prosecutor, Victor Shokin.

Asked about Vindman's testimony, congressional Republicans squirmed, tried to disagree politely or flat-out dodged. House Minority Leader Kevin McCarthy, R-Calif., said that while he thanks Vindman for his service, "he is wrong."

"We have differences of opinion, but more importantly, we have a rule of law. . . . Nothing in that phone call is impeachable," McCarthy said, later adding: "I do not question this man's service to the country, but you know what, people have different philosophical beliefs."

Democrats described the testimony of Vindman and others as crucial in the abuse-of-office case.

"I think the big picture here is, we've talked to a lot of people who are firsthand, direct participants in various aspects of the story. And with every new witness, it becomes harder to deny the facts, and it's become more embarrassing to the president's conduct because it reaffirms the central details" of a quid pro quo, said Rep. Tom Malinowski, D-N.J., an Intelligence Committee member.

"Supposedly, according to the Corrupt Media, the Ukraine call 'concerned' today's Never Trumper witness. Was he on the same call that I was? Can't be possible!" Trump wrote hours after Fox News' Laura Ingraham suggested Vindman was a double agent. "Please ask him to read the Transcript of the call. Witch Hunt!"

Republicans rejected the attacks on the Iraq War veteran who has served as a military officer and diplomat for over two decades under Democrats and Republicans.

"I don't at all question his patriotism. I respect his service. He's a Purple Heart, and I think it'd be a mistake to attack his patriotism," said Sen. John Thune of South Dakota, the No. 2 Republican in the Senate.

Sen. Ron Johnson, R-Wis., who oversees Eurasia affairs on the Foreign Relations Committee and traveled with Vindman to Ukraine for Zelensky's inauguration in May, said "anybody that served this nation and put themselves at risk is a patriot in my book."

Rep. Liz Cheney, R-Wyo., the No. 3 House Republican and a fiery defender of the president, opened a Tuesday GOP news conference calling such comments "shameful" and beneath the dignity of Republicans.

"I think that we need to show that we are better than that as a nation," Cheney said. "We're talking about decorated veterans who have served this nation, who have put their lives on the line. And it is shameful to question their patriotism, their love of this nation, and we should not be involved in that process. . . . We don't do that as Republicans."

Other Republicans were more disturbed by what Vindman described in his testimony. Sen. Rob Portman, R-Ohio, an advocate for Ukraine, said, "I thought it was inappropriate for the president to ask a foreign government to investigate a political opponent." But Portman also added: "I also do not think it's an impeachable offense."

While Republicans were forced to answer for Trump, House Democratic leaders worked behind closed doors to ensure their members easily deliver the votes for passage of the resolution.

It didn't appear that Democrats would have problems garnering the votes despite near-unified Republican opposition. Even moderate Democrats from conservative districts, such as Rep. Abigail Spanberger, D-Va., were on board. "I have no qualms about taking a vote," she said.

"We've been clearly in an impeachment inquiry, and laying out the plans for the next step, I think, is a helpful thing to do for the American people to understand the parameters of the public hearings," said the freshman, who is seeking reelection in a district Trump won by seven percentage points in 2016.

Rep. Ron Kind, D-Wis., a veteran lawmaker whose district voted for Trump by five points, also said he planned to support the measure: "We fully support a thorough investigation, and we're going to continue doing what we're doing."

But at least one Democrat said he planned to vote no, citing the upcoming presidential election.