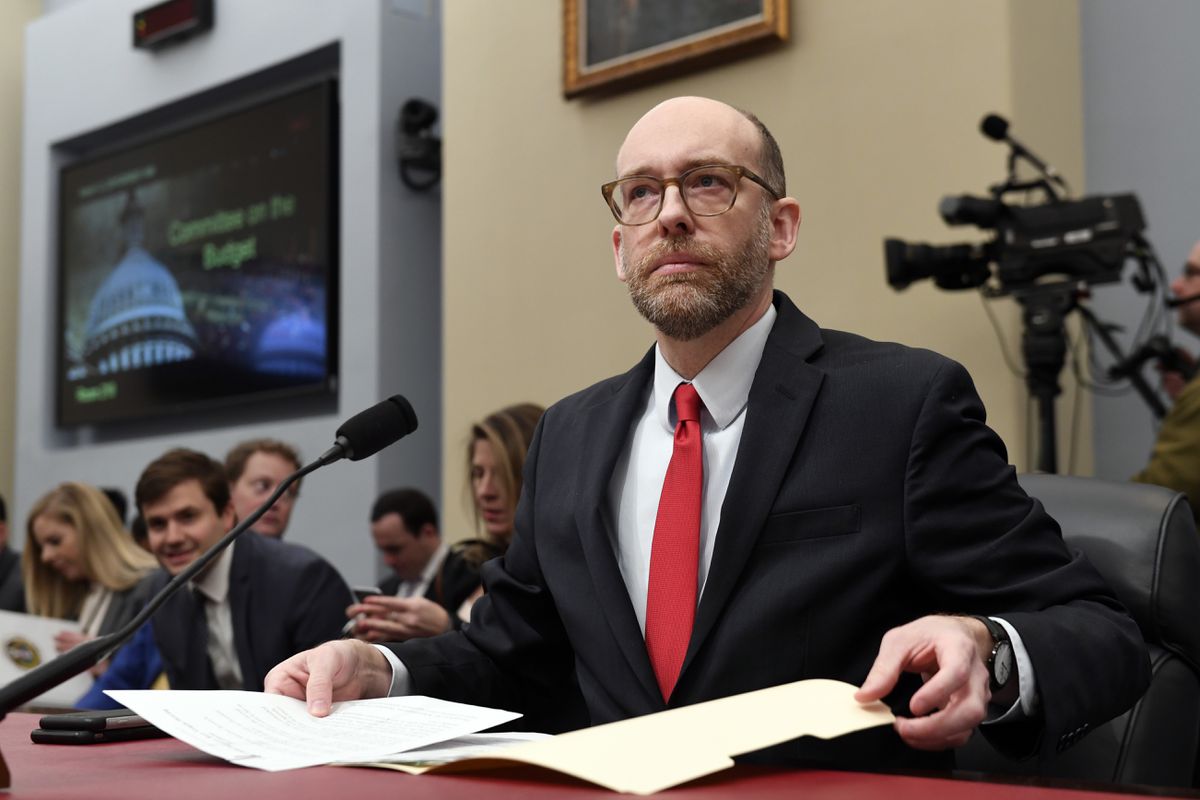 Office of Management and Budget Acting Director Russell Vought testifies before the House Budget Committee on Capitol Hill in Washington, Tuesday, March 12, 2019, during a hearing on the fiscal year 2020 budget. (AP Photo/Susan Walsh)

Office of Management and Budget Acting Director Russell Vought testifies before the House Budget Committee on Capitol Hill in Washington, Tuesday, March 12, 2019, during a hearing on the fiscal year 2020 budget. (AP Photo/Susan Walsh)

One of acting chief of staff Mick Mulvaney’s top allies is preparing to deliver what President Donald Trump wants but has failed to achieve so far in the impeachment inquiry: unquestioning loyalty from administration staff.

Russell Vought, a Mulvaney protege who leads the White House Office of Management and Budget, intends a concerted defiance of congressional subpoenas in coming days, and two of his subordinates will follow suit - simultaneously proving their loyalty to the president and a creating a potentially critical firewall regarding the alleged use of foreign aid to elicit political favors from a U.S. ally.

OMB is at the nexus of the impeachment inquiry because Democrats are pressing for details about why the White House budget office effectively froze the Ukraine funds that Congress had already appropriated.

Congressional Republicans are also predicting that Mulvaney's deputy, Robert Blair, will refuse to show for his scheduled Monday appearance before impeachment investigators - though a White House spokesman and Blair's attorney, Whit Ellerman, did not respond to questions about his plans. Blair was on the July 25 phone call when Trump asked Ukraine's president for a "favor" investigating former vice president Joe Biden, a 2020 presidential contender.

The anticipated defiance toward impeachment investigators comes as Trump has grown enraged that so many of "his employees," as he refers to them, are going to Capitol Hill and testifying, said a person who regularly talks with him and who spoke on the condition of anonymity. The president has asked for copies of witness statements so he can decide how to criticize them, complained that his lawyers are not doing enough to stop people from talking, and even encouraged members of Congress to question the credibility of people working in his own administration, current and former officials said.

"He is the war room," press secretary Stephanie Grisham said on Fox News.

This article is based on interviews with administration officials and congressional aides, many of whom spoke on the condition of anonymity because they were not authorized to discuss the White House's approach to the impeachment inquiry.

Vought, who serves in an acting capacity in the job Mulvaney once held, has sought to build a relationship with the president for some time and sees standing firm against the impeachment inquiry as a way to bolster it, according to two White House officials. Like Trump, the longtime conservative warrior has derided the impeachment inquiry as a "sham process" and has said he will not comply with the subpoena to appear for a deposition this coming Wednesday. Vought shares the president's disdain of foreign aid and has sought to cut it in previous budgets.

Trump has at times questioned the loyalty of Mulvaney's aides, but OMB officials have assured the president they will not show up and help the Democrats' probe, two officials said, pleasing the president.

Vought's move to stonewall Congress follows a string of National Security Council and State Department witnesses testifying that the president tried to withhold nearly $400 million in security aid for Ukraine unless that country would launch politically charged investigations that could benefit him. Vought, Blair and the other two OMB officials called to testify could shed more light on those decisions and the process.

Although OMB officials were not the ones calling the shots about how to handle the military aid, it was their responsibility to implement those decisions and to release the aid -- or hold it up -- as directed. Their testimony could fill in important details about the decision-making process around the money.

"We know from the president that he wanted the Ukrainians to do these investigations, and we know that aid was being withheld when he was asking the Ukrainians," said Rep. Eric Swalwell, D-Calif., an impeachment investigator. "You still have to connect all the dots ... They're dot-connecting witnesses."

Vought was immediately told of the president's decision to scuttle the aid and agreed with some other top advisers that it was legal, two administration officials said. Michael Duffey, one of Vought's subordinates who has also been called to testify on Tuesday and who controls foreign aid decisions in the OMB, signed the OMB document freezing the Ukraine aid, according to two administration officials. Duffey is OMB's associate director for national security programs.

An agency spokeswoman said its officials are simply abiding by the White House's directive, which is that the impeachment inquiry is illegitimate and the administration is not cooperating.

"The idea that OMB's posture is informed by anything other than respecting the prerogatives of the president is absurd," said OMB spokeswoman Rachel Semmel.

Trump suggested on Sunday that he could continue exerting his prerogative over the OMB when he told a reporter that he wouldn't rule out directing another government shutdown later this month if negotiations with Democrats don't lead to the results he wants.

The expected defiance from Mulvaney's allies could bolster the standing of the acting chief, whose job has been a constant source of speculation. In an interview with The Washington Examiner last week, Trump seemed to sympathize with Senate Republicans' annoyance at Mulvaney and refused to weigh in on whether he was "happy" with Mulvaney's performance. He continues to complain about him, advisers say, but is unlikely to immediately replace him at this time.

"Happy?" he asked in response to a question from the Examiner. "I don't want to comment on it."

The OMB officials' refusal to cooperate with the impeachment inquiry will mark a significant break from the trend of the past four weeks, when House Democrats have had success convincing a parade of current and former administration officials to testify about their concerns regarding Trump's use of foreign policy for political gain. Those officials have come forward despite orders from Secretary of State Mike Pompeo and White House counsel Pat Cipollone to ignore impeachment summons.

The OMB's posture could complicate Democrats' investigation, keeping them from learning more details about alleged moves to link aid to Ukraine with Trump's pressure on the nation. Democrats argued, however, that it might not matter in the long run, as they already have two witnesses testifying that the money hinged on the Biden investigations.

"In my view it would be useful to hear from them, but not essential," said Rep. David Cicilline, D-R.I., an impeachment investigator.

The decision to ignore a congressional subpoena comes with risk. House Democrats could hold Vought and his aides in contempt of Congress or take them to court to try to compel their testimony, as the party has done for former White House counsel Donald McGahn. Democrats have said they will not wait on the courts before they proceed with their impeachment inquiry, but by suing Trump officials now, they could force testimony next year, shortly before the presidential election.

Beyond Vought, Blair and Duffey, impeachment investigators have summoned Brian McCormack, OMB associate director for natural resources, energy and science, to appear on Monday. A relative newcomer to OMB, McCormack served until recently as chief of staff to Energy Secretary Rick Perry.

Investigators believe McCormack could potentially provide details about Perry's role in the Ukraine controversy since his former boss was intricately involved in the shadow policy surrounding Ukraine, according to witnesses testimony. Democrats have also subpoenaed Perry, who has said publicly he will not cooperate.

Blair's closeness with Mulvaney - and professional past - has intrigued Democrats in particular. He served as associate director for national security programs at OMB - the position now held by Duffey - before he followed Mulvaney to the White House in January to become Mulvaney's senior adviser.

But Blair also spent roughly 14 years as a staffer in the House of Representatives, working on a panel known for its bipartisanship, the Appropriations Committee. Blair's role as a longtime committee staffer put him in conflict with Mulvaney when Mulvaney served in the House as a leader of the conservative Freedom Caucus that constantly opposed spending legislation needed to keep the government open.

With the Appropriations Committee under new leadership at the start of the Trump administration, Blair was looking for a new job and chose to join the OMB in March of 2017 under Mulvaney's leadership, according to two former congressional staffers who knew him well.

Blair's longtime service on the Appropriations Committee would also give him a unique perspective on Trump's decision to delay aid to Ukraine that had been appropriated by Congress, by the very committee he served for so long. The former staffers, who spoke on the condition of anonymity to discuss private relationships, described Blair as a consummate public servant who knew defense issues inside and out and would have hoped to preserve the government's traditional commitments on those issues in transitioning to the Trump administration.

Both former staffers who knew Blair said he is not a partisan. One of them said that his highly professional approach was “the antithesis to much of this administration” but, as such, he could “help protect the administration from making very dangerous decisions.”