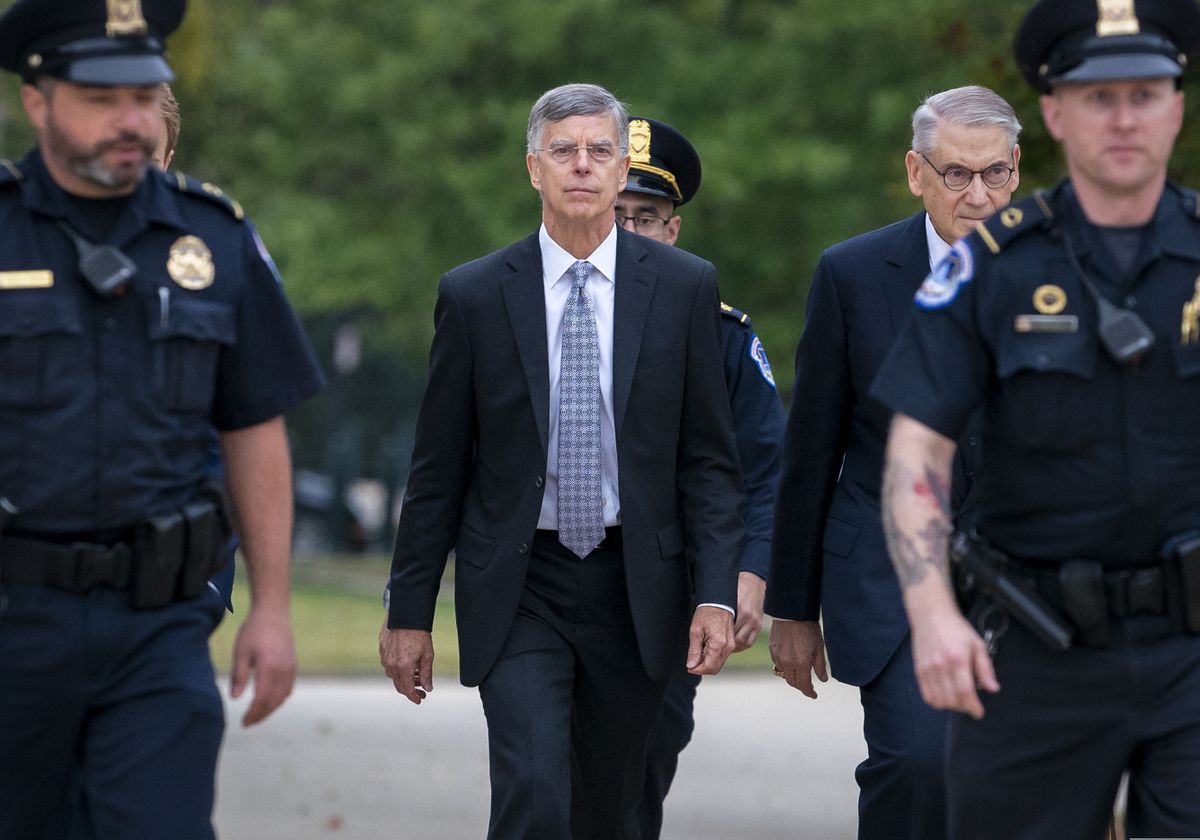 Ambassador William Taylor, is escorted by U.S. Capitol Police as he arrives to testify before House committees as part of the Democrats' impeachment investigation of President Donald Trump, at the Capitol in Washington, Tuesday, Oct. 22, 2019. (AP Photo/J. Scott Applewhite)

Ambassador William Taylor, is escorted by U.S. Capitol Police as he arrives to testify before House committees as part of the Democrats' impeachment investigation of President Donald Trump, at the Capitol in Washington, Tuesday, Oct. 22, 2019. (AP Photo/J. Scott Applewhite)

WASHINGTON - House investigators released a transcript Wednesday of the closed-door testimony of William Taylor, the acting ambassador to Ukraine, who told lawmakers that it was his “clear understanding” that U.S. military aid would not be sent until that country pursued investigations that could politically benefit President Donald Trump.

The impeachment inquiry moved forward on other fronts, with House Democrats announcing that the first public hearings would be held next week and David Hale, the State Department's third-ranking official, testifying privately at the Capitol on Wednesday.

Democrats hope Hale can shed more light on the removal of Marie Yovanovitch as U.S. ambassador to Ukraine after she became the target of false rumors questioning her loyalty to Trump.

Meanwhile, lawmakers continued to spar over the significance of revised testimony by Gordon Sondland, the U.S. ambassador to the European Union. He corroborated Taylor's account that Ukraine was told U.S. military assistance would resume only if investigations that could be damaging to former vice president Joe Biden commenced.

At the end of his testimony, Taylor was able to connect the request for a Biden investigation to Rudy Giuliani - but not to the president directly.

Under questioning from Rep. Lee Zeldin, R-N.Y., Taylor conceded he didn't "know what was in the president's mind."

"What I know," he said, "is that the direction was coming from Giuliani."

Giuliani, of course, is the president's personal lawyer, and a request from him would surely be seen as having the blessing, at least, of the president.

Taylor also conceded he had not spoken directly with Trump or Giuliani about the matter, only two other diplomats, Volker and Sondland.

"The State Department operations center agreed," Taylor said in closed-door testimony. "In response to his request, they said, we won't monitor and will not - and we certainly won't transcribe because we're going to sign off."

Under normal circumstances, those staff members would have stayed on the line during a phone call with a head of state to transcribe and take notes for the official record, Taylor said.

The ambassador testified that Sondland also told him about a change in the time of the call and said he believed Sondland's staff was not aware of it.

"I asked him something like, shouldn't we let everybody else know who's supposed to be on this call? And the answer was, don't worry about it," Taylor said.

"This suggested to me that the normal channel, where you would have staff on the phone call, was being cut out.

"The testimony of Ambassador Taylor - a West Point graduate, Vietnam veteran, and nonpartisan diplomat - shows how President Trump withheld military aid to Ukraine and conditioned its release, as well as a vital White House meeting, on the President of Ukraine publicly announcing investigations into debunked conspiracy theories involving the Bidens and the 2016 election," the three Democrats leading the impeachment inquiry said in a joint statement.

They argued that Taylor's testimony shows how a "shadow foreign policy channel" pursued by Giuliani, along with Sondland and Volker, "placed immense pressure on the Ukrainian government to accomplish the President's goal."

"Ambassador Taylor makes clear why this military aid and continued bipartisan support for Ukraine are so critically important - and why these efforts to undermine U.S. foreign policy for domestic political reasons were so damaging," the statement said.

The Intelligence Committee will hold the first open hearings of the Democratic-led impeachment inquiry next week, with three diplomats who've provided key closed-door testimony in the Ukraine controversy set to appear.

On Nov. 13, Taylor and George Kent, the deputy assistant secretary of state responsible for Ukraine, will testify, Schiff announced in a tweet.

On Nov. 15, Yovanovitch will testify, he added.

The House Democrats' decision to put forward Yovanovitch, Taylor and Kent as their first public witnesses demonstrates a preference for career Foreign Service officers with deep subject matter expertise in Ukraine and experience working under both Republicans and Democratic presidents.

In each of their testimony, the three diplomats displayed a mastery of Ukrainian politics and a warning about the untrustworthiness of the ex-Ukrainian officials Giuliani relied on to peddle conspiracy theories about Ukraine's involvement in the 2016 election and the actions of Biden.

Taylor, in particular, testified that Sondland said U.S. security assistance to Ukraine was dependent on Ukraine announcing investigations that Trump desired. That claim of a quid pro quo initially contradicted Sondland's testimony, but this week, Sondland said he misremembered events, and confirmed the accuracy of Taylor's account.

While the three diplomats boast years of service under the leadership of both parties, they did not have as close of a view of senior-level decision-making as other officials, such as national security adviser John Bolton, a fact Republicans are likely to bring up.

The White House has already objected to the testimony provided by the three diplomats, calling them "radical unelected bureaucrats."

At the White House, Kellyanne Conway told reporters that acting chief of staff Mick Mulvaney will not appear before House investigators Friday for a requested deposition.

"I'm told no," the White House counselor told reporters when asked if Mulvaney plans to appear.

"Why would we try to be complicit in an impeachment inquiry that we're not even sure what it's about?" Conway said. "What is it about? If I gave you a blank piece of paper, literally, what would you write on it? What are we telling the American people, right here right now, as to why we're impeaching the president?"

In a letter Tuesday, House investigators said they are interested in Mulvaney's involvement in an effort by Trump, his personal lawyer Rudy Giuliani and others to withhold a White House meeting from the Ukrainian president and nearly $400 million in U.S. military aid at a time when Trump was pressing investigations that could benefit him politically.

“That is the White House’s position, and I don’t think that his latest revisions change that,” Conway said. “As far as I can see, Ambassador Sondland said that he ‘presumed’ - and last week we had a witness who said ‘my interpretation was.’ Ladies and gentleman, be careful, because you cannot impeach a president and remove him from office in a constitutional democracy . . . based on somebody saying they presumed and someone else saying they interpreted.”