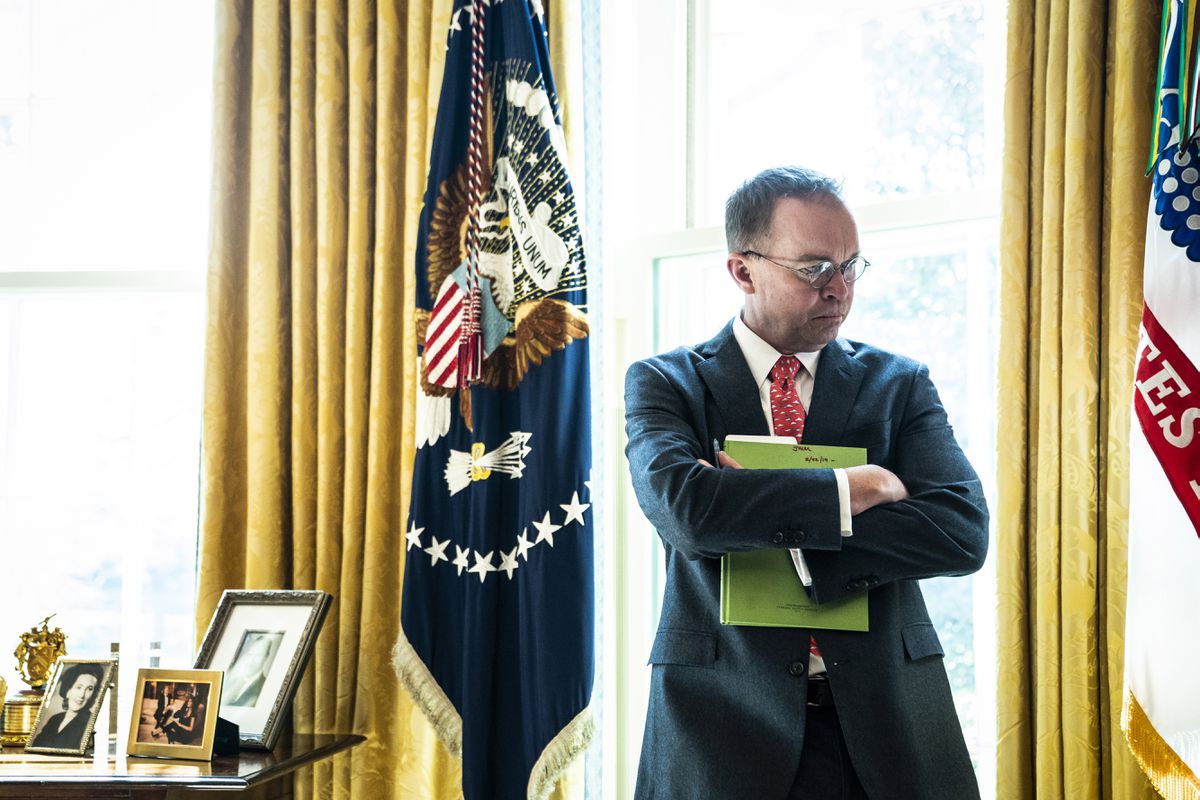 White House acting chief of staff Mick Mulvaney’s last-minute effort to join a lawsuit that could determine whether senior administration officials testify in the impeachment inquiry was an unwelcome surprise to former top national security aides, highlighting internal divisions among President Donald Trump’s advisers in the face of the probe.

Former national security adviser John Bolton's advisers and allies were taken aback to learn late Friday that Mulvaney had gone to court seeking to join a separation-of-powers lawsuit filed against Trump and the House leadership, according to people familiar with their views, who spoke on the condition of anonymity because of the ongoing inquiry.

The suit was filed by Bolton's former deputy, Charles Kupperman, who is asking a federal judge to determine whether a congressional subpoena takes precedent over a White House order not to comply with the inquiry. Bolton is willing to testify if the judge rules in favor of the House, The Washingon Post previously reported.

People close to Bolton and Kupperman said the two were flabbergasted by Mulvaney's surprise request to join the lawsuit because they and others on the national security team considered Mulvaney a critical player in the effort to get the Ukrainian government to pursue investigations into Trump's political opponents.

Bolton views Mulvaney as a key participant in the pressure campaign, a situation that the then-national security adviser referred to derisively as "a drug deal," according to congressional testimony by his aides. The two men were barely on speaking terms when Bolton left his post in September, according to White House officials.

Charles Cooper, a lawyer for Bolton, declined to comment on Mulvaney's effort to join the suit, saying only, "We will provide our answer in court."

William Pittard, an attorney for Mulvaney, said the chief of staff is simply seeking to resolve the competing demands of two branches of government.

"As acting chief of staff, Mr. Mulvaney intends to follow any lawful order of the president and has no reason to think that the order at issue is unlawful - other than the fact the House has threatened him with charges of contempt and obstruction for following it," Pittard said.

Lawrence Tribe, a constitutional law expert at Harvard Law School, said Mulvaney's last-minute move could be an attempt to give himself legal cover to put off the House demand. By attaching himself to the Kupperman case, Mulvaney could avoid having to testify in the House inquiry for months if the suit is appealed all the way to the Supreme Court.

"I think he's trying to be shielded from having to obey his legal duty to comply with an obviously valid subpoena," Tribe said.

Bolton and Mulvaney are key potential witnesses in the House impeachment inquiry, but have so far refused to comply with requests to testify because of the White House claims that senior advisers have "absolute immunity" from cooperating with the congressional probe.

Trump has repeatedly urged aides not to cooperate and was a key writer of a lengthy White House letter that decried the process, officials said.

Mulvaney had previously signaled he would follow the president's direction and not show up at the hearings, and his top aides also have rebuffed House requests for their testimony.

The acting chief of staff's legal filing Friday signals a shift in his approach toward the inquiry. Mulvaney is now attempting to join a lawsuit filed by officials who have signaled they would defy the White House and testify to Congress if so ordered.

In going to court, Mulvaney appears to have acted on his own, hiring a private attorney to intervene in the suit. Typically, the White House Counsel's Office and the Justice Department would be involved in legal matters regarding the White House chief of staff.

The White House did not respond to a request for comment.

Pittard said Mulvaney's legal action was necessary to get clarity from the courts at a time when he faces an order from the White House not to comply and threats of contempt from the House.

"He is genuinely caught between two conflicting orders." Pittard said. "He intends to follow the orders of his boss, the president, yet doing so has led to threats from the House. Asking the court to resolve a genuine conflict like this is not unreasonable in the least."

Pittard said White House Counsel Pat Cipollone was consulted before Mulvaney went to court and raised no objections. Mulvaney's legal filing, Pittard added, makes clear his action is aimed at the House, not the president.

"This is non-adversarial toward the president, and in no way indicates any distance between Mr. Mulvaney and the president," said a person close to Mulvaney, who spoke on the condition of anonymity to describe his thinking.

However, the suit Mulvaney seeks to join lists the president and House leaders as defendants.

The unusual legal maneuvering lays bare a deepening divide among top advisers to Trump as House impeachment investigators continue to gather evidence about the effort to pressure Ukraine to open investigations into his political opponents.

Mulvaney has acknowledged that he blocked releasing nearly $400 million in military aid to Ukraine at the president's request. In an October news conference, Mulvaney said he withheld the aid because of the president's interest in having Ukraine investigate a discredited theory that Ukrainians interfered in the 2016 campaign. Mulvaney later said his comments were misinterpreted.

If Bolton is ordered to testify, he is expected to corroborate the accounts of former aides - such as Lt. Col. Alexander S. Vindman and adviser Fiona Hill - who testified that Bolton was alarmed that military aide was being withheld from Ukraine as the president and his aides pushed that country to open investigations that could damage Democrats.

In a letter to House Democrats on Friday, Cooper wrote that Bolton was "personally involved in many of the events, meetings, and conversations about which you have already received testimony, as well as many relevant meetings and conversations that have not yet been discussed in the testimonies thus far."

Congressional investigators have not yet subpoenaed Bolton, though they have sought his appearance, a request Cooper said he would decline without a subpoena and an instruction from the courts.

In his letter Friday, Cooper emphasized that Bolton and Kupperman's testimony was particularly important and sensitive because of the role they played in national security matters.

"Information concerning national security and foreign affairs is at the heart of the Committees' impeachment inquiry, and it is difficult to imagine any question that the Committees might put to Dr. Kupperman that would not implicate these sensitive areas," he wrote.

He noted that Kupperman and Bolton could receive special immunity from testifying because they are part of "an exceedingly narrow category of aides entrusted with discretionary authority in such sensitive areas as national security or foreign policy."

Mulvaney's legal filing could breathe new life into the Kupperman suit after House lawyers withdrew their subpoena of him last week and asked for the case to be dismissed. Instead, the House said it would look to another case involving former White House counsel Donald McGahn, which is more advanced, as a key test case.

However, presiding U.S. District Judge Richard Leon declined to dismiss the Kupperman suit. Late Saturday afternoon, Leon ordered lawyers for Mulvaney, Kupperman, Bolton and the government to join him in a conference call Monday afternoon to discuss Mulvaney’s request and how to proceed.