Analysis: White House at war with itself even as it fights impeachment inquiry 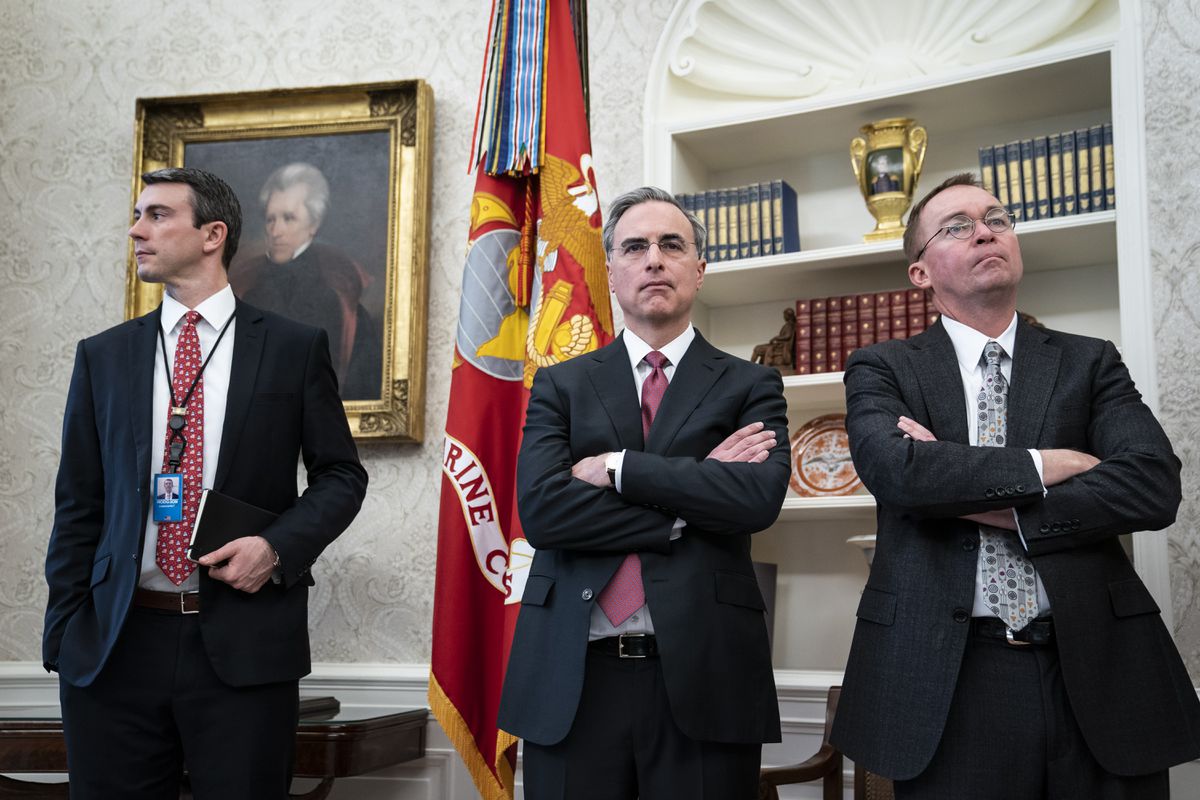 WASHINGTON - The White House’s bifurcated and disjointed response to Democrats’ impeachment inquiry has been fueled by a fierce West Wing battle between two of President Donald Trump’s top advisers, and the outcome of the messy skirmish could be on full display this week, according to White House and congressional officials.

Acting chief of staff Mick Mulvaney has urged aides not to comply with the inquiry and blocked any cooperation with congressional Democrats. Top political aides at the Office of Management and Budget, which Mulvaney once led, have fallen in line with his defiant stance, the officials said, speaking on the condition of anonymity to talk freely about the behind the scenes developments.

Mulvaney's office blames White House counsel Pat Cipollone for not doing more to stop other government officials from participating in the impeachment inquiry, as a number of State Department officials, diplomats, and an aide to Vice President Mike Pence, have given sworn testimony to Congress.

Cipollone, meanwhile, has fumed that Mulvaney has only made matters worse with his Oct. 17 news conference, when he publicly acknowledged a quid pro quo, essentially confirming Democrats' accusations in front of television cameras and reporters. Cipollone did not want Mulvaney to hold the news conference, a message that was passed along to the acting chief of staff's office, according to two senior Trump advisers, who spoke on the condition of anonymity.

A Mulvaney aide said a team of White House lawyers prepared him for the news conference and never said he should not do it.

"This will be the toughest political fight this White House has faced. They need to be sure they are totally-focused, and that all their fire is pointed outward - not at each other," said Michael Steel, a GOP strategist who was a top aide to former House speaker John Boehner, R-Ohio.

Complicating matters, on Friday, the same day he defied a congressional subpoena to testify, Mulvaney sought to join a separation-of-powers lawsuit filed against Trump and the House leadership by a one-time deputy to former national security adviser John Bolton. The move infuriated Bolton allies, The Washington Post has reported, partly because Bolton and other national security aides viewed Mulvaney as a key architect in pressuring Ukraine to launch political investigations on behalf of Trump.

Mulvaney's move to join the lawsuit baffled several administration officials, people familiar with the matter said. The lawsuit could have provided a legal basis for Mulvaney's refusal to testify in the impeachment inquiry, but he withdrew late Monday, saying he will file his own suit to ask the courts to decide whether senior Trump administration officials must testify in the impeachment inquiry.

The Office of Management and Budget has served as Mulvaney's biggest bulwark, because it played a key role in blocking nearly $400 million in security aide to Ukraine over the summer. The OMB is led by a close Mulvaney ally, acting director Russell Vought, who has refused to cooperate with the impeachment inquiry, as have other political appointees at the agency. But the increasingly political nature of the OMB has rattled a number of high-level career staffers, and several have resigned in the past year, including one who announced his departure in the midst of the turmoil this summer.

Employees at the normally under-the-radar budget agency watched in dismay as political appointees at the OMB took the highly unusual step of overruling the concerns of career staff to hold up the Ukraine military aid, according to multiple former agency officials who remain in touch with current employees and spoke on the condition of anonymity to protect career staffers.

"Everyone was freaked out because it so violated the norms of OMB," said one former longtime career employee, speaking on condition of anonymity to discuss private conversations. The impeachment inquiry now threatens to ensnare career staffers at OMB, one of whom, Mark Sandy, was called to testify Friday but failed to appear. A series of State Department and National Security witnesses have told impeachment investigators that the aid was held up as part of a quid pro quo to get Ukraine to announce investigations, including of Trump's Democratic rival Joe Biden, but OMB staffers could fill in key details of what took place.

The White House denied the existence of any internal tensions.

"We are one team and we work well together. The palace intrigue stories are false and they need to stop," White House press secretary Stephanie Grisham said in an email.

But Trump has complained about his legal team to White House officials and advisers in recent weeks, saying they need to be more aggressive and defend him more. Cipollone released a letter from Trump early last month saying the White House would not be cooperating with the impeachment inquiry. But a senior administration official said Cipollone since then has failed to do more to keep members of the administration in line.

"Those who have aligned with the president and followed the president's instincts on not to cooperate have been successful and been that firewall," said this official, who spoke on the condition of anonymity to discuss internal deliberations. Cipollone, this person said, "has been pretty weak in ensuring people are on lockdown."

At the same time, Trump has been complaining about Mulvaney, blaming him for his political troubles, and has toyed with the idea of replacing him, two officials said.

Another dispute between the Mulvaney and Cipollone camps emerged over the potential hiring of former congressman Trey Gowdy, R-S.C., to be part Trump's team defending against impeachment. Trump was looking for outspoken supporters and Mulvaney advocated for hiring his former House colleague and longtime friend Gowdy, a former federal prosecutor-turned-Fox News personality.

But Cipollone was opposed. And ultimately the Gowdy boomlet collapsed within a period of days last month as White House officials said federal lobbying rules could prevent him from starting until January.

Some administration officials complain that Cipollone has not kept Mulvaney and other White House offices in the loop on key decisions. Cipollone's office released the transcript of the president's July 25 call with his Ukrainian counterpart - a move that Mulvaney opposed, administration officials said. Neither the acting chief of staff nor some members of the White House press office knew ahead of time that was going to happen, the officials said.

Some Hill Republicans were not pleased and have accused Cipollone of being territorial behind the scenes. They wanted Gowdy, who led the GOP investigation of the Benghazi terrorist attack on the U.S. Consulate in Libya, to lead the cross-examination for Trump in the Senate - a role Cipollone is said to want for himself.

"Each wants to be in charge of impeachment," one Senate GOP aide said of the Mulvaney-Cipollone fight. "Cipollone seems more like he's protecting his turf than anything else . . . . He doesn't want any competition." The aide spoke on the condition of anonymity to freely describe private concerns.

Tensions between the two camps were inflamed when Mulvaney gave an Oct. 17 briefing to White House reporters and appeared to acknowledge the president sought to withhold the U.S. aid to Ukraine as part of a quid pro quo. Mulvaney said the administration did not release the security assistance to the country because the president wanted Ukraine to first agree to an investigation into corruption, and a discredited theory that evidence of Russia's interference in the 2016 election had been fabricated. Mulvaney later issued a statement insisting that he had not confirmed a quid pro quo and that reporters had misinterpreted his words, which were televised.

The divisions within the administration, at a time when it should be presenting a united front against House Democrats, are serious enough that they have caught the attention of Senate Republicans, who are concerned that the administration is not properly prepared for a Senate impeachment trial that could start in January. The House is expected to pass articles of impeachment against Trump as soon as December, triggering a trial in the Senate.

"This impeachment trial is going to be here before the White House knows it and they're not even remotely prepared for it," said the Senate GOP aide. "What they need desperately is leadership to get ready, but until Mulvaney and Cipollone put aside their petty squabbles and start working together all they'll have is tweets."

This aide said that GOP senators have been concerned that the White House was moving too slowly to hire staff specifically dedicated to working on the impeachment issue as the inquiry moves into its public phase. Multiple senators made this concern known to the White House, the aide said. Their concerns were finally alleviated last week with news that Pam Bondi, the former attorney general of Florida, and Tony Sayegh, a former Treasury Department spokesman, would join the administration to work on impeachment-related messaging and other issues.

“I think Pam Bondi will be very helpful,” said Sen. Lindsey Graham, R-S.C., adding that the Senate is unlikely to remove the president. “Things are better now, I think. Pam will do a good job. They still need to build their legal team out some.”