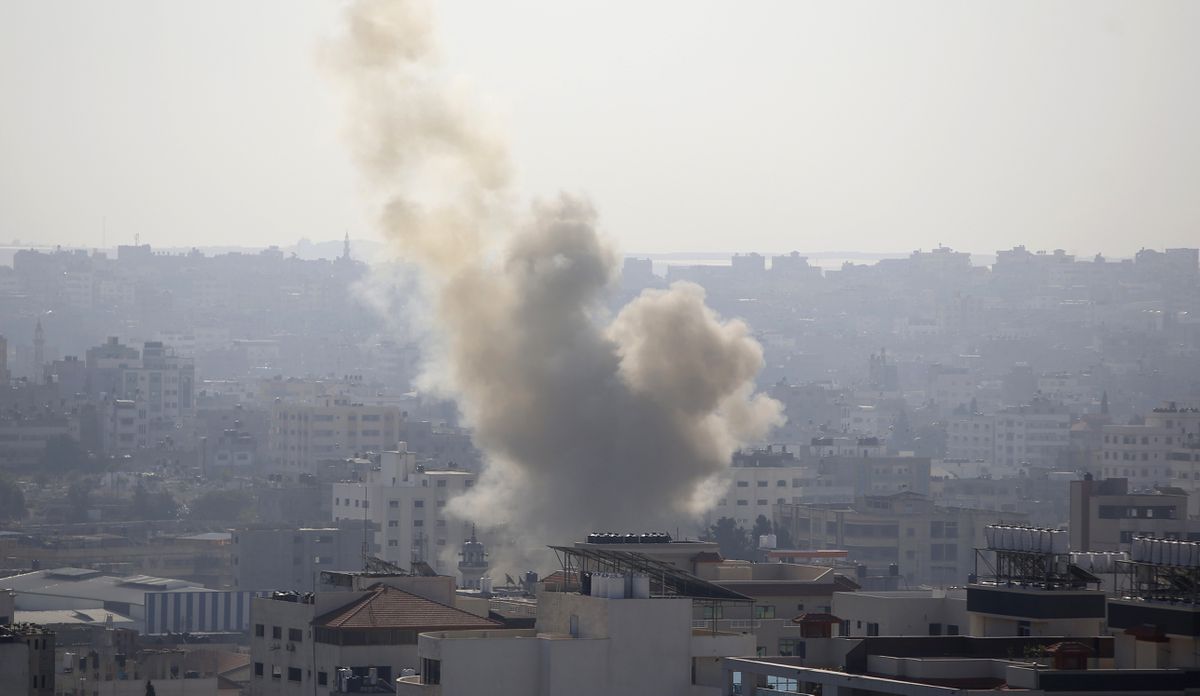 Smoke rises after an Israeli forces strike in Gaza City, Tuesday, Nov. 12, 2019. Israel killed a senior Islamic Jihad commander in Gaza early Tuesday in a resumption of pinpointed targeting that threatens a fierce round of cross-border violence with Palestinian militants. (AP Photo/Hatem Moussa)

Smoke rises after an Israeli forces strike in Gaza City, Tuesday, Nov. 12, 2019. Israel killed a senior Islamic Jihad commander in Gaza early Tuesday in a resumption of pinpointed targeting that threatens a fierce round of cross-border violence with Palestinian militants. (AP Photo/Hatem Moussa)

GAZA CITY, Gaza Strip — Israel launched airstrikes Tuesday against two senior commanders from the Palestinian militant group Islamic Jihad, killing one in Gaza but missing another in Syria in a sharp escalation of Israel’s regional conflict with Iran, which backs the militant group. The attack sparked an hours-long exchange of rocket fire from Gaza and further airstrikes, the worst bout of fighting there in recent months.

In eastern Gaza, the Israeli strike killed Bahaa Abu el-Atta and his wife. That set off a barrage of Gaza-fired rockets that reached as far as the Tel Aviv heartland, as the Islamic Jihad vowed further revenge. Israel's military said Abu el-Atta was the mastermind of recent attacks against Israel and was the militant group's top commander in Gaza. Three other Palestinian militants were killed in additional Israeli strikes.

Meanwhile, Syrian officials said an Israeli airstrike in the capital, Damascus, targeted another Islamic Jihad commander, Akram al-Ajouri, who was not harmed.

Amid the ongoing violence, Egyptian officials said Cairo was attempting to de-escalate tensions and had "opened channels" with the U.S. and the European Union. The officials spoke on condition of anonymity because they were not authorized to brief the media.

The sudden surge in violence looked to awaken Israel's increasingly open conflict with Iran and its proxies in the region. Iran supplies Islamic Jihad with training, expertise and money, though most of the group's weapons in Gaza are believed to be locally produced. Prime Minister Benjamin Netanyahu has issued a series of warnings recently about alleged Iranian aggression throughout the Middle East.

Netanyahu also has been criticized by residents along the southern border and political rivals for a tepid response to recent militant attacks. Netanyahu's Security Cabinet held a lengthy emergency meeting to discuss further action.

Afterward, speaking alongside military chief Lt. Gen. Aviv Kochavi, Netanyahu said Israel had no interest in escalation but would do everything necessary to defend itself against people like Abu el-Atta, whom he described as an "arch-terrorist" and "the main generator of terrorism from the Gaza Strip."

"He was in the midst of plotting additional attacks these very days. He was a ticking bomb," Netanyahu said.

The airstrikes come at a tenuous time politically for Israel, as Netanyahu leads a caretaker government after two inconclusive elections. His chief challenger, former military chief Benny Gantz, is currently trying to build a coalition government of his own. Gantz said he had been briefed on the airstrike in advance, calling it "the right decision," and Netanyahu updated his rival on developments later Tuesday, according to the prime minister's office.

A successful military operation could bolster Netanyahu as he seeks to hold onto power — especially if he is indicted on corruption charges.

Israel's attorney general is expected to make a decision in the coming weeks, and an indictment would increase pressure on Netanyahu to step aside. Netanyahu has sought to portray himself as the only leader capable of steering the country through its many security challenges.

The Gaza airstrike killed Abu el-Atta as he slept at home.

Lt. Col. Jonathan Conricus, a military spokesman, told reporters that Abu el-Atta was responsible for several recent attacks on southern Israel and was actively planning new ones. "We essentially over the last week have been waiting for the opportune moment to conduct this surgical strike," he said.

Conricus said the airstrike destroyed only the floor of the building in the Shejaeya neighborhood, in eastern Gaza City, to minimize "collateral damage."

Abu el-Atta's relatives and the Islamic Jihad said Abu el-Atta's wife was killed and the two wounded were their children.

The militant group said the 42-year-old Abu el-Atta was undergoing "a heroic act" when he was assassinated. Abu el-Atta's father said the Islamic Jihad commander had been in hiding in recent weeks fearing he would be targeted.

Minutes after the Iran-backed Palestinian group confirmed the death, a flurry of rockets was fired toward Israel. Air raid sirens continued to go off throughout the day as far as Tel Aviv. In one instance, a rocket landed on a highway, just meters (yards) from a passing vehicle. In another, a rocket pierced the roof of a residential home.

The military said more than 50 rockets were fired in just a few hours, with at least 20 intercepted by Israel's Iron Dome defense system. The Mada rescue service said two people were treated for shrapnel injuries.

In response, Israel shut down crossing points into Gaza and reduced the permissible fishing area off the territory’s coast to 6 nautical miles. Schools were closed, and people were instructed to stay home in communities stretching from the Gaza border all the way to Tel Aviv, about 55 miles away. Public shelters were opened and restrictions placed on large gatherings.

Islamic Jihad often carries out attacks independently of Hamas, the larger militant group that controls Gaza. Conricus described Abu el-Atta as a powerful figure in Gaza who often acts alone without instruction even from Iran.

Israel had no further plans to resume its assassinations of militant leaders — a practice that in the past has triggered heavy fighting. "There was no other choice," Conricus said.

But at midmorning, the army said it struck two Islamic Jihad militants from the group's rocket launching unit. It claimed a direct hit but gave no further details. The Gaza Health Ministry said one man was killed in the strike, with another dying later from his wounds. Islamic Jihad said they were members.

The attacks also come at a tense moment for Islamic Jihad's Iranian patrons, who are struggling under crippling U.S. sanctions.

Iran's regional influence is also being challenged by unprecedented, economically-driven mass protests in Iraq and Lebanon — two countries where Tehran wields major influence. The protests are creating unrest that Tehran fears would spark a backlash against Iran-backed proxy militias in those countries. Supreme Leader Ayatollah Ali Khamenei has accused the U.S. and its regional allies of fomenting the Iraq and Lebanon unrest.

In Damascus, a military official said Israeli warplanes fired three missiles toward the Syrian capital, with one being destroyed by Syria's air defenses before reaching its target.

The two others struck the home of al-Ajouri, the official said. Al-Ajouri's son and granddaughter were killed. A second man identified as Abdullah Yousef Hassan was killed and nine civilians wounded, the unidentified official said according to Syrian state-media.

An Associated Press reporter at the scene said the attack destroyed the three-story building in Damascus, located on a main highway about 50 meters (yards) across from the Lebanese Embassy.

Israel frequently strikes Iranian interests inside Syria and has carried out hundreds of airstrikes in the course of Syria's civil war, now in its ninth year. Tuesday's attack however was a rare assassination attempt of a Palestinian militant in the Syrian capital.

Just this week, Netanyahu appointed hard-line politician Naftali Bennett as Israel's new defense minister to fortify his political base. Bennett has long advocated tougher action against Palestinian militants. But Bennett only formally took office Tuesday and the military said the operation had been planned long in advance.

Netanyahu said the Cabinet approved the strike 10 days ago and waited for "a unique window of opportunity to carry out the operation in optimal conditions with maximum chances of success and minimum collateral damage."

The operation appeared to have wide backing despite the fraught political climate and Israel's ceremonial president, who has been working to establish a unity government between Netanyahu and Gantz, called for it not to enter the fray.

"We stand behind the security forces, who have been working for the success of this morning's operations for a long time," said President Reuven Rivlin. "This is no time for political squabbles."

Since Hamas took over Gaza by force in 2007 from the internationally backed Palestinian Authority, Israel and Gaza militants have fought three wars, with the third in 2014 lasting for 50 days.

Short-but-frequent spasms of violence have occurred, the latest earlier this month when about 10 projectiles were fired at Israel, which accused Abu el-Atta of being behind them.