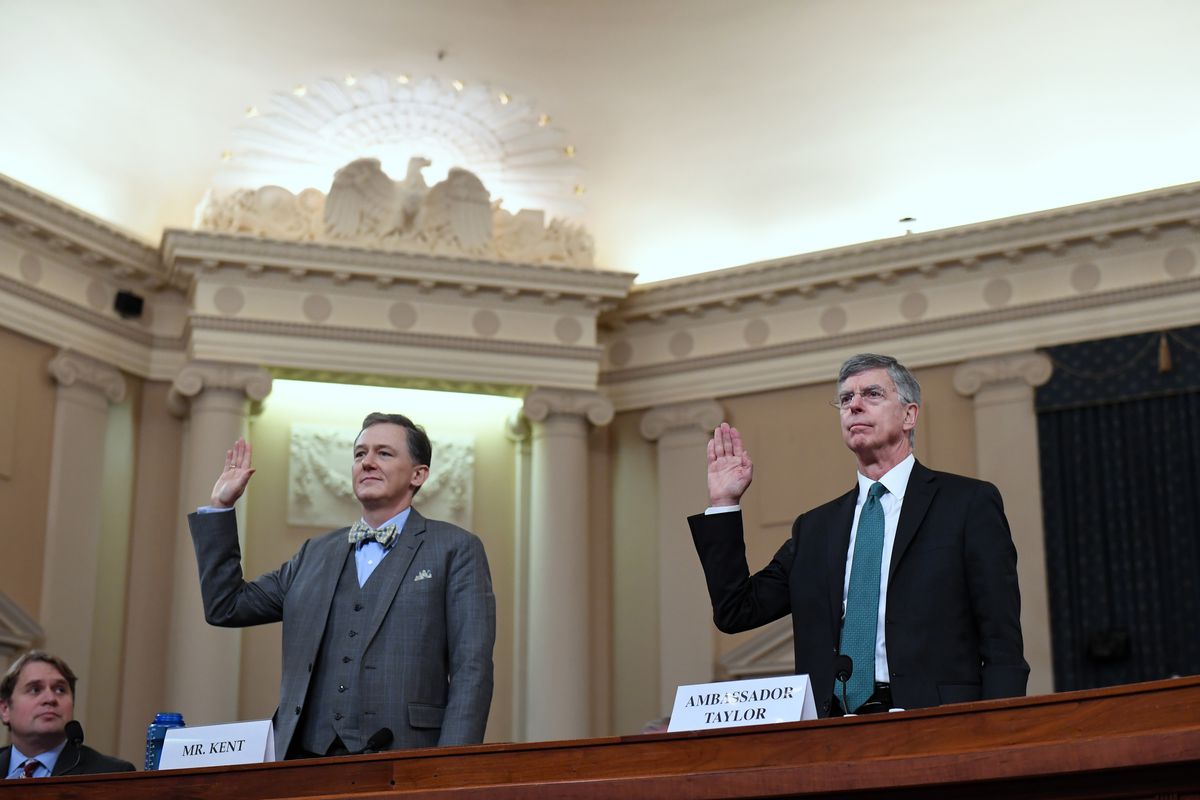 WASHINGTON - The question seemed to surprise William Taylor, a Vietnam veteran with decades of diplomatic experience.

Couldn't he "appreciate that President Trump was very concerned," asked the Republican counsel, that the Ukrainians were "out to get him?"

The lawyer was referring to a conspiracy theory, popular in parts of the political right, that while Democrats have focused on Russia's efforts to help Trump win the 2016 election, it was actually Ukraine that interfered during that campaign to help Trump's Democratic opponent.

Taylor paused, casting his eyes down as his lips curled into a grin. He declined to give credence to the claim. "I don't know the exact nature of President Trump's concerns," the witness answered.

For weeks, as the House's impeachment inquiry of Donald Trump has unfolded behind closed doors, two dueling narratives about the president's actions have remained distinct.

One storyline rests on a whistleblower complaint - corroborated by a string of named diplomats as well as the White House's own reconstructed transcript of a July phone call between Trump and his Ukrainian counterpart - about a shadow foreign policy to undermine conclusions about Russian interference in the 2016 election and damage one of Trump's 2020 rivals, former vice president Joe Biden.

The other, which has played out in conservative media and on Trump's Twitter feed, relies largely on conspiracy theories and cover stories - some of which have taken root in the farthest reaches of the Internet before percolating up to the Oval Office - about Ukraine's influence in the 2016 election and Biden's reasons for going after a Ukrainian prosecutor, who was widely viewed by Western powers as corrupt.

Those two divergent worlds collided on Wednesday in stark fashion with the start of the probe's public hearings.

For the first time, the competing claims found a shared audience in the same congressional hearing room, as Taylor appeared alongside George Kent, the senior State Department official in charge of Ukraine. The first two witnesses stood in for the public at large in encountering not just two different interpretations of the facts - but two separate sets of factual claims.

The competing information streams are epitomized by MSNBC and CNN, which have reported heavily on the impeachment inquiry, and Fox News Channel, Trump's favorite network. But those outlets and others trained their attention on the same scene on Wednesday - giving viewers from each world a rare glimpse into the other.

"The viewer encounters two competing sets of factual claims," said Brendan Nyhan, a political scientist at Dartmouth College. "I imagine it's quite bewildering,"

Questions on Wednesday by Republican members of the House Intelligence Committee ranged widely, with some seeking to defend the president by emphasizing that military aid to Ukraine, while stalled, was ultimately released. Others sought to discredit the witnesses by noting that they lacked firsthand knowledge of some of the events they described. The White House has moved to block witnesses with more direct knowledge of the president's dealings from testifying.

But questions by the Republican attorney, Stephen Castor, as well as by Rep. Devin Nunes of California, the House Intelligence Committee's top Republican, dwelled extensively on claims about Ukrainian interference in the 2016 election, and the perception by some of the president's allies that the nation's government sought to undermine then-candidate Trump.

Republicans pointed to an opinion article by Ukraine's ambassador to the United States, published in the summer of 2016, that criticized comments by Trump signaling the Republican nominee's openness to recognizing Russia's annexation of the Crimean Peninsula. And they highlighted information leaked during the campaign about Ukrainian business dealings by then-Trump campaign chairman Paul Manafort.

"Officials showed a surprising lack of interest in the indications of Ukrainian election meddling that deeply concerned the president at whose pleasure they serve," Nunes said.

Ukraine experts have dismissed the idea that the activities cited by Nunes and other Republicans are in any way comparable to the sweeping interference campaign pursued to Trump's benefit by the Kremlin. And at Wednesday's hearing, Democrats sought to pierce the GOP's reliance on these theories.

Daniel Goldman, who led the questioning for the Democrats, asked Kent about a cybersecurity firm called CrowdStrike, which exposed Russian intrusions into Democratic computers in 2016. Trump, contrary to evidence, seems to believe that the California firm was involved in hiding the compromised server in Ukraine and passing the blame to Russia.

"To be honest, I had not heard of CrowdStrike until I read this transcript on Sept. 25," Kent said, referring to Trump's mention of the company during his phone call with Ukrainian President Volodymyr Zelensky.

Asked whether there was any "factual basis" to support the claim of Ukrainian interference in the 2016 election, Kent replied, "To my knowledge, there is no factual basis, no."

His confidence, which echoes the conclusions of the intelligence committee that it was Russia that interfered in the 2016 race, did not stop Nunes from insisting on conspiracy theories about "Ukrainian election meddling." Nor did it prevent Castor from asking Taylor to affirm that there were "many facts that remain unresolved" about the 2016 election.

"I'm sorry, what's the question?" he sought to clarify.

The malleability of facts emerged as a broader GOP talking point. Rep. Mark Meadows, R-N.C., a Trump ally, affirmed as much to reporters in the Capitol on Wednesday. "I think what happens is, when we start to look at the facts, everybody has their impression of what truth is," he said.

Many of the president's most ardent supporters declined altogether to view the hearings as a legitimate source for facts. In some of the largest pro-Trump groups on Facebook, memes circulated exhorting users to boycott the hearing. "These impeachment hearings of our President will be nothing but one-sided showboating by the dems," read one graphic, posted in 212,000-member "Trump For President 2020" group. "Boycott it!"

The call was in line with messaging put out by conservative media. Breitbart called the hearing a "Snoozer." The Gateway Pundit complained in a headline that Taylor "Won't Stop Talking!"

Mike Rothschild, a researcher and author who specializes in debunking conspiracy theories, said coaxing the public not to watch would be effective for the people already prepared to line up behind the president. "But it seems a bit desperate," he added, born of an inability to "refute anything that the witnesses are claiming."

But there were probably many Americans, said Nyhan, the political scientist, who don't follow online news closely, and who may have been tuning in for the first time on Wednesday.

For these viewers, the narrative spun by Nunes would prove difficult to comprehend.

"Most Americans aren't watching Hannity every night," he said, referring to Sean Hannity, the Fox News Channel host and Trump confidant. "I can't imagine a normal person would understand what he's talking about."