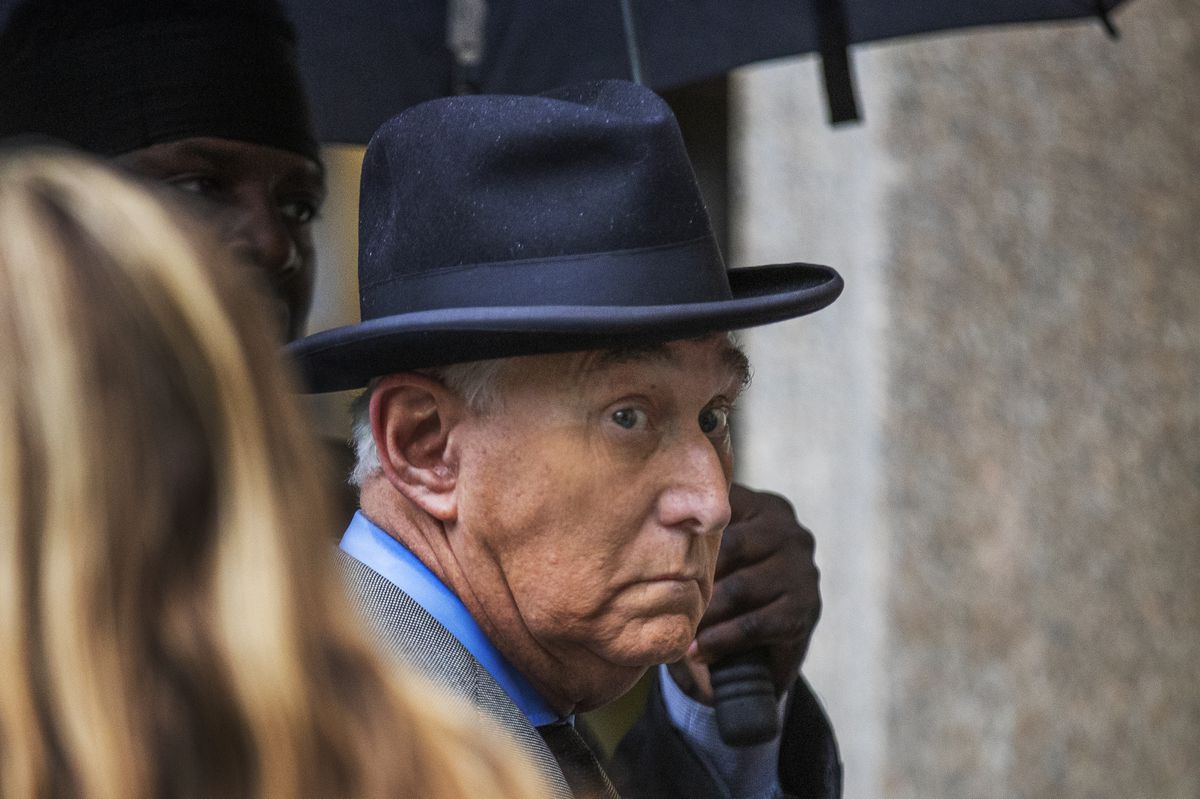 WASHINGTON - A federal jury has convicted longtime Trump confidant Roger Stone of lying to Congress and tampering with a witness about his efforts to learn about the anti-secrecy group WikiLeaks release of hacked Democratic emails in the 2016 U.S. presidential election.

The panel of nine women and three men deliberated for less than two days before finding Stone, 67, guilty on all seven counts resulting from his September 2017 testimony to a House intelligence committee investigating Russian interference in the 2016 election and the Kremlin's efforts to damage Trump's Democratic opponent, Hillary Clinton.

Stone, in a gray-blue suit, stood at the defense table with his left hand in his pants pocket, watching impassively as the verdicts were read. He sighed and frowned as he left the courtroom, offering a half-smile to reporters who had covered the proceedings while his wife hugged crying supporters.

Michael Caputo, a Stone friend, was kicked out of the courtroom for refusing to stand for the jury after the verdict and - when ordered to do so - turned his back to the panel.

Stone and his attorneys departed the courthouse without comment and went with their legal team into a waiting vehicle.

A judge set Stone's sentencing for Feb. 6 and allowed him to remain free until then. Stone faces a legal maximum penalty of 50 years in prison - 20 years for the witness tampering charge and five years for each of the other counts, although a first offender would face far less time under federal sentencing guidelines.

Stone's indictment was the last brought by special counsel Robert S. Mueller III, revealing important details about the Trump campaign's keen interest in computer files hacked by Russia and made public by WikiLeaks. He was accused of lying to Congress and tampering with a witness, an associate whom prosecutors said Stone threatened in a bid to prevent the man from cooperating with lawmakers.

Though prosecutors sought to prove only that Stone had lied to Congress, they asserted that his motive for the falsehoods was protecting Trump from embarrassment - and thus made the president and his campaign a key component in their case.

Trump seized on the verdict to take aim at a bevy of his own political opponents and law enforcement and intelligence officials who were involved in the investigation of his campaign.

"So they now convict Roger Stone of lying and want to jail him for many years to come. Well, what about Crooked Hillary, Comey, Strzok, Page, McCabe, Brennan, Clapper, Shifty Schiff, Ohr & Nellie, Steele & all of the others, including even Mueller himself? Didn't they lie?" Trump tweeted. "A double standard like never seen before in the history of our Country?"

The Justice Department inspector general has alleged former acting FBI director Andrew McCabe lied to investigators exploring a media disclosure in a case that is now being examined by federal prosecutors in Washington. But there seems to be no basis for Trump's suggestion that the other people he referenced could be accused criminally of lying.

Stone's trial re-energized discussions of Russian interference in the 2016 election and occurred alongside public hearings in Democrats' impeachment inquiry into whether the president tried to pressure his Ukrainian counterpart to investigate a potential 2020 opponent, former vice president Joe Biden. Sen. Chuck Schumer, D-N.Y., the highest ranking Senate Democrat, said the jury's decision "sends a powerful and timely message to President Trump and all House and Senate witnesses-past, present, and future-that lying to Congress, witness tampering, and obstruction of Congress are crimes and those who commit crimes do so at their own peril."

Prosecutors argued that Stone, who had been out on bond before and during his trial, should be jailed while he waits to be sentenced, though U.S. District Judge Amy Berman Jackson ultimately turned down that request.

Assistant U.S. Attorney Jonathan Kravis said Stone has "shown an unwillingness or inability to abide by the conditions of release the court has set for him," asserting that the now-convicted political operative had violated a gag order in the case as recently as Thursday night when he sent a message to Infowars radio host Alex Jones.

Defense attorney Bruce Rogow acknowledged that Jones claimed to have received a note from Stone, but he said it was unconfirmed. He said Stone "understands the gravity of the court's instructions" and would comply with them. In an unusual move, the judge said her gag order would remain in place, even though the trial is over.

Stone's political foes and those whose messages were hacked and released celebrated the conviction.

"Just about to take off on a long transatlantic flight in a middle coast seat. I think I will just sit back, relax, and enjoy it," former Hillary Clinton campaign chairman John Podesta wrote, affixing a link to an article about Stone being found guilty. Podesta's emails were hacked by the Russian government, and Stone famously predicted - before the emails were released - that it would soon be the Clinton campaign official's "time in the barrel."

Donna Brazile, the former chair of the Democratic National Committee, which also had its emails hacked, tweeted that she was "pleased with the guilty verdict of Trump ally and political adviser #RogerStone."

"Everyone who aided, exploited and used hacked, stolen DNC emails and other data from #WikiLeaks, should learn from this saga," she wrote.

In arguments and testimony over the past two weeks, prosecutors revealed a series of phone calls at critical times in 2016 between Stone, Trump and some of the highest-ranking officials on the Trump campaign - Steve Bannon, Manafort and Gates.

Gates and Bannon took the witness stand, describing how the campaign viewed Stone as a sort-of conduit to WikiLeaks who claimed - even before the Russian hacking was known - to have insider information. Gates testified to overhearing a phone call in which Trump seemed to discuss WikiLeaks with Stone, calling into question the president's assertion to Mueller's office that he did not recall discussing the organization with his longtime friend.

Prosecutors buttressed the witness testimony with call and message records, which they said helped show Stone's claims to the House Intelligence Committee were false.

In hopes of keeping Stone out of prison, his defense team urged jurors to treat his case as a referendum not on him but on Mueller's entire Russia investigation.

Stone's attorneys conceded that a raft of emails, texts and extensive other documentation showed him claiming inside information on WikiLeaks' releases and wanting to get even more that could be relayed to the Trump campaign. But in its closing, the defense urged jurors to reframe the question from whether Stone lied to whether that issue mattered, asserting that his hectic efforts to get information from WikiLeaks never amounted to anything.

"So much of this case deals with that question that you need to ask . . . so what?" Rogow asked.

Stone's defense repeated his position that there was "no collusion" with Russia on the presidential race and thus any of Stone's misstatements, as his attorneys cast them, about his WikiLeaks pursuits were inconsequential. They portrayed their client as hapless and merely engaging in his usual political chicanery. Stone has played on the dirty edge of politics for decades and was first investigated by the FBI during Watergate.

"There was nothing illegal about the campaign being interested in information that WikiLeaks was going to be sending out," Rogow said.

The attacks prompted a passionate defense from prosecutors - of Mueller's probe and of the importance of facts.

"If that's the state of affairs that we're in, I'm pretty shocked. Truth matters. Truth still matters," Assistant U.S. Attorney Michael Marando told jurors. "I know we live in a world nowadays with Twitter, tweets, social media where you can find any view, any truth you want." But in "our institutions of self-governance, to a congressional committee, in our courts of law, truth still matters."

While Stone maintained that none of his WikiLeaks outreach was successful, prosecutors suggested that was not so certain. They pointed to an email from writer and Stone acquaintance Jerome Corsi, saying: "Word is friend in embassy plans 2 more dumps. . . . Impact planned to be very damaging."

Corsi referred to WikiLeaks founder Julian Assange, who had been living under house arrest at the Ecuadoran Embassy in London since 2012.

Corsi says he rejected a plea offer from the special counsel and was never charged with a crime. He has denied having any contact with WikiLeaks, saying as Stone did that he was guessing based on Assange's public statements.

Stone did not testify during the trial, which began with jury selection Nov. 5. Instead jurors saw videos of his television appearances and heard scratchy audio of his appearance before the House committee.

The defense argued that Stone's voluntary testimony, in which he offered to follow up with more details about a journalist he described as his sole intermediary with WikiLeaks, showed his guilelessness. "This was not the voice of a man who was trying to lie, to mislead," Rogow said.

But jurors also saw texts in which Stone used vulgarity and threats to pressure that person, comedian and talk show host Randy Credico, to back up his version of events.

Kravis read some of those quotes to the jury and asked: "Are these the words of a man who believes he told the truth?"

Stone's reputation as a dirty trickster who courts attention, good or bad, left him a fringe figure in the Republican Party until his friend Trump ran for president.

"Roger is an agent provocateur," former Trump chief strategist Bannon told jurors, as he testified for the government about Stone's exchanges with him over WikiLeaks' contact and the campaign's interest. "He's an expert in the tougher side of politics." Trump was such a long shot, Bannon said, that the campaign had to "use every tool in the toolbox."

Stone himself explained his philosophy in a clip from his House testimony played for jurors. Quoting the writer Gore Vidal, he said, "Never pass up an opportunity to have sex or appear on television."

Not one juror smiled.