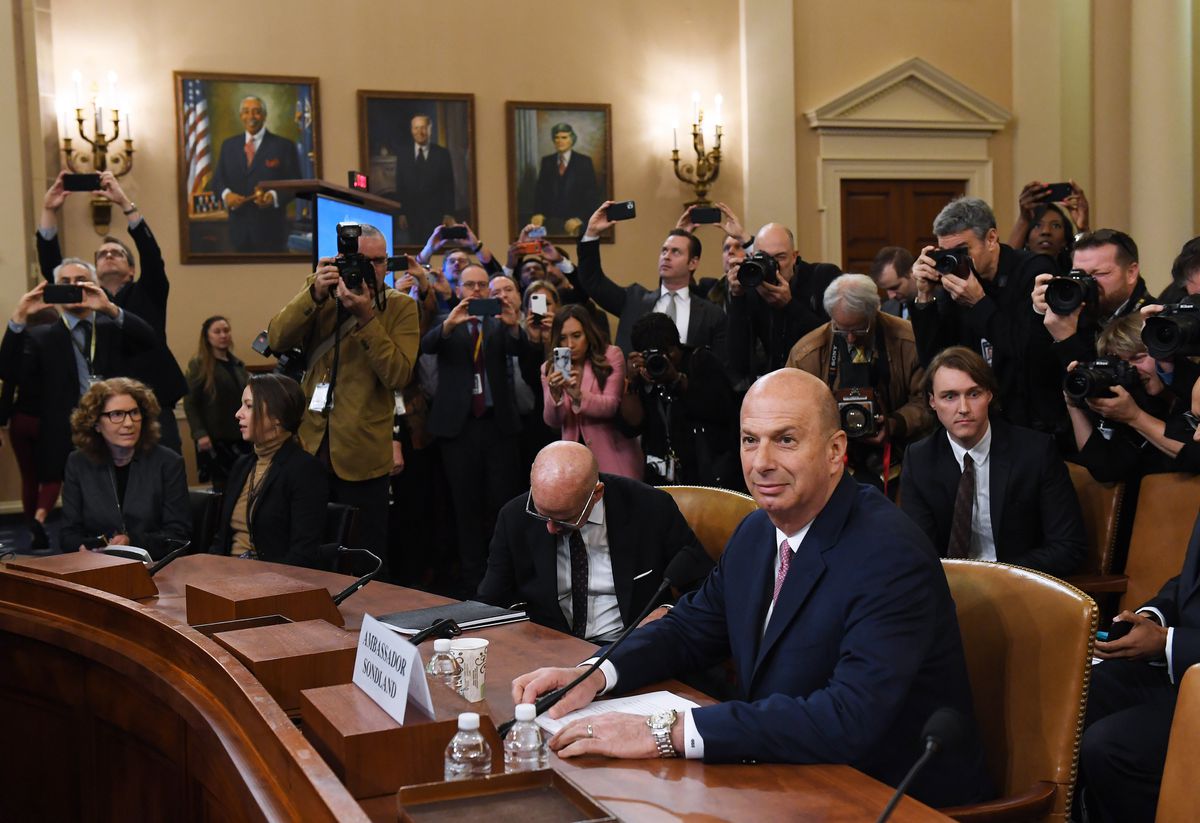 WASHINGTON — Vice President Mike Pence was informed just before meeting with the president of Ukraine in September that a U.S. ambassador believed that stalled military aid to Ukraine would probably not be released until Ukraine agreed to announce political investigations sought by President Donald Trump, the ambassador testified Wednesday.

Gordon Sondland, the U.S. ambassador to the European Union, told the House Intelligence Committee that he informed Pence of his fears just before Pence met with Ukrainian President Volodymyr Zelensky in Warsaw on Sept. 1, a meeting where Sondland anticipated that Zelensky was likely to ask about frozen U.S. aid.

The testimony is the first indication that Pence may have known that congressionally appropriated funds for security assistance was conditioned on a foreign power agreeing to open investigations to assist Trump's political prospects. The Ukrainians were being pressured to announce probes into Burisma, a gas company that hired former vice president Joe Biden's son, and a debunked assertion that their country interfered in the 2016 campaign, according to congressional testimony and text messages.

Sondland's account was immediately disputed in statement by Pence's chief of staff, Marc Short, who said that Pence "never had a conversation with Gordon Sondland about investigating the Bidens, Burisma, or the conditional release of financial aid to Ukraine based upon potential investigations."

He said that Sondland was "never alone" with Pence on the Poland trip and that the alleged conversation "never happened."

In an interview with The Washington Post, Short added that he attended the group meeting involving Pence and Sondland in Warsaw, and that Sondland "never raised investigations in any way."

Short also said that neither Trump nor anyone in the administration ever linked a desire for investigations in Ukraine with delays in foreign aid when speaking with the vice president.

Pence told a reporter for a local ABC station in Wisconsin later Wednesday that he "had no recollection of any discussion" with Sondland before the Zelensky meeting, according to a tweet from the reporter who conducted the interview.

The new allegation regarding Pence comes as Sondland testified that he was not freelancing as he made clear to Ukrainian officials that they needed to announce the opening of the investigations Trump sought to get assistance.

Instead, he testified, he was acting at the direction of the president and with the knowledge of senior officials, including the secretary of state and White House chief of staff.

Sondland's testimony is likely to raise pressure on Pence to directly answer questions about what he knew of the pressure campaign, a move that the vice president has so far resisted.

An aide to Pence, Jennifer Williams, testified Tuesday that Pence had accepted a personal invitation from Zelensky to attend his inauguration in May and that preliminary plans were underway for the Kyiv visit. On May 13, however, that she was told Trump had directed Pence not to attend, Williams testified.

The direction came as Trump was complaining to other aides that he believed the Ukrainians were out to get him and directed that U.S. diplomats interested in Ukraine should work with his personal attorney, Rudy Giuliani, who was advocating the political investigations.

Williams also testified that a rough transcript of Trump's call with Zelensky on July 25, in which Trump explicitly asked Zelensky to have Ukraine open an investigation into Biden, was placed in Pence's briefing materials on the night of the call. She said she did not know if he read the document.

Sondland testified Wednesday that there had been an explicit "quid pro quo" between the announcement of the investigations by the Ukrainians and a White House meeting that Ukraine's newly elected president deeply wanted to help legitimize his new administration.

By the time of the Warsaw meeting, Sondland said he had become convinced that security aid, too, was riding on the Ukrainians announcing the opening of the investigations.

Pence was a last-minute addition to the meeting, after Trump, who had been scheduled to attend, canceled because of Hurricane Dorian.

Sondland told Congress that he knew that Zelensky was likely to raise the frozen military assistance with Pence, and to be sure the vice president was fully briefed, he informed Pence of his fears before the meeting.

"I mentioned to Vice President Pence before the meetings with the Ukrainians that I had concerns that the delay in aid had become tied to the issue of investigations," he testified.

Sondland testified that Pence did not respond to the comment.

"He heard what I said," Sondland testified, adding, "I don't recall any substantive response."

Short's statement did not address whether Pence knew Trump was asking for the investigations.

Williams has said that at a formal briefing session for the vice president before the meeting with Zelensky, nobody mentioned Trump's desire for investigations into 2016 or Burisma, a Ukrainian company whose board included Biden's son Hunter Biden.

She and Sondland both testified that when Pence met with Zelensky, the Ukrainian president opened the meeting by asking about the frozen military aid.

Pence did not mention Trump's desire for the investigations but rather said only that Ukraine had unwavering support from the United States and that he would raise the issue with the president, according to testimony from Williams and others.

But after the meeting, Sondland testified that he pulled Zelensky's top aide aside and gave him an explicit message: Sondland said that he did not believe the money would flow again until Ukraine made a public statement about the investigations.

What they discussed is not clear.

Acting ambassador to Ukraine William Taylor testified that he learned Zelensky planned to use an interview on CNN to announce the investigations that Trump sought. He urged Ukrainian officials not to make such an announcement.

Soon, senior Republican senators began complaining to the White House about the frozen money. Media reports began questioning whether the assistance was being tied to the investigations. And then the White House learned that a whistleblower had filed a complaint alleging that the president may have abused his power in pressuring Ukraine.

On Sept. 11, the military assistance was released without the Ukrainians announcing the opening of any investigations.

Video: U.S. Ambassador to the European Union Gordon Sondland said President Trump wanted the Ukrainian president to publicly commit to investigating the Bidens during an impeachment hearing on Nov. 20.(The Washington Post)