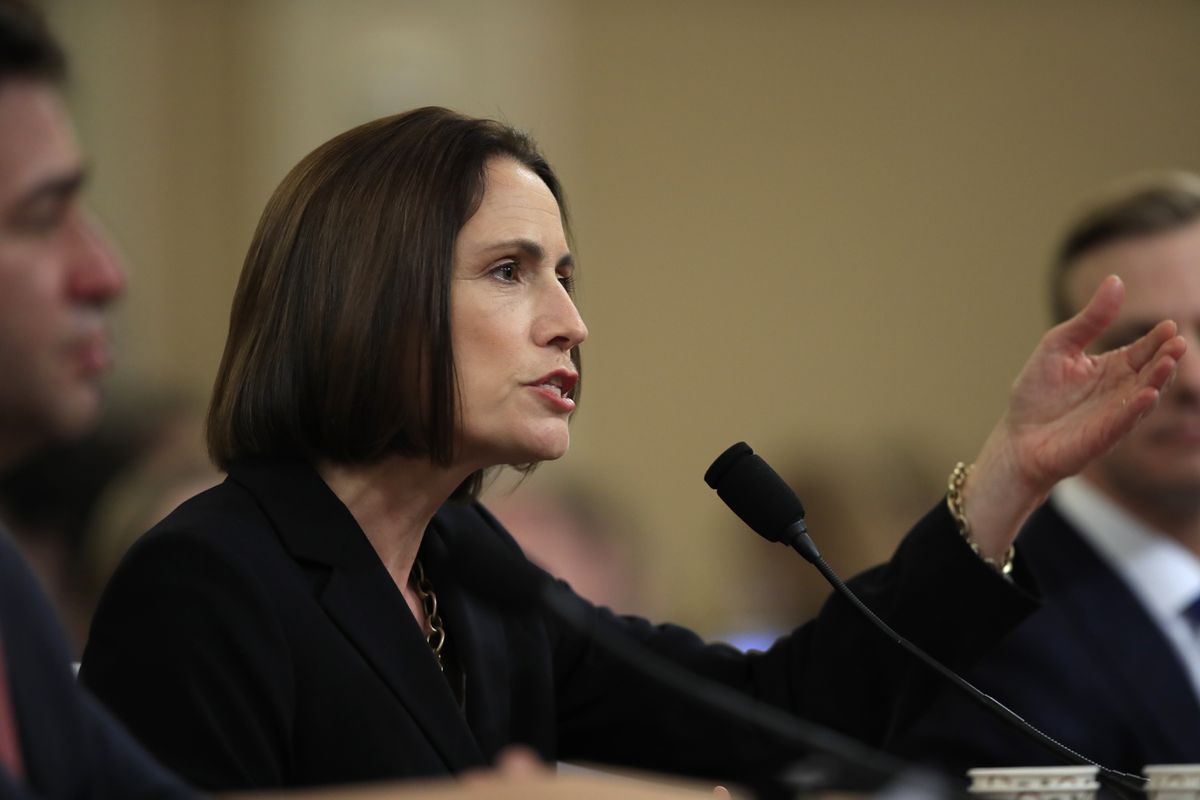 WASHINGTON - For two months, the impeachment inquiry has focused on President Donald Trump and whether he abused the power of his office for his own political advantage.

On Thursday, the inquiry seemed to broaden into a bracing examination of the insidious forces - including the spread of conspiracy theories - infecting American politics.

The final day of public testimony in this phase of the impeachment investigation was dominated by the warnings of a former White House adviser that the country's susceptibility to baseless allegations and partisan infighting are more than unfortunate byproducts of this political era.

Instead, Fiona Hill, who served as Trump's top adviser on Russia for much of the past two years, testified that these tendencies pose a growing security threat that Russia, among other adversaries, is exploiting.

As a result, Hill emerged as one of the few witnesses over the past two weeks able to move from providing accounts of events inside the White House to placing the unfolding Ukraine scandal in a broader political context.

She depicted Trump's alleged attempt to pressure Ukraine for political dirt as harmful to both countries' security interests. She voiced dismay about the treatment of diplomats, including the former U.S. ambassador to Ukraine, who were either sidelined or disparaged for their efforts to defend official U.S. policy or testify about the president.

But above all, she spoke with palpable concern about the extent to which partisanship in the United States' political system has weakened the country's ability to agree on objective reality. "Our nation is being torn apart," she said. "Truth is questioned."

A respected Russia scholar who previously served as a top U.S. intelligence official, Hill opened her testimony with a bristling rebuke of Republican lawmakers - and by extension Trump - who have sought to sow doubt about Russia's interference in the 2016 U.S. election.

"Some of you on this committee appear to believe that Russia and its security services did not conduct a campaign against our country - and that perhaps, somehow, for some reason, Ukraine did," Hill said. "This is a fictional narrative that has been perpetrated and propagated by the Russian security services themselves."

Her comments turned the tables on lawmakers, including Rep. Devin Nunes, R-Calif., who have pressed previous witnesses on perceived holes in their testimony, but found themselves using portions of their allotted time Thursday to dispute Hill's characterizations.

Nunes held up a copy of a House Intelligence Committee report on Russian interference, insisting that he and other members do not question the core case against the Kremlin.

In reality, Nunes has been among Trump's staunchest allies on Capitol Hill in seeking to discredit or impede the FBI and special counsel investigations of Russian interference. He has repeatedly used the impeachment hearings over the past two weeks to argue that Trump's suspicions about Ukraine working against him in 2016 were warranted.

And he spent much of his time Thursday questioning Hill not about what she witnessed about the campaign to pressure Ukraine but her contacts with individuals - including former British intelligence officer Christopher Steele - connected to those now concluded investigations of Trump and Russia.

The exchange underscored the extent to which the impeachment probe has become an extension of the political battles that began in the aftermath of the 2016 election, as it became clear that Russia had waged an audacious "active measures" operation - involving the hacking of Democratic Party computers and the bombardment of U.S. voters with disinformation on social media platforms - to help elect Trump and defeat Hillary Clinton.

Trump has refused to accept that Russia's interference was real, which officials close to him say he sees as a stain on the legitimacy of his presidency. Trump's alleged attempt to pressure Ukraine appears to have been driven at least in part by his desire to solicit information he hoped would help to cast doubt on the case against the Kremlin.

In addition to asking Ukrainian President Volodymyr Zelensky to pursue investigations into the family of former vice president Joe Biden, Trump also sought to enlist the Ukrainian leader in advancing a conspiracy theory that one of the Democratic Party's computer servers was smuggled to Ukraine to hide evidence that Ukraine rather than Russia had hacked its network.

Trump's allies in Congress have largely dismissed this allegation as fiction. But they have nevertheless used the impeachment hearings to advance murkier claims that Ukraine sought to undermine Trump in the 2016 election.

Hill treated such claims with scorn. "I refuse to be part of an effort to legitimize an alternate narrative that the Ukrainian government is a U.S. adversary, and that Ukraine - not Russia - attacked us in 2016," she said.

There are indications that at least one Ukrainian politician expressed support for Clinton in 2016 on social media. And Ukrainian officials were involved in exposing the corruption of then-Trump campaign chairman Paul Manafort, who is now serving a prison term on fraud charges related to millions of dollars he received for consulting work in Ukraine financed by political operatives close to the Kremlin.

But Hill and others have said there is no evidence that the Ukrainian government interfered in the U.S. election of 2016, let alone did so on the scale of Russia.

Other witnesses have also railed against Trump and his allies' use of conspiratorial claims and false allegations to undermine perceived adversaries or advance their political agendas.

George Kent, a senior State Department official responsible for Ukraine, testified that Trump's lawyer Rudy Giuliani had waged a campaign "full of lies and incorrect information" against former U.S. ambassador to Ukraine Marie Yovanovitch, who was removed from that post amid a smear campaign involving right-wing publications.

Hill's testimony was remarkable in part because of her senior role inside the White House. She pushed to maintain a harder line against Russia even as Trump often prevented her from attending meetings, resisted measures that he worried might anger the Kremlin, and sided with Russian President Vladimir Putin over the conclusions U.S. spy agencies.

Putin made clear this week that he is relishing the political skirmishing in Washington over Ukraine, which has for five years relied on U.S. aid to help fend off Russian aggression.

As the impeachment hearings played out, Putin joked: "Thank God no one is accusing us of interfering in the U.S. elections anymore."

Though pointed in some of her exchanges with GOP lawmakers, Hill was at other moments disarming.

At one point, she listened as Rep. Brad Wenstrup, R-Ohio, delivered remarks in which he mixed references to his patriotism and service as a U.S. Army surgeon in Iraq with claims that Ukraine "did work against candidate Trump;" that the FBI had sought to "entrap members of the Trump campaign;" and that the impeachment inquiry was driven by government officials disappointed that Trump won.

Rather than challenge those dubious assertions, Hill described his statements about patriotism and service as "eloquent," and noted that she saw herself as a nonpartisan person who had agreed to serve in the Trump administration - despite efforts by many of her peers to dissuade her - out of a similar desire to serve her adopted country. Hill, a naturalized U.S. citizen, is originally from England.

"We need to be together again in 2020," Hill said. "So that the American people can make a choice about the future and vote in a presidential election without any fear that it is being interfered with in any quarter whatsoever."

It was a rare moment of decorum in an exchange between Republicans and witnesses before the impeachment inquiry. "We're just fact witnesses," Hill said. "We're just here to provide what we know and what we've heard."

After she was finished speaking, Wenstrup appeared to nod toward Hill appreciatively.